You’re on top of 1,234 meters, and below, as on the palm of your hand, almost the entire southern coast of Crimea. Ai-Petri is the most visited place in Yalta. In summer there are always a lot of tourists, who stay until sunset to admire the night lights of the peninsula.

There are several ways to get here. The simplest and the fastest way is to use the cableway “Miskhor-Ai-Petri. It takes 15 minutes to get to the observation point. Second variant: you can get there by car or by a minibus along a steep serpentine hill. The way is not simple but very beautiful. Those who are confident in their abilities and a bit extreme climb to the top on foot along specially equipped trails.

On the plateau there are cozy cafes, and you are advised to order a shashlik or lagman. There is a small but colorful market selling sweets, tea, souvenirs and warm stockings made of sheep skins.

About 230 million years ago this place was the bottom of the sea. Ai-Petri at that time – a huge coral reef. The water began to recede about 2 million years ago, after which the tops, which are called “Teeth of the Dragon,” became visible. Since then, the mountain looks as it does now.

In Greek, “Ai-Petri” is translated as “Saint Peter. During the Middle Ages, there was a monastery in the valley that bore this name. As such, the monastery did not survive, only ruins remained.

“The highest points of the mountain are called Dragon’s Teeth. Photo: globallookpress.com On the plateau you can see the huge white balls are radio-transparent shelters, inside which the antennas of radars rotate. Photo: globallookpress.com Ai-Petri protects the southern part of Crimea from winds, while it itself is considered the most windy and foggy place on the peninsula. Photo: pixabay.com

It is listed in the Guinness Book of World Records. Between the middle and upper stations stretches the longest unsupported span in Europe, its length is 1679 meters. The length of the entire road is 2980 meters.

READ
The Golitsyn Trail, Space, Heaven and Hell in the New World

On the way to Ai-Petri, the highest waterfall of Crimea, Uchan-Su, is worth seeing. Its height is 98,5 meters. It often dries up in summer and sometimes freezes in winter, so you may appreciate its beauty in Autumn or Spring.

Just above the waterfall is the Silver Gazebo, a beautiful and romantic place. It is so called because from late fall to spring is covered with frost, the sun seems that it is silver.

For extreme tourists directly over the abyss between the merlons of Ai-Petri, stretched a suspension bridge. Before you go over it, you will be instructed and asked to fasten a safety rope. The bridge is rope-like, it wobbles rather strongly in the wind. Would you dare?

Ai-Petri at different times of the year

In summer, there are always a lot of tourists on Ai-Petri, and there are often lines for the cable car. The ideal time for walks on the plateau is autumn, when there is no heat, but there is little precipitation, no risk that the trails will be flooded or washed away.

In winter, you can take a sleigh pulled by huskies on the plateau. There are slopes for skiers and snowboarders. Even wanted to make a year-round ski resort, but because of the warm climate the idea was abandoned.

Elevator works on the track “26 kilometer”, its length is 600 meters. There is no special training of the track, which is the most suitable one for skiing. You can approach the track from the Bakhchisarayskoye highway. The descent is approximately 5 kilometers from the weather station.

Kichkine track has two short descents: 320 and 450 meters. The descent is 1.2 kilometers from the weather station along the Bakhchisaray highway. In wintertime Ai-Petri is threatened by avalanches, so it is prohibited to travel there.

In spring there is still snow, but the sun shines and trees blossom. It is very beautiful and you can breathe in a special way. Waterfalls are gathering force and mountain streams turn into fast rivers.

Where to make a beautiful photo 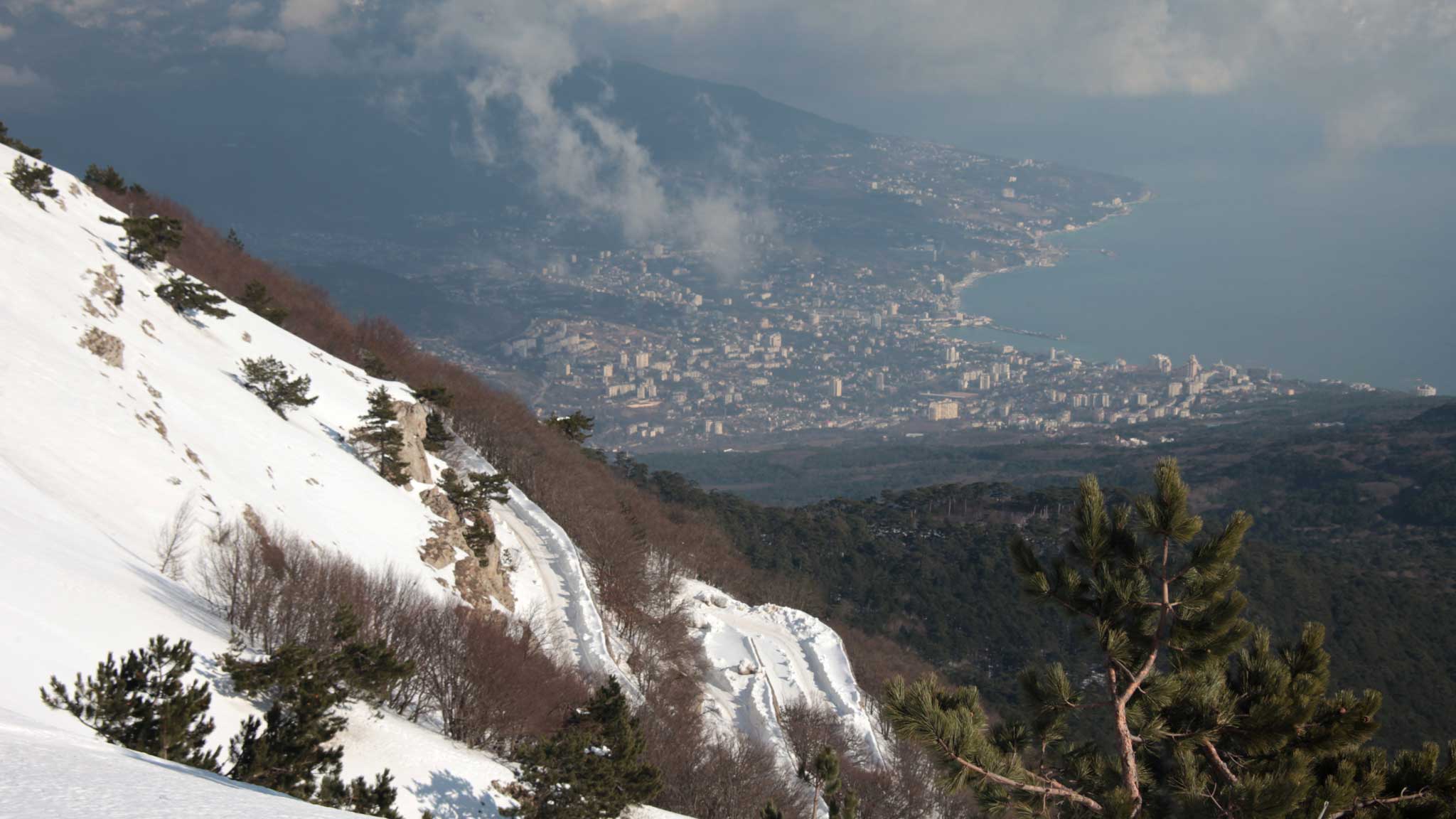 The mountain offers a stunning view of the city, do not miss the opportunity to take a photo against its backdrop. Photo: Ludimla Semova

The most unusual photos are obtained on the bridge over the abyss. Especially if you are caught in the fog, you will only be in the frame standing on the wooden planks of the suspension bridge. And all around is a white canvas. Friends will surely appreciate your courage and a beautiful photo.

Good places for selfies are at the platform near the cable car station, as well as on the observation deck, which offers a beautiful view of Yalta and the Yalta Bay. 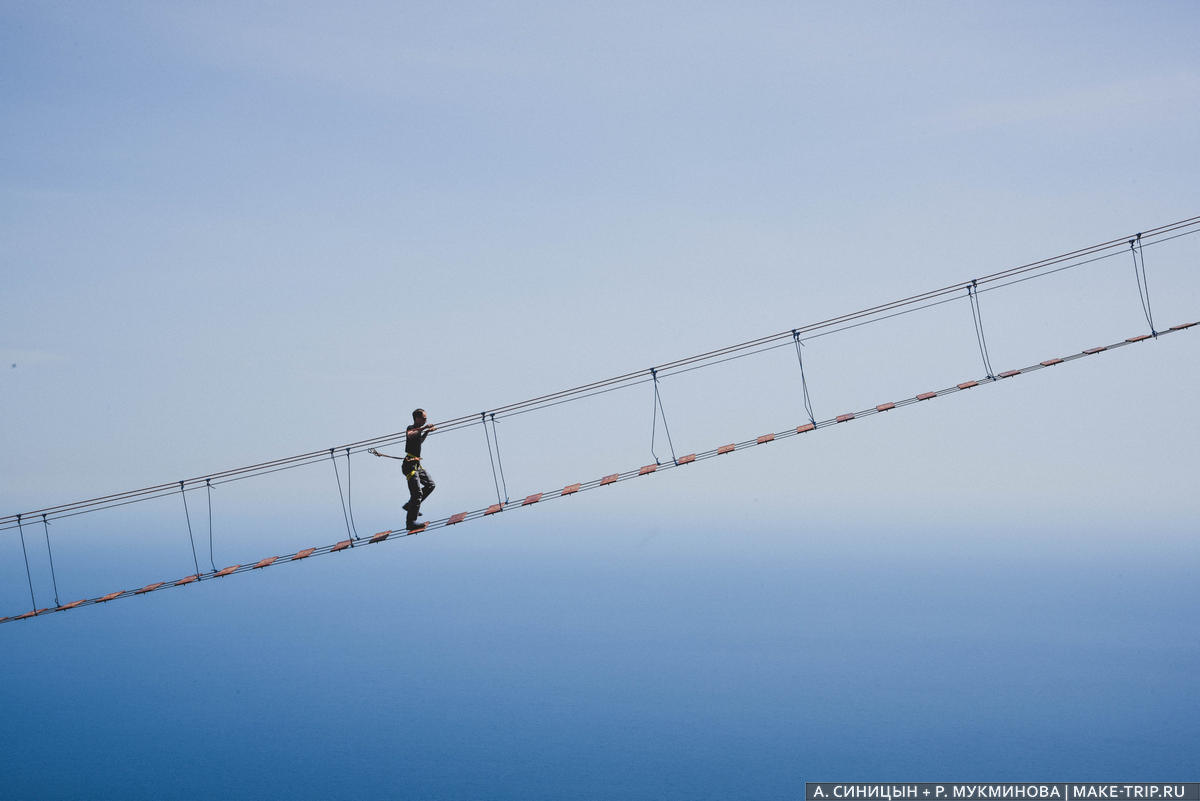 Find out if Ai-Petri is worth visiting and what you can see at the top. We tell you about the cable car, shuttles, excursions, cabs and other ways to get to the top.

Tripster and Sputnik8 – tours in Yalta.

Ai-Petri is a very famous and popular attraction of Crimea. Its height is 1234 meters above sea level. Its slopes and cogs can be admired if you rest in the resorts of Greater Yalta. From the top you can admire the coast. But the view from the cliff is not all there is up there.

I think that everyone who comes to the Crimea, at least once, should visit Mount Ai-Petri. I’ve been there twice – and I’m going to the third. I like the wind at the top, fluttering my hair, swooping clouds and fog, massive Pallas pines and, of course, breathtaking views. 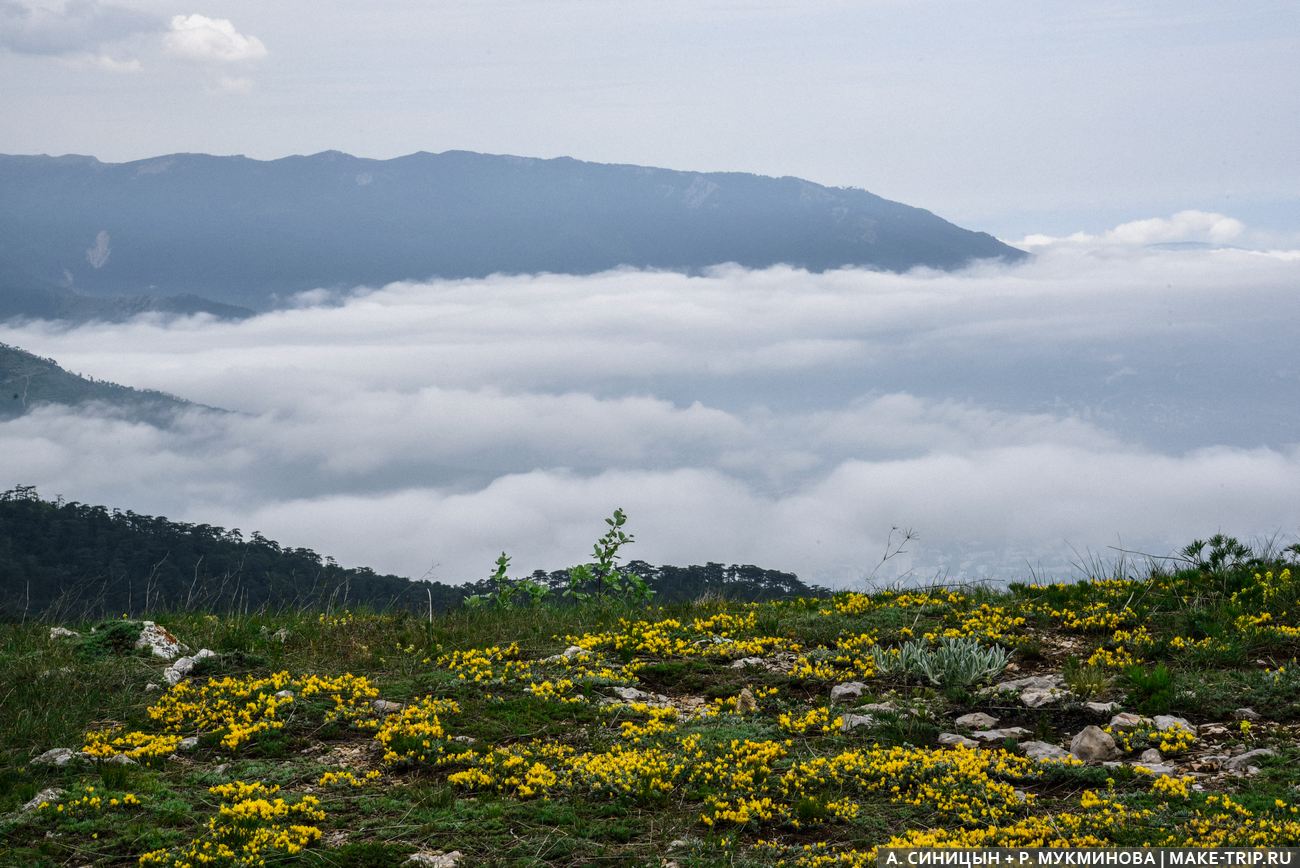 Ai-Petri has very changeable weather: first there are fogs and drizzling rain, then the sun shines brightly.

READ
Sandy beaches of the Crimea - 12 best beaches for recreation

What to see and do on Ai-Petri

Climb up to the bison. The pass to the peaks begins from the upper station of the cableway. It seems that you had to pay 100 rubles for it, but at our visit, the entrance was free. The ascent is simple: first the trail goes through a picturesque forest, past a thousand-year-old yew tree, and then along the rocks. Careful, they are slippery – be sure to walk in sneakers. At the end, you’ll come to the suspended bridges connecting the cogs. 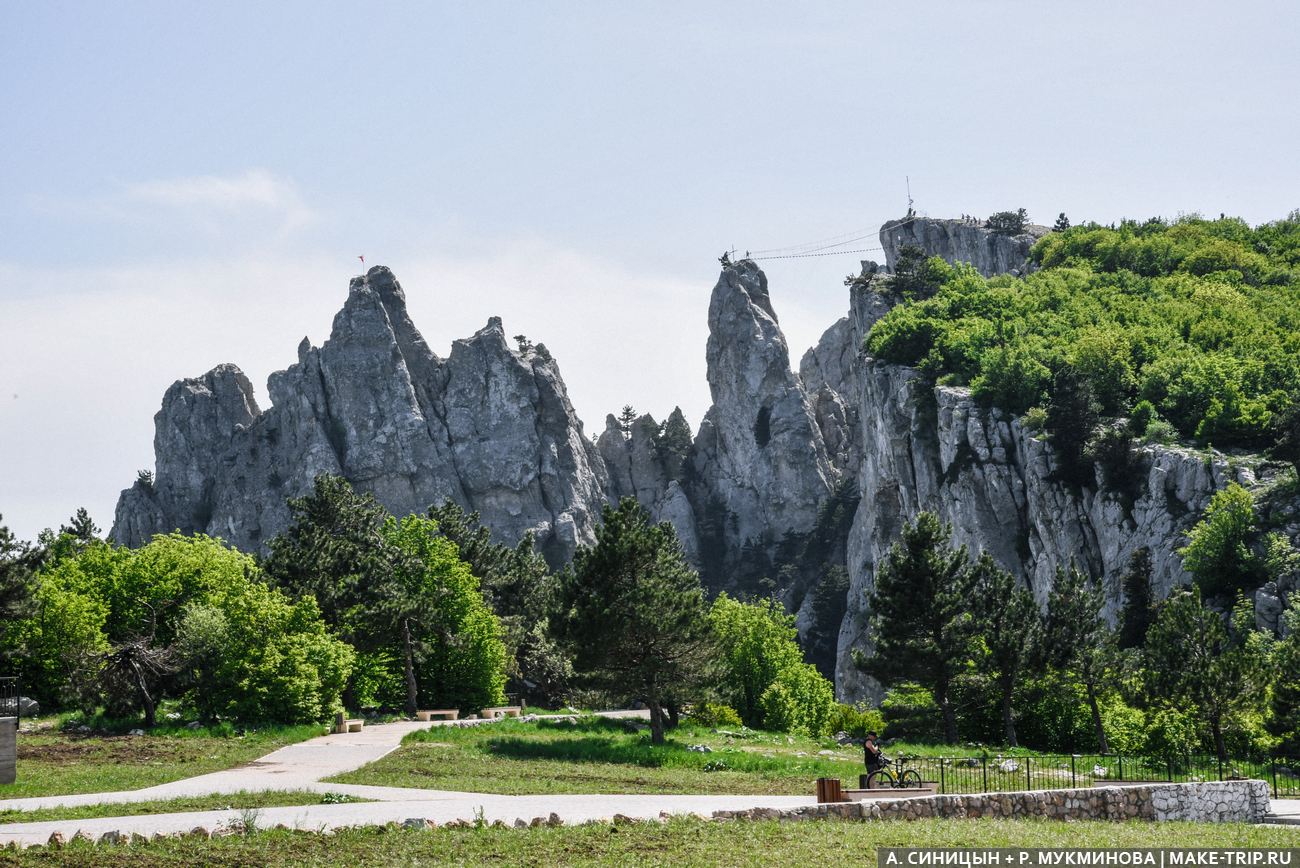 This is what the cogs look like from a distance. If you look closely, you can see the thin strands of the suspension bridge on the right.

Walk over the abyss. It costs 500 rubles to tickle the nerves and walk over the abyss on the suspended bridges. Our editor-in-chief Alexey Sinitsyn ventured, but I did not dare. If you are not sure of yourself – better not to go. We witnessed a girl panicking halfway down and never moving again. 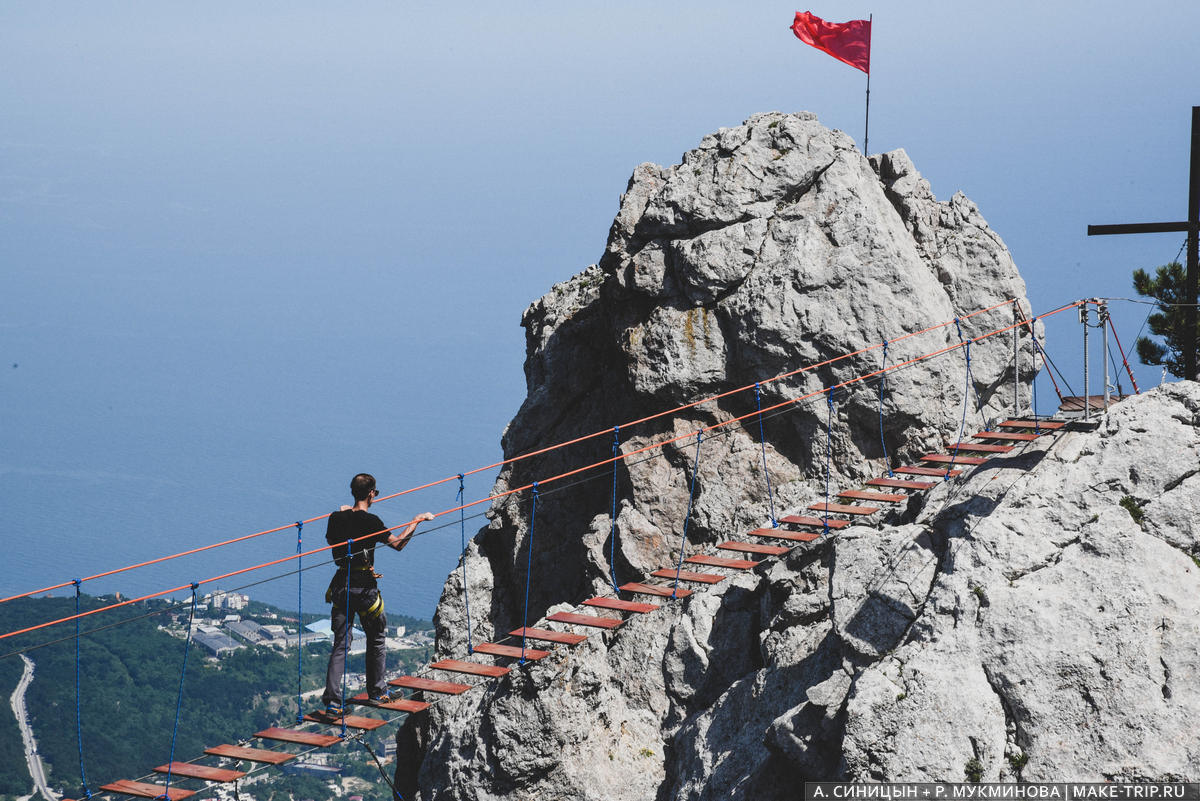 If you are not afraid of heights, walk across the suspension bridge on Ai-Petri. It costs 500 rubles. The photo shows our editor-in-chief Alexey Sinitsyn walking to the cogs.

Explore the caves. The most famous and largest karst caves on Ai-Petri are Tryohglazka (Ice Cave), Geofizicheskaya and Yalta.

Find the waterfalls. If you drive a car, you should see Uchan-Su waterfall on your way to the peak. Usually it is full of water only in the spring, fall and after heavy rains. There are many other, less famous waterfalls and cascades further up.

Follow the trails. There are lots of trails on the plateau – after the hot coast it’s nice to just walk in the cooler climate and admire nature. 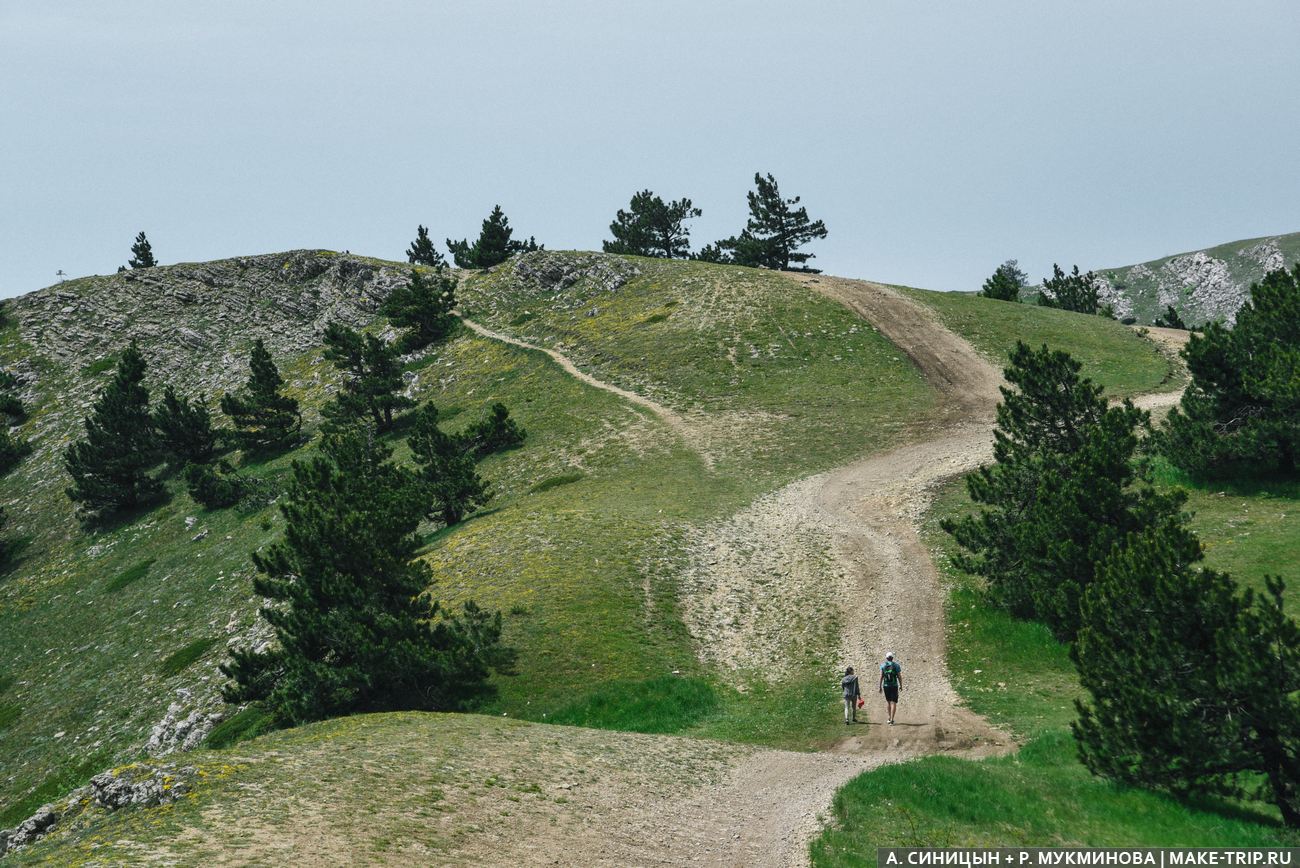 I really enjoyed walking around the plateau. Until you come to the edge and look into the cliff, you do not even realize that you are so high.

How to Get to Ai-Petri

The mountain is easily accessible! There are several ways to get to the plateau, but they all begin from Miskhor. To get to Miskhor, take bus 102 at the Yalta bus station.

You can get to the top of the mountain in different ways: by cable car, minibus, cab or your car, on foot or with an excursion. I will tell you about all the ways. 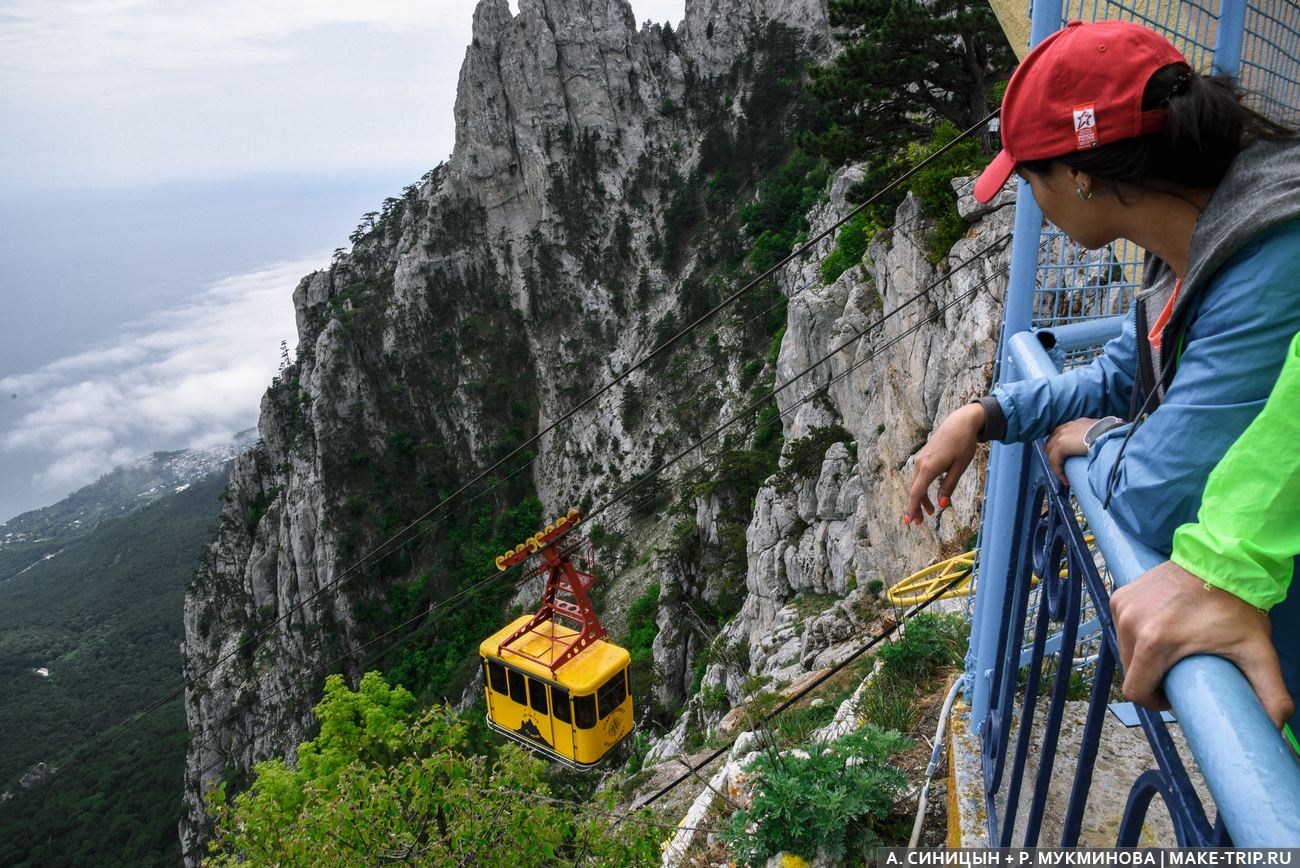 Near the top cable car rises slowly, as if grudgingly. This makes me feel a little uncomfortable – it seems that he is about to fall off.

This option does not require any special gestures, but the prices for the cable car are high: one way travel costs 400 rubles for an adult and 250 – for a child. Plus be prepared to stand in high season, a huge queue – I was on the way down for about an hour. Keep in mind that at the bottom station, the queue is twice as long as at the top.

The ride itself only lasts about 15 minutes. On the way, we were asked to change seats and checked our tickets.

Many people are excited about the ride to Ai-Petri on the cable car, but I didn’t like it. Crowded with a bunch of people, and not much to admire the views. I was lucky enough to get a seat by the window, but I could not take beautiful pictures – the glass was muddy and scratched. I do not know, maybe climbing up is more exciting.

The official website of the cable car: kanatka.com. Check there for hours of operation.

I only went down to Miskhor on the ropeway, because the queue from above is noticeably lower. Carriages are bright and very photogenic!

Take a look at this video from the ropeway:

Tourists are waiting for the enticement.

Enticement men wait for tourists at the lower and upper stations of the cable car. When I saw the snaking line for the climb, without a doubt I chose the driver. And in my case it was a great alternative to the cable car ride: the bomber stopped at several places along the way and told stories.

READ
The truth about Alushta. Reviews about rest and prices - 2022

But not everyone likes that – some people think it’s long and tedious. I don’t recommend taking the ride if you get carsick, because the ride will be up a steep serpentine road and the drivers love to speed. The price is about 350 rubles per person. The bus runs up quickly. 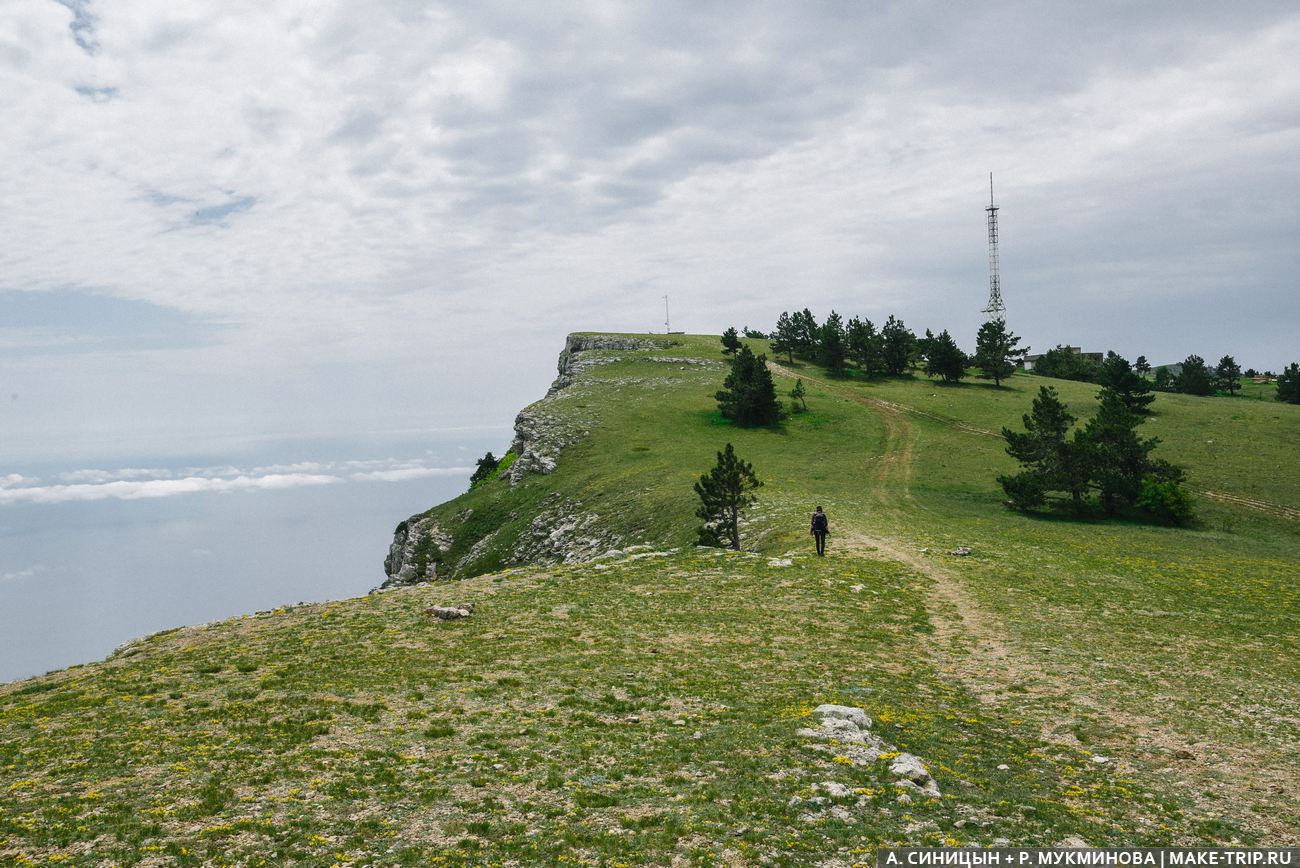 Walking on a plateau.

Private car. We climbed Ai-Petri by car for the second time, and this is the best way: beautiful views, cheap, does not get seasick. At the top – a huge free parking.

Cab. It is expensive, but convenient. Usually a car costs from 1500 rubles. 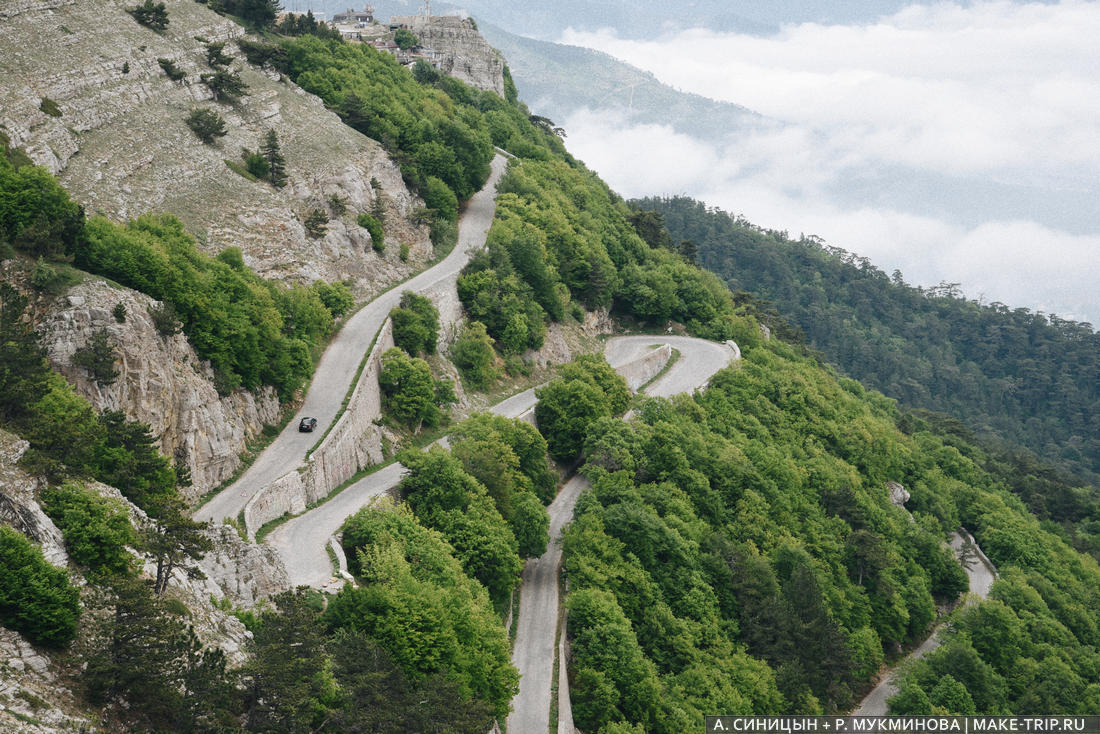 Serpentines on Ai-Petri are not the most difficult for an experienced driver. If you get motion sickness, take special pills beforehand. I take “Dramina” just in case in the mountains.

If you are in good physical shape, ascend or descend one of the environmental trails – for example, Taraktashskaya or Koreizskaya. Unforgettable impressions are guaranteed! 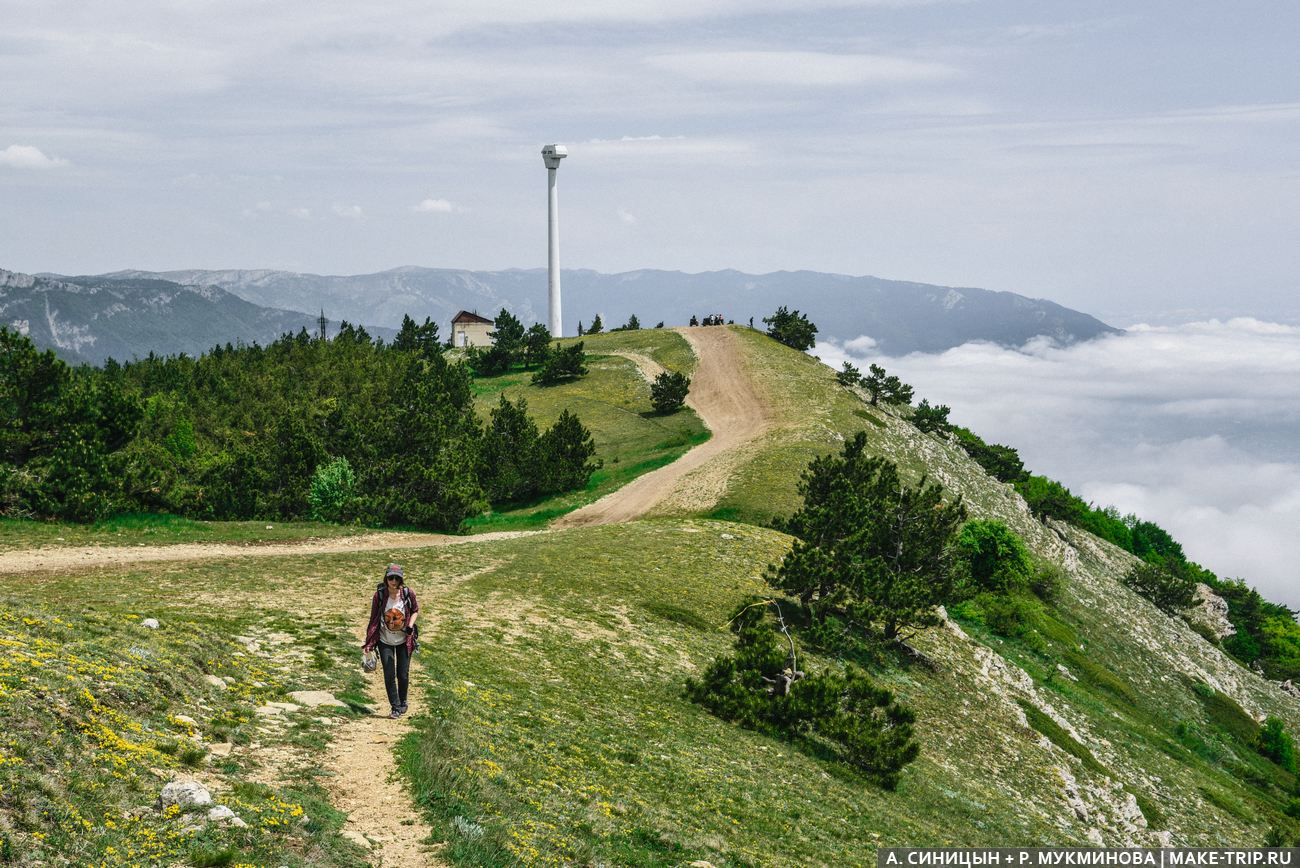 I hope that next time I will climb Ai-Petri on foot along one of the environmental trails.

Sputnik8 has an excursion with a ropeway climb, and Tripster has a hike to Ai-Petri along the Taraktash trail. You can also buy an excursion to Ai-Petri from the hustlers at any resort in the Crimea. But I advise you to book tours online with reliable guides with good reviews on the above services. Otherwise you risk buying a pig in a poke and be disappointed in the trip. 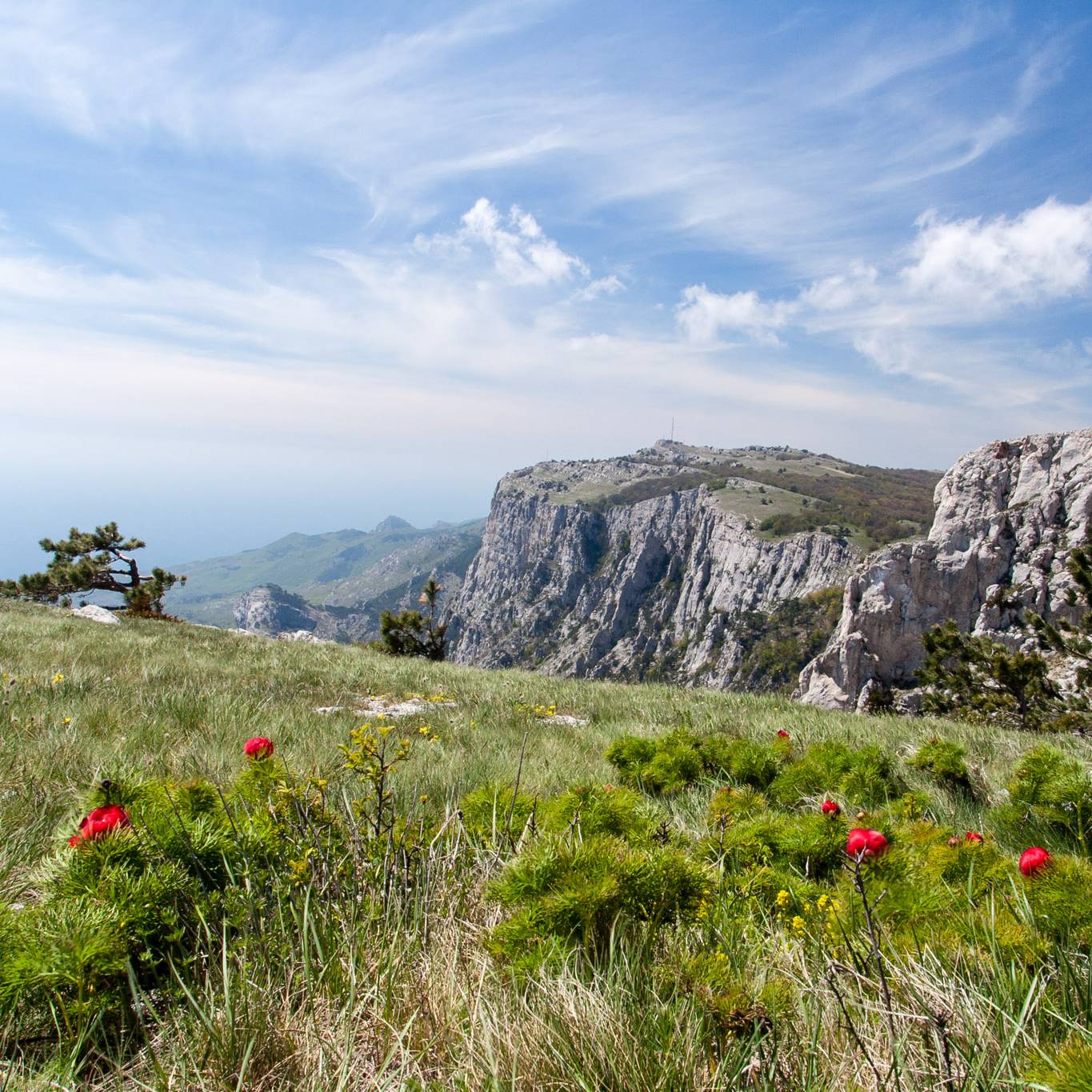