Berlin Airport: how to get to the city center 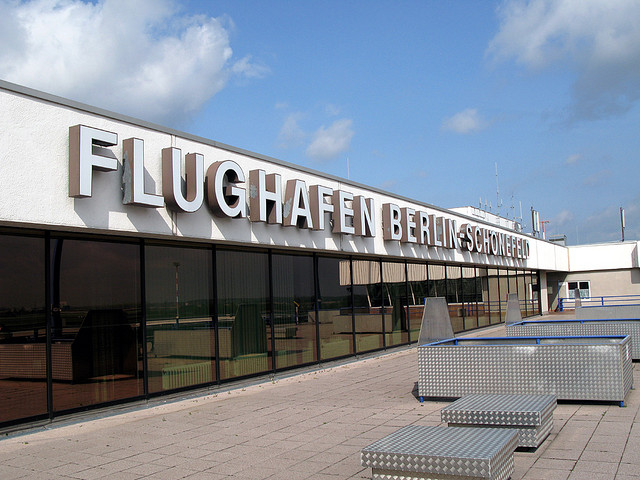 We have gathered information on how to get from Tegel Airport and Schönefeld Airport to downtown Berlin by various modes of transportation: buses, trains, and cabs.

There are currently two airports in Berlin: Tegel (Tegel) and Schönefeld (Flughafen Berlin-Schönefeld). Both airports handle both international and domestic flights. Around 2018, it is planned to open a new airport – the Willy Brandenburg Berlin (Flughafen Berlin Brandenburg), which will replace the old airports and will be the only one in the German capital. Berlin-Brandenburg airport will partially occupy the Schönefeld area.

Tegel Airport is one of the largest airports in Germany, receiving a huge flow of passengers. It consists of five terminals (A to E), it is home to airlines such as AirBerlin and Lufthansa. Airport Schönefeld attracts significantly fewer people, it is used mainly by the low-cost airline easyJet. Getting from Berlin’s airports to downtown is very easy thanks to the buses that connect the airports to the city center. Read more about how to get to Berlin below.

How to get from Tegel Airport to Berlin

You can get from Tegel Airport to Berlin by the following buses:

The easiest and fastest way to get from the airport to Berlin is by this bus, whose route runs to Alexanderplatz (S+U Alexanderplatz). Buses run every 10 minutes until 10 pm. Travel time is about 40 minutes. Ticket costs about 2.70 euros (ticket AB).

This bus takes 20 minutes from Tegel Airport to the Zoologischer Garten Station in West Berlin. The ticket also costs about 2.70 euros.

The terminus of bus number 128 is U Osloer Straße. You can use it to get to the subway (U Kurt-Schumacher-Platz).

From Berlin Airport you can also take bus number 109 to the Zoologischer Garten (about 27 minutes). In fact, this bus follows the same route as the X9 JetExpressBus, but makes stops much more frequently: at the stations Charlottenburg, Adenauerplatz, Uhlandstraße and Kurfürstendamm.

Bus stops are located outside the terminals A and B. All types of tickets in Berlin and their prices can be found here. The airport is in zone B, so it is better to buy AB tickets. 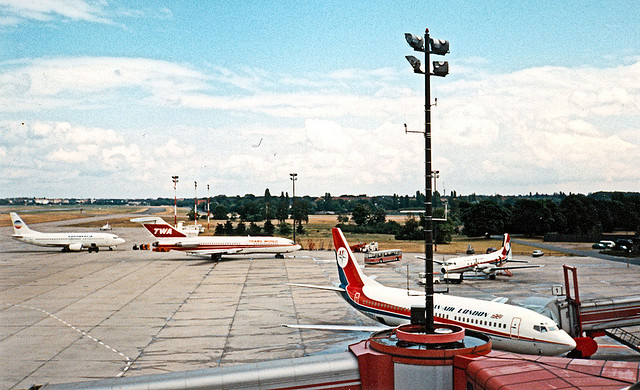 There are no direct trains and subways from Berlin Airport to the city center because the airport is not connected to the subway or railroads. You can do this only by changing trains:

READ
Berlin-Munich: How to get there

Please note that Berlin has Tegel (train) and Alt-Tegel (subway) stations, but you cannot get from there to the airport – you must return to the center and take a bus there.

Don’t want to take public transportation? Then the best option for you is to pre-book a car of your desired class and capacity at Kiwi Taxi at a fixed price. The driver will be waiting for you with a sign at the airport. In addition, you can find cab drivers on arrival – inside Terminal A (gates 6-9) and outside Terminals C and E. Standard fares apply to all Berlin cabs. The fare to the center is about 21-26 euros.

It is also possible to rent a car directly at the airport (outside Terminal E) or at Rentalcars.com.

Looking for lodging for your trip? We recommend the service Roomguru.ru – the site compares the prices of various booking systems and finds the best. 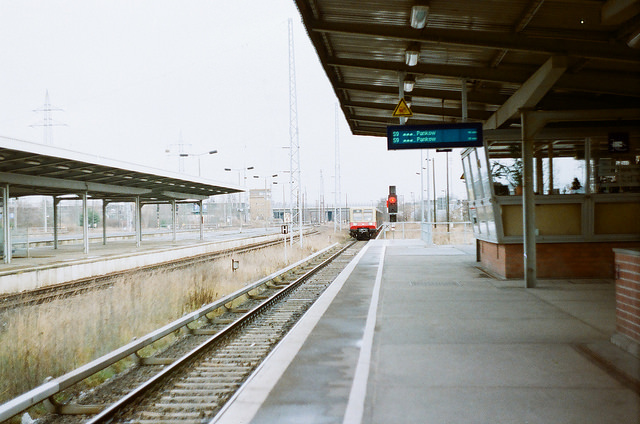 How to get from Schönefeld Airport to Berlin

Unlike Tegel Airport, it’s easier to get from Schönefeld to Berlin – there are trains, buses, and city commuter trains, plus the choice of routes is quite large.

Electric trains are handy if you arrive late at night or need to get to a small station.

The Berlin Airport Express is one of the quickest and most convenient ways to get from Berlin Airport to the city center. The airport is about 30 minutes’ ride from Berlin Hauptbahnhof Central Station on the Airport Express. Suburban trains run every hour. The railway station at the airport is 400 meters away and is called Flughafen Berlin-Schönefeld . You can walk there or take buses no. 162 and 171.

Look for interesting guided tours on Sputnik and Tripster. Individual and group tours, without crowds of tourists and in Russian. 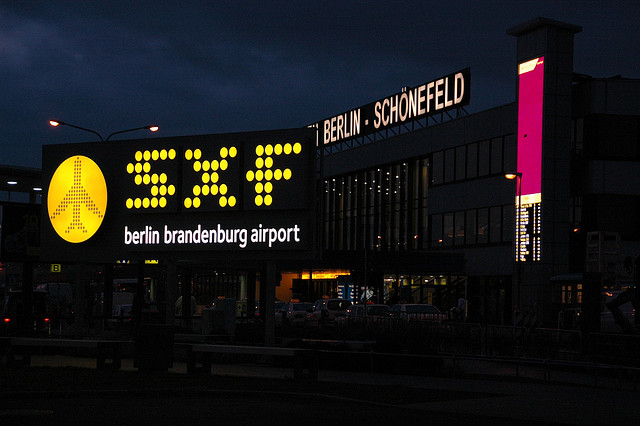 Buses are also a quick way to get from Berlin airport to the city center, but for travelers, trains will be more convenient. The following buses run:

In addition, there is an express bus X7 to Rudow and SXF 2 to Potsdam.

If you arrive/depart late in the evening or early in the morning, you can take night buses to Berlin airport and vice versa:

As at any other airport, you can find cabs at Schönefeld – outside Terminal A. You can also order a cab in advance online at Kiwi Taxi – you will already be waiting at the airport with a sign. A cab from the airport to the city center costs about 35-40 euros.

You can also rent a car at the airport – there are many offices of well-known companies. It is also possible to do this in advance at Rentalcars.com. 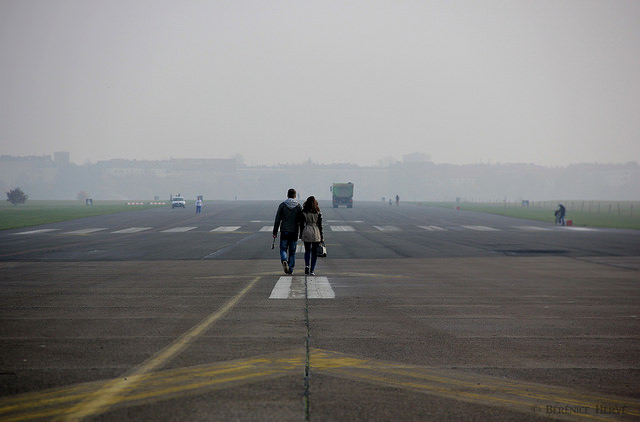 If you are traveling to Berlin Tegel Airport from other cities (and vice versa), you can transfer to JetExpressBus at Berlin’s main station Hauptbahnhof or Zoo station. In addition, the following buses run directly from Tegel Airport:

From / to Schönefeld Airport can be reached by flights of the following carriers:

In general, the airport is located nearby (30 minutes) from the main station in Berlin, where you can easily go anywhere.

Another option is to book a transfer to Kiwi Taxi. It’s easy and convenient, but more expensive than the bus. Beneficial if you go as a family or a company. The choice of cities is large.

How to get from Schönefeld Airport to Berlin

The distance from Schönefeld Airport to Berlin is 22 km. In contrast to Tegel Airport, which is only 10 km away, Schönefeld is quite distant from the center. Nevertheless, the trip to the main locations in Berlin does not take more than 50 minutes.

The airport and the city are connected by bus and city trains (S-Bahn), as well as regional trains.

A 5-minute walk from the airport is the Flughafen Berlin Schoenefeld train station, which provides transport links to central Berlin and the surrounding area. A covered walkway leads from the terminal to the station.

Bus stops are located near the train station and in front of Terminal A.

How to get from Schönefeld Airport to central Berlin 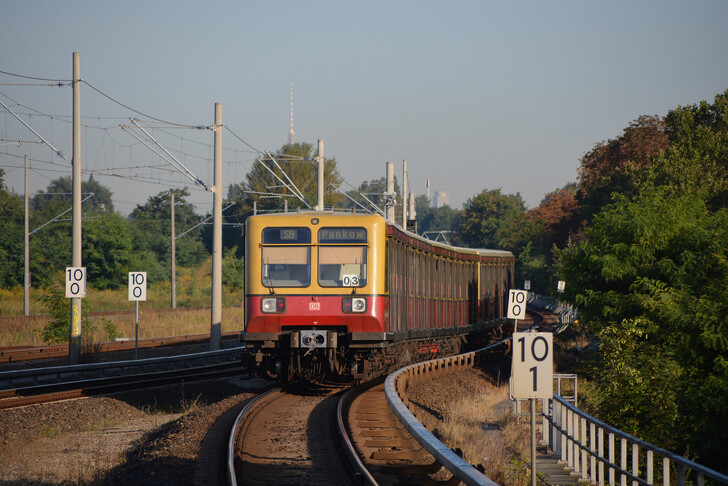 Suppose you want to go to the Friedrichstraße station. From there to the Brandenburg Gate – 1 km (10-12 minutes), to the Museum Island – 700 meters (7 minutes) to the Berlin TV Tower – 1.8 km (23 minutes). In short, the station is located optimally with respect to central attractions.

So, to get to it, you need to take an electric train line S9. The trip will take 40 minutes. The ticket price is 3.80 euros for an adult and 2.70 euros for a child aged 6 to 14 years. This is the cost of a single ticket for Zone ABC. Toddlers ride for free.

Line S9 trains run 24 hours a day, every 20 minutes. At night on Fridays and Saturdays – every 30 minutes. It is worth noting that this line, covering the southeastern districts of Berlin, the center and the western outskirts, goes to Spandau.

To plan a trip intelligently, go to vbb.de. It is a trip planner for Berlin and its surroundings. It’s easy to navigate: select your departure and arrival points and your desired start time. See the itinerary on the map – in its entirety as well as in its individual parts. The website is translated into English.

How to get from Schönefeld Airport to Alexanderplatz 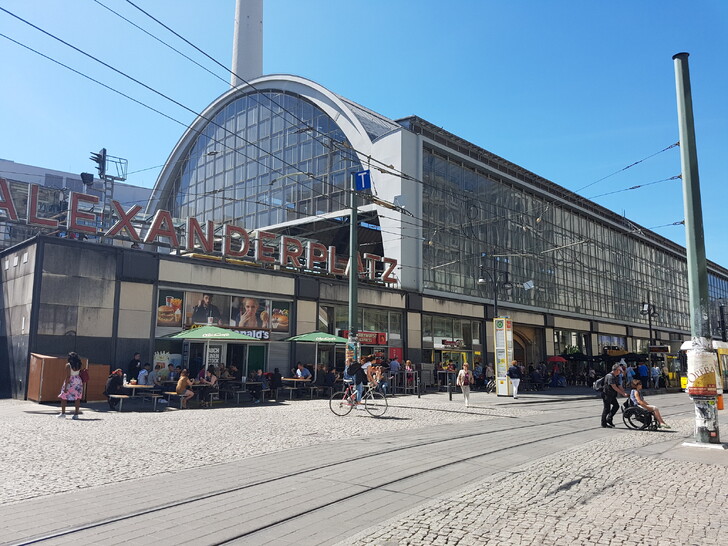 At Alexanderplatz you will find the railway station of the same name. It is one of the busiest transportation hubs in Berlin. The distance from it to the Brandenburg Gate – 3 km. And the TV Tower is within walking distance.

From the airport to the station you can take the same train line S9. Travel time is 35 minutes. The fare zones are the same (and in general Berlin is very clear in this regard), so the cost is the same: a single trip for an adult costs 3.80 euros, a child 2.70 euros.

How to get from Schönefeld Airport to the zoo 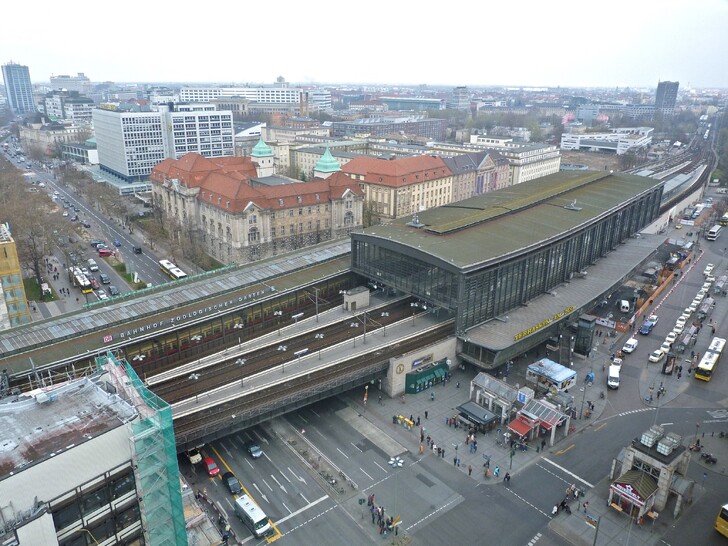 The Berlin zoo is located near the train station Zoologischer Garten. There is no surprise that all the same trains of the S9 line take you to it from the airport. The trip takes 50 minutes.

If you want to learn more about Berlin’s S- Bahn city trains, visit sbahn.berlin, where you will find routes with all stops and train schedules.

How to get from Schönefeld Airport to Kurfürstendamm

Kurfürstendamm is a 3.5 kilometer long boulevard filled with boutiques, shopping malls, cafes and restaurants. It stretches from west to east, so consider how to get to this street from both sides.

In the eastern part there is a department store Karstadt, the Kaiser Wilhelm Memorial Church, and several cinemas. The name of the metro station is Kurfürstendamm.

A direct connection from the airport is possible by taking the S9 train to Zoologischer Garten and then taking the U9 subway. However, you can walk from the station to Kurfürstendamm just 350 meters. One can walk it all in about 50 minutes.

From the west, it is better to get to the street through the subway station Adenauerplatz. It is close to the Charlottenburg railway station of the same name.

From the airport to Adenauerplatz you have to change trains in about 50 minutes. Options can be very different: suburban train + subway, train + subway, bus + subway. The planner vbb.de will solve all the issues with making up the route.

The cost, again, does not differ.

Cab from Schönefeld Airport to Berlin

A comfortable, convenient and reliable way to get anywhere in Berlin is by cab. Pre-booked transfer saves you from having to plan your trip. The driver will meet you at the arrival area, if the airport rules allow it. He will hold a plate with the name of the passengers, so no one gets lost.

The cost of a cab from Schönefeld to Berlin is formed based on several factors: the distance of the destination, comfort class, capacity. Additional services, such as child seats, are paid in addition to the fare.

To order a cab, specify the desired route, enter the data and make the payment. Transfer options:

You can rent a car to get to the center or other areas of Berlin, directly at the airport. You can pick up a compact car or a big van – it depends on what you are planning to do.

It wouldn’t hurt to check out our practical guide to transportation in Berlin. You will find a description of fare zones, fares, and driving directions. It also includes information on how and where to buy tickets.

Germany 0
We are celebrating New Year’s Eve 2023 in Germany: Berlin and Munich We suggest

Germany 0
Where to stay in Berlin (Germany) The hotel is good. The location is great.

Germany 0
Germany: what you need to know before you travel I’ve lost count of how