I should mention right away, this is not my first visit to this island, as my husband himself is from Crete, I had to be here quite often, but it was a three-week trip in September 2018, inspired me to write this review.

And so, Crete is a warm sea, extraordinary shades of azure, delicious food, scorching sun and people with a wide soul. For me Crete is like that, maybe for someone else, it is very different, because it is a huge island where everyone will find something different.

My first advice is do not go to a travel agency, organize your time yourself, so you can avoid many disappointments and enjoy the island and its authenticity in full.

I will tell you how we distributed our 3 weeks in Crete, maybe someone will find it useful.

So, the first week is Chania. It’s the city where my husband was born and grew up, where all his many family and friends live. What to see in Chania? Of course, its famous Venetian old port. You could walk from one side of it to the other every evening and not get tired one bit.

There are also plenty of restaurants where you can eat for all tastes and wallets. I would not advise any restaurants in the port, they almost all offer delicious and inexpensive food. We personally mostly eat at Monastiri restaurant and restaurants in a small radius from it. I personally suggest you try the seafood, and wash it down with ice-cold ouzo, onis vodka, which goes perfectly with it. Drink, of course, to a fan, but still worth a try.

If you don’t have much money and want to try something traditional, then it’s my favorite souvlaki. It’s divine! Every time I come to Greece, the first thing I do, no no, I do not run to the beach, but I run to eat souvlaki.

To the beach in Chania. In the center there is a beach, and it’s not bad at all, but I guess I’m a bit spoiled, so for me this beach is the most extreme option. If a quick dip, then why not.

In fact, if there is no car, you can get by bus for 1.2 euros to the beach, which is located outside the city. There you can relax either take a deck chair with an umbrella for 6 euros, or on the sand for free, or in the beach bar, sit for hours, as does a huge number of Greeks, while sipping espresso or cappuccino, the favorite drink of all Greeks-cold coffee, a day this Fredo drank just an unlimited amount, in a word, you are not Greek, if you do not drink Fredo at any time of day. Well, since I’m not Greek, I have to admit that I don’t understand Fredo, so I drink beer on the beach.

READ
When is the best time to relax in Greece? Weather and seasons by month

If you go to the beaches very far from the city, here, of course, how not to advise the 2 most beautiful beaches of Crete – Elafonisi, the famous pink sand beach and Balos.

The beaches are really beautiful and you should see them at least once. But there are three BUTs.

There are an unbelievable number of tourists. There are so many of them, that you get the feeling that the whole Crete is just at this moment, right here. There are screaming and shrieking children, ladies of all tastes, taking millions of photos, and just a lot of people. And everything would be fine, but from so many people, beaches, alas, lose their natural beauty. And, worst of all, they simply deteriorate.

2. The road to these beaches is not for the faint of heart. It is a long way along the most dangerous serpentine. In some places it was frankly uncomfortable.

3 And, alas, lovers of swimming these beaches are not very suitable. The sea is not the warmest and not the deepest.

And despite everything, these beaches is really an example of how beautiful nature and the sea can mesmerize.

In general, to summarize, a week in Chania is something to do. You can spend two days visiting the above-mentioned beaches, relaxing in the city, shopping, eating, drinking and … continuing your way, exploring the beautiful island of Crete.

The second week was spent in the mountains of Crete. You know, Crete, it’s not just the sea, it’s the mountains! Where you wake up in the morning to the cry of the rooster and the ringing of the lambs’ bells.

Where moving along the serpentine mountains, you have to be careful not to run over a mountain goat or a herd of them that piled lawfully on the road, and who cares, they are lying and spit on you wanted. And going down from the mountains to the sea, be prepared to be dazzled by its colors.

The region we’re staying in is called Sfakia. With its capital, Chora Sfakion.

Reviews about Crete, based on personal experience. Which cities of Crete are worth visiting and why, the general pros and cons. What to pay attention to those who are going to visit Crete for the first time. Which cities should be chosen for family holidays and which ones for youth holidays and why? What is of most interest to tourists, recommendations from the experience of their journey.

The trip to the island of Crete was my third visit to Greece, and, as on both previous occasions, the goal was a combination of beach and sightseeing holidays. The island of Crete is first and foremost a rich and in many ways unique history. In this case, since the island is big, the resorts there are very different. During my 16 days in Crete I stayed in three different places, and from there I traveled around the island, both alone and as part of excursion groups.

Because the sea is the sea in Africa, as they say, and the attractions are different everywhere, so I will begin my story with them.

Of course, this top is 100% subjective, but still. READ
Temple of Zeus the Olympian in Athens

Of course, these are not all of the noteworthy sites I visited. There were others.

And now let’s evaluate Crete in terms of infrastructure.

The pros of vacationing in Crete

The disadvantages of a holiday in Crete.

READ
Holidays in Greece with children - 2022. Best resorts and hotels

Crete – to go or not to go and where to stay

If you are interested in a family holiday, I can recommend the village Amoudara, located just west of Heraklion. It is not far from the capital city and the airport, the beaches are surprisingly thin and sandy, and the descent to the water is moderately gentle. That said, the sea seemed relatively calm to me.

If you want a break from compatriots, for whom Crete is very popular, go to Ierapetra . This resort is largely oriented to the locals, and the Russian speech there is almost impossible to hear. In addition, the sea there is already Libyan. On the one hand, it may seem windy, but the wind blows not from the sea, but from the mountains, so the water is relatively calm. 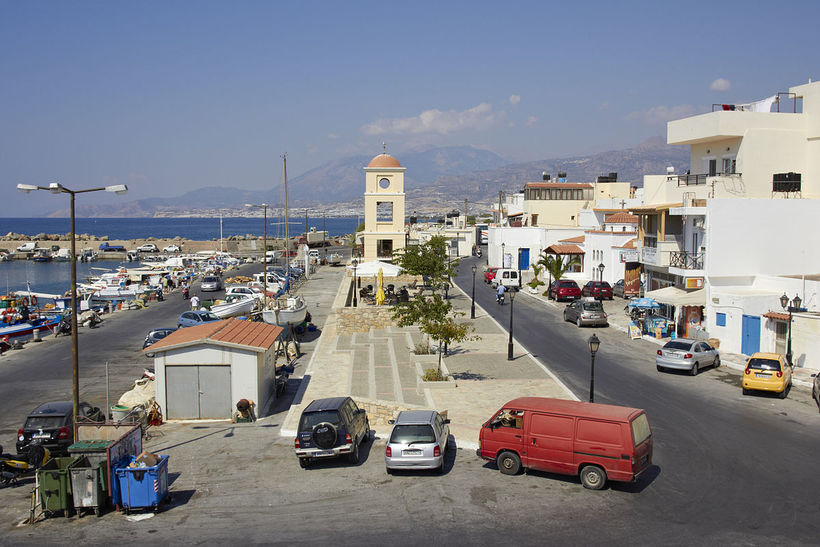 For traveling around the island, probably the best option is Hersonissos, as buses to the main bus station of Heraklion leave probably every 15 minutes, and from there you can go almost anywhere on the island. Although, given the disadvantages of this resort, I would probably prefer Amoudara, although from there the buses to the capital go about once an hour and do not stop at the main bus station of the capital.

Thanks for the very nice and detailed review! And the pictures are great, I love the views of Greece, even though I haven’t gotten to it myself yet).

My girlfriend and I decided to go to Crete on vacation this year. This Greek island has long attracted us, we flew to rest from the tour company. Independently for the first time were afraid to go to an unfamiliar country.

In his choice we chose the city of Heraklion. And we did not regret it! There just is where to have fun! In addition to the entertaining nightlife, we visited the cognitive excursions – in the area is the famous Minotaur labyrinth, many monasteries, monuments and fountains.

Hello Marina! Thank you for your interest in Travel Ask, for your experience as a traveler and your desire to share it with the readers of the resource. Unfortunately, due to certain restrictions, we cannot mention the names of individual Internet resources at this time. For this reason we have made minimal changes to your review, now it fully complies with the rules of the resource and remains, as before, useful for readers. Thank you for your understanding!

READ
Climbing Olympus and the plateau of the Muses. Our experience and advices

What would you do if your social media friend invited you to visit? Most people probably wouldn’t dare. But I took a chance! And went not somewhere in the next district, and even in another country – the ancient and beautiful Greek island of Crete (at the same time has saved on hotel and food).

And right away I can say that I have not regretted my decision. Crete – this is an amazing place, all around is soaked with antiquity (though personally I was soon soaked in more and sweat, because the temperature there was a little high for my sensitive Russian soul – about forty degrees). However, the temperature in the houses was surprisingly comfortable, even without air conditioning, not for nothing many buildings on the island are painted white. I spent a night at a friend’s place in Heraklion – the capital of Greek Crete, but the rest of the time I did not sit still and spent two weeks of my vacation with great benefit, visiting many sights: the Frangokastello Fortress, the ancient city of Falasarna, the Archaeological Museum of Heraklion – they all left a significant mark in my memory. But the highlight of the program was, of course, the famous Knossos Palace. 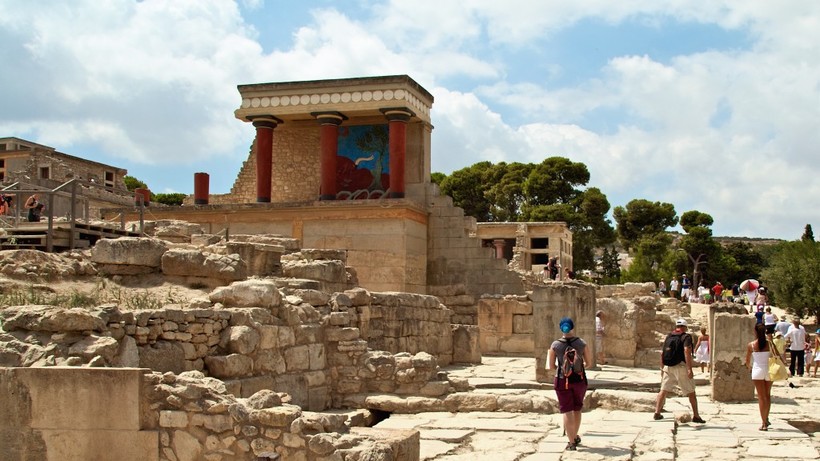 On the day of my visit I was incredibly lucky with the weather – the breeze was blowing and it was a little cloudy. I can’t imagine how I would walk there if it was so hot as on the day of my visit, there were no ceilings in most of them and only few rooms were closed from the sun. Anyway, luck was with us and my friend and I walked around the entire palace. The atmosphere of myths and legends surrounded us from all sides, though the crowds of other tourists somewhat prevented “to touch antiquity”. And the beach … They took me to the best beach of Crete, Elafonisi.

It was like a dream: soft yellow sand for tens of meters around, clear blue water, light cooling breeze and charming band of pink sand at the water edge.

Rest was successful one hundred percent! Truth now after my stories the whole family wants to go too in this magical place. However, I do not mind to go there again, or two … or three