Sometimes a human error leads to an entirely unexpected result, thanks to which people can now enjoy a beautiful geyser.

Engineering puncture and the natural forces of nature have created an amazing miracle – the Fly Geyser. Playing with various shades of colors, it is as if from another planet. It is quite a young formation, its age is only fifty years. Unlike this geyser, natural formations were formed millions of years ago. Every year the geyser becomes more and more beautiful. This happens due to a combination of several factors: climatic, geological, as well as due to the composition of the water, which is rich in a variety of mineral salts. All these components react with oxygen and form a variety of oxides. They are the main cause of the bizarrely shaped growths. Thanks to calcium carbonate, which settles on the surface in large quantities, the walls of the formation are very strong, like rocks. The area of land flooded with geyser water is getting larger every year. Over the years, a rather deep lake of cooled water has formed. Terraces of precipitated calcium carbonate have formed around the active geyser fountains, and they add an incredible beauty to the landscape.

The three-jet geyser is located on a pedestal, which was formed by the impact of thermal waters and desert soil. Thanks to the minerals in the water, the sand surrounding the geyser has turned into solid rock.

The lakes resemble large mirrors, which reflect the exotic colors of the landscape. Everything looks especially beautiful in the sunset. The history of geyser ra

The history of its origin is amazing. It appeared by accident, while drilling a well in 1916. Versions of its purpose are divergent. According to some sources it was intended for a well, according to other sources it was for an irrigation system. Some sources say that they wanted to search for oil.

For fifty years the water rose from the depths and made its way to the surface. Thanks to chemical reactions rather quickly above the surface were formed three cones, six meters high, from which constantly rises a jet of water of 1.5 meters.

The bizarre colors of the geyser

The geyser and the surrounding area have an unusual coloring. This combination of colors is a result of minerals dissolved in hot water and blue-green algae.

In the rays of the morning sun, the steam from the spring plays pink colors and turns into an amazing spectacle.

The most beautiful colors play at noon, when the sun is at its zenith and jets of smoke and steam are swirling against the bright blue sky.

In the last rays of the sun, the landscape looks like a fairy tale castle. From afar, the three cones resemble a tent from some Oriental fairy tale, framed by black feathers, the way water jets look against the dark sky. All this is enveloped in a thick veil of steam and gives the geyser an enchanting look. The water from the thermal spring contains a lot of minerals. This is because it passes through many layers of geological rocks before it comes to the surface. Water is a good solvent and therefore absorbs these minerals. When it comes to the surface, a chemical reaction occurs and the soil, under the influence of the mineralized water, turns different colors. With each passing year, the minerals accumulate around the spring, hardening and building up on each other.

The bright colors of the geyser are also formed due to cyanobacteria. Depending on habitat conditions, these algae can take on a variety of colors: green, olive, yellow-green or red.

In addition to coloring rocks, bacteria also prepare the substrate for other organisms to colonize. It is cyanobacteria that repopulate the substrate after volcanic eruptions and feel great near hot springs, where water temperatures can reach up to 93 °C. How to see the geyser

The attraction is located on the edge of the Black Rock Desert in Nevada, thirty kilometers from the town of Gerlach.

To see such a natural wonder is not easy. The thing is that it is located on private territory. The owners have enclosed their property with a fence and lead a secretive lifestyle. Local authorities have repeatedly tried to negotiate the sale of the site, but their requests are constantly rejected.

If you want to see the geyser, you need to negotiate directly with the owners of the farm. If they refuse, you can drive down a dirt road and see the top of the geyser that way.

Geyser Fly in the USA 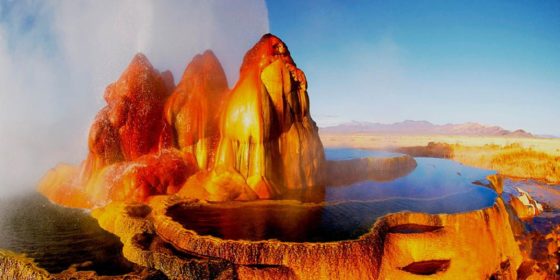 When you look at Fly Geyser, you get the impression that somehow, without even noticing it, you suddenly found yourself on another planet. Perhaps on Mars, or perhaps in a parallel world full of tales, magic, mystery, and adventure.

Orange, bottle, red, sand, green, brown colors give the three small rocky slopes and the geyser, throwing out of their tops boiling water, an unusual, unique and unique look, which looks especially chic when illuminated by sunlight, which adds new, bright and amazing shades to the landscape.

One of the most beautiful geysers on Earth

Located in the arid Black Rock Salt Desert of the U.S. state of Nevada, USA at an altitude of 1,230 meters above sea level, thirty kilometers from the town of Herrlach, Fly geyser.

Despite the fact that this amazing phenomenon is considered a geyser, in fact, it is more likely to be called a thermal spring, as the water there is always flowing (whereas a geyser throws a water jet periodically).

As for Fly, the flow of hot water pouring from it never stops for a second, and the height of fountains (there is not one, but three) is about one and a half meters. If you take into account the surrounding landscape and the size of natural elevation from which it springs, the total height of this amazing phenomenon is more than three and a half meters (and its size is not constant, because it is constantly growing).

Geyser, which is located in the United States, Nevada from the outside looks as follows:

Previously, the general public knew absolutely nothing about this geyser for a long time, as it was successfully hiding among the lakes and swamps. The situation has changed after a photographer from the U.S. managed to capture and publish some extremely good shots.

The history of the formation of Fly geyser, which is located in the state of Nevada, is as interesting and unusual as its appearance. It was created quite by chance, and the important role in its creation was played not so much by nature, as by human factor – its appearance is directly associated with drilling operations, carried out here in 1916 (what exactly the workers were trying to do – whether to dig a well or even create an irrigation system, or were searching for oil – sources differ).

Since this area is located in the area of active volcanoes, it is worth noting that even at some distance from them life underground is extremely violent and active.

This also applies to the underground waters flowing relatively close to the surface and close to the magma, which heats them to boiling point. This boiling water runs peacefully along its course, and when it happens to get into cracks leading to the surface of the Earth, it rises up through them. 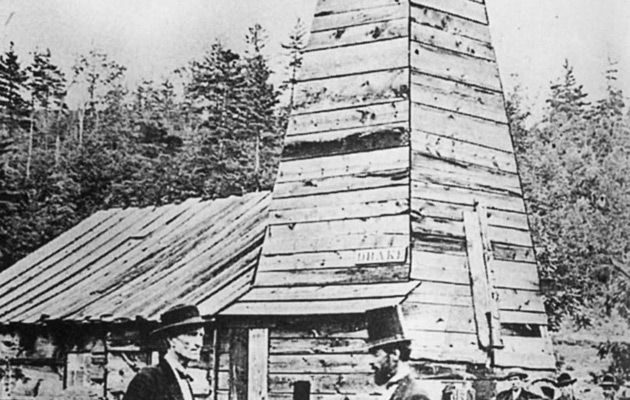 The hole made by the workers turned out to be so deep that they not only reached the geothermal pocket, but also punched it. Naturally, the boiling water did not interest them at all, so the hole, as well as the drilling site, were mothballed, and they were simply forgotten about for many years. Meanwhile, the hot water gradually began to make its way up through the cracks.

This process was quite long and lengthy, but after fifty years it managed to make its way completely to the surface, where it began to create a bizarre and amazing landscape from the minerals dissolved in it, masking its work with lakes and swamp around it.

The bizarre colors of the geyser

The coloring of the natural rocky uplands created by the geyser, as well as the terraces around it, is nothing short of astounding. One can rarely see such combination of colors, especially in a natural fountain on our planet. The reason is the minerals, dissolved in the boiling water, which are so rich in the area around the spring (especially salts, calcium carbonate, magnesium, sodium, iron), and the blue-green algae (cyanobacteria), covering the solid mineral deposits.

The water of the geyser itself, which is located in Nevada, is extremely rich in useful minerals, which enrich it by passing through different layers of geological rocks. Therefore, it is not surprising that dissolved minerals, appearing on the surface, react with the substances that were there, interact with them and acquire one or another color and shade.

Accumulating around the source, they harden and begin to grow on each other, rather quickly forming three small rocks, which increase in size with each year (considering that gypsum has been actively mined in Black Rock Desert for many years, it is safe to say that it also plays a significant role in building the geyser walls).

The colors of the geyser walls would not be so wonderfully bright and varied if it were not for cyanobacteria, which used to be called blue-green algae. Despite their tendency to be blue and green, they may well be green, olive green, yellow-green, red, and other colors, depending on the pigments in their cells.

At the same time, cyanobacteria not only paint stony formations in amazing colors, but also perform a very useful function for nature – they prepare the soil for other plants which are less adapted to survive in hard conditions. They are the first to inhabit the soil after volcanic eruptions, and feel perfectly well near geysers, easily surviving at temperatures up to 93 ° C.

How to see the geyser

But to see this miracle is not easy – it is quite difficult to approach the fountain because of the huge number of lakes and swamps around it. This is unlikely to stop the intrepid, if the land is not in private ownership, the owners, to protect their land from the sudden influx of tourists, completely surrounded its territory with extremely high fence. The ranchers lead such a secretive life that all attempts by the authorities to negotiate with them and make the miracle geyser public, or sell the land, are ineffective.

Since in the U.S. private property rights are honored and respected, few dare to overcome the high hurdle, so tourists who want to see the spring, there are two options. The first is to negotiate with the ranchers and get permission to visit their property, and the second is to turn to a dirt road, as the iridescent geyser peak can be seen from the highway.