Is it worthwhile to go to the Crimea in the summer of 2022?

Many people wonder if it’s worth going to the Crimea this summer. The turbulent situation in 2022, the border with Ukraine and the closed airport of Simferopol are causing concern for those who were planning a vacation on the peninsula. Russian Railways, represented by the Grand Service Express carrier, of course, promises additional trains to the Crimea.

However, tickets for the May holidays are already in short supply. And not everyone is ready to go for 45, 60, 72 hours from Petersburg, Murmansk, Yekaterinburg and so on.

In addition, from April 11 to May 26, 2022 in some regions of Crimea (Armyansk, Dzhankoy and Dzhankoy area, Kerch*, Krasnoperekopsk and Krasnoperekopsk district, Leninsky district) the republic introduced a high level of terrorist danger (source). And this fact could not but cause fear among tourists.

So is it worth to go to the Crimea this summer? What are the advantages of rest in more stressful conditions than in previous years. And what are the alternatives.

And immediately a plus – even Yalta Intourist at the beginning of summer costs from 5,750 rubles per day against last year’s 11,000 rubles.

* The regime of high terrorist danger no longer applies to Kerch and the Leninsky district (information from May 11, 2022). However, the “yellow” level will remain in effect at transportation, energy, water, industrial and housing and communal facilities practically throughout the whole of Crimea.

Pluses of rest in the Crimea in the season 2022

Hoteliers note an extremely restrained intensity of bookings for the summer. Therefore, the plus number 1 – a decrease in tourist traffic in the Crimea, compared with the record 2020 and 2021. And thus on the beaches and near the attractions can breathe easier. Who was on the peninsula in previous years, knows that the number of people was critical.

READ
The Truth about Ordzhonikidze . Reviews about rest 2022 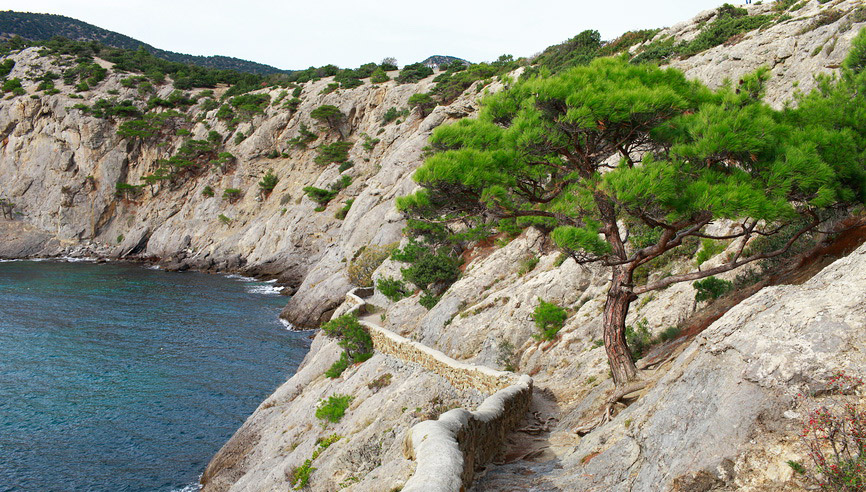 Stankevich pine on the coast of Sudak Photo: Photobank Lori

In addition, and tour operators, the largest aggregator Yandex.Travel noticed that prices in the Crimea remained at last year’s level. The reason is a closed airport in Simferopol. At the same time in Sochi prices increased by half.

The third reason to plan a vacation in the Crimea in the summer of 2022 is the west coast. From Sevastopol to the Black Sea. The matter is that the passengers of trains more often choose to rest in the east of the Crimea: Feodosia, Sudak, Alushta. And up to the west simply do not reach. Therefore in the west because of the lack of tourists you can expect lower prices and a greater choice of places to stay.

* Only if the Simferopol airport will not open until the summer. Current information on the opening / closing is collected in this article.

Who should not go on vacation in the Crimea in 2022

READ
The route on the Crimea: a great journey

** The likelihood of Crimea’s airport being opened by the summer persists.

** The high level of terrorist danger in the Crimea (you need to stay away from crowds of people, pay attention to suspicious objects and always have your documents with you) has already been introduced for a month and a half. But there is still a chance that the regime will not be extended over the summer.

Alternatives to rest in the Crimea.

We could write about increased interest of Russians to “weekend tourism” – the nearest suburbs of Moscow, St. Petersburg, Nizhny Novgorod and others. But it does not have any relation to summer beach rest.

To go to the Crimea this summer or not to go, everyone decides for himself. While the situation on the peninsula does not inspire fear. Yes, it has become less convenient to get without planes. And maybe the situation will spread to the whole holiday season. But the decrease in tourist traffic and last year’s prices for hotels only inspire many.

My Telegram – Crimea Fest . I write about recreation and the situation in the Crimea. I live in Sevastopol and share what is happening on the peninsula right now.

Whether it is necessary to go to Crimea in 2022

The current unstable situation and the proximity to the Ukrainian border cause concern among people who plan to vacation in Crimea. In addition, a high level of terrorist danger has been in effect in some districts of the republic for more than a month. In the urban district of Armyansk, as well as in the Krasnoperekopsk and Dzhankoy districts, the regime was extended until June 10, 2022. It is possible that such a regime will continue throughout the summer.

Therefore, the question of whether it is possible to go on vacation in the Crimea this summer remains relevant at the beginning of the tourist season. On the one hand, the situation in the republic is more unstable than in past tourist seasons. However, even in this situation, there are several advantages.

As of late May and early June 2022 the railway and road parts of the Crimean bridge are functioning normally. There are no restrictions on the passage of personal vehicles, but there is an inspection of vehicles. It is worth noting that such a procedure was also introduced in previous years.

As for planes, the sky over Crimea is closed to civil aviation. The period of flight restrictions is constantly being extended, so the Simferopol airport does not accept flights. There is a possibility that this regime may last until the end of the summer.

To increase the passenger flow to the Crimea the railway company “Grand Service Express” issued additional tickets on sale. It is planned to increase the capacity of trains by means of additional carriages.

So you can get to the Crimea by shuttle bus, train or your own car.

READ
The truth about Kerch. Leisure reviews and prices - 2022

Demand for hotels in the Crimea

At the moment hotels, sanatoriums and guest houses of the Crimea are available for booking at tourist sites as usual. However, as shown by the May holidays, the demand for accommodation facilities in the Crimea has dropped to 45% compared with 2021.

According to Kommersant, this situation has been observed since late February 2022, after the start of the Russian special operation in Ukraine. Tourism experts say that the trend may continue throughout the summer season. This is due to the high “yellow” level of terrorist threat and closed skies.

Advantages and disadvantages, is it worth to go to the Crimea

Rest in the Crimea in the current situation in 2022 has its pros and cons.

The first advantage is a slight decrease in the cost of living in hotels and tourist camps. This is due to the decreasing tourist flow. The owners of accommodation facilities are trying to attract more guests at the expense of discounts, which is usually untypical for the high season. Travel aggregator Yandex. Travel agency says that prices for staying in the Crimea will go down in spring.

The second plus is that there are 20-30% fewer tourists in the Crimea than in previous years. And there are less people on the beaches, cafes, and hotels. In July and August the situation can equalize, because in May and June it’s just the beginning of the tourist season. At this time the air and sea are not yet warm enough.

Minus holiday in the Crimea in 2022 – closed airport, which stops many travelers who are used to travel by plane.

Where to have a rest in the Crimea.

The situation throughout the peninsula at the beginning of summer is generally calm. If you consider the direct distance from the border with Ukraine, the most remote resorts are:

Closer to the border are Evpatoria, Saki and Olenevka (100 km). All the resorts are open for tourists.

Where to have a rest, except the Crimea

Crimean peninsula is a warm sea, steppes and mountains. All these riches are in varying degrees in other parts of Russia.