How to get to Disneyland from Paris?

So, you’re going to Disneyland Paris! Mickey Mouse, Snow White and Winnie the Pooh are waiting for you. But how to get to them? The easiest way is by cab, which is easy to book at this link. For those who prefer a more economical means of transportation, we have written this article.

Getting to Disneyland by subway

The subway is the easiest and cheapest way to get to Wonderland Park. But to be precise, you don’t need the subway, but the RER commuter trains. These trains cross all of Paris and connect the different suburbs of Paris.

Both Parc Disneyland and Parc Walt Disney Studios® are a hundred steps from the station. The first is the one that comes to everyone’s mind, with Sleeping Beauty’s castle and children’s and adult rides. The second is considered a more adult park, with more dangerous attractions.

From the same station you can get to local hotels and Disney® Village. Some hotels are near the RER Val d’Europe station, and there is a shopping center and aquarium.

The last RER train from Disneyland to Paris leaves at 0:20.

How to buy a ticket on the RER train to Disneyland?

We’ve made a photo guide for you on how to buy your own ticket to Disneyland from a subway vending machine. You’ll find similar machines at every metro station. You buy a ticket from Paris to Disneyland and transfer from the Metro to the RER.

So you find one:

You choose a language, such as English, and click to buy tickets (first item on the menu).

READ
How to get from Paris to Marseille - all ways

The third ticket from the top on this screen (marked with an arrow) is just to Disneyland, choose it.

Next, select the number of tickets.

Done! You can go on your way.

To Disneyland by bus

You don’t have to think about how to get to Disneyland if you book your ticket at once, which includes both the bus and the ticket to enter both parks. You save time and money, as the total cost of the tickets can come out cheaper. You can buy tickets with the transfer on the official website or through our links in Russian.

Is it more convenient to go from the village of Bercy in the 12th arrondissement? Then take advantage of this offer.

Shuttle from the airport

Why make a circle through town when you can get to Disneyland directly from the airport. The Magical Shuttle links Paris airports to Disneyland Park. Journey time: 45 minutes, price: 23 € for adults, 10 € for children. Book your bus ticket here.

This bus will take you to Disney Village and to the hotels near the Val d’Europe in Serry. Choose a suitable hotel in Serry here.

Leave Disneyland in the evening

The last RER train is specially configured so that all Disneyland visitors can catch it. But sometimes you need to leave the park later. It is very convenient that there is a night bus Noctilien for this. The stop is opposite the RER station Marne-la-Vallée – Chessy, and the bus goes to Gare de Lyon in Paris. The bus runs at night, from 0:30.

Get to Disneyland by cab

If you are traveling with children or a large group, it may be more convenient to order a cab. The cost will be comparable. Cab from Paris to Disneyland from 80 euros, you will be met at the hotel and taken to the gates of the park. It’s also convenient to take a cab straight from the airport if you decide to devote a few days to Disneyland and stay in neighboring hotels.

All of the travel modes described are suitable for travel from Charles de Gaulle Airport to Disneyland. Choose the RER train, shuttle bus, or cab. See this link for cabs, we’ve detailed the other options in the article:

Summary: From Paris, the most economical way to go to Disneyland on your own is to take the RER. However, the easiest and most convenient way is to buy a ticket that includes both the fare and entrance to the Disneyland park at once.

How to get from Paris to Disneyland

Off to Disneyland? Mickey Mouse, Snow White and Winnie the Pooh are waiting for you! But how to get there? Here are some tips on how to get to the theme park. 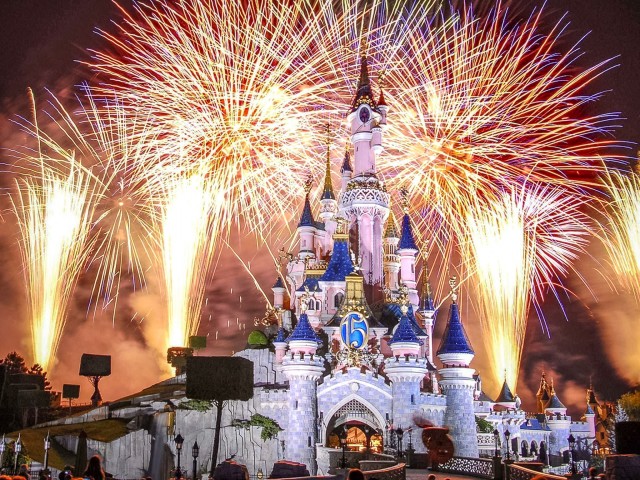 Off to Disneyland? Mickey Mouse, Snow White and Winnie the Pooh are waiting for you! But how to get there? Here are some tips on how to get to the theme park.

Disneyland Paris is located in Marne-la-Vallée, 32-47 km from Paris, depending on how you travel. Disneyland includes 2 theme parks, Disney Village, hotels, a golf course, residential and business areas.

By train from Paris

Getting to Disneyland from Paris city center is very convenient by train RER (Réseau Express Régional d’Île-de-France). You can plan the route on the official website.

To Disneyland is more convenient to buy a ticket at the ticket office, so as not to confuse the fare zones, better with the return, so as not to stand in line twice. When buying a ticket, tell them that you are going to Disneyland, and need a train RER. You can also buy tickets from special machines and in metro stations. 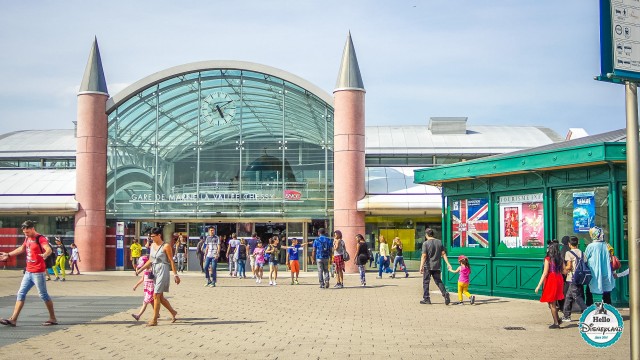 RER trains to Disneyland depart from major Parisian metro stations, such as Auber (near Galeries Lafayette), Charles de Gaulle – Étoile (next to the Arc de Triomphe), Châtelet – Les Halles (you can enter the station only through the shopping center), Nation (next to the National Square), Gare de Lyon (next to the railway station). The end point is the station Marne-la-Vallée – Chessy, red line A4, see diagram.

READ
What to see in Paris: 20 best places

Ticket to Disneyland from the center of Paris costs €8. It is necessary to keep it during the whole trip, check-up is possible. Travel time is 40 minutes.

From the station you get to the central square. Ahead is Disney Village, a pedestrian street with stores and restaurants, cinemas. About 100 m away there are two main entrances. The first entrance is to Parc Disneyland, then past the Disneyland Hotel to the amusement park. The second entrance is to Parc Walt Disney Studios® to Walt Disney Studios and the more dangerous adult entertainment.

By bus from Paris 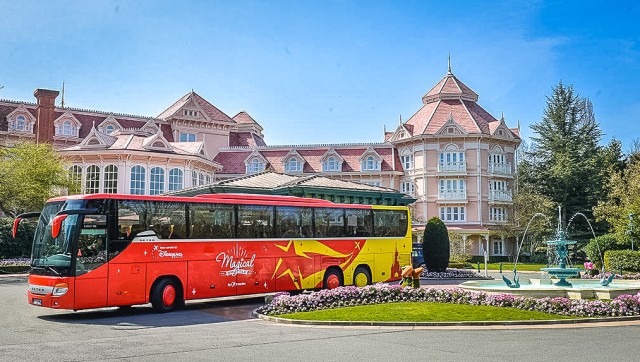 Disneyland Park offers such a service as a combined ticket, which includes travel to and from the park on the Disneyland Paris Express and an entrance ticket to a choice of one or both parks. As a result, you save money and time.

Adult combined ticket from €90, children from €80, children under 2 years old do not require a ticket. See here for current prices. You can buy tickets at the express stops, or better yet, book on the official website.

The bus picks up tourists from stops near the metro stations Gare du Nord, Opéra, Madeleine, Châtelet. See the bus schedule here. The travel time depends on where you get on the bus. On average it’s about 1 hour.

How to get to Disneyland from the airport

The fastest way to get to the park is a high-speed train TGV. The railway station is located in terminal 2. Your destination is the station Marne-la-Vallée – Chessy. You can take any train that goes south. The interval in motion – 10 minutes. The fare is about €29 one way 2nd class.

The shuttle bus Val d’Europe Airports (VEA) will also take you to Disneyland. The stop is on level 0 between terminals 2E and 2F. Look for the sign that says “VEA Navettes Disneyland Resort Paris”. The VEA buses run daily at 45-minute intervals. Travel time is 40 minutes. Adult ticket – €20, children – €16. Timetables are available here.

READ
How much does a trip to Paris - 2022 cost? Costs and Best Practices

A cab will take 20 minutes and costs from €70. Cab stands are located near the terminal exits.

From Orly airport VEA shuttles will take you to Disneyland. The bus departs from Terminal West level 0, entrance I, stop 4 and from the South – entrance C, stop 5.

Adult ticket costs €20, children €16. It will take about 1 hour. Check the timetable here.

If you are traveling with children, it is more convenient to order a cab. A cab from Paris to Disneyland will cost from €70. The trip will take about 35 minutes.

A trip by car from Paris to Disneyland is a lot of fun and gives a feeling of freedom. You have to drive along the A4 freeway. The trip takes about 40 minutes.

Rent a car in Paris – no problem. You can find the offices of car rental companies in the city center and at airports.

You can also rent a car in advance, for example, here.

How do I save on hotels?

The largest selection of hotels with discounts on the Booking website. It offers hotels and apartments worldwide.