How to get to Krasnodar airport

The distance from the center to the airport of Krasnodar is 15 km, from railway and bus stations – 15-17 km. One of the largest hubs of the Krasnodar Territory is connected with the city by public transport routes, which is represented by trolleybuses and buses.

The most popular is a trolleybus number 7, which runs on time. Under the same number runs a minibus.

Alternatively, you can take a cab or rent a car (short or long term rental).

Travel time by trolleybus is 40 minutes, by car – 25-30 minutes. The final time depends on the remoteness of the point of departure and the current traffic congestion.

Further in the article we will consider in detail the possible ways to get to “Pashkovsky” from different points of the city. 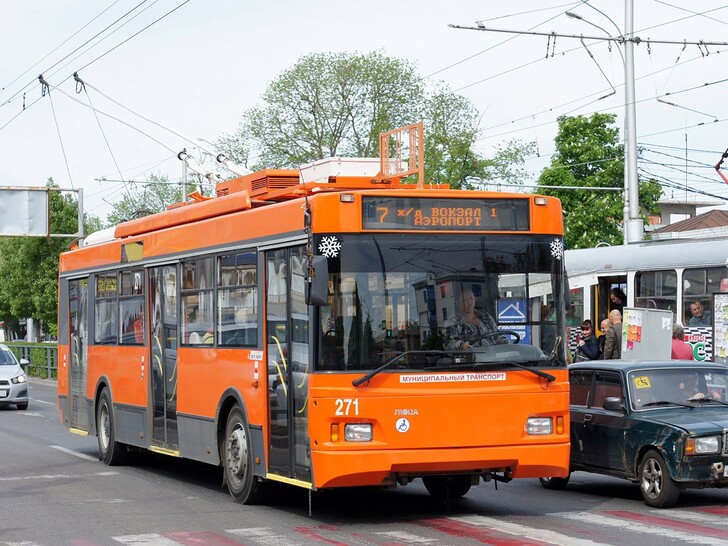 How to get from Krasnodar-1 to the airport

A major railway hub is the main one for the city, it serves mainly long-distance trains – from other regions of the country. The distance from the station Krasnodar-1 to the airport – 16 km.

The only form of public transport, which, however, is quite original, is a trolleybus № 7.

Boarding is on Privokzalnaya square. Here is the panorama of the stop from Yandex:

The transport moves along Stavropolskaya, Vasily Machugi, Fadeeva streets and arrives at the stop near Terminal 1.

The trip from the station to the airport will take at least 40 minutes without taking into account the current situation on the roads.

In the direction of the airport trolleybus runs from approximately 06:00 to 23:00. The interval of movement is 6-20 minutes depending on the time of the day. View a detailed timetable.

How to get from Krasnodar-2 to the airport 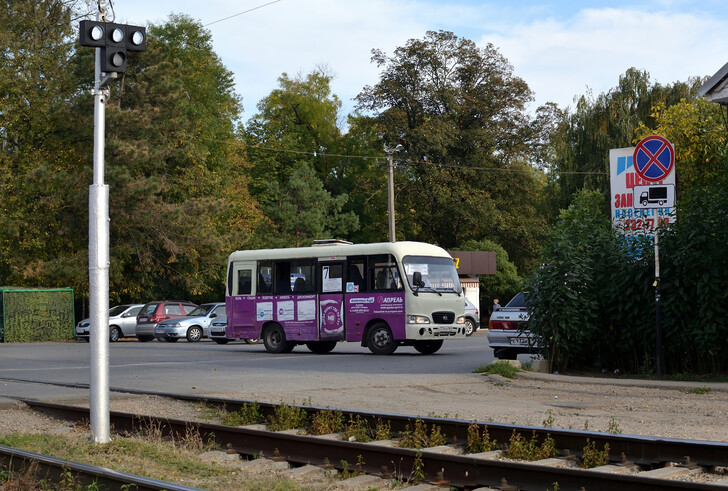 The second most important railway station serves suburban trains. The distance to the airport is 17 km.

Without changes you can get on the bus number 7. However, the stop is in 500 meters from the station – “Cinema “Aurora”. To the airport it takes at least 1 hour, or even more.

The route is served by a private office “Krasnodaravtotrans”. Bus service is provided by PAZ buses, designed for 40 passengers.

Clear schedule, as with all private carriers, there is no. Working time is approximately from 06:30 to 22:30. The declared interval of movement – 20 minutes, but in fact the bus runs once 40-60 minutes.

The cost of the ticket – 30 rubles. Payment is by cash.

How to get from bus station to Krasnodar airport

There are two bus stations in the city. If you want to get to Krasnodar from the Airport there is a bus station in Krasnodar. Therefore you need to take trolleybus #7 (see above).

The Southern bus station is located near Yablonovsky bridge, 17 km from the airport. The trip supposes changing the route. First you have to take a minibus № 44 at the stop “Southern Bus Station”. Get off at the stop “Perevarny peregulyok” (journey 25 minutes) and change to trolleybus #7 here (journey 30 minutes) or to the mini-bus #30.

You can call one of the local taxi companies. It is easy to find their contacts on the Internet. Among the advantages of official services (compared to private drivers) are a guarantee of safety, reliability and accountability.

Another option to get a cab is to order a car through an online aggregator, a special application on your smartphone. In Krasnodar, there are such large companies as “Citimobile” and Uber. It should be noted that during peak hours the number of available cars is reduced, and the wait may be extended, which is undesirable – there is a risk of not being in time for registration. In addition, the high demand increases and the cost of travel – in 1.5-2 times.

The most reliable option – pre-booked transfer service from KiwiTaxi, which works with proven carriers throughout Russia and the world. The driver will be waiting at a specified location at a specified time. You can book a cab up to 16 hours before the trip, and premium cars and vans – a day. The cost is fixed, it includes a 15-minute waiting time. Payment – on site or in cash to the driver.

READ
Honestly about Dzhemete! Reviews about rest and prices - 2022

Krasnodar Pashkovsky airport and how to get to the city

Krasnodar Pashkovsky International Airport is one of the ten busiest airports in Russia. From this article you will learn how to get from the airport to the city center, to the railway station and the central bus station, as well as where to stay nearby. But we will start with a detailed description of the airport itself.

What airport in Krasnodar

Pashkovsky Airport is located at a distance of 12 km from the center of Krasnodar and is the second busiest in the south of Russia after the airport in Sochi. Every year the airport receives more than 4 million people. 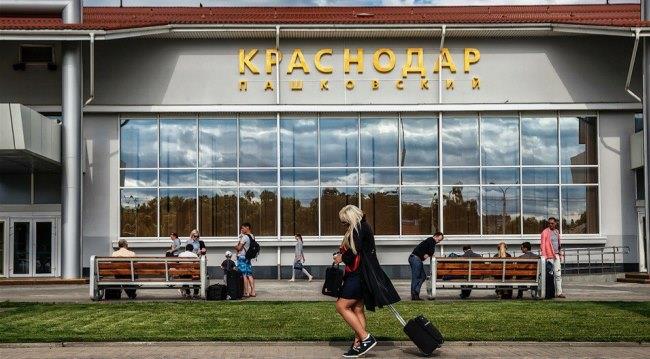 Krasnodar airport is one of the ten busiest airports in Russia

Both terminals have all the necessary services for comfortable waiting for your flight. Inside there are a variety of snacks, bars and coffee shops, clothing stores, souvenir shops and even a supermarket of children’s products.

Free Wi-Fi is available throughout the airport terminal. The domestic airlines lounge has offices of several banks, payment terminals, a pharmacy, and a mother and baby room. Both terminals are equipped with medical points and changing rooms. 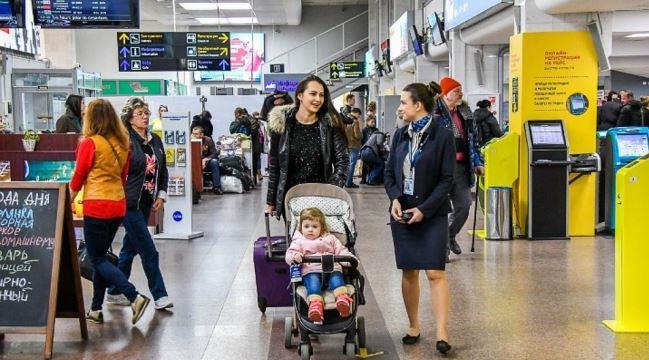 There are two passenger terminals at the airport: for domestic and international airlines

If you are worried about the safety of your bags, you can use the luggage packing service – 600 rubles per unit (2020).

There is a luggage room at the airport, but it is located outside the passenger terminals – at the station square, on the right side of the trolleybus stop. The fee for storage of one suitcase is 400 rubles for the first day and 200 rubles for each subsequent day.

The nearest major airports near Krasnodar [besides Pashkovsky] are in Anapa and Adler (Sochi). The distance from Krasnodar Airport to Anapa is 184 km, and to Sochi Airport, 308 km.

Hotels in the vicinity

There is a very good choice of hotels close to Krasnodar airport, so if you take an early or late flight, you will have no problem with accommodation. About the most interesting options we will say a few words separately.

READ
Honestly about Olginka. Reviews about rest and prices - 2022

A complete list of hotels near Krasnodar’s Pashkovsky Airport with room photos, location on the map and guest reviews can be found on this page.

Cheap airfare to Krasnodar is easiest to track with a specialized low price calendar.

Pashkovsky airport is quite compact, but it is easier to navigate on the spot with the schemes. 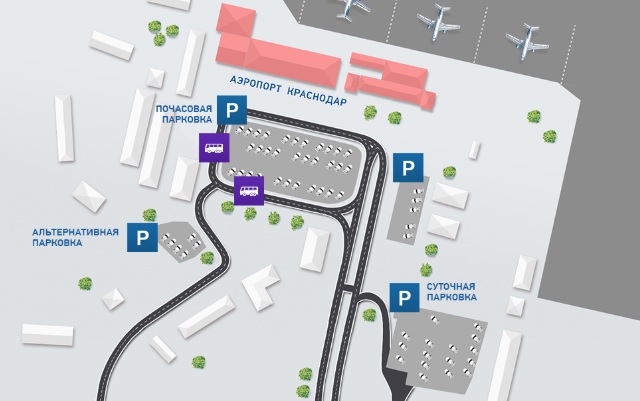 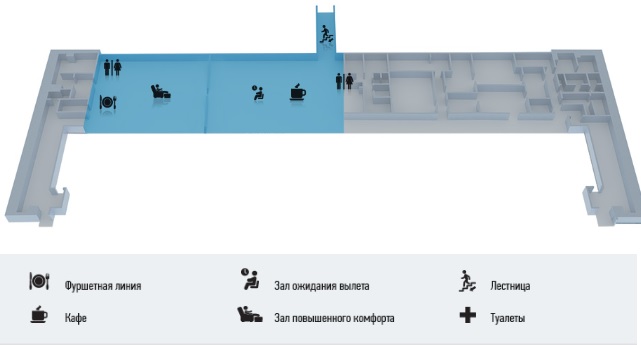 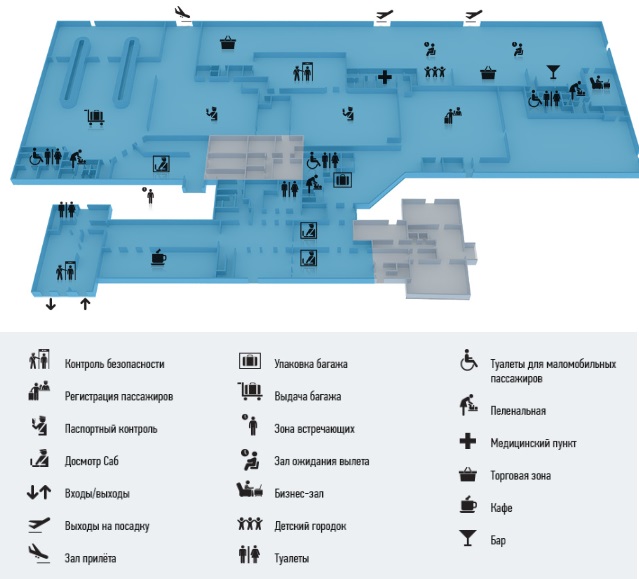 Krasnodar airport on the map

Krasnodar airport is located within the city, so you can easily get to the center, bus or train station from there. About all available ways to get to the right place we tell below.

Cab from Pashkovsky airport to the city

Although Pashkovsky airport is very close to the center of Krasnodar, cab is the most convenient and easy way to get to the city, especially for passengers with large luggage or small children. Travel time from the airport to the center – about 20-25 minutes. 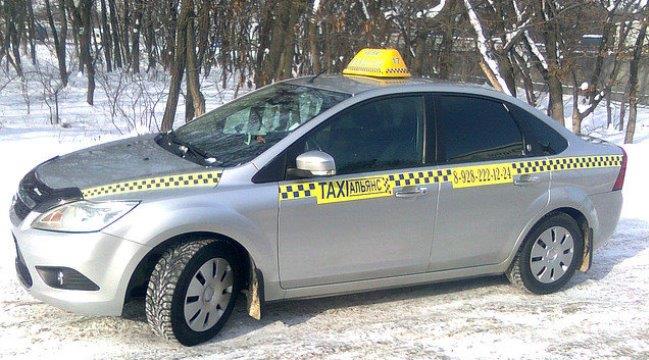 Usually the best way is to catch a private driver near the airport, there are always plenty of them. However, this trip can end up costing you a pretty penny, since these carriers do not have a clear tariff and the price often depends on the driver’s honesty.

You can order an official cab, accredited by the airport, in the control room on the first floor. Or you can use the services of a shuttle service and order a car in advance on a specialized website. The main advantage of ordering online is a fixed price, which is known even before the payment.

Moreover, even in the case of a delayed flight (and anything happens) no additional payment is required. The service independently monitors the arrival boards and sends a car just in time for the arrival of the flight to avoid delays in parking. The driver will meet you with a nameplate in the arrivals hall.

Check the current rates of cab from Krasnodar Pashkovsky airport to the center, bus station, train station or other place in the neighborhood and also to order a car you can on the official website of the service.

Buses and trolleybuses to the train station

Since the airport is located within the city, it serves mostly public transport, and a number of routes allows convenient access not only to the center, but also directly to the train station.

Here be careful, because there are two passenger train stations in the city: Krasnodar-1 and Krasnodar-2. The main and larger is Krasnodar-1, but for some suburban trains may be more convenient station Krasnodar-2. 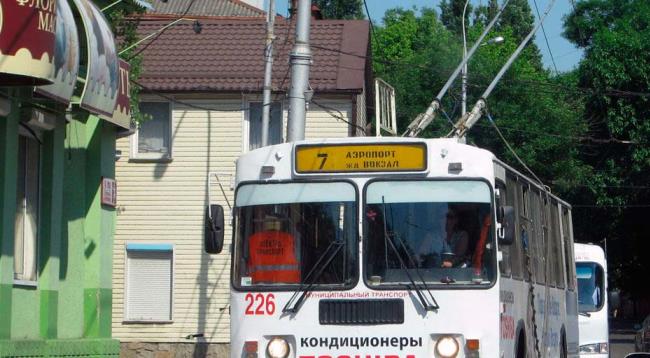 You can get to the train station by trolleybus number 7

Now let’s understand how to get from Krasnodar airport to the desired railway station.

Bus and trolley buses to the bus station

READ
How to rest in Sochi in winter - 10 ideas. Weather and prices

It is located on Privokzalnaya square in 5 minutes walk from Krasnodar-1 station. Therefore you can get from the airport to the central bus station by the same routes as to the main railway station, namely – by minibus №53 or trolleybus №7.

Rent a car at the airport of Krasnodar

Another way to get from Krasnodar airport to the city center or even to the Black Sea coast is to rent a car. In the terminal building there are stands of several rental companies, both local and international, so you can conclude a rental agreement right there. 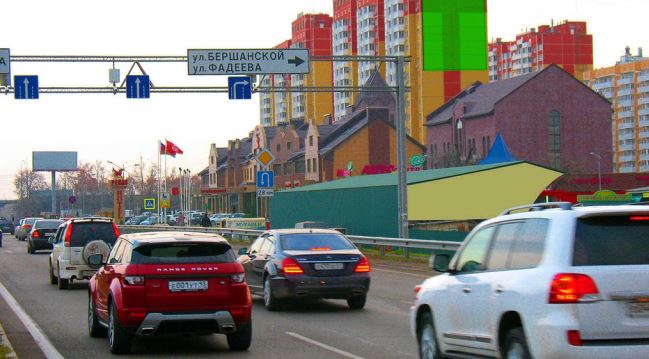 Renting a car in the terminal has its disadvantages. In particular, the poor choice. In fact, the car rental market in Krasnodar is not limited to the companies represented at the airport, and the conditions of these renters can often be even better.

Therefore, it always makes sense to check the rental conditions through a specialized online price comparison service. The database of the system includes not only offices at the airport, but also in all of the surrounding areas. Data on car availability and prices are updated regularly, and all conditions are brought to a single view.

In most cases, renting through the price comparison service allows you to save a lot of money. Check the range of available cars in Krasnodar airport, the prices and the conditions of the renters, as well as book a car for your arrival can be found on this page.