While studying the sights of Lazarevskoye, we turned our attention to a nearby recreational site called Mamedovo Gorge in the village of Mamedova Slit, which can be reached on foot: After a more detailed study of the area it became clear that we have to walk not far (2.4 km), but uphill and along the highway, so we decided to take a minibus: The easiest way to get there on foot is to wait for the bus number 160, which goes from Lazarevskoe railway station to Shepsie, and get to the bus stop “Mamedova Slit”. The fare from the stop “New” to “Mamedova slit” in June 2017 was 23 or 24 rubles (I do not remember exactly) per person. For the lazy there is a bus 162, which goes to the Upper Mamedka once every 3 hours. Back we rode on it – by chance the time coincided. The fare is a little bit more expensive, seems 34 rubles, I do not remember exactly. By car is even easier – you can reach each route by car – there are parking lots near the ticket office, the road is good.

The facility actually includes three different routes or trails. The entrance to the first one is literally 20 meters from the stop “Mamedova slit” on the way and is called “Berendeyevo kingdom” (we did not take a photo, so I take it from Yandex): From the reviews on the network learned that this route is considered a children’s route, due to the small length and simplicity. We are not looking for easy ways, so we decided to go further directly to the village and Mammadov gorge. By the way, the entrance to each route is paid and costs 100 rubles. Judging by the tickets, the trails are served by different IEs.

To get to the other two routes you have to walk 2-3 kilometers from the bus stop straight up (the main route turns left). Or wait for shuttle 162 and go to Upper Mamedka. For better understanding here is a scheme that you will meet on the way: To get lost there is difficult – the road is the same, there are signs. The way goes through the village of Lower Mamedka with interesting houses or rather bridges over the river Kuapse. There are both fixed and suspended bridges of dubious durability.

As it is indicated on the scheme, first you will meet the first ticket office of the route “Legends of Mammad” at the road branch: For those in the mood for a long hike, I recommend passing/passing it further up the road. There will be another checkout for the SAME route: You can enter and exit this trail from either side. Here you can see “Grandpa Mamed’s Tears” waterfall: “Devil’s Bridge” and the rockfall on the river, which appears to have been formed on the site of the old trail. There is also a dolmen and a “Tree of Wishes”.

If you want to reach/drive up to the gorge, you can skip this checkpoint too and walk/drive up the road until you get to the sign: “Mammadov Gorge”. The most interesting and beautiful places are on this route, so I recommend first of all to visit it, and already on the way back, if there is energy left, it is possible to glance on “Legends of Mamed”, entering the path from the upper ticket office and going out from the lower one.

We forgot to take pictures of the entrance to the trail “Mammadov Gorge”, so I will post a schematic diagram, it will be easy to find it: By the way, I would not call this trail difficult either. Yes, you will have to walk and even climb in some places. But it is in dry weather. We went to the gorge after the rain, and the trail was quite slippery in some places. There was a lot of mud on our sneakers, too. As a result, when we got to the Happiness, Youth and Love Falls:

READ
Holidays in Adler with children - 2022. Hotels with pool and all inclusive we decided to change our sandals, we took with us and we were right, because to see the most interesting places it is better to go back along the river bed of the Kuapse. Exactly there you will see this: The water in the river is cool, but your feet don’t get too cold, and in the heat it should be fun in general. If you do not want to get your feet wet or do not have suitable footwear, you can go back the same way you came to the waterfalls, but the most interesting thing you will not see.

In general in my opinion this place is quite interesting, and since the price of a symbolic visit, it is quite possible to have a look, if you ride on the way or have a rest in Lazarevskoe. The main thing to choose the right shoes: comfortable, with good grip, which can get wet. 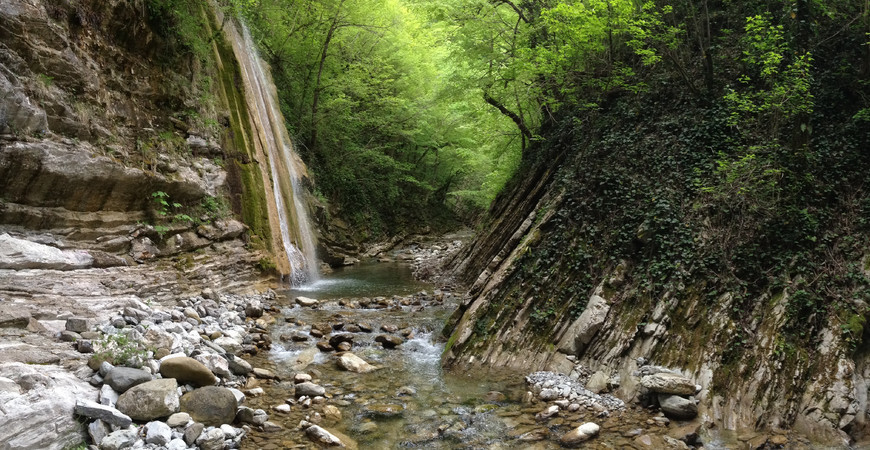 Mamedovo Gorge in Lazarevskoe is named after the hero of local legends. People say the old man Mamed managed to protect his village from the Turks: he showed the villagers where to hide, and tricked the raiders and led them to the trail over the precipice. The brave old man managed to stab the leader of the Turks with a dagger, but died himself – his head was cut off. The legend was recorded in 1967, but the exact time of the action has not been established.

The memory of intrepid Mamed lives on not only in the orally transmitted legend and the name of the gorge. Over time, the most striking natural attractions of the gorge have become part of the legend: you can see the stone Head of Mamed, a picturesque waterfall Beard of Mamed and the natural bath of Mamed’s font. The inhabitants point out the strange-shaped stone block of boulders, calling this place the grave of the great elder-protector. However, this is only one of the versions, according to another, the Turks embittered after long vain wanderings immured him in a recess of the cliff.

The Mamedov Gorge hiking trail runs along the bottom of a river-cut canyon called Kuapse.

The landscape of these places includes natural niches and cauldrons, arches and tunnels, fanciful accretions and calcareous cornices. The nature of the canyon is represented by 120 species of plants, including rare conifers and deciduous trees, representatives of the Red Book.

The trail leads to a beautiful stone canyon, above which the rocks of white limestone rise 15 meters. This place is called White Hall.

If you go higher, you can get to the beautiful waterfall, which has three cascades (the total height of the water fall is 15 meters). The power of the mountain river has broken through the rocks in three depressions, resembling bowls. Locals have even given each bowl its own name (“Health and Youth”, “Beauty”, “Love”). Here believe that the water in the bowls of healing and helps to find what you need. It is enough just to dip into that bowl, which qualities you are particularly lacking at the moment. And going back from the gorge, you can also get into the grotto of happiness.

At the foot at the beginning of the route in the gorge is a cozy outdoor cafe. Here you can gain strength or, on the contrary, have a rest after the route. Owners of the cafe offer traditional herbal tea, mountain honey and pancakes.

Another interesting sight of Mamedov Gorge in Lazarevskoye is an ancient dolmen of a solid block. It is easy to notice when you walk along the trail – the dolmen hangs over the river.

The history of the appearance of dolmens in different parts of the world has many versions, but none of them has ever been proved conclusively. The local dolmen resembles a pyramid.

At the equinoxes (of which there are two in a year) the top of dolmen shows the exact place where the sun will rise. However, the wonders do not end there.

It is said that a visit to the dolmen has healing powers: it gets rid of childlessness, severe diseases and even helps to quit smoking.

In addition, there are preserved artifacts of Adygean gardens and mounds with flat boulders, which had occult meaning.

Mammadov Gorge is also accessible to independent hikers in winter. However, experienced travelers warn: do not visit the gorge in rainy weather or immediately after showers, as it becomes slippery and dangerous to move along the route.

If you go to see Mammadov Gorge, combine this trip with a tour of Berendeyevo kingdom, they are very close to each other.

Many people will find this place very familiar – “The Snow Maiden” (based on the work of Alexander Ostrovsky) was filmed here. Everything in the kingdom has received the names of the characters of the fairy tale, for example, the waterfall was named “Berendey’s Beard”.

In total, a tour around Berendey’s kingdom is almost 3 kilometers, which you can walk through the beautiful natural scenery. The first part (about 500 meters) you walk along a specially equipped trail in the gorge, enjoying the incredibly scenic views around: waterfalls, bridges, cute benches for relaxing. The second part of the trail is significantly longer. The forest path will take you to the observation platform on the Unnamed Mountain.

How to get to Mamedov Gorge

From the center of Lazarevskoye there is about 7 kilometers to Mammadov Gorge. You may get there by foot and also by public transport: take a bus or fixed-route cab №162 to the bus stop “Kuren” (on other maps it is also called “Cafe U Lyeshego”), it is recommended to ask the driver about the exit nearest to the trail of Mamedov Gorge.

The attraction is also easily accessible to those who get there by car – the main way from Sochi and nearest resorts is along the coastal highway A-147, only a very small part is along the local road towards Mamedova Gorge.

READ
Holidays in Krasnodar Krai in the winter season 2021-2022

The walking tourist route along Mamedov Gorge is not at all complicated and suitable for beginners. The total length of the hiking route along the river Kuapse – only 1.5 km.

Since Mamedovo Gorge in Lazarevskoe is part of Sochi National Park, the passage to it is paid – 100 rubles (the amount of environmental fees in the park).