What to see and do on Nevsky Prospekt in St. Petersburg

Nevsky is considered the main avenue of St. Petersburg. It’s always a lively place and many tourists begin their acquaintance with the city from this street. The main aim of this place is to walk along the Nevsky Prospect and to see as many local sights as possible.

Each building has its own history

On Nevsky is full of old buildings, sometimes even those who have lived in the city for several years cannot tell the story of each of them. But to admire the houses where aristocrats, poets and other people of the past lived is a must.

Separately, we recommend to pay attention to the symbols of the city, which are located on the avenue.

Be sure to reach the Admiralty. You will see it as soon as you leave the Metro “Nevsky Prospect”. Nowadays in the Admiralty building there is the main headquarters of the Navy.

Next you can go to Dvortsovaya Square. It is located on the right side of the Admiralty and is a must-see for all guests of the Northern Capital. Palace Square was built in the middle of the eighteenth century and is still considered one of the most beautiful architectural ensembles in the world.

The Stroganoff Palace, now a branch of the Russian Museum, is situated here. The most famous of course is the facade of the palace – it is decorated with caryatids and on its top is the Stroganov coat of arms.

If you walk a little further from the palace, you can see the famous Kazan Cathedral. It was built in the beginning of XIX century, and inside there are still decorations preserved, by which you can study the history of past times.

The Savior on Spilled Blood

Sooner or later, during a walk along Nevsky, you will definitely see the legendary Savior on the Blood – it is one of the most famous sights of St. Petersburg. What is interesting – this temple belongs to the pseudo-Russian style. The essence of the style is that the architects specifically imitate ancient Russian architecture.

READ
Night tours of St. Petersburg - 7 the most interesting

The Nevsky district is full of a variety of museums. We recommend that you visit the most famous ones.

A visit to the Hermitage is an obligatory part of the cultural program of any guest to the Northern Capital. As part of a tour, you will have the opportunity to walk through six historic buildings, view the famous architectural ensemble, and see one of the largest collections of works of art.

View of the Mikhailovsky Palace.

Mikhailovsky Palace houses the main collections of the Russian Museum. So if you do not have a lot of time to walk around all the exhibitions of the largest museum of Russian art in the world, then feel free to go in the direction of the palace.

You can also look into the apartment, which was rented by Alexander Sergeyevich Pushkin’s family since the fall of 1836. Here you can not only look at the environment in which the Pushkins lived, but also see things that are associated with the duel of the poet and writer.

When you get tired of the city noise, go to the park. There are quite a few park areas on Nevsky. We recommend visiting some of them by all means.

Go to the Summer Garden of Peter the Great. Here you can not only walk and sit on benches, but also admire a huge number of flower compositions, ancient monuments and elegant fountains. This park is very reminiscent of the scenery of a fairy tale movie.

You can also visit St. Michael’s garden. On an area of 10 hectares is one of the most famous and well-appointed parks of St. Petersburg. Here you can walk through the wide alleys, read a book while sitting on a bench or walk along the river. And if you’re lucky, you’ll get to one of the landscaping festivals.

READ
12 unusual and beautiful apartments for tourists in St. Petersburg

Field of Mars is more suitable for those who are looking for a place to eat and do not mind to lie on the lawn. There is a place for absolutely everyone. We advise to get together, take a pizza or any other delicious food and go here for a picnic.

Walks on bridges and quays

A calling card of St. Petersburg – a lot of channels and bridges. So, you can safely start your journey on St. Petersburg bridges right on the Nevsky.

Start with the green bridge. Go to the Moika River and look for a bridge of green color – this is what you need. It appeared in the 18th century and was painted at the same time.

Another rather famous bridge is over the Griboyedov Canal. It was built in 1739. At that time it was wooden and called “Rozhdestvensky” because of the church of the same name. When the famous Kazan Cathedral appeared near Griboyedov Embankment, the bridge was quickly renamed.

The monuments with the video horses appeared on the bridge in 1841, and the architect named Klodt worked on them. What’s interesting – the horses on different sides of the bridge are different from each other. Initially, they were supposed to be similar, but each new batch of the end of the tsar’s family constantly gave to someone, and then the architect decided to create new monuments.

While walking along Nevsky, be sure to stop by one of the local bakeries or grab a bite to eat at one of St. Petersburg’s restaurants.

READ
What to bring from St. Petersburg - the prices of gifts and souvenirs

Enjoying a delicious meal or fragrant coffee with a view of one of the rivers is an incomparable pleasure. 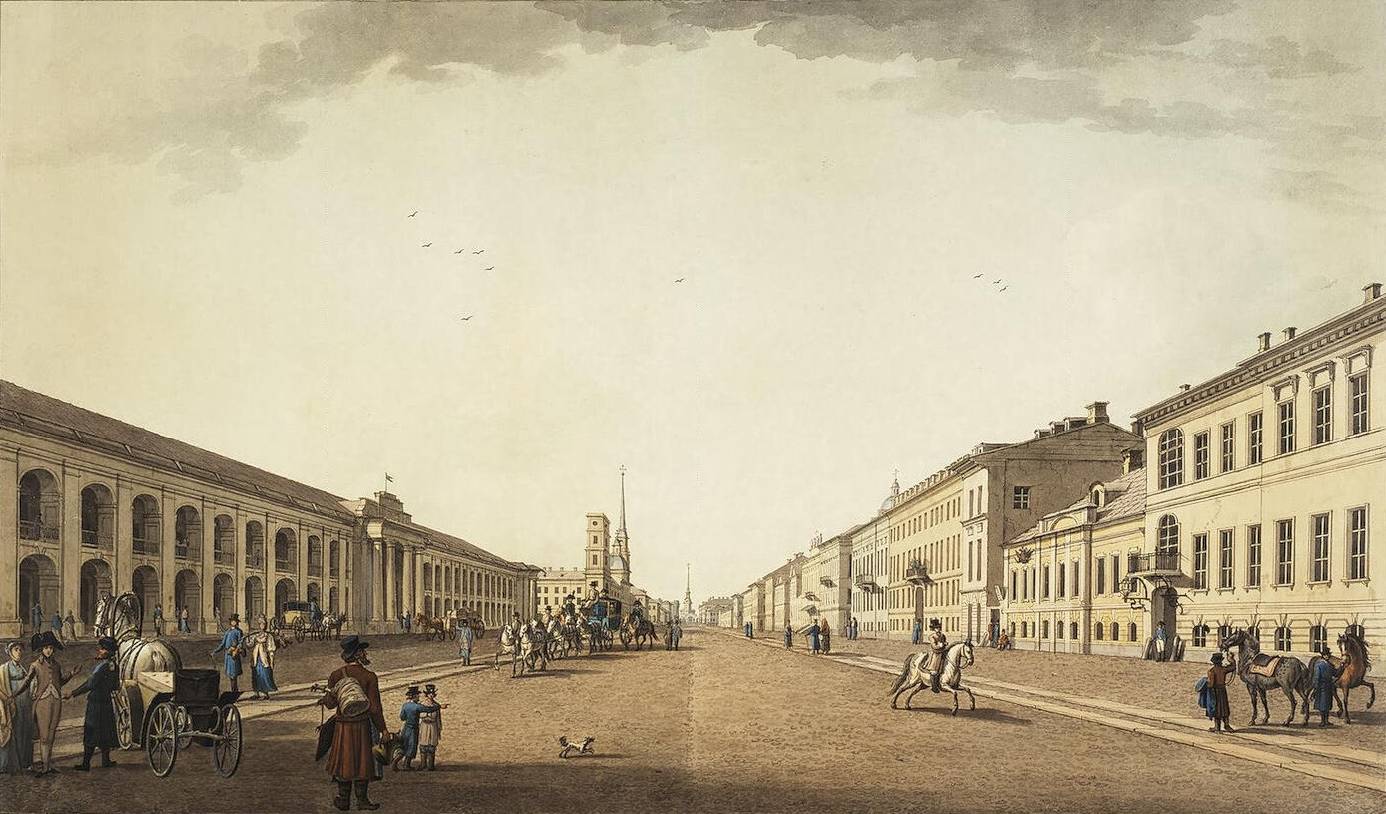 On the street, which stretches from the Admiralty to the Alexander Nevsky Lavra, you can see many historical and architectural masterpieces. On the avenue and a few steps from it are the best palaces, temples, monuments and bridges of St. Petersburg.

Since 1737 in the center of the city stood the Church of the Nativity, where military victories of the Russian army were celebrated. During the reign of Paul I it was decided to build on Nevsky Prospect a large temple on the type of St. Peter’s Cathedral in Rome. Construction took 10 years.

Kazan Cathedral is a cathedral temple and museum. Inside is the burial place of Field Marshal M.I. Kutuzov. Admire the grandiose colonnade, bronze sculptures and magnificent interiors! 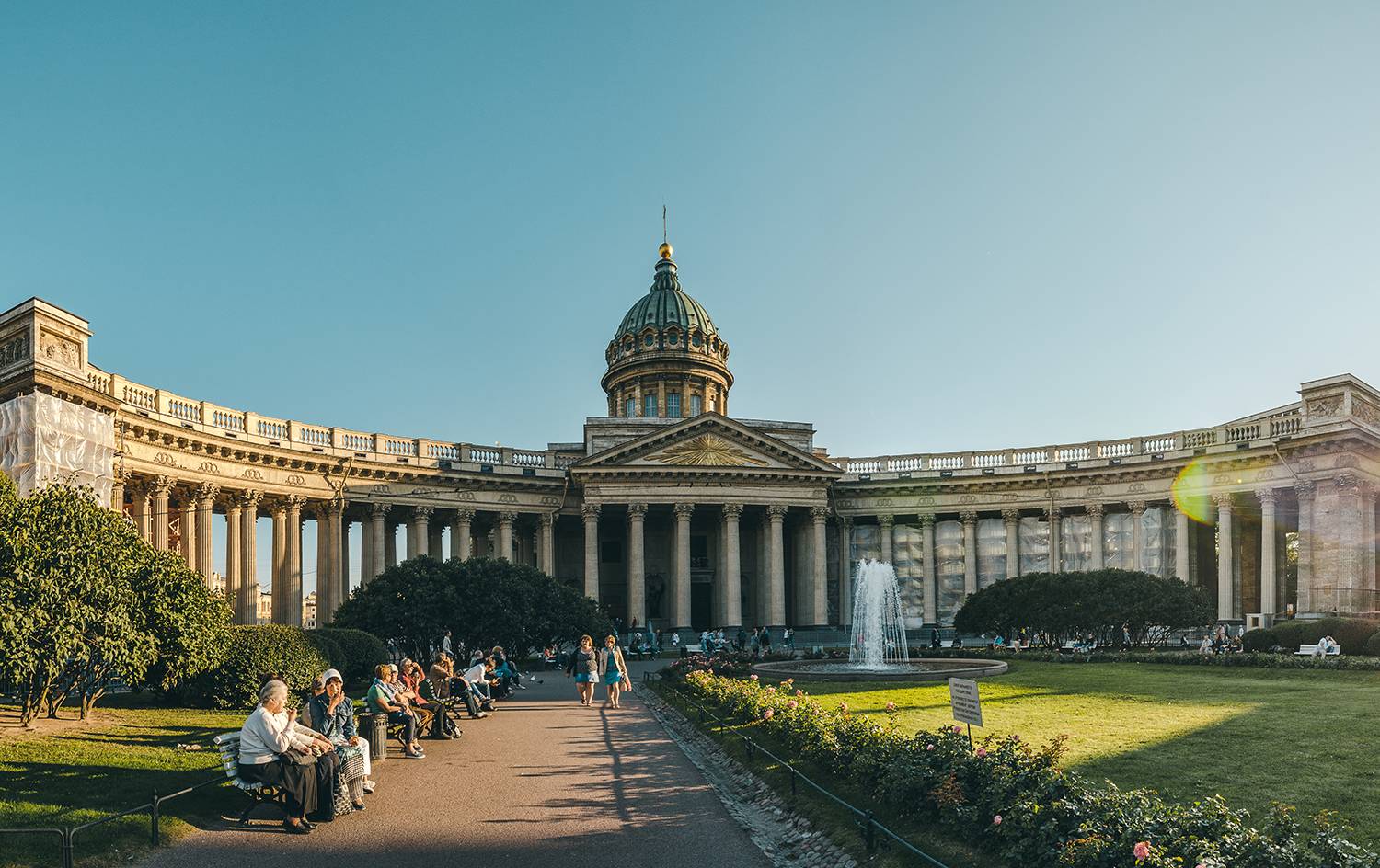 In 1742 baron S.G.Stroganov bought on the Nevsky avenue an unfinished two-story mansion. In the mid-18th century, the architect Francesco Rastrelli built a magnificent palace on the site of the mansion’s buildings and the Stroganoff estate became the center of St. Petersburg’s cultural life.

Today in the palace is a museum. Here you can see a unique Mineralogical Study, which was created by architect Voronikhin in the late XVIII century. The pride of the museum is an ample collection of decorative and applied art from the reign of Emperor Alexander I. 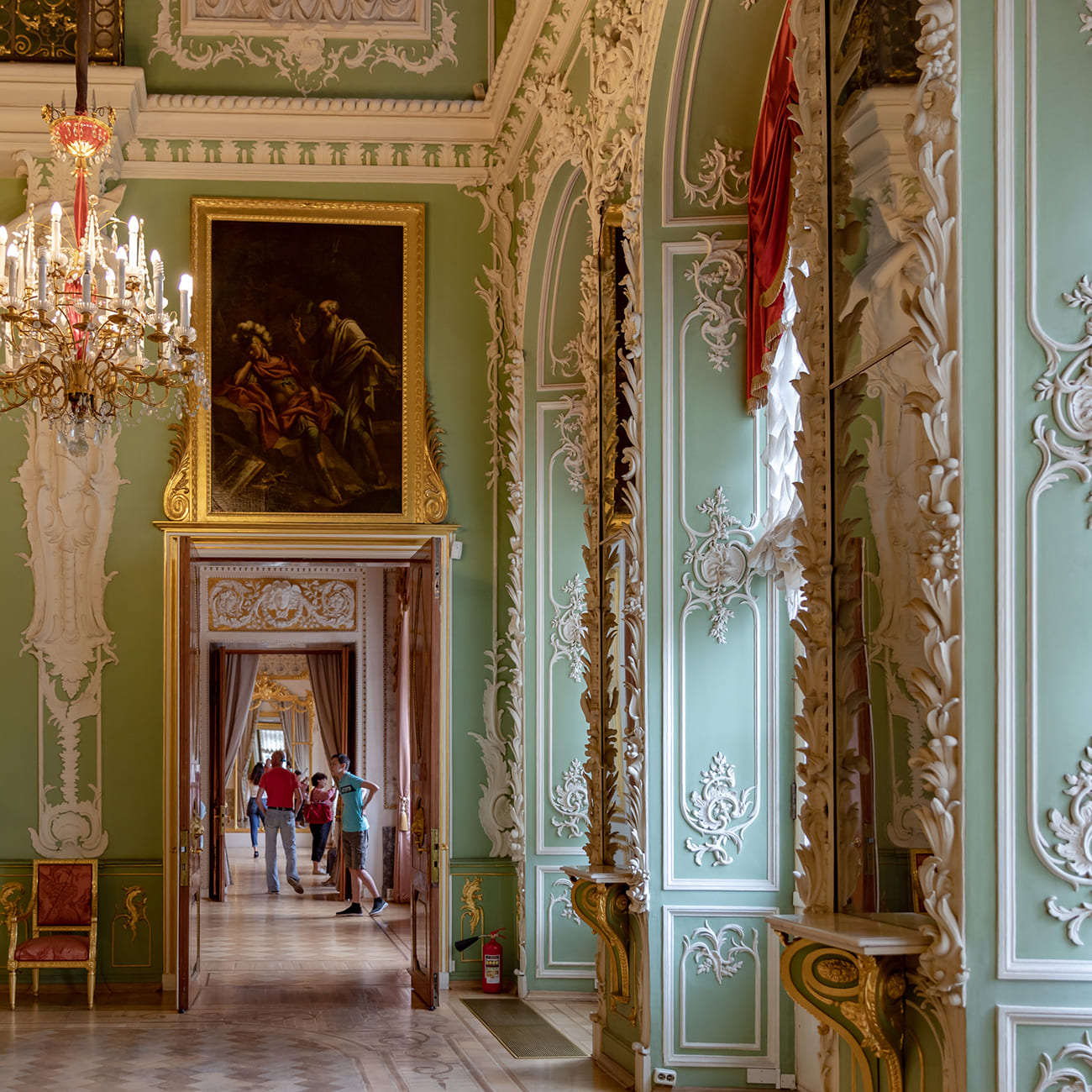 Interior of the Stroganov Palace. Photo: Ninara / flickr.com / CC BY 2.0.

One of the recognizable landmarks on Nevsky Prospekt, the Grand Gostiny Dvor, stretches for an entire block. The austere buildings in the style of early classicism were erected in 1785 according to the design of the French architect Vallen-Delamotte.

Gostiny Dvor in St. Petersburg is famous for being the first place where Radischev’s “From Petersburg to Moscow” was sold. Today there is a department store and fashion shows are held there. 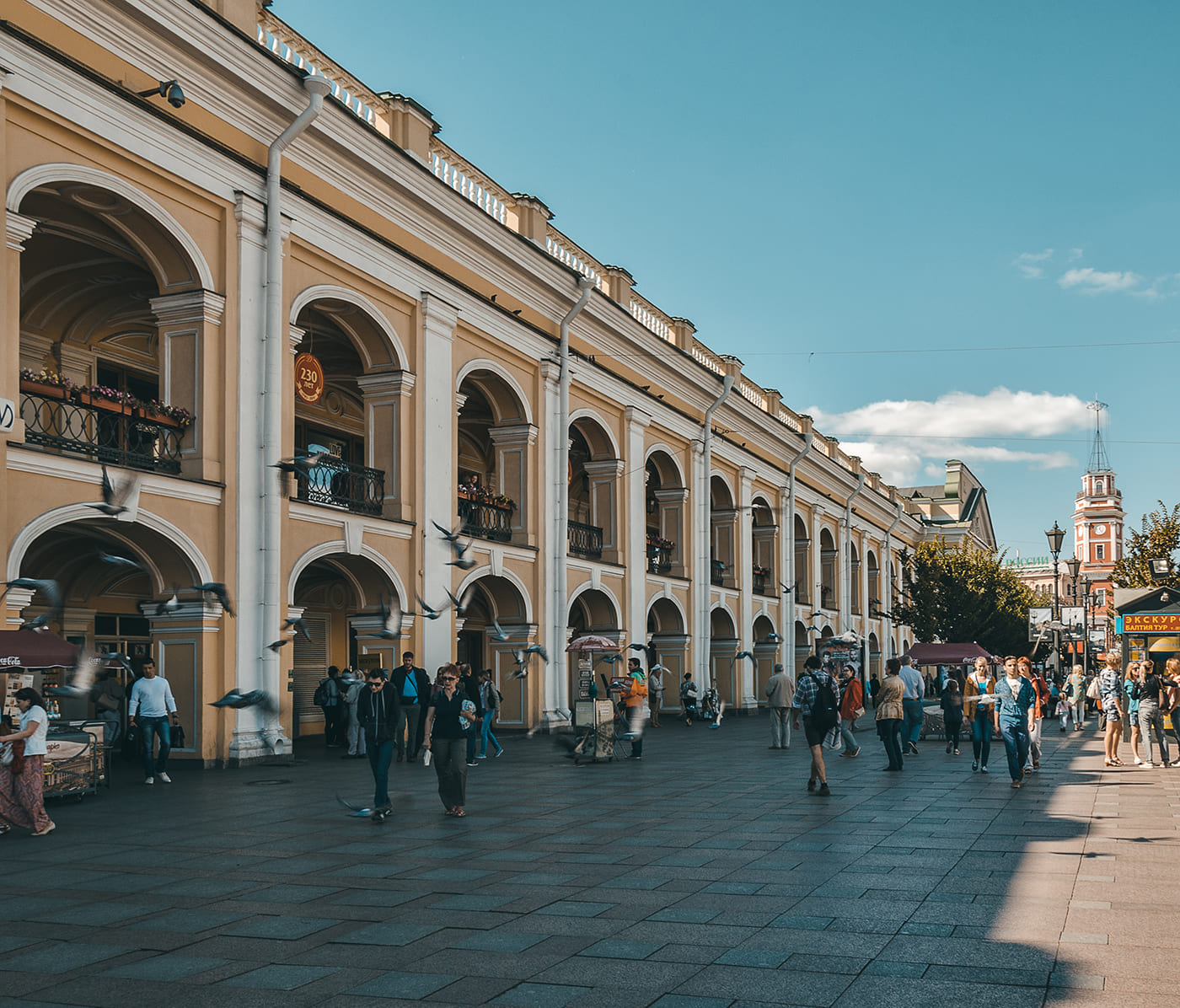 The small and cozy park is located in front of the Alexandria Theater. The Catherine Garden was founded in the 1820s, designed by architect Carlo Rossi. At first the green square was called Montmartre and “Katya’s garden”.

The idea to erect a monument to the Russian Empress was born in 1862, when Russia celebrated the 100th anniversary of Catherine II. Artist M. Mikeshin developed the project, and in 1873 the bronze monument took its place in the center of the green garden. 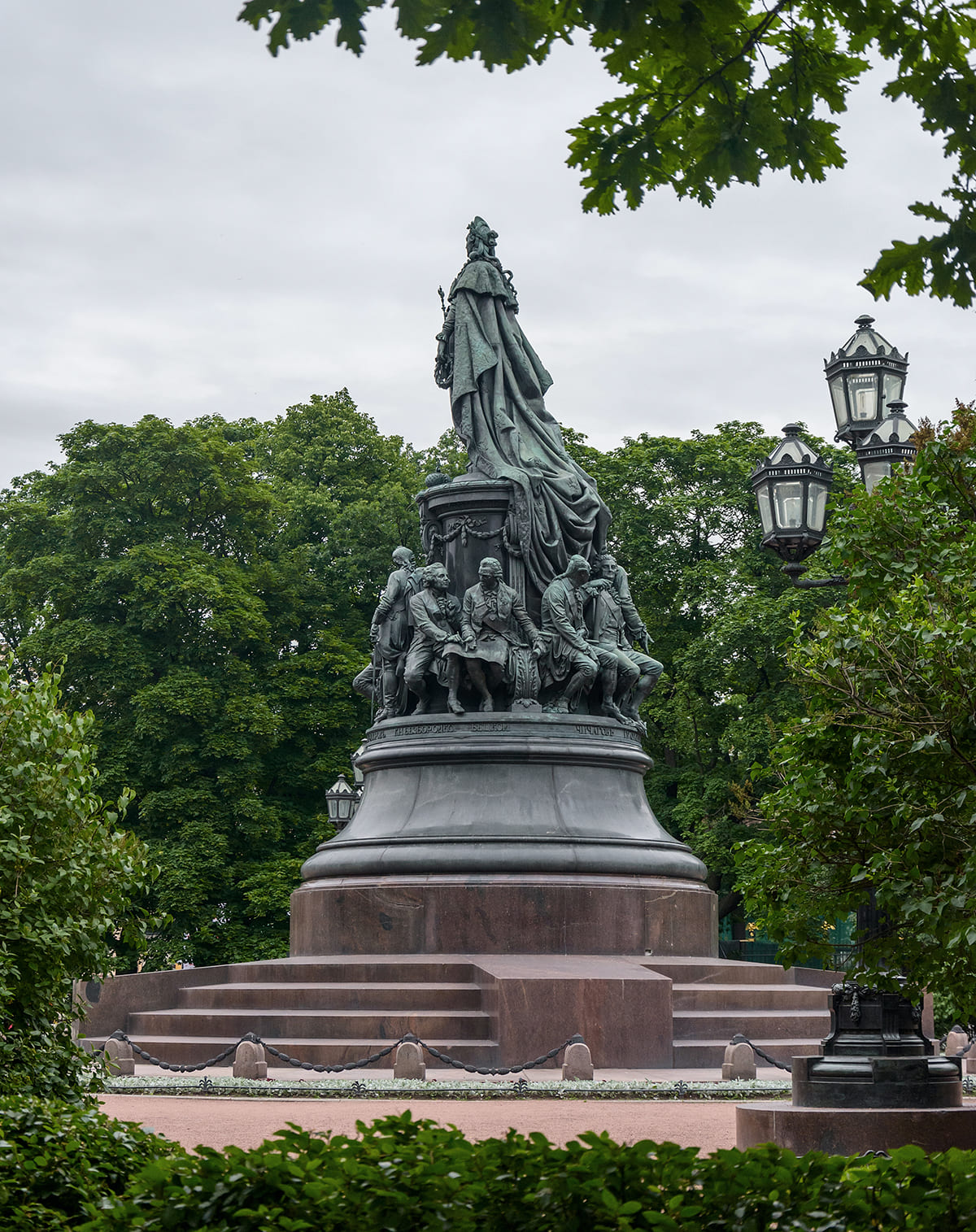 It’s impossible to imagine Nevsky Prospekt without the beautiful bridge over the Fontanka River, which is adorned with Klodt’s sculptures. St. Petersburg’s most photographed bridge was named after Lieutenant Colonel Engineer Mikhail Anichkov, who in the time of Peter the Great built crossings in the center of the city.

The first bronze horses appeared on the stone bridge in 1841. Clodt’s sculptures were so good that Nicholas I presented them several times to the noble nobles. 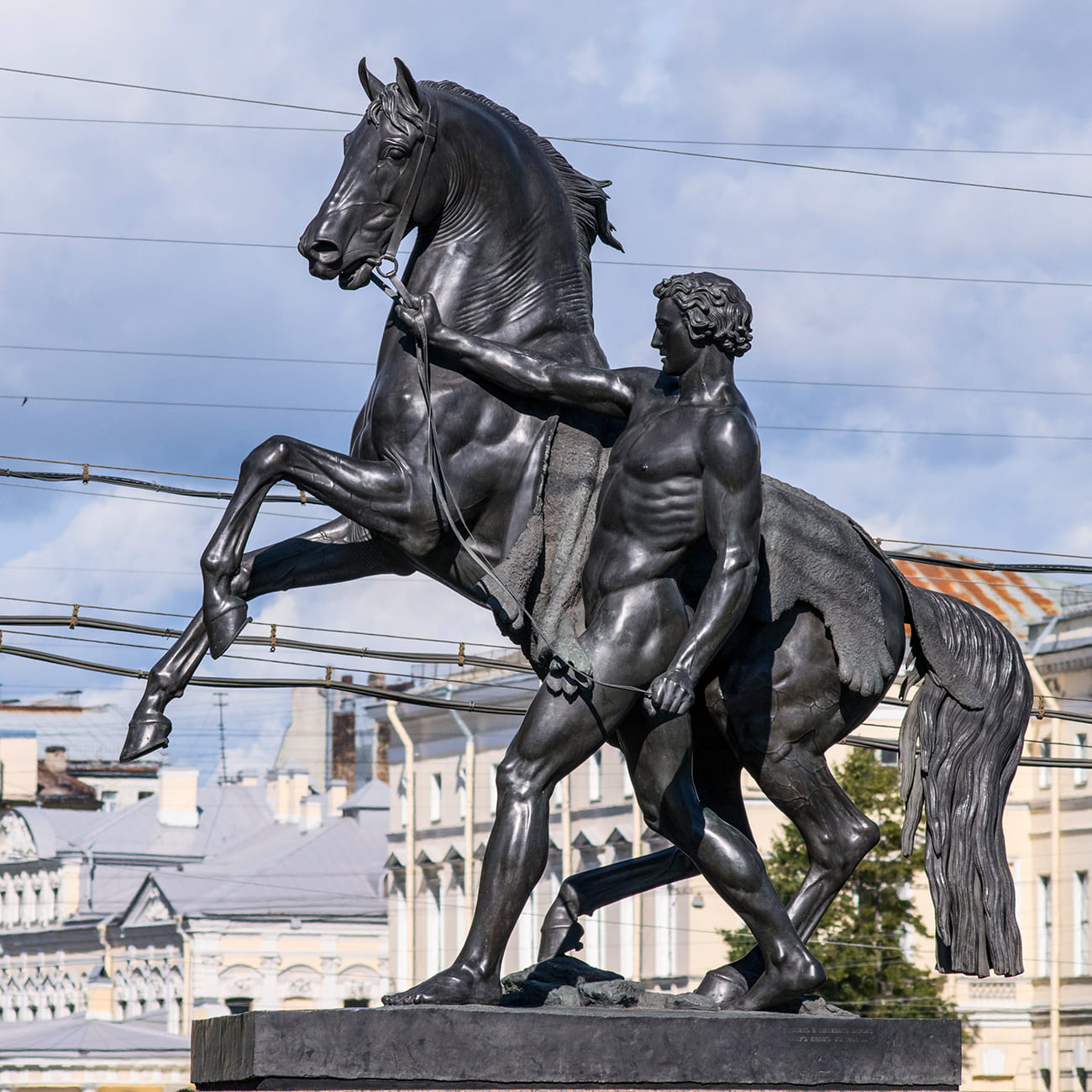 The sculpture “The Taming of the Horse by Man” on Anichkov Bridge. Photo: Florstein / flickr.com / CC BY-SA 4.0. 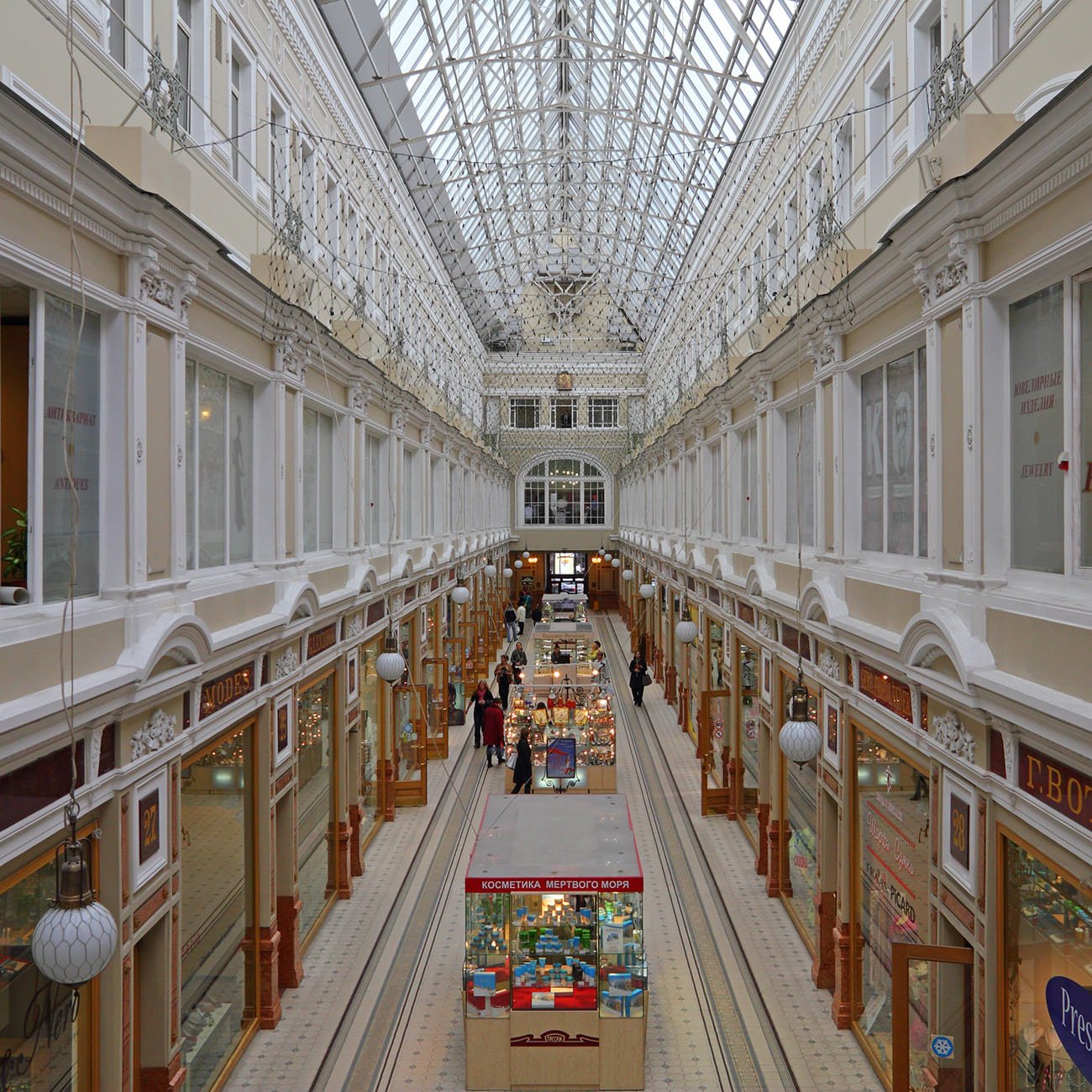 Where to eat on Nevsky Prospect

The main street pleases not only with monuments and palaces. There are many excellent restaurants and cafes. Here’s a list of places to eat on Nevsky Prospekt. Take a look at our selection of budget cafes on Nevsky Prospect.

One of the most affordable places to eat in St. Petersburg is Brynza on Nevsky Prospect, 50A. The cafe offers tasty food and fast service. The menu includes chebureks with different fillings, vinaigrettes, salads, hot dishes and delicious desserts. The only downside is that Brynza is always crowded and quite noisy.

This bistro is located on the first floor of the hotel “Oktyabrskaya” at 118, Nevsky Prospect. “The Nutcracker is famous for its own brewery and wooden furniture. Visitors praise peanuts in cheese, Munich sausages with stewed cabbage, baked pork with tomatoes and Kiev cutlets. 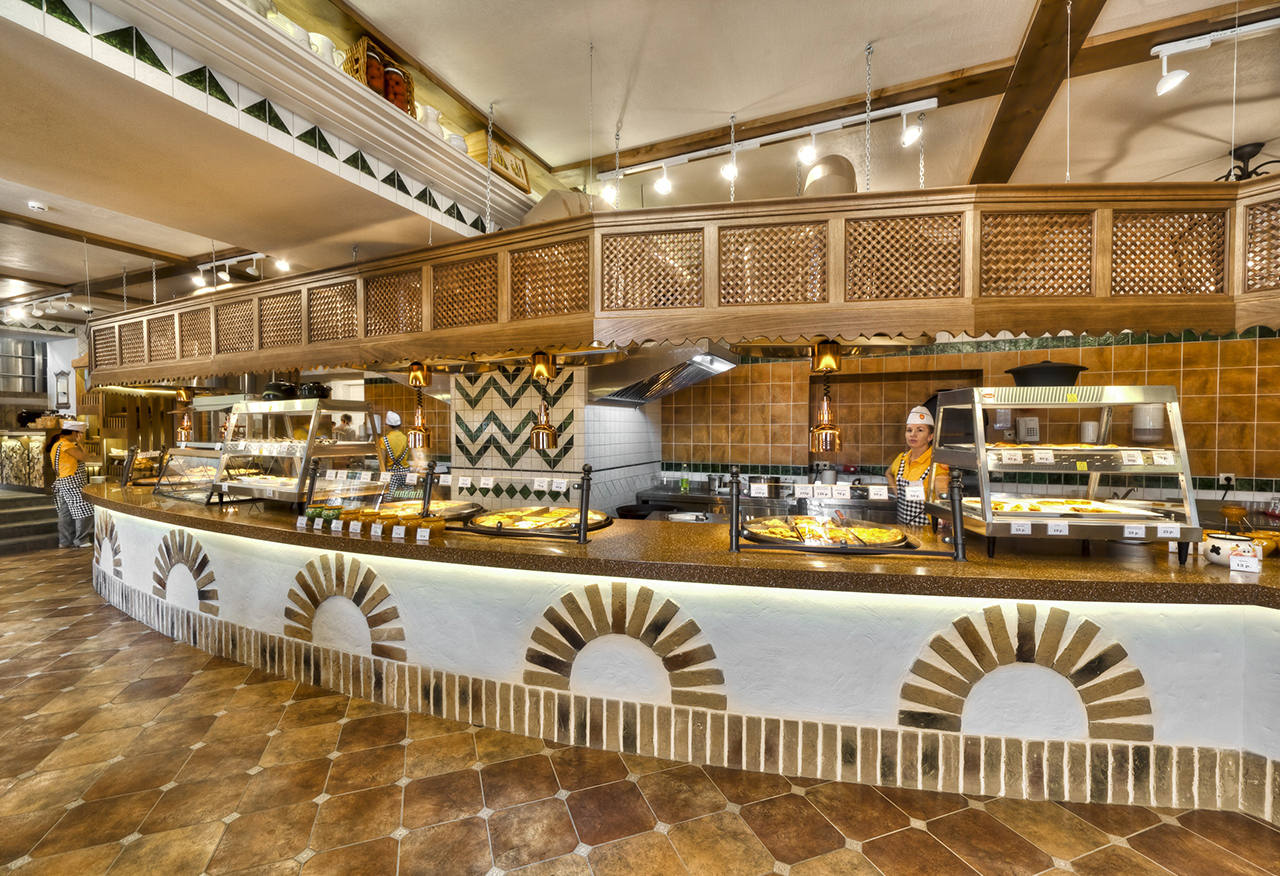 Asian street food on Nevsky, 95A, works under the motto “harmony of taste and goodness” and is liked by lovers of Korean cuisine. The establishment has a large selection of dishes for vegetarians. Try the burger on a pillow of rice, pibimbap with smoked salmon, yukkedang soup and the national dessert made of rice flour sunpyeong . 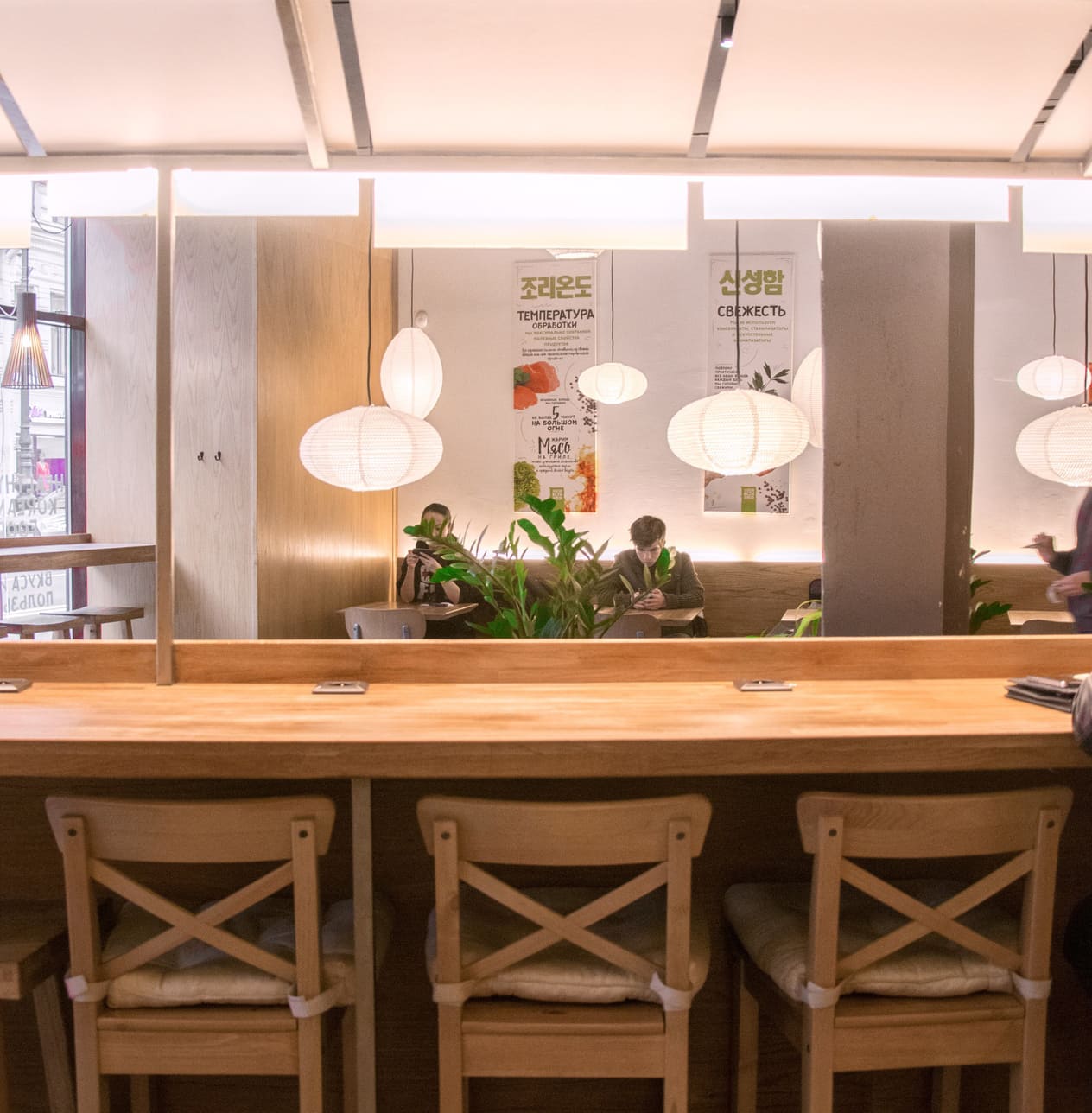 The first pelmenaya on Nevsky

The institution, where you can eat hearty homemade pelmeni, is located at the intersection of Nevsky Prospekt and Mayakovsky Street. They offer portions of dumplings with beef, chicken, pike, tiger prawns and ricotta in 5, 10 and 15 pieces, dumplings, pancakes, fragrant sea buckthorn tea and desserts. 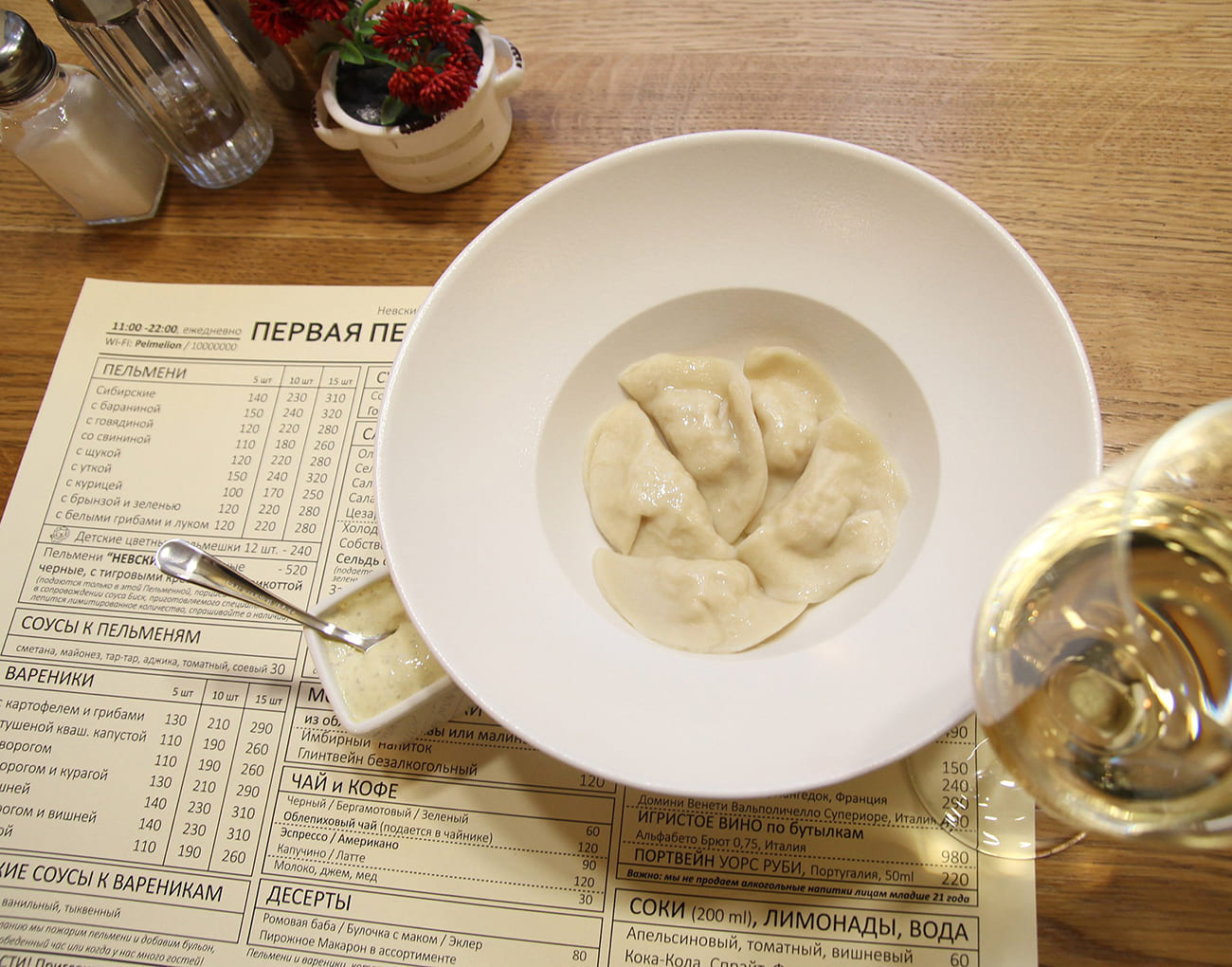 The most expensive portions of dumplings – Siberian, with duck, with lamb – 15 pieces for 320 rubles. Photo: vk.com/pervaya_pelmennaya.

Inexpensive chain cafe works on Nevsky Prospect, 136, and is famous for its excellent pancakes. The dish is made in a couple of minutes, so the service is fast. Hot pancakes are great with classic, herbal and fruit tea. 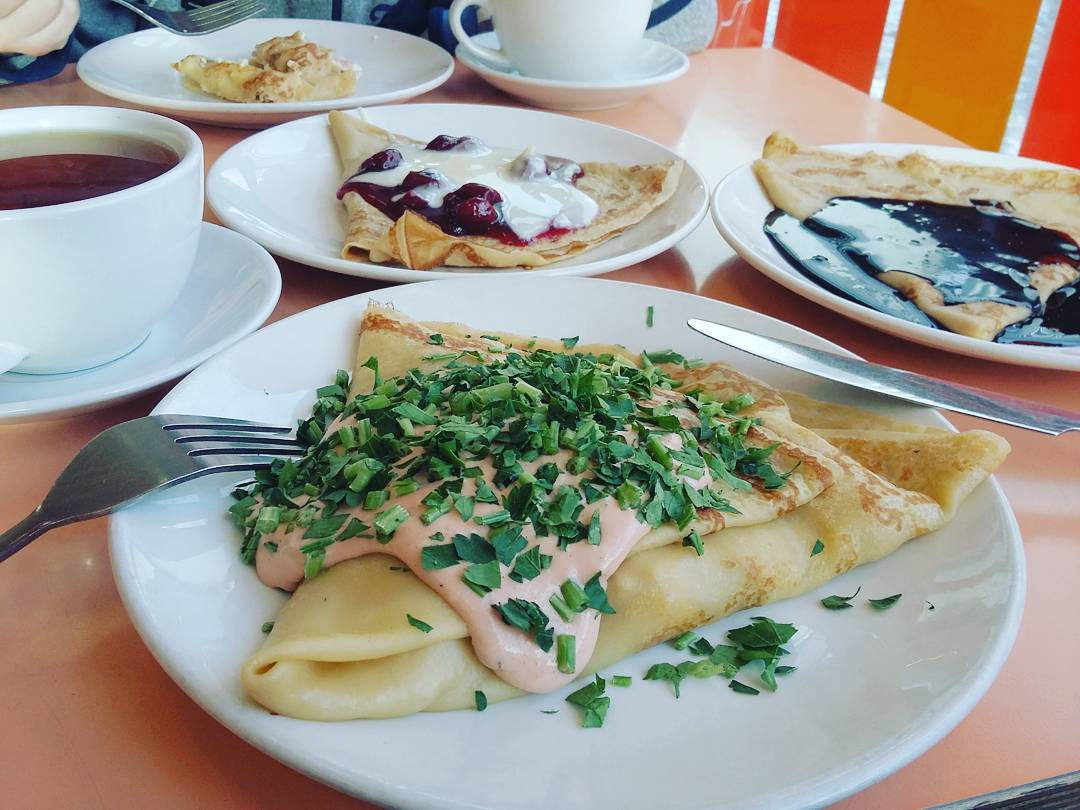