Places to travel in Cyprus by car 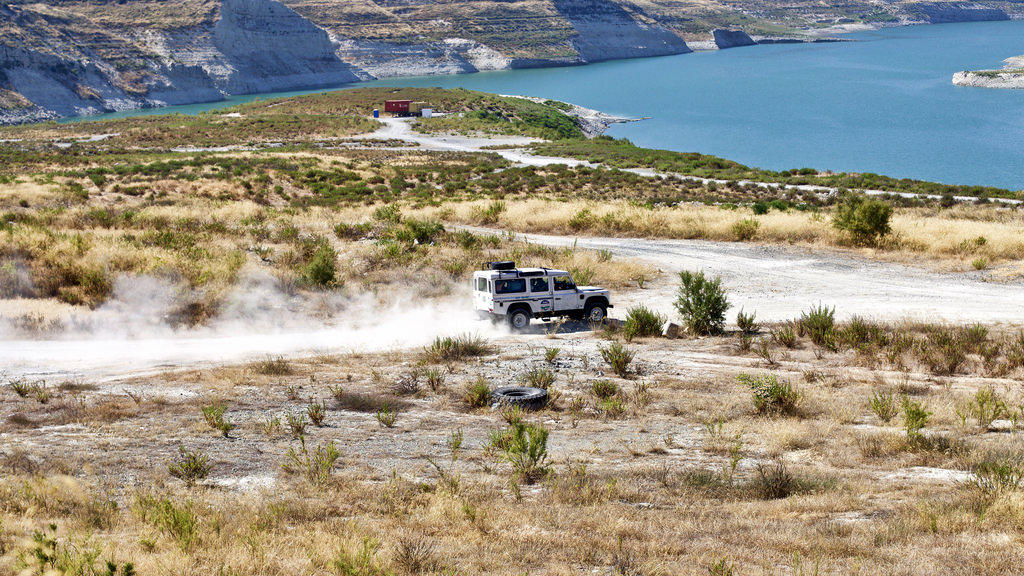 What to see in Cyprus and where to go by car? Putting together a route of a great trip around the island. We’ll visit the mountains and picturesque bays, see ancient monasteries and forts, walk in the old streets of mountain villages.

After visiting Cyprus, I had a fix idea – a trip to Cyprus by car. It was born out of the local roads – driving on them is a pleasure: flat, clean, smooth. As if by magic! I wanted to travel around the island not on the tour bus, but by car, with stops in the most secluded corners, frequent stops and overnight stays by the sea.

Gradually there is a list of places I would like to go in Cyprus by car. It is purely subjective, here are only the places that attracted me. I have grouped them by city for convenience, and the route you make on the basis of your preferences. I would be very grateful if you could tell me in the comments about the places that impressed you, and recommend something.

On public transport is not very convenient to see the sights of the island, it is better to rent a car. We advise to book a car on a reliable service Localrent.com. We often use it when traveling. Renting a car in Cyprus costs from 30 euros per day. The only drawback is left-hand traffic, but you get used to it very quickly. Learn more about car rent in Europe.

Southern Cyprus: where to go

I associate Southern Cyprus with mosaics, ancient Greek ruins, turtles, seascapes and parched grass, as I visited it in the hottest time – in July. Nevertheless, if you go to the mountains, the landscape changes dramatically. In general, the diversity of the island reminded me of Morocco and Crimea.

Most tourists arrive in Larnaca – here we will start the itinerary of our trip to Cyprus. It would be handy to book a car in advance at Localrent.com to get it right at the airport and return it there before the flight.

I think that Larnaca is undeservedly neglected by tourists – there is a lot to see in the resort and its surroundings. The main attractions are Marina Harbor (I have a thing about ports – I guess in a past life I was a Greek sailor), the fort, the Church of St. Lazarus, the Aqueduct of Kamares, the mosque of Hala Sultan Tekke (unexpected). For dessert, the salt lake where you can watch pink flamingos in winter. 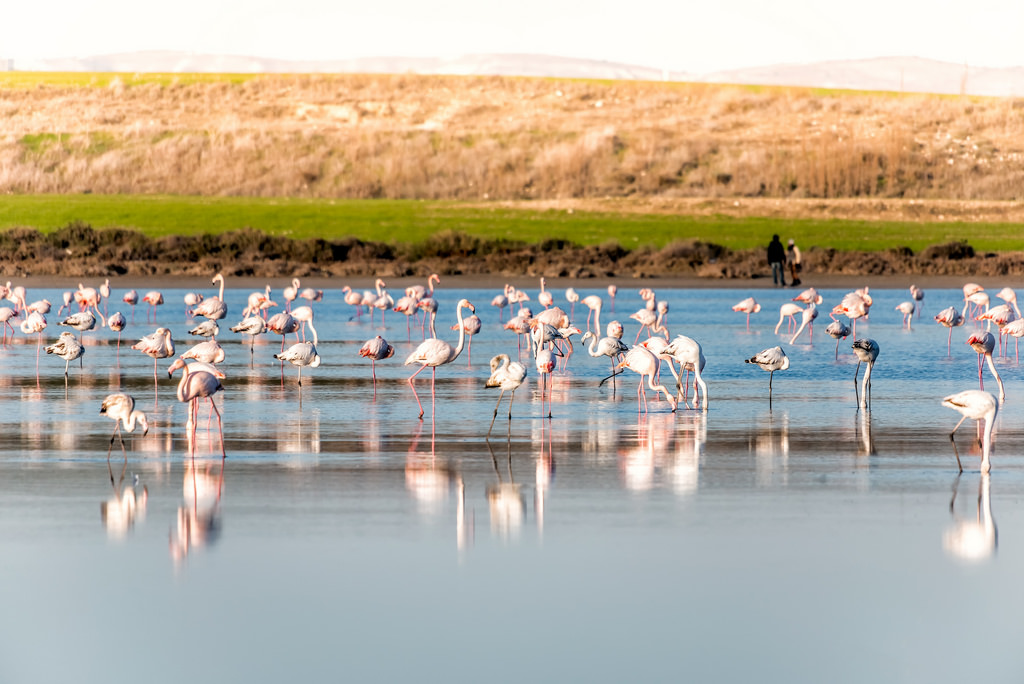 The next place I would go in Cyprus by car is Ayia Napa. For many tourists, Napa is primarily about unrestrained parties and nightclubs, but I don’t take that kind of vacation. I am primarily attracted by Cape Greco, which resembles the beloved Tarkhankut peninsula in the Crimea, and the forest park Kavo Greco – they are located between Ayia Napa and Protaras. I would also like to see the Thalassa Sea Museum, the Love Bridge, the monastery and the curious CyHerbia herbal maze park (near Avgorou village). And of course it’s a sin not to sunbathe on Napa’s famous beaches, like Nissi, Makronisos and the Blue Lagoon. Learn more about the interesting places of Ayia Napa.

Protaras is a small village with good beaches and always calm sea. There are few sights here, but in Cyprus every nook and cranny is covered with legends! What to see? The Natural Bridge of Sinners, which is said to collapse beneath the most sinful man on earth, the Blue Bay and the beach of Fig Tree, the Church of Elijah the Prophet, which is located at a height of 115 meters – there is a good view. Tourists are recommended to follow the Profitis Ilias – Konnos nature trail. In the vicinity of the resort there is an interesting village called Liopetri.

READ
Going to Polis! Tips for travel, prices and reviews. 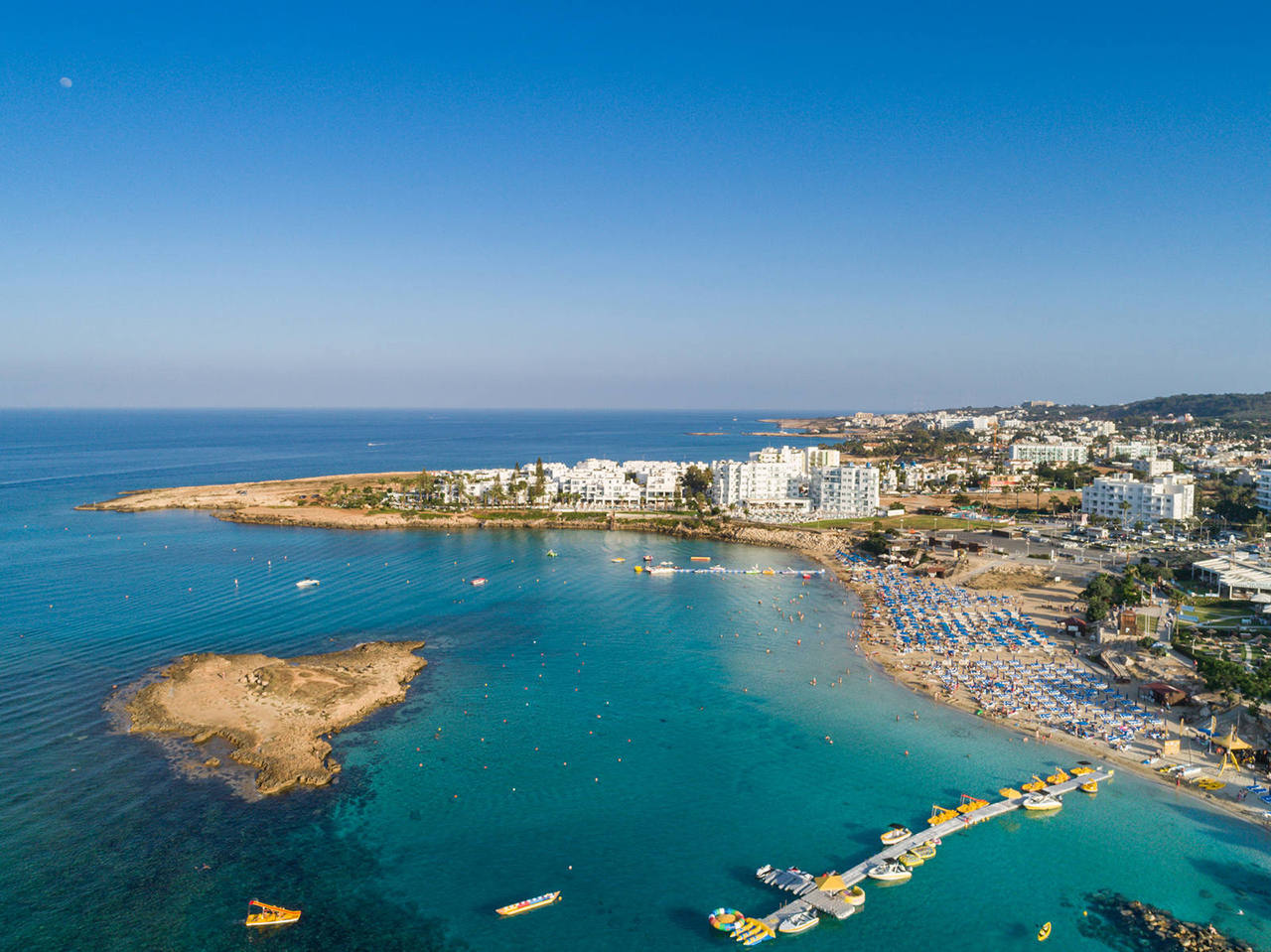 Limassol is rich in historical sites: the old town, Limassol Castle, the Temple of Apollo of Hilat, Kolossi Castle, the Cat Monastery. Where can I go from Limassol by car? I am particularly interested in the ruins of Amathus and Kourion, I love to wander through the ruins and reconstruct cities in my imagination. Very attractive are the so-called White Stones (rocks) near the monastery of St. George Alamanou. From the resort it is convenient to go to Mt. Troodos.

Where to go in Cyprus by car when the coast is scorched by the sun and it feels like your skin is melting? Head to Troodos – this mountain range with its lush vegetation and saving shade in summer attracts not only tourists but also locals. When the temperature on the coast is off the charts, the mountains remain at a comfortable temperature of around +25°C.

What to see? In Troodos you can see several UNESCO sites – churches and monasteries. The most famous is the Kikkos monastery. Here is kept the oldest miracle-working icon of the Mother of God, painted during her lifetime by the Apostle Luke. But it is not even the mountains and churches that attract me to Troodos, but the ancient streets of the mountain villages: Kakopetria, Lefkara, Fini, Omodos, Pedoulas, Moutoullas, Zigi, Fikardou. Each village is known for its craft – for example, Lefkara is famous for its lace and Omodos for its wine. 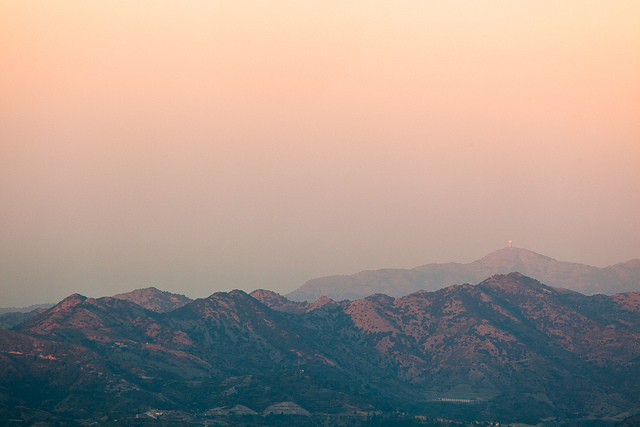 I vacationed exactly in Paphos. In my opinion it is impossible to get bored at the resort – there is a good balance of natural and historical attractions. Many of them can be reached on foot or by bus. I will not describe here, read a separate article, what to see in Paphos. 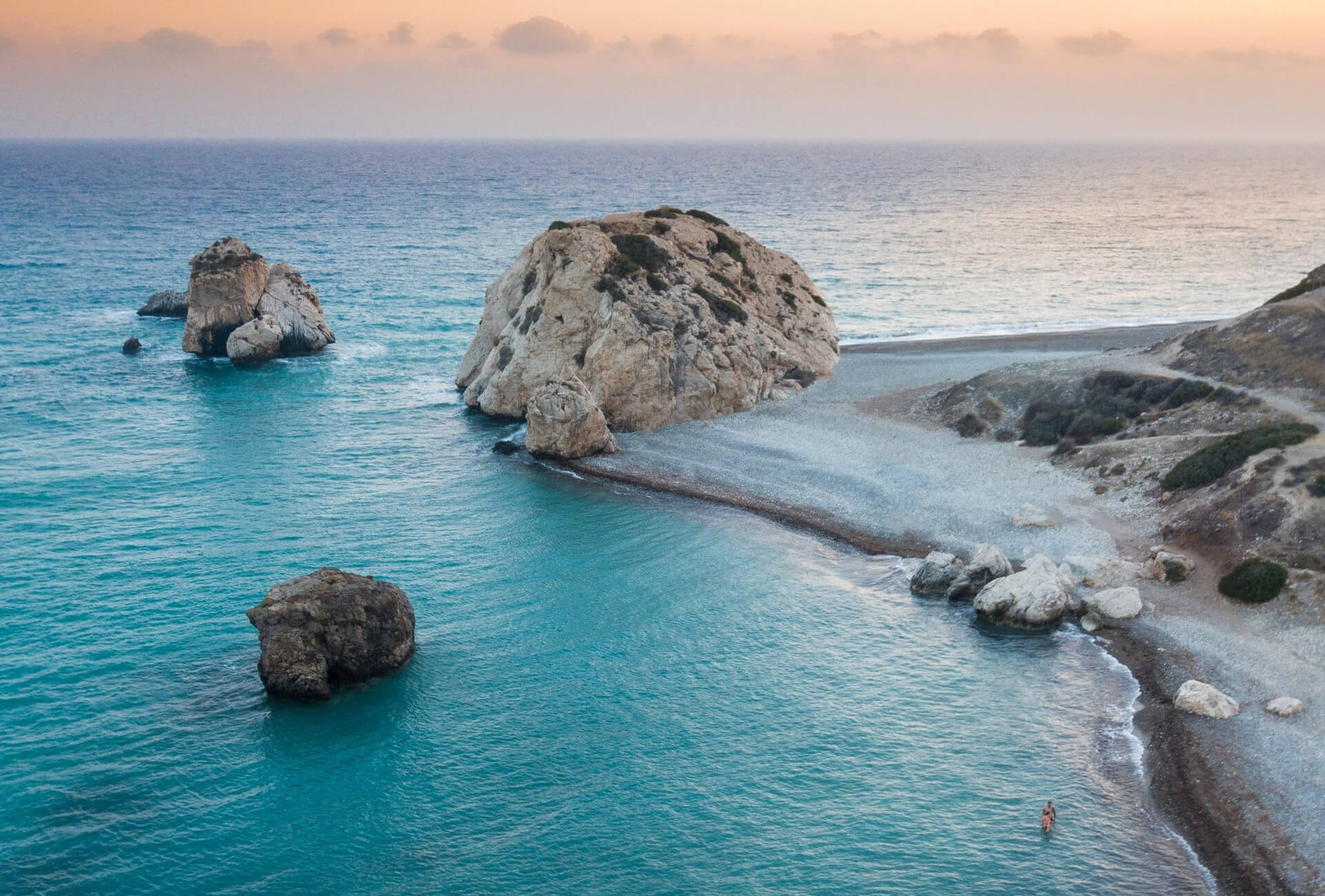 The Aphrodite Stone is located around 20 km from Paphos. Photo: unsplash.com / @diddymonaco.

Another place in Cyprus to go by car is the Akamas Peninsula, which stirs my imagination. Akamas is an almost untouched corner of Cyprus with endemic plants. The reserve is protected by UNESCO.

The peninsula is an ideal place to travel by car (preferably off-road). It is also good for hiking, here no one will prevent you to admire the impressive landscapes of Cyprus. You can walk the trail of Aphrodite, look at the green turtles in Lara Bay, which are on the verge of extinction, and visit the Avakas Gorge (is about 1 km from the reserve). 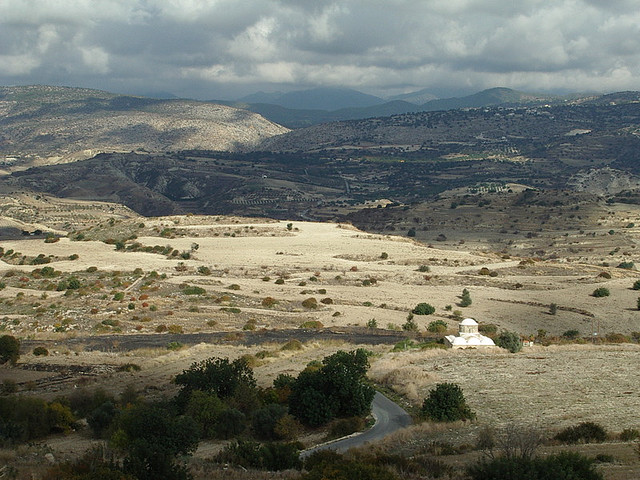 Landscapes of the Akamas Peninsula in Cyprus. Photo: mrcharly / flickr.com.

North Cyprus: Where to go by car

A trip to Cyprus by car would not be complete without a visit to Northern Cyprus – it has remained in my memory as a very special place. And it’s not just the nature, which is different from that of the South.

Behind the “green line” after 1974, when Cyprus was divided into South and North Cyprus, there are many historical monuments:

Unfortunately, now to get to the northern part of Cyprus and to appreciate its landscapes you have to cross the buffer zone. However, it is not a problem, the main thing to have a passport, driver’s license (in Latin alphabet) and a visa, on which you will be let back to Southern Cyprus (for example, the Schengen or Cyprus multivisa, but the visa is not suitable, because it is single entry). At the checkpoint you need to take out insurance.

Bellapais Abbey in North Cyprus. Photo: P Donovan / flickr.com. The border between North and South Cyprus is a buffer zone.

The Republic of Cyprus is a popular resort destination in the Mediterranean. The island hospitably receives more than two million tourists a year. It is a picturesque land of harmony and contrasts. Magnificent beaches, charming bays, turquoise sea bays, forests and mountain ranges create a fascinating natural ensemble.

Cyprus’s small territory is home to many striking architectural monuments, including Orthodox churches and monasteries, Gothic cathedrals and Byzantine churches, impregnable fortresses and luxurious palaces. Here modern cities alternate with medieval villages and ancient settlements. One of the most acceptable options for traveling to the iconic places of the island is a road tour. To implement it, tourists must decide what to see in Cyprus by car.

Advantages of renting a car 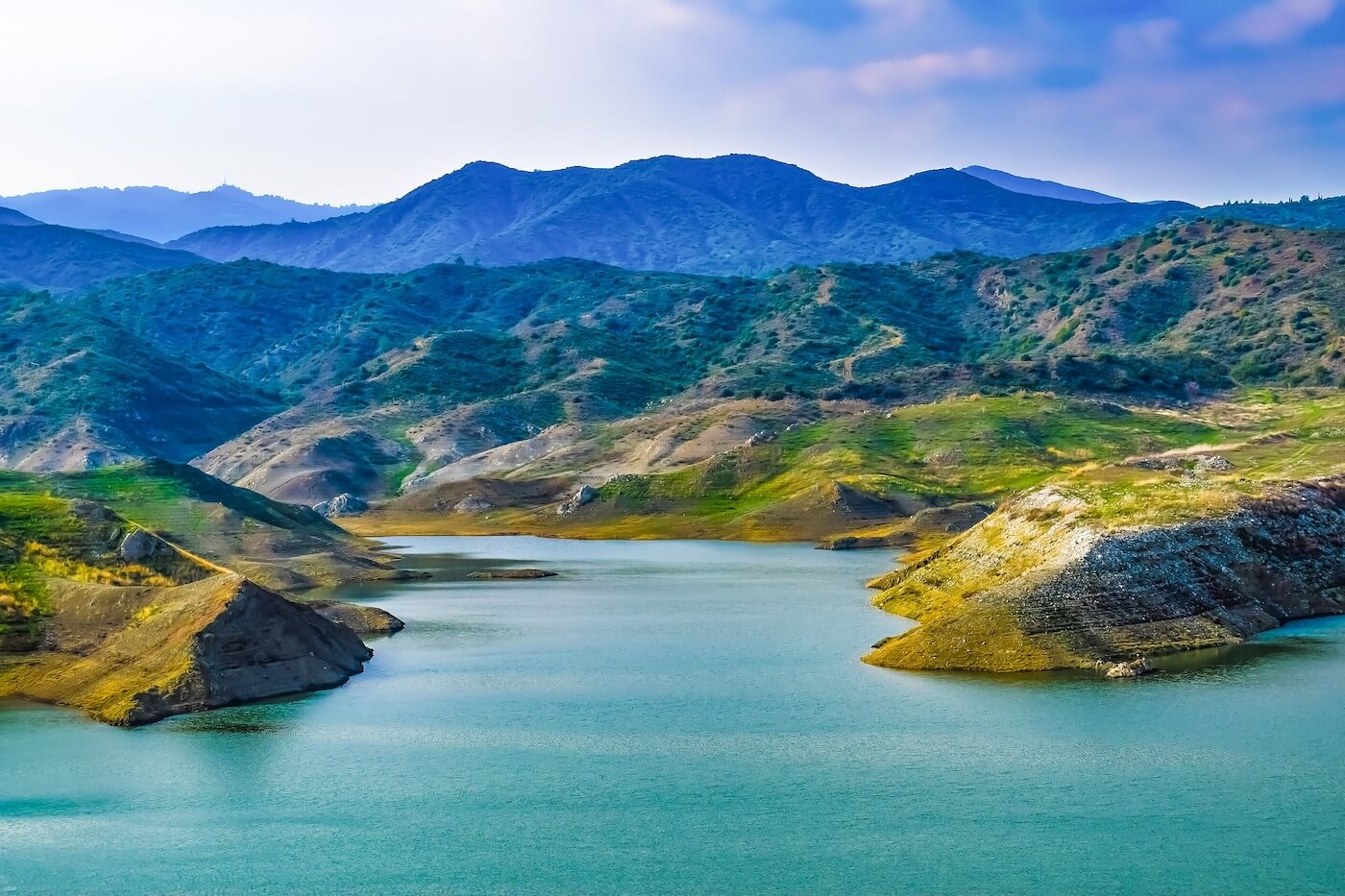 Travelling by rent a car gives tourists the opportunity to independently compose a fascinating route and plan a memorable vacation program. Among the undeniable advantages of this method of release is the following advantages: mobility, comfort, time savings and independence from the schedule of municipal transport.

The presence of “iron horse” allows travelers in a short time to get acquainted with the main sights of the Republic, to visit the popular resort towns, relax on the best beaches and visit the original mountain villages. To rent a car at a reasonable price it is recommended to use a popular service – Myrentacar.com. This aggregator site sorts out the most favorable offers of Cypriot rental companies. Customers have the opportunity to pre-book a specific car, not a class, without deposits and deductibles.

Car tourists should take into account some peculiarities of driving on the roads of Cyprus. On the island it is customary to drive on the left hand side. The driver will need to adapt to the right-hand drive. It is better to have a car with an automatic gearbox, as it would be unusual and rather unsafe to change gear with the left hand. The driver will have to adjust to the change in feel of the car dimensions.

READ
What to see in Paphos: exploring Cyprus on your own

It is important to remember that while driving (leaving the parking lot, driving in the lane, overtaking, changing lanes, etc.) the usual space, between the edge of the car and the objects on the road, is now on the left. Red license plates are installed on the rented vehicle, which guarantees the widespread loyalty of road users to autotourists. Driving around the island with the help of the navigator “Cyprus on road” will be a pleasure. It’s enough just to enter the necessary coordinates of the points and the optimal route will be constructed. 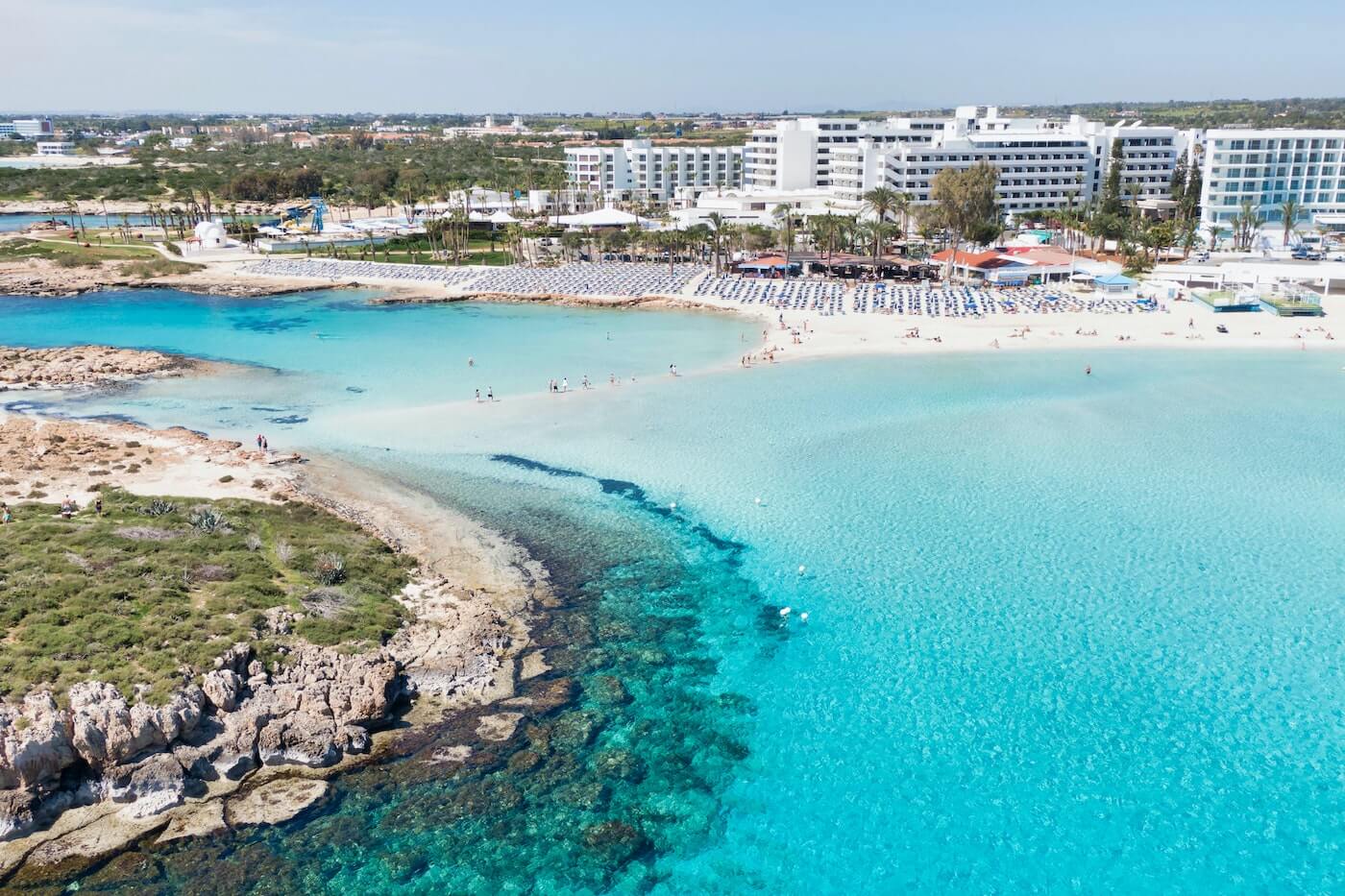 One of the pearls of the island’s coast is the town of Ayia Napa, sprawling along the shores of the turquoise sea bay. It has evolved from a quaint fishing village into a popular resort destination that is a must-see for solo travelers by car. Delightful wide white-sand beaches, an abundance of all kinds of entertainment venues and developed hotel base – all this attracts numerous holidaymakers from all over the world.

A huge number of bars, restaurants and nightclubs are ideal for fans of nightlife. We recommend touching the greatness of the centuries-old history of the city. In Ayia Napa you can see the medieval monastery of the Virgin Mary, which was built during the Venetian rule in Cyprus. On the territory of the monastery are erected ancient chapels and grow olive trees. It is impossible to pass by the monastery square where there are beautiful fountains. 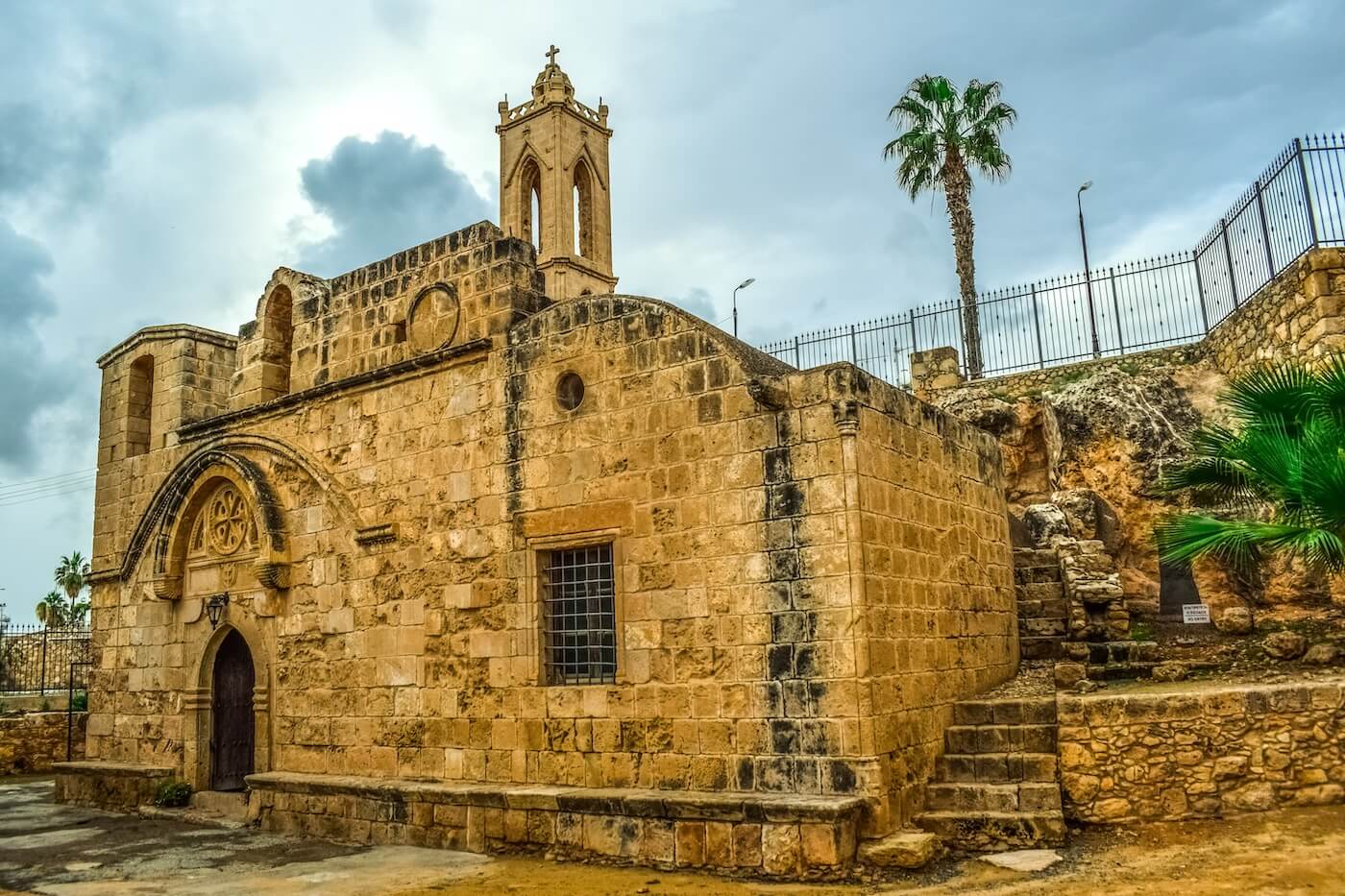 Next to the monastery there is a new temple of the Virgin Mary, where childless women come every day to pray to the miraculous icon of the Virgin Mary. Of interest are the rock tombs of Makronissos. This archaeological site consists of tombs and sanctuaries from the Greco-Roman period. The Museum of Sea Life, which exhibits reflect the richness of marine life, presents an informative program. Tourists can spend their time in the water park with water attractions, artificial caves, bridges.