Two different Guadeloupes and an extreme hike to Soufrière Volcano 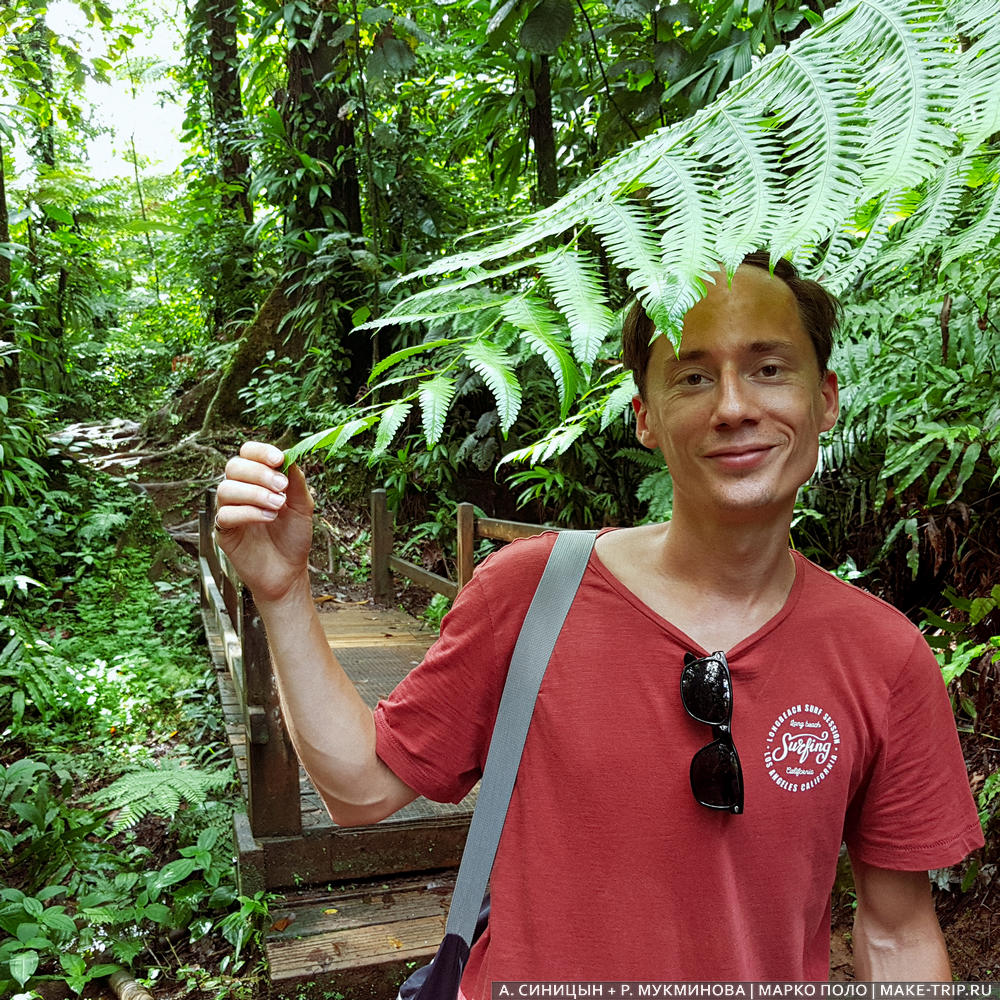 My review of our little trip around the island of Guadeloupe. We rented a car and tried to see the two main attractions in one day: the Corbett Falls and Soufrière Volcano.

Guadeloupe is shaped like a butterfly. A short isthmus connects two almost equal halves: the east is a Caribbean paradise with beaches, music and fun, while the west is mountains, jungle, waterfalls and an active volcano. To explore the country we had a car and one partial day – you can’t see everything, you have to choose. Of course, we chose the left side of the island.

It poured in Marseille, it poured in Tenerife, drizzled in Barbados, and it poured in Martinique, so that we almost didn’t manage to get out of the car all day. Arriving on Guadeloupe, we hoped for the best, but it turned out as always, or rather a hundred times worse.

That day there was only one cloud hanging over this small country, and it was firmly fixed on the volcano Soufrière we needed. Having cast a sad and sorrowful look at the Caribbean beaches on the east side of the island, we sighed bitterly and crossed our eyes and headed west, up into the mountains, into the center of the blue cloud. It wasn’t! 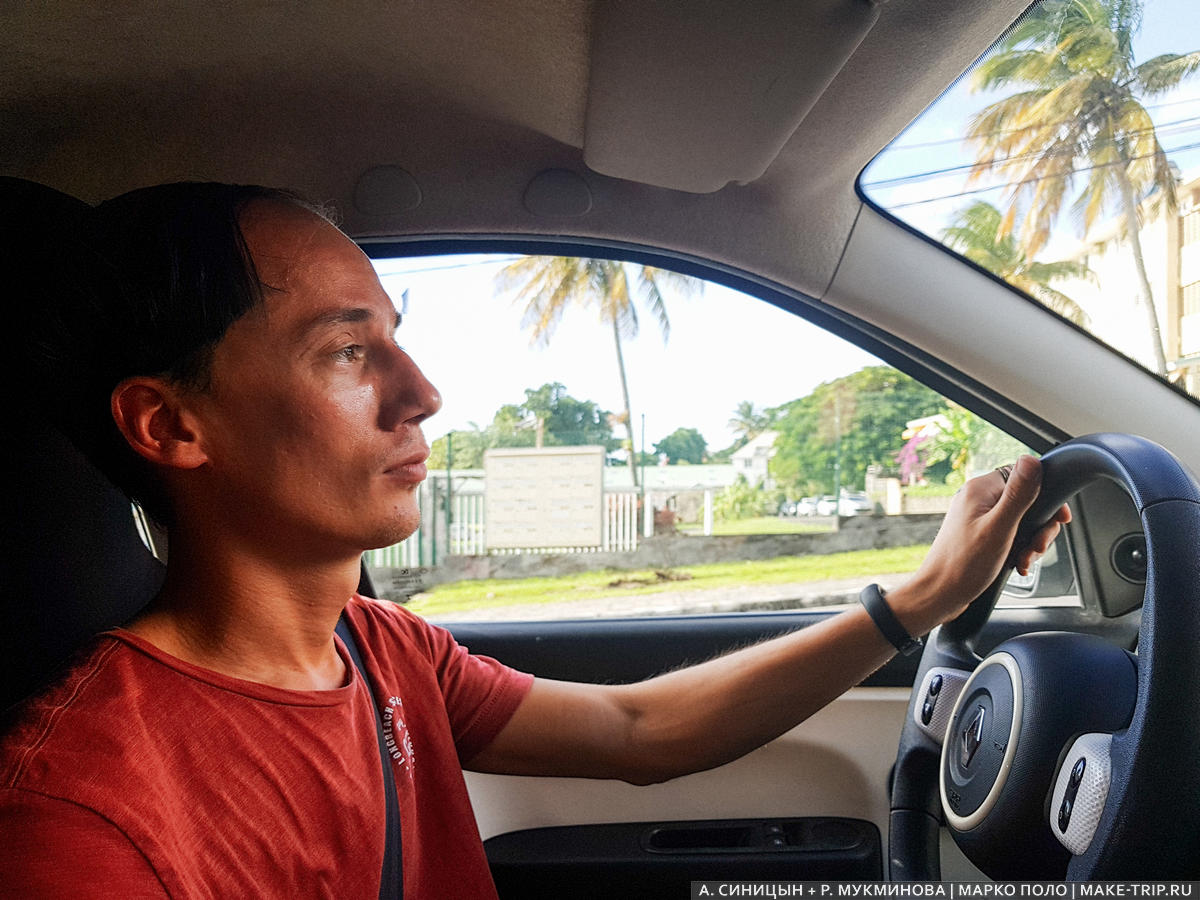 We rented a car for the day and drove into the mountains.

On the way to Soufrière Volcano, I decided to visit its other slope, known for its powerful Corbett Falls. This was a fatal mistake.

The charming road going into the heart of the jungle, to the waterfalls, was so inviting and inviting that there was no way we could have expected a set-up. I had recklessly expected to make the trek to the waterfalls and be back in less than an hour. 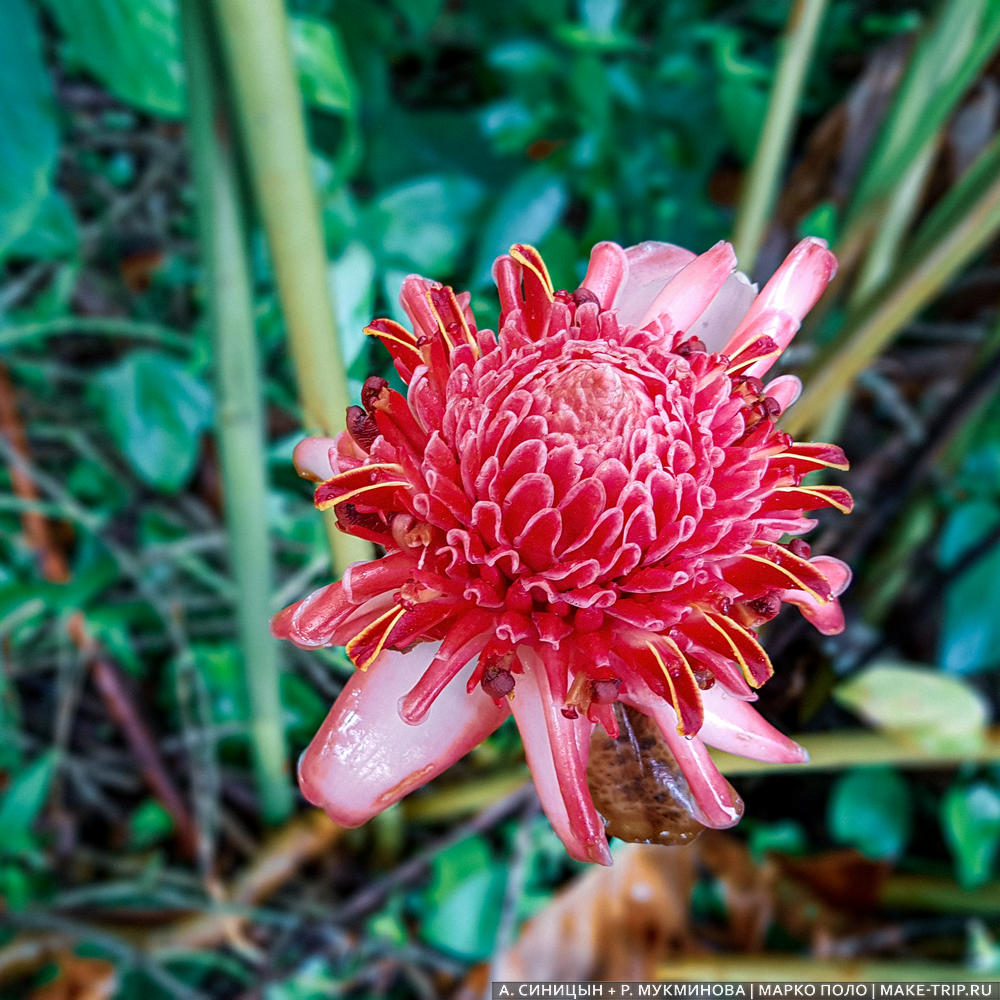 The flora in the tropics is beautiful.

It started out well – the cobblestone road promised a quick and easy route. But our joy didn’t last long – after 200 meters we hit a washed-out and rain-soaked trail, and we had to wade through it slowly and carefully – we had to jump over rocks, roots, weak bridges and rare dry islands.

There was another surprise waiting for us at the Corbett Falls, or rather two at once. To get to the observation point we had to descend 10 meters down the steep slope on a rope. After checking it out we thought it was possible and started the descent. All was going well, but then, halfway down, it came – a ferocious tropical downpour. The rain washed away not only the sweat from our faces, but also our hopes of successfully climbing the volcano before dark. More precisely, they were still there, but our confidence was shattered. Deciding to sacrifice the waterfall, we began to hastily climb up the rope and headed back before the forest was completely flooded.

Stairs. We started to go down by the rope. Alas, the photo does not convey the height and steepness of the slope. We went back to the beginning of the route.

We walked for an hour through the jungle, cleaned up for half an hour, spent the same amount of time on lunch, and drove another hour to the volcano. We arrived at the starting point of the ascent at an altitude of 900 meters only at 16:10. We quickly began the ascent, but another downpour knocked us off our feet. The rest was like in a fog. An hour and a half of ascent through the jungle, cold, fog, downpours, wind, a heady smell of sulfur gas, and the gradual but steady onset of dusk. By 5:30 p.m. we had reached an altitude of 1,340 meters, when it started raining again and the wind came down hard. We were already too late, the light was melting before our eyes, so we had to start a very hurried descent over the slippery rocks. Already in 10 minutes we saw only vague outlines of objects, and in another 20 minutes total darkness reigned. By some miracle we made it down in an hour or so, although the chances were not great. My leg fell off the cliff once, but I landed on the trail with the bulk of my body, so I got off with only a bruised palm.

A heroic girl: climbing a volcano with me in the pouring rain, in the fog, on slippery rocks. Once, for a brief moment, a window formed in the clouds and we saw the village and the sea below.

This was my fourth ascent of the volcano, and none of them was without extreme conditions: each time I had to balance on a fine line if not of life and death, then at least of health. On the other hand, every ascent is etched in my memories. It was a pity we did not make it to the crater: only 100 meters of elevation and about 700 meters in a straight line were missing.

Then: 70 km along the night road, change the car, take a cab to the port and return to the liner. At dinner in the restaurant it was totally unreal to realize that only three hours ago we were descending a volcano in total darkness through the pouring rain through the jungle, soaked with moisture, to the accompaniment of trance-inducing sounds of tropical fauna. The people at the next table were showing each other pictures of sunny beaches – we were in completely different Guadeloupes on the same day.

Soufrière is an active stratovolcano in the western part of the island of Guadeloupe, called Bas Ter (“low/low land”). A narrow strait separates this part of the island from Grande Terre (“big land”), so a larger map shows two islands, Bass Terre and Grand Terre, and Guadeloupe no longer appears as an island, but as an administrative unit of Guadeloupe within the archipelago of the Leeward (in relation to the northwesterly trade wind) Lesser Antilles in the Caribbean Sea. At the foot and on the slopes of the Soufrière grows dense tropical forests. In the southern part of the crater formed a volcanic lake Flamarion 183 m deep. The volcano and the lake are located in the 173 km2 Guadeloupe National Park, which is also a UNESCO Biosphere Reserve. Along the slopes of the volcano runs down the Grand Carbet River, descending in a cascade of three waterfalls 125, 110 and 20 m high, respectively. Near the volcano there are hot springs, because of which in pre-Columbian times the island was called Caruquera or Caloocaera (“Island of wondrous/wonderful waters”). And Columbus named it Santa Maria de Guadalupe d’Estremadura. Soufrière is not unreasonably named the “source of sulphur.” The “telling”, though not too original name justifies the active gas emission from the volcano’s vent through the fumaroles. Soufrière is shrouded not only in sulfur smoke and clouds, but also in legends of the pirates of the West Indies, who left behind a bloody memory on Guadeloupe. Locals claim that it was here, at the foot of the Soufrière volcano, that the corsairs hid their looted treasure, assuming that the mere sight of the ferocious volcano would scare off treasure hunters. The pirates miscalculated, and these days there are specialty stores on Bass Terrace selling everything treasure hunters need, from shovels to metal detectors. There are prospects for treasure hunters, although so far no one has found anything of value here. The 1976 eruption went down in history as the subject of a fierce dispute between two schools of volcanology. Soufrière Volcano is one of the most studied volcanoes in the world, with seismic stations and geophysical laboratories monitoring volcanic activity. The last eruption happened in 1976. It did not cause any casualties and was weaker than the previous ones. Nevertheless it affected the economy of the capital of Guadeloupe, the port city of Bas-ter, which is located almost at the foot of the volcano. Volcanologists knew about the possibility of an eruption in advance, but when discussing the need to evacuate a city as large as Bas-Ter, a heated debate ensued. The two schools of volcanology represented by geochemist and director of the Institute of Physics of the Earth in Paris, Claude Jean Allègre (born 1937) on the one hand, and volcanologist Haroun Taziyev (1914-1998) on the other, were the disputing parties. Both scientists had by that time a lot of merits and were of great authority. The Bas-Ter administration was at a loss, not knowing whom to listen to. The debate was public and at times very heated. Claude Allègre insisted on compulsory evacuation, while Taziyev argued that the Soufrière volcano would not cause any harm to the city. In the end, the city authorities decided to be cautious and evacuate the population of Bas-Ter. In addition, the slopes of the volcano were shaking from the explosions and panic broke out among the population. People were evacuated to Grand Terre, the eastern half of the island of Guadeloupe. In the end Haroun Tazieff was right: the eruption did not cause any damage to the city. 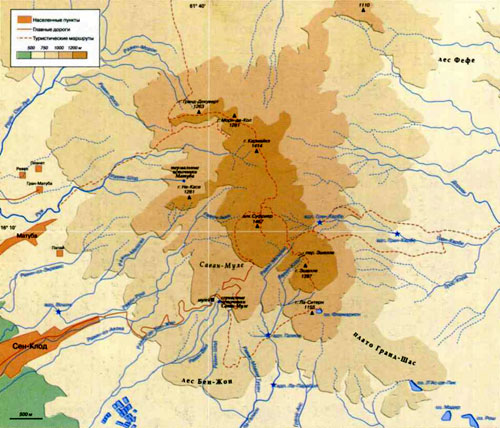 But it’s still better to be on the safe side, say the islanders. You can expect unpleasant surprises from nature. Sometimes tropical storms hit the island during the rainy season. Guadeloupe’s climate is tropical and there are few minerals. The slopes of the mountains in Bass Terre are covered with forests, and on Grand Terre the forests are already almost completely cut down. The islanders collect rainwater, which quickly escapes into crevices, in reservoirs. Food is imported mostly from France. Overseas Department of France – it’s like no longer a colony, but the lives of the natives (mostly the descendants of black slaves brought in to replace the exterminated Caribs; white, not counting tourists, less than 1%) can not be called happy: the volcano is restless nature, its eruptions damage crops and orchards. Eventually the population was forced to give up horticulture and take up the service of tourists. There is a problem of seasonal agricultural unemployment on the island. But tourists come to see the exotics all year round.

Guadeloupe 0
Guadeloupe Guadeloupe is one of France’s many overseas territories scattered across the planet. Several

South of Russia 0
Ashe: tips on vacation A small seaside village near the mouth of the river

Where to go 0
Where to go to rest in August at sea In summer, most working Russians

Tips 0
How to properly tan in the sun. How beautifully and correctly to tan on