The Yusupov family was one of the richest at the time of Tsarist Russia. Its representatives owned numerous houses in Moscow and St. Petersburg. However, the purchased property never left the hands of the family: it so happened that only boys were born into the family, to whom the wealth was passed from generation to generation. One of the houses belonging to the family was in Kharitonievsky Lane.

History of the Yusupovs and the palace in Moscow

There is a legend that on the site of the Yusupov Palace there used to be the chambers of Ivan the Terrible, where the ruler used to rest after the hunt and tortured his captives. It is said that subterranean passages sprawled out from here all over Moscow, bringing the Tsar to any point of the city.

The building was abandoned for a long time, and then, when it was rebuilt, the owners kept changing. In the XVII century Peter I granted the building to his henchman Shafirov. After him the palace passed into the hands of the real Privy Councillor Count Tolstoy, who by decree of Peter II was exiled, and the property was seized. The palace was given to Alexei Volkov, Menshikov’s assistant. Less than a year later, the latter was deprived of his post, and the estate again passed into other hands – namely, into the hands of the Yusupov family. The first owner was Grigory Yusupov-Knyazhev, who held social events here. At that time Sergei Pushkin rented accommodation in the left wing and lived here with his son Alexander Sergeyevich.

The Yusupovs owned the mansion for slightly less than two centuries, before the October Revolution. During this time the estate grew in size and was joined by the neighboring Izmailovs. By the way, the last representative of the family – Felix Yusupov – was married to Irina Romanova, so the family managed to become related to the royal family.

Like many other buildings that belonged to the wealthy nobility, after the Revolution, the palace was taken over by the Soviet authorities, and for a long time there sat the Agricultural Academy of VASHNIL.

It is probably difficult to imagine more Russian architecture than in the Yusupov Palace. Almost all rooms are painted in the traditional Russian style and remind of boyars’ terem from fairy tales. Although in fact it is even a few towers, united into a single complex with the help of corridors and passages. The walls outside are decorated with multicolored platbands, and the building is crowned with small domes with weathervane and various decorative elements.

Each room is painted differently. On the walls of the halls of the first floor you can see pictures depicting scenes from the life of Ivan the Terrible. Most of them are devoted to hunting, as the palace used to be the tsar’s hunting lodge. The palace also has a large throne room where solemn receptions were held, a portrait room, and an armorial room. All in all, ten halls were open to the public and distributed over three floors. A fragment of the old masonry of the building, which had survived since the time of Ivan the Terrible, was left for public viewing in the halls.

In 1917, after the Revolution, Felix Yusupov and his relatives were able to flee to Europe. As it was believed at the time, all of the family’s wealth had been nationalized. However, it later turned out that before he left, Felix had managed to hide some of the precious jewelry, gold and silverware, as well as a Stradivarius violin in the palace. All of these objects were found in a hiding place; they were wrapped in old and decrepit clothing.

As of 2019, the palace is undergoing another restoration, so the museum is closed. There is no reported date for its opening; it’s worth keeping an eye on the official website for updates.

Before the restoration began, the museum was accessible on Sunday, Monday and Tuesday from 10:00 to 19:00. It held themed events and tours for children and adults. Employees of the museum told the visitors about the history of the Yusupov family and the building, the legends associated with its construction. In the courtyard in the warmer months there were performances and interactive performances for children. It is expected that after the opening of the palace all these traditions will be preserved.

Where is it located and how to get there 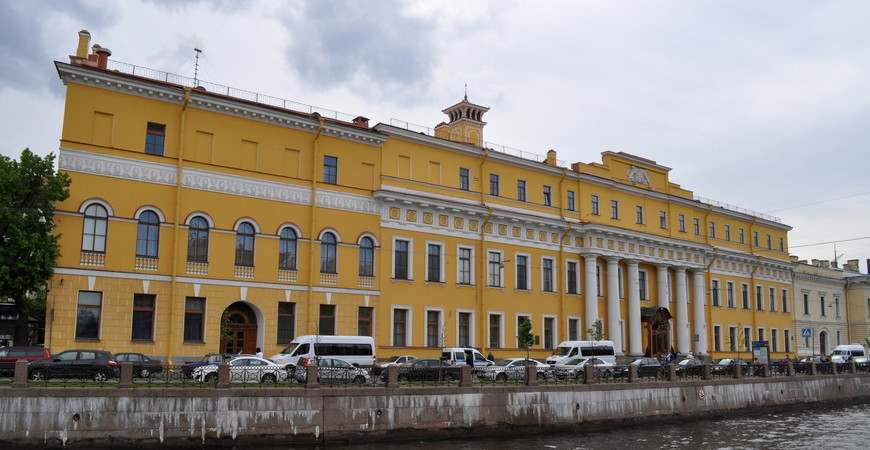 Yusupovsky Palace in St. Petersburg is a historical and cultural monument of federal significance. A unique architectural ensemble of the XVIII-XX centuries and the former residence of Princes Yusupov, which went down in history as the place where Grigory Rasputin was killed. Nowadays it is a cultural center, where guided tours, exhibitions, concerts and other educational activities take place.

History of the Yusupov Palace in St. Petersburg

Originally, the site of the residence was a small palace and a wooden manor of Princess Praskovia Ivanovna, niece of Peter I. Since 1726, the estate has had several owners, and in 1830 was purchased by Prince Boris Nikolayevich Yusupov.

The construction of the residence lasted for almost two centuries. Until 1916 several generations of the noble family Yusupov repeatedly rebuilt and reconstructed the palace. Several Russian and foreign architects worked on the interiors of the halls, including the famous Italian masters Antonio Vigi and Bernabo de Medici.

On December 17th 1916, Grigory Rasputin, the spiritual adviser and friend of the family of Emperor Nicholas II, was murdered in the Yusupov Palace. Prince Felix Yusupov was exiled to the estate “Rakitnoye” for his participation in the conspiracy, and the palace was given to trustees and turned into a German consulate.

In 1925, after the building was given to the pedagogical intelligentsia of the city, the Palace of Culture of Education Workers was placed there, which later turned into a historical and cultural center, which exists to this day.

During the Great Patriotic War in the halls of the Yusupov Palace in St. Petersburg was placed evacuation hospital. The foundations, walls and interiors of the building were badly damaged by bombing and shelling. Global reconstruction of the palace began in 1943, under the direction of Irina Benois.

Cash desks are open on days of the palace from 09:30 to 18:00 (ticket office and admission for individual tourists is from Dekabristov Street, 21).

If you are planning to go on a tour, you must come in advance, as the sale of tickets ends 10 minutes before the event.

Also pay attention to technical breaks in the work of the ticket office:

For individual visitors and small groups the entrance to Yusupovsky Palace is from Dekabristov Street, 21. For visitors of organized groups and guests of the House Theatre the entrance is from the Moika River Embankment, 94 .

When visiting the palace you can visit the Yusupovsky Park (entrance from 21 Dekabristov St.) free of charge. Opening hours from 9.00 to 21.00 daily.

The Stable Wing is open during exhibitions, except Thursdays, from 11:00 to 19:00. Divine services in the Church of the Intercession of the Blessed Virgin Mary are currently not held.

Interior of the Yusupov Palace in St. Petersburg: Google panorama

Ticket prices for Yusupov Palace in St. Petersburg in 2022

The Yusupov dynasty had an excellent picture gallery, some of which can be seen in the expositions of the palace. Also of interest are the preserved luxurious interiors of the halls and the House Theater.

You can buy a ticket to the palace on the day of the visit or on the official website of the Yusupov Palace.

During your visit you can order a tour or use the audioguide, which is available in 8 languages. For the audio guide is necessary to pay a deposit of 1000 rubles for one device. The tour lasts for 1 hour and 15 minutes.

You can also use a mobile app “Yusupov Palace” (iOS, Android) and after buying a ticket download the tour to your smartphone.

Please note that visitors in wheelchairs or with baby carriages cannot attend the “Rasputin’s Assassination” tour due to the narrow corridor. For the same reason, access to the parterre of the Yusupovsky Palace Home Theater is restricted; events are only available for viewing from the tier.

Pre-school children (under 7 years) are admitted free of charge to the guided tours (thematic/reviewing/audio guide), and must be accompanied by an adult.

Preferential tickets may be purchased only in the ticket office of the palace, upon presentation of documents confirming the right to a privilege.