How to get from the airport to downtown Athens 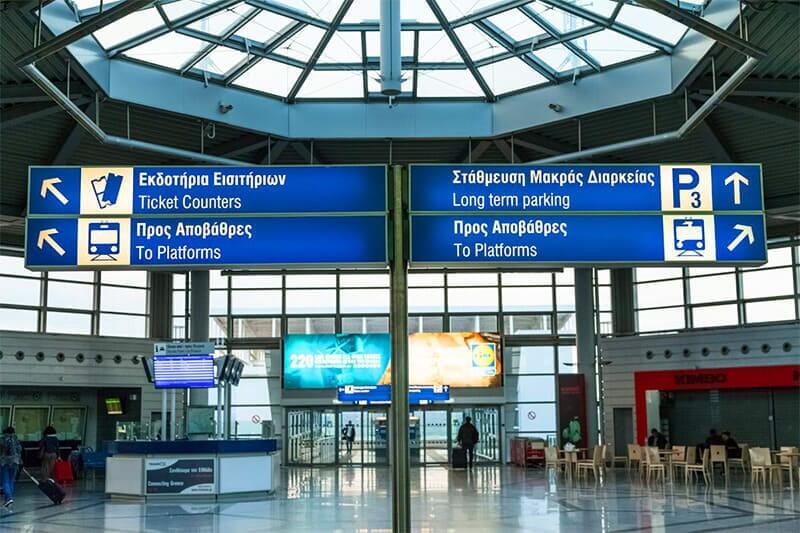 When you arrive to Athens, the capital of sunny and hospitable Greece you reach the airport first. Therefore, you need to know how to get from this airport to the city center for sightseeing.

Getting to the city center from Athens airport is not difficult at all, and in this article we will look with you at 4 ways to do it most conveniently. 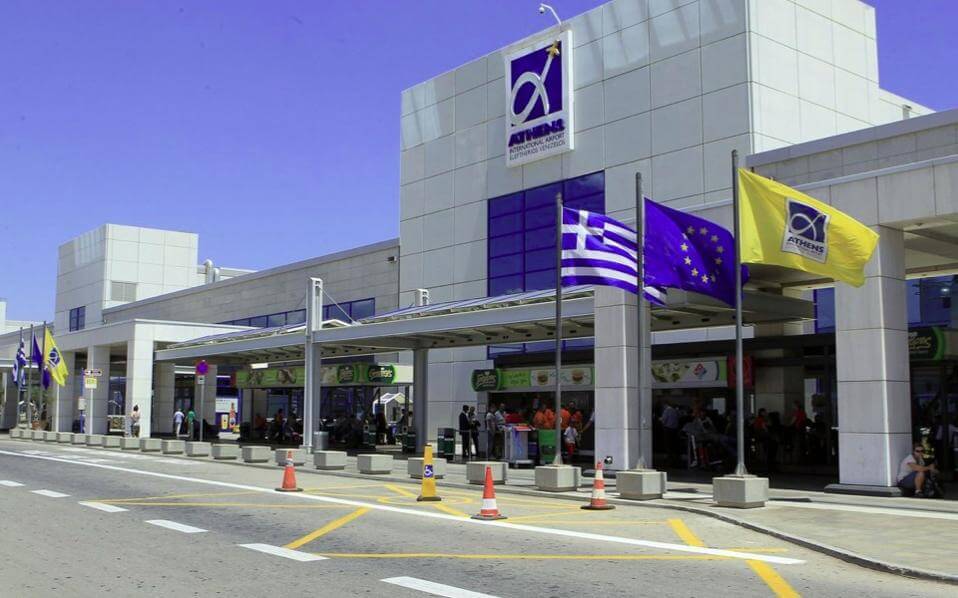 Athens International Airport is the largest and most popular airport in Greece. It is named after the famous political figure of the 20th century and the founder of the Greek Civil Aviation Service, Eleftherios Kyriakou Venizelos.

The airport has two terminals and two runways. The first floor of the terminal is used for Arrivals and the second floor for Departures. 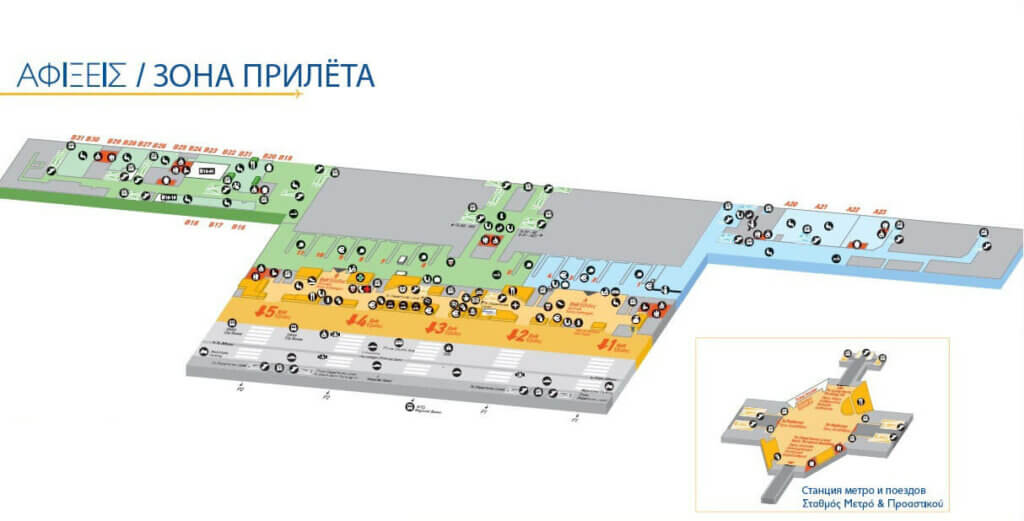 Athens Airport is located 17 kilometers from the center of the Greek capital.

The Athens Airport can be reached by metro, train, express bus, cab or by transfer. 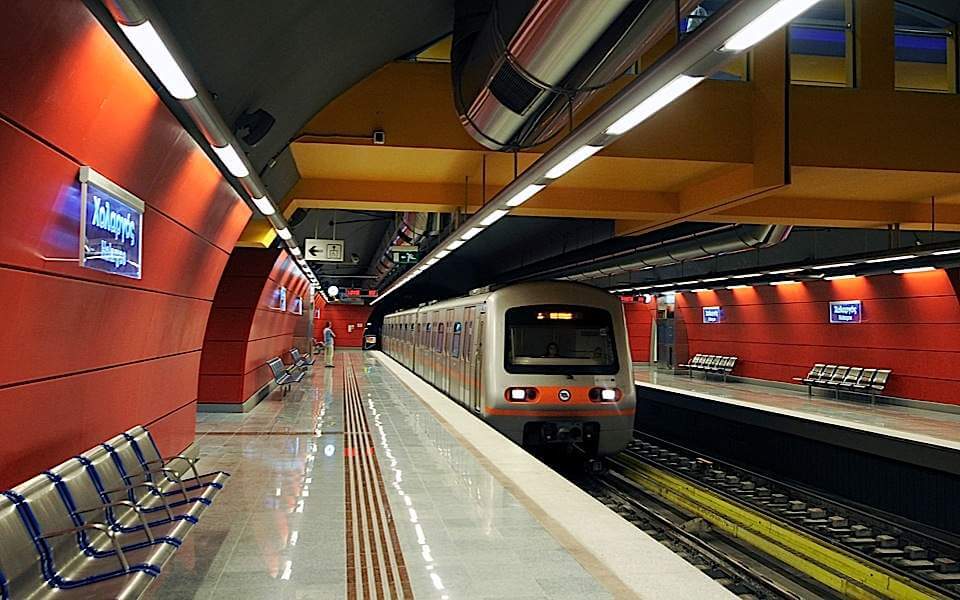 The easiest and most convenient way to get to the center of Athens is by metro. That’s because the M3 Αγία Μαρίνα blue metro line reaches the airport.

To get to the Aerodromio metro station (Αεροδρόμιο), you need to get off at exit number 2 of the Arrivals hall, cross the road, and follow the signs “TO TRAINS” (to the trains).

To the center of Athens you have to go to Syntagma (Σύνταγμα) or Monastiraki (Μοναστηράκι) stations without changing trains. The travel time to these stations is about 50 minutes.

For more detailed timetables for departures of metro trains from Athens airport to downtown and back you can check on the official metro website.

A metro ticket to Athens Airport is different from a ticket to other destinations and costs considerably more.

READ
Visa to Greece for Russians - 2022. How not to get rejected

It is also possible to buy a round-trip ticket valid for 48 hours for 18 euros.

For children from 7 to 18 years old a one-way ticket costs 5 euros.

Up-to-date information about the cost of metro tickets can be found here.

Tickets can be purchased at metro ticket offices or special vending machines. 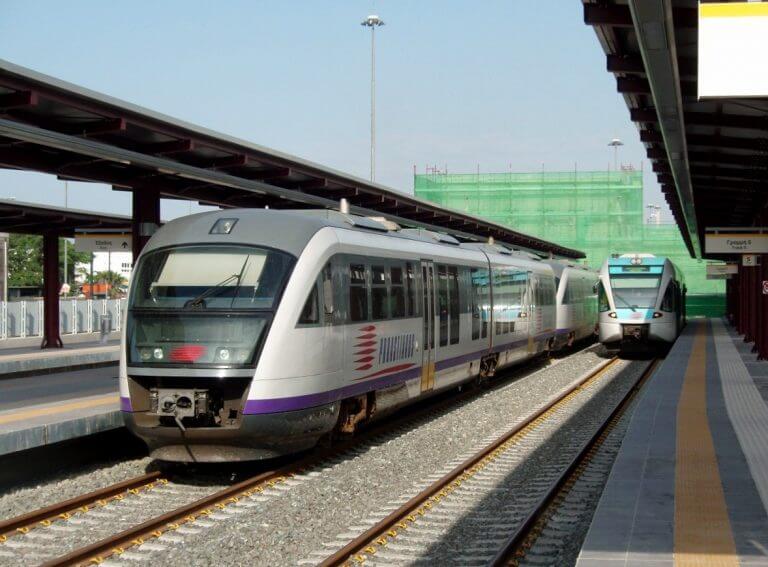 Another way to get from Athens airport to the center of the city is by taking the Proastiakos commuter train, marked P2 on the maps.

The Athens airport is as easy to reach as the metro station, since the two stations are on the same platform.

From the airport the train goes to Athens central station – Larissis Station, where you can transfer to the metro line 1.

The interval between trains is about 15 minutes. The trip time from the airport to the central station is 40 minutes.

The electric train schedule from Athens airport can be seen or downloaded here.

The timetable from Athens to the airport can be seen or downloaded here.

The ticket for the electric train from the center of Athens to Eleftherios Venizelos Airport costs 10 euros per one way.

More information about the suburban train service can be found on the official website of the company-carrier. 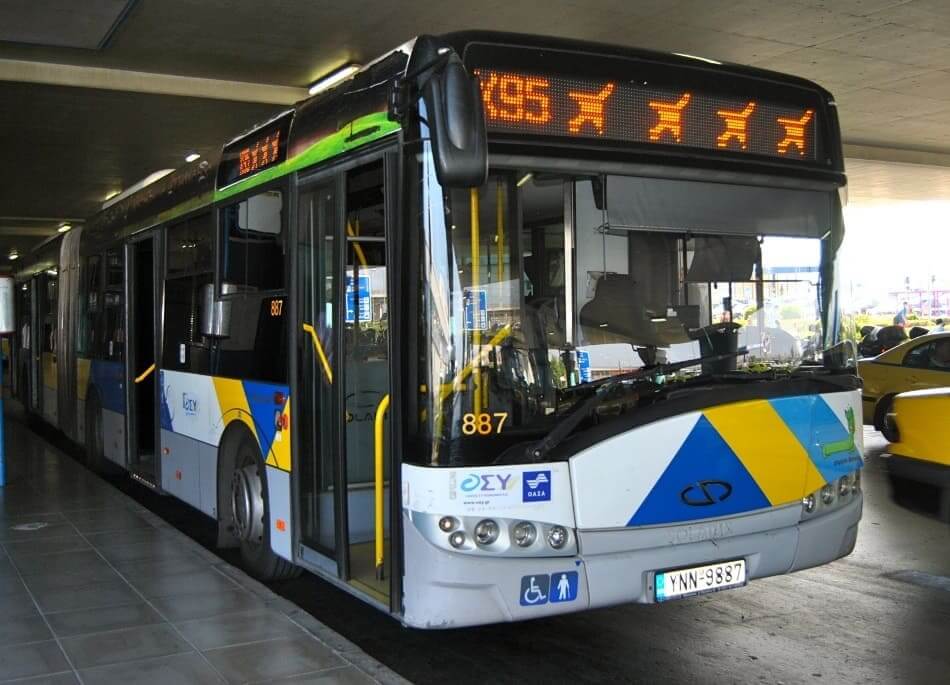 Special express buses from Athens Airport are operated by Bus Services (OSY) to different parts of the city.

The X95 runs to Syntagma Square in downtown Athens, the X96 runs to Piraeus Port, the X93 runs to Kifisia, Athens’ northern suburb, to the Kifisos Intercity Bus Station and the X97 runs to Dafni, the southern part of the capital, to Line 2 metro station Ellinico.

READ
Crete is heaven! Reviews and Tips for your Crete Holiday 2022

The stops of these buses are located on the Arrivals floor between gates 4 and 5 of the terminal building.

The X95 bus runs 24 hours a day, with intervals of approximately every 30 minutes depending on the time of day.

Travel time is about 60 minutes.

Detailed bus schedule can be found on the official website of the bus transport company.

Tickets for the bus cost 6 euros, for children from 7 to 18 years – 3 euros. Tickets can be purchased from the driver, and in special kiosks located at bus stops and at metro ticket offices.

If you want to have a more comfortable trip from Athens Airport to the center of the city you will need to book a transfer or take a cab.

It is also a great option for those traveling in large groups or with children who need to get downtown Athens more quickly and for those arriving at the airport at night. 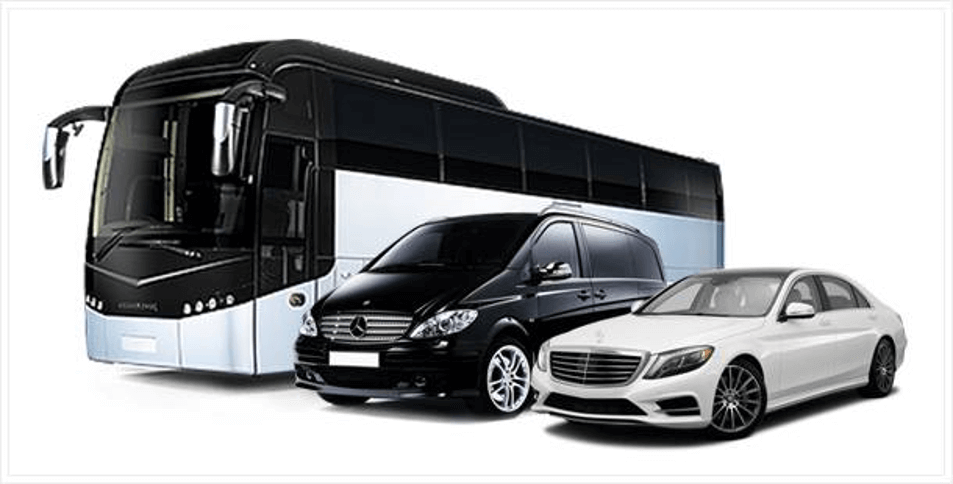 There are many companies that offer this service, such as the international company Intui.travel.

This company offers more than 6,000,000 transfer routes in 156 countries. However, the base of Intui.travel covers not only popular destinations, but also those which are simply not on the lists of other companies.

A great advantage of the company is that in many areas, in addition to individual transfer in cars from economy class to limousines, shuttle-basses are offered at a fraction of the cost of an individual transfer, or a cab ride. Shuttle-bass transfer can be booked to any hotel or other necessary location, and such a trip can be called economical.

In addition, the driver of the ordered shuttle will certainly meet you at the airport with a sign, and this service is already included in the price of the order.

On the Intui.travel website you can search for transfer routes by the name of the hotel or villa, or their address. In addition, you can book a transfer to any address, simply by indicating the destination on the map.

Another quick and comfortable way to get from Eleftherios Venizelos airport to Athens, the capital of Greece, is by cab.

READ
Holidays in Crete with children - 2022. Top Hotels and Resorts 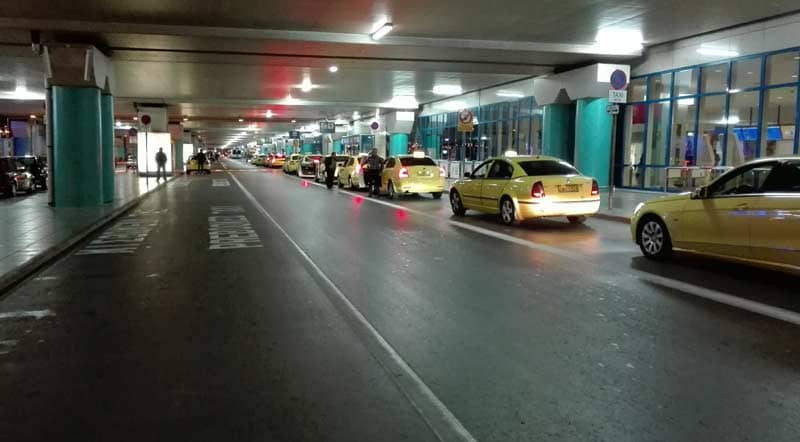 In case your trip in Greece is not limited to the sightseeing of Athens, the best solution is to rent a car.

At the airport of Athens there are a large number of car rental offices. True, renting a car on the spot, especially during high season, will cost significantly more.

To avoid this and choose the most suitable car for your trip at the best price, you should book a car in advance.

The world’s leading online car booking service Rentalcars.com will help you in this, and you can check the prices on their website right now.

Find the best price for your hotel in Athens

Selected a hotel on Booking? Compare the price of this hotel on over 50 leading booking sites and services and find the best and best deal!

How to get from the airport to Athens

I have been living in Athens for 2 years now. During this time I have visited Athens International Airport hundreds of times. For me, going from the airport to the city is a matter of course. But I thought it wouldn’t hurt to write a little guide for you.

How do I get from the airport to downtown Athens?

If you’re not going to stay in one of the hotels at Athens airport, there are 3 basic ways to get to the city center or to the port:

And a couple of alternatives:

Next, I’ll talk about the pros and cons of each way, and explain how to take advantage of them.

Cab in Athens from the airport 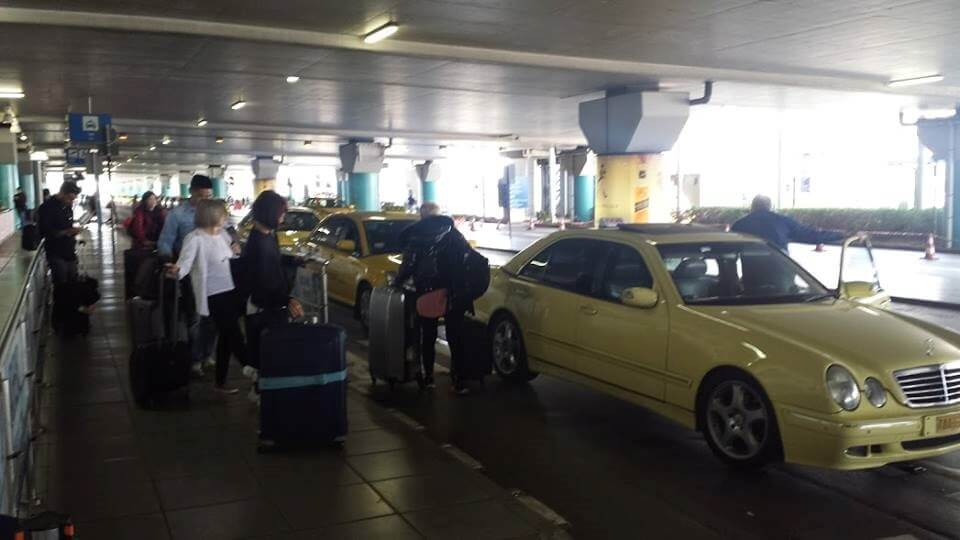 Catching a cab at the airport is the easiest, most convenient, and fastest way to get to the city center. You can arrange your belongings comfortably, and the driver will take you straight to your hotel.

Catching a cab from Athens International Airport is easy. Follow the signs or just step outside the arrival area. You will see a long row of yellow cabs. Walk to the right and then join the line of tourists waiting for the next available cab.

It will take you 35 minutes to get from Athens airport to the city center. The fare is fixed at 38 euros before midnight and 54 euros at night. There are yellow and black cabs near Athens airport. Black cars are private and usually cost twice as much as yellow cabs. Be careful.

Not all cab drivers speak English, so ask them beforehand if they know where your hotel is.

If you came in a large group, and you don’t want all this trouble with prices and cards – book a transfer in advance. 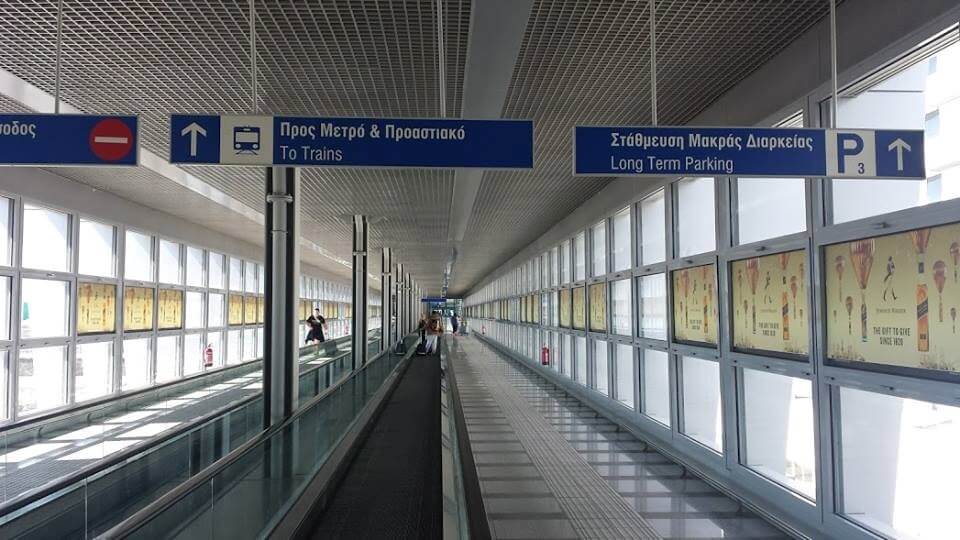 If you come to Athens for the first time and have never used the local subway, I don’t recommend it. It’s clean, modern and covers the whole city, but it’s easy to get confused.

If you are determined to use the subway, follow the signs leading from the arrival area, which have an electric train drawn on them and say “To trains”. Following the signs, you will cross the road, climb the stairs, and then walk across the bridge over the road network and the subway station. It will take about 5 or 10 minutes the whole way. My advice, when you get to the station, buy a ticket at the ticket counter (Ticket counters) and then ask which platform to get off on. 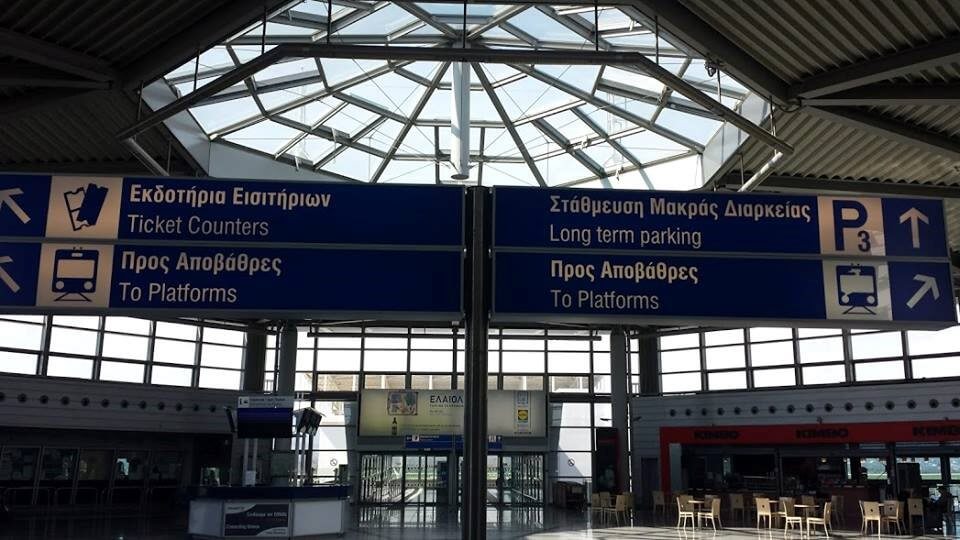 Below is a map of the Athens metro. It is in English, and I see no point in the Russian version as station names are written everywhere in Greek and English. You will take the blue line #3, get off either at Syntagma Square in the center of Athens or at the next station Monastiraki.

READ
Heraklion Airport: How to get to the city center

You can also use the subway to get to the port of Piraeus. You will need to get off at Monastiraki station and change to green line 1 and then go to the end station. 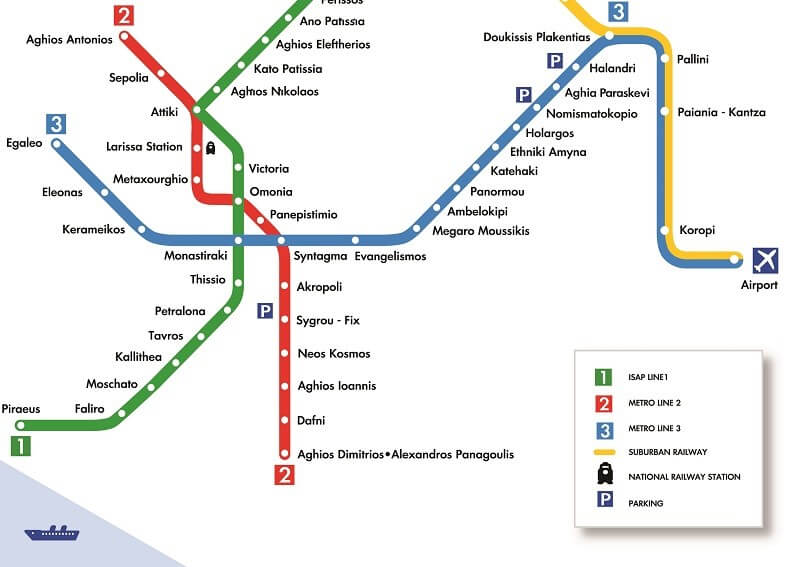 Bus is the cheapest way to get to the center of Athens from the airport. Only 6 euros per person. There are 4 different routes.

The most popular is X95. It goes from the airport to Syntagma Square (the center of Athens).

The route X96 goes to the port of Piraeus. It’s good if you are flying through Athens and want to get to one of the Greek islands by ferry.

The other 2 routes are less popular. The X93 goes from the airport to Kifisou Avenue and the X97 to Elliniko.

I’ve mostly always taken a bus from the airport. Especially since the X95 runs 24 hours a day. 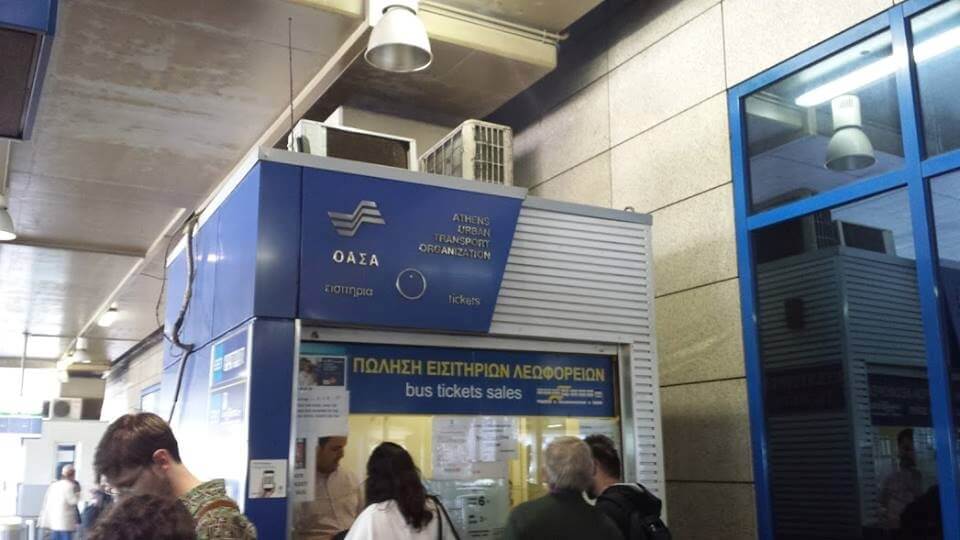 How to get to the bus stop and buy a ticket

When you exit Athens airport – turn right. Follow the sidewalk straight ahead and you will see a small blue ticket office. You can buy tickets here. After buying, continue walking in the same direction and look for the X95 sign.

When the bus pulls up, don’t wait for the well-behaved lines, but try to get your seat as quickly as possible. Once you have secured a seat, you can confirm your ticket at the ticket booth in the center of the bus. If you don’t hurry, you’ll have to stand all the way. And that’s 45 to 90 minutes, depending on the amount of traffic on the roads.

Buses go every 10 to 60 minutes depending on the route. You will be very comfortable if you stay at the hotel at Syntagma Square.