Beaches in Samaná are scattered along its coastline – on the south, which overlooks the Gulf of Samaná, and the north and east, washed by the Atlantic Ocean. So the answer to the question of which beach to choose in Samaná depends on whether you want to swim in the waters of the bay or if you prefer the ocean waves.

Playa Bonita is located on the outskirts of the city of Las Terrenas. Its length reaches 13 kilometers. This is one of the most popular beaches in Samaná, and its proximity to the hotels and villas of Las Terrenas makes it the most convenient for tourists staying in this part of the peninsula.

This white sand beach, separated from the shore by thickets of palm trees, is divided into two parts. In the western part the water is extremely calm, there are no high waves, and you can swim with complete comfort. The eastern part of Bonita Beach has frequent high waves and is therefore appreciated by fans of surfing and other water sports. The official address of Bonita Beach is José Francisco Peña Gómez, Las Terrenas 32000. 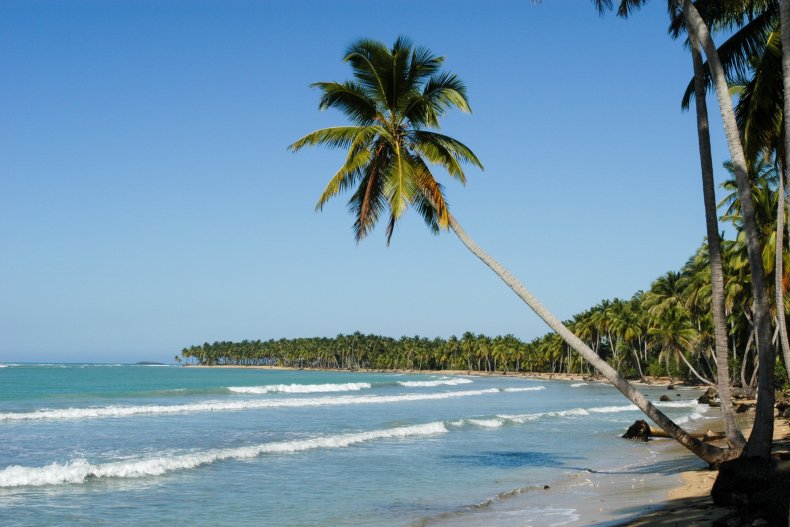 Playa Colorado is located in the eastern part of the coast of Samana and is one of the wild beaches of the peninsula. Part of it is occupied by the private sector, the rest of the space is open to tourists. You will not find any infrastructure here, but you can watch the turtles that live on the beach in abundance. The official address of the Colorado Beach is Carretera a Playa Colorado, 32000. 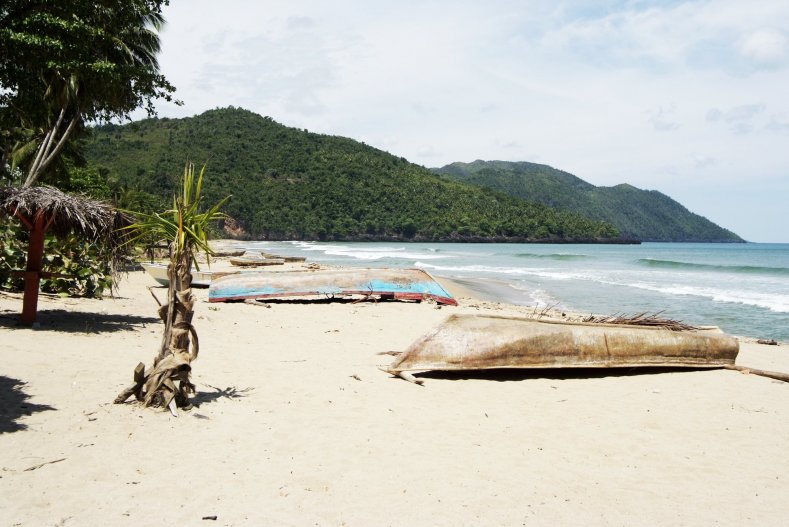 Playa Rincón is located next door to Colorado Beach. This 1.2 km long beach was named one of the most beautiful beaches in the world by Conde Nast Travel magazine. It overlooks a picturesque cove on one side and a freshwater creek on the other, beyond which begins one of Samana’s national parks. There are several restaurants and cafes along this amazingly beautiful beach, surrounded by coconut palms and mountain slopes. Here you can sample local seafood right after your swim. The official address of Rincón beach is Playa Rincón, Samana.

Cosón Playa is named among the best beaches in Samana around Las Terrenas. Here you will find not only white sand and calm azure waves, but also a good infrastructure, because nearby there are hotels and restaurants of Las Terrenas. You can also watch the mating games of humpback whales from here. 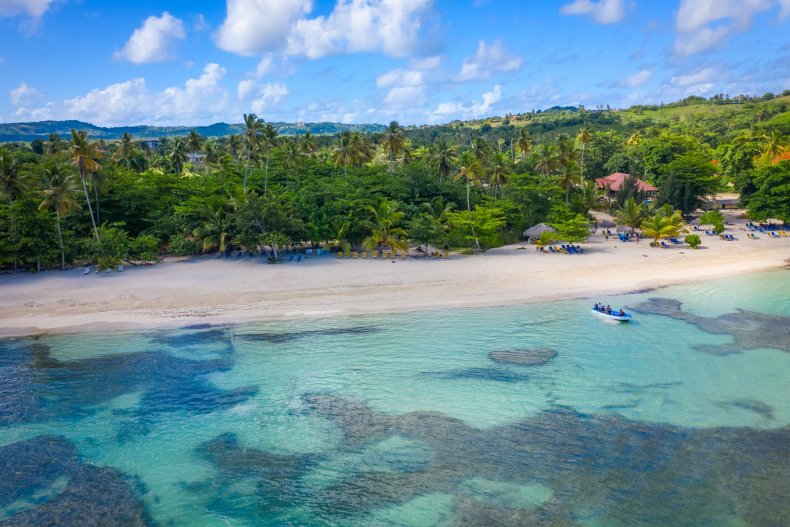 Playa Las Terrenas combines all the other beaches in the vicinity of the town of the same name. It can be called the center of tourist life in this part of Samana. The official address of Las Terrenas Beach is 27 de Febrero, Las Terrenas 32000.

Playa Las Galeras and other beaches in the vicinity of the village of the same name are ideal for lovers of quiet and secluded holidays. Here you can not only be in peace and solitude, but also swim in the waves of the Atlantic Ocean. The official address of Las Galeras Beach is Calle de la Playa, Las Galeras 32000.

READ
Dominican Republic: on your own or by tour - how much cheaper? 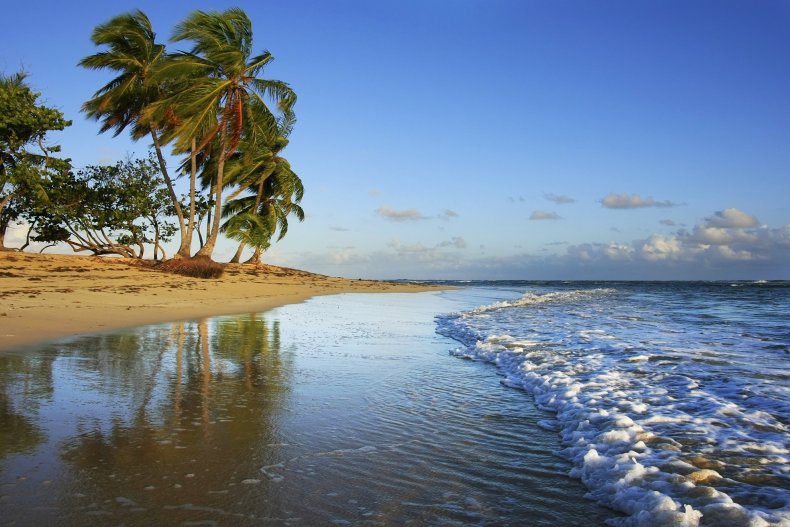 Playa Madama, which is also located on the outskirts of Las Galeras, is even more secluded. The reason for this is its location in the national park of Cabo Samana. You can only get there by horse or donkey. The official address of Playa Madama is Playa Madama, 32000.

Playa El Valle, located in a picturesque cove in the north of Samana, is ideal not only for swimming but also for fishing. If you do not want to go fishing yourself, you can always enjoy it in the coastal restaurants and cafes of El Valle. The official address of El Valle beach is El Valle-Rincon Trail, 32000. 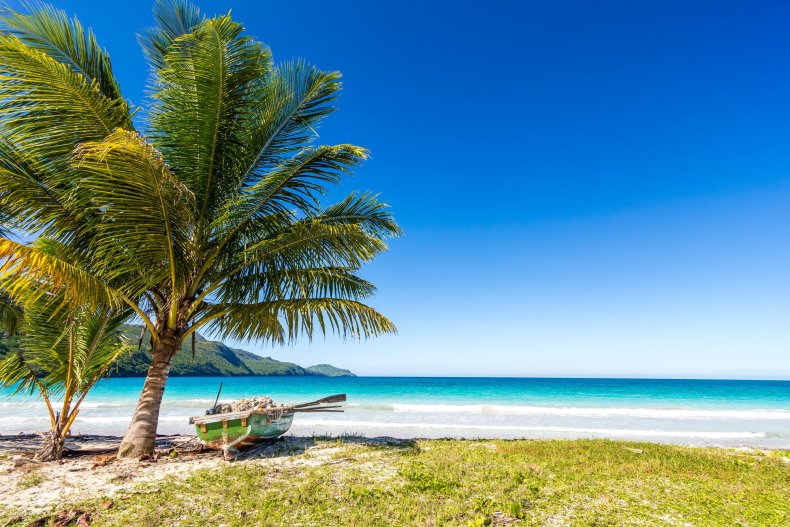 Playa El Portillo is also close to Las Terrenas, near the small local airline airport. Fans of all kinds of water sports, from sailing to surfing, will find themselves at this beach. You can rent a quad bike on the beach or sign up for an eco expedition to explore the nature of the peninsula. The official address of the beach of El Portillo is 27 de Febrero, Las Terrenas 32000.

The Samaná Peninsula in the Dominican Republic today, one of the wildest and most untouched places by man and at the same time, the most actively developing resort in the country. In my personal ranking, it is Samana that is on the number 1 list. It has:

From this article you will get a general idea of the place. And already full information about hotels, types of holidays in Saman, read the articles on the links, which will be here.

Resources to help the traveler 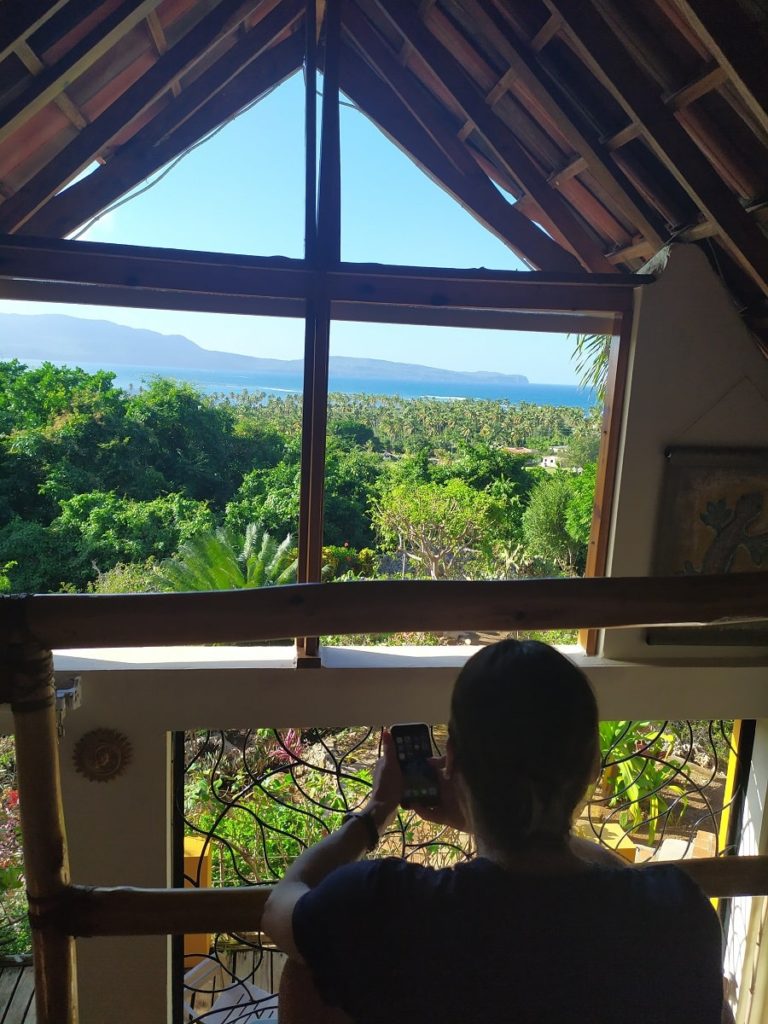 View from our eco-villa on the Atlantic Ocean and the jungle. Information about it will be below.

The most popular time for tourists to visit Samana: January-March. 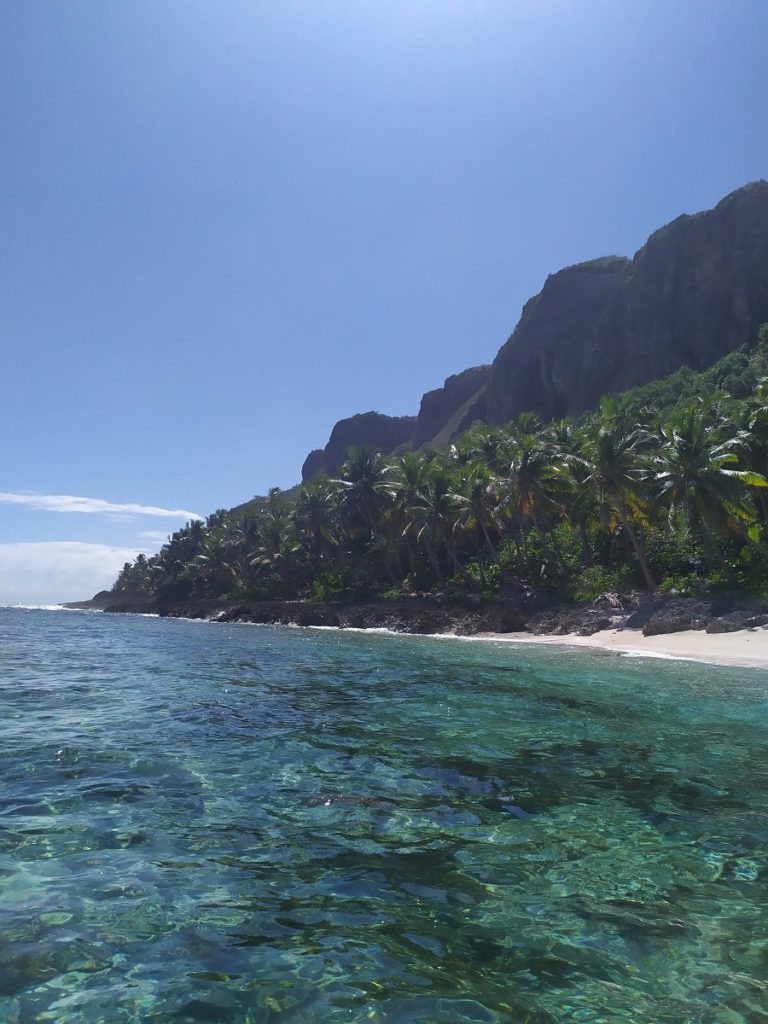 Because of these beaches, the Samaná Peninsula and its beaches are considered the most beautiful in all of the Caribbean.

The Samaná Peninsula: a brief history

At times like this, I really don’t like to retype long Wikipedia texts. So briefly and abstractly about the history to give you a general impression of the place.

READ
How much is a vacation in the Dominican Republic. Tour prices 2022.

And today, Samana is the crown jewel not only of the Dominican Republic, but of the entire Caribbean. 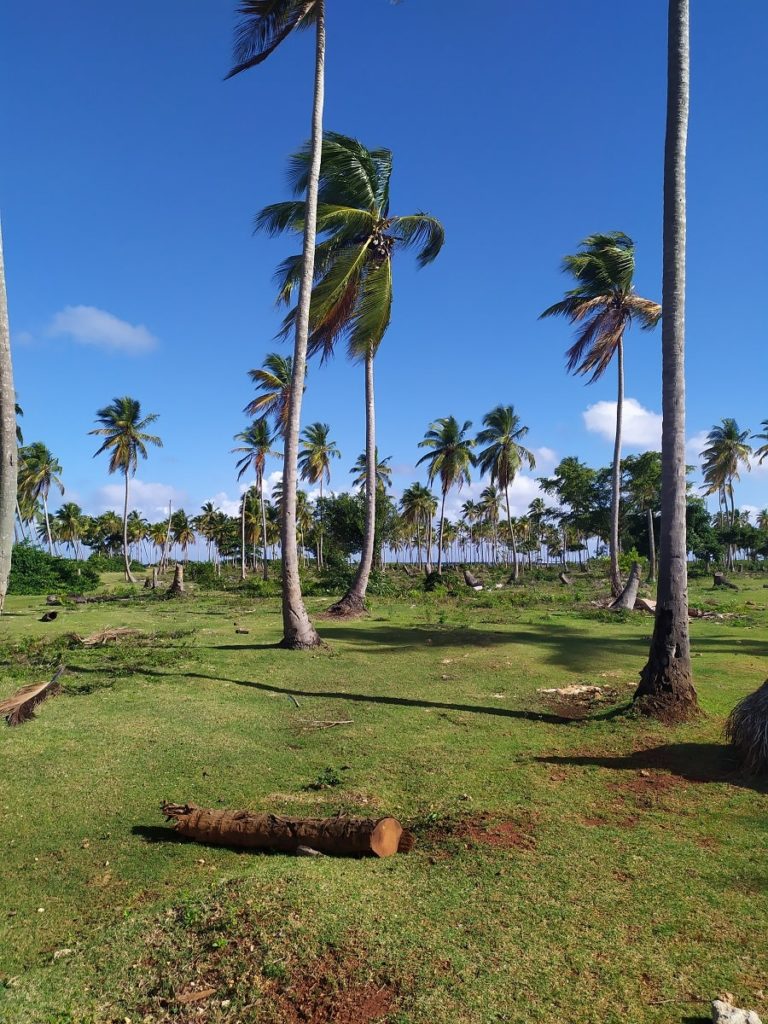 We are in a village on the Samaná Peninsula driving to the ocean with these palm groves.

General facts about the Samaná Peninsula

The capital city of the peninsula is Santa Barbara de Zamana, with a population of about 100,000 people. The peninsula is washed by the Atlantic Ocean to the north and by the Bay of Samaná to the south.

Due to its climate: a comfortable temperature and high humidity – this is one of the greenest regions of the country. Also played a role in this slow development of the territory by man. On the peninsula there are actually three roads. And all the settlements are located along them. 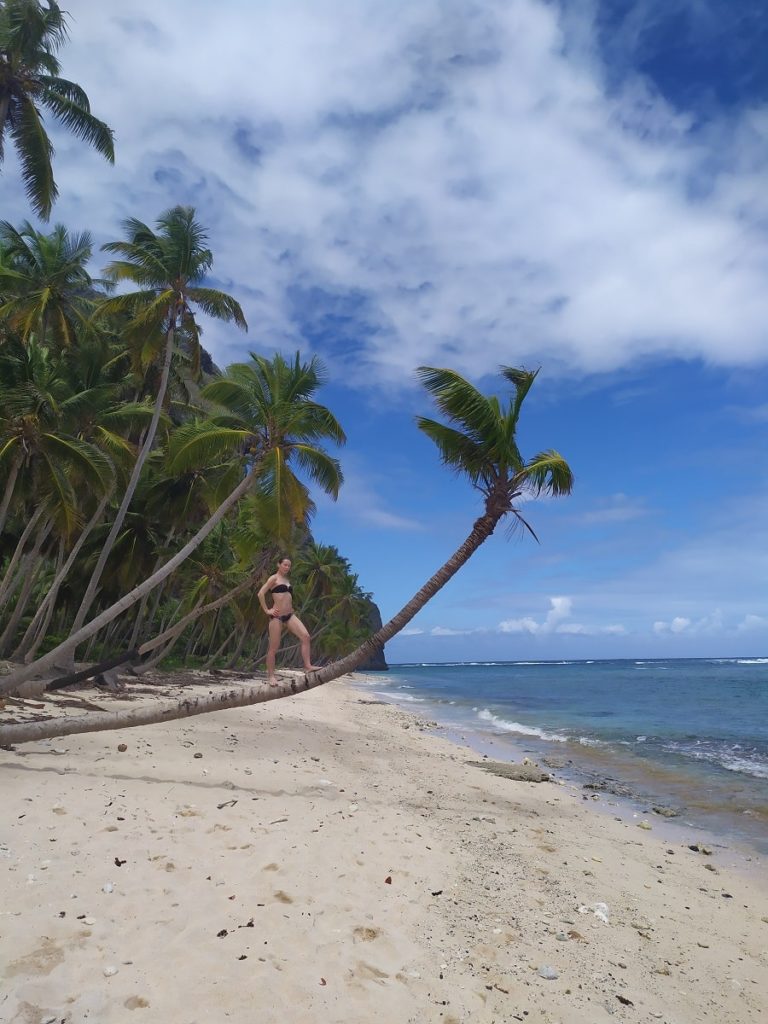 My wife and I are at Fronton Beach. The beach is long and in different parts there are different views. More photos from this place will follow.

The Samaná Peninsula: how to get there?

Today, the Samaná Peninsula is connected to all major provinces of the Dominican Republic by good roads. Relatively recently, six years ago a toll road was opened, which has halved the travel time from Santo Domingo.

You can get to the peninsula by the following means:

Below will be, travel time by car and bus from different resorts and cities in the country.

The travel time will be as far as the town of Sanchez. And this is the first town, right at the entrance to the peninsula. If you plan to drive to Las Galeras, add another 60-90 minutes. And to Las Terenes, it’s only a half hour and $10 for the toll road.

The toll road between Santo Domingo and Sanchez for a car will cost about $10. Another $10 from Sanchez to Las Terenes.

Cities of the Samaná Peninsula: how to choose a resort

READ
Holidays in the Dominican Republic in January 2022. Weather and temperature