You can get to the city center (Pham Gu Lao tourist area) from Ho Chi Minh City Airport by bus or by shuttle and cab.

How to get from Ho Chi Minh Airport to the city center at night? It can only be done by taking a cab or by booking a hotel transfer.

If you order a cab in Ho Chi Minh City at the counter at the airport – you pay there at a fixed rate, then leave the building, find the right line, where you will be put in a cab; pay anything above that amount is not necessary. If you are looking for a cab on your own – it is recommended to go by the meter, it should be cheaper.

The cab ride will take about half an hour; it may take longer if there is traffic jam. The most reliable companies in Ho Chi Minh City are Mai Linh and Vinasun.

Keep in mind that Vietnamese cab drivers don’t speak English very well, so you should write down the address on a piece of paper. 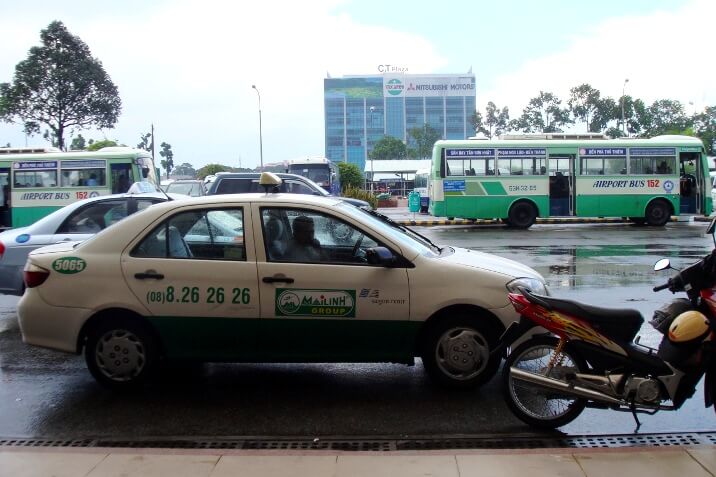 READ
How much does a vacation in Fukuoka cost? Prices in 2022

If you are wary of cheating and price markups from local cab drivers, you can pre-book a transfer from Ho Chi Minh City Airport to your hotel. In this case, a driver with a sign will meet you at the arrival hall, help you with your luggage and quickly take you to the right place in the city, and the price of the trip is guaranteed not to change.

This way to get to Ho Chi Minh City from the airport is suitable for those who travel with a lot of luggage, traveling with children or large companies, as well as those who arrive in the city at night.

If you want, you can order a car to other cities in Vietnam (for example, to Mui Ne or to Vung Tau):

You can book a transfer on the Russian-speaking site Kivitaxi. We have used this service many times, and always got us to the right place quickly and on time. If you need more information, read our review of Kiwitaxi.

The cheapest way to get from the airport to downtown Ho Chi Minh City (Pham Gu Lao tourist area) is by city buses. 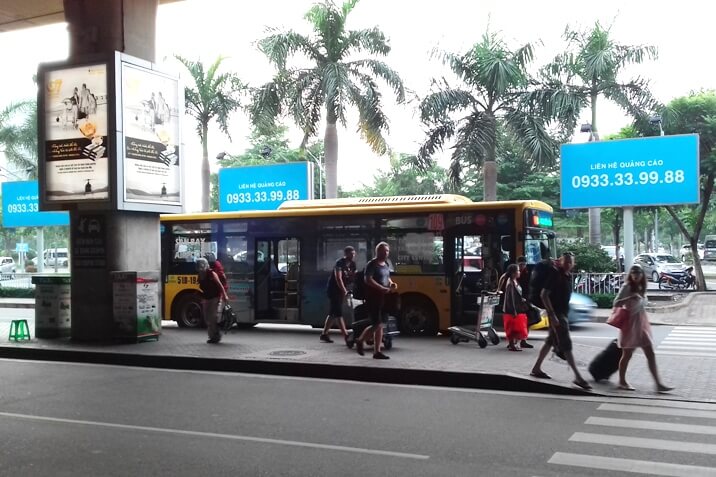 If your plane arrives at night, you won’t be able to get to downtown Ho Chi Minh City by bus.

The airport bus stop is located next to the bike parking lot, across from the Burger King restaurant. To get there, walk a little to the right after you enter the street from the international airport terminal. The stop is not marked with any sign, so either look for a waiting bus or ask airport staff for directions.

All routes stop at the bus terminal near Ben Than Market. This place is the western end of the Pham Gu Lao tourist area, so you’ll find cheap hotels and restaurants nearby. If you take bus 152, get off near Ben Thanh Market; if you take bus 109, you can get off at the market or drive a little farther to September 23 Park.

Please note: as of February 2018, a subway concourse is under construction near Ben Thanh Market, so the bus stop has been temporarily moved to nearby Nam Nghi Street – all traffic now goes through it.

How to get from Ho Chi Minh City Airport to the city center: cheap and convenient.

In 2016, a new bus route was launched from Ho Chi Minh City Airport (Tan Son Nhat) to the city center, making it very convenient to get to many places without resorting to local cab services. 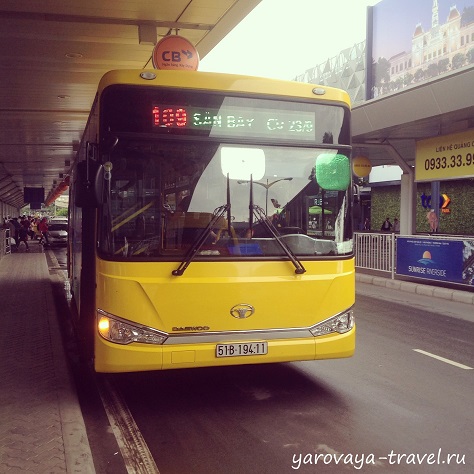 The new bus route from the airport to the center of Ho Chi Minh City (Saigon).

I flew to Ho Chi Minh City and tested the new mode of transportation, was satisfied, and now I will share some useful information with you.

There are two terminals at Ho Chi Minh City Airport: International Terminal and Domestic Terminal (domestic terminal, flights within Vietnam only). Both terminals are located next to each other, within a five-minute walk from each other. Remember this, friends, and do not take a cab when you are urged to go from one terminal to the other.

READ
How to fly cheaply to Vietnam - 7 ideas

When you arrive at one of the terminals and go outside, you must cross the road at the crosswalk to the pedestrian area. 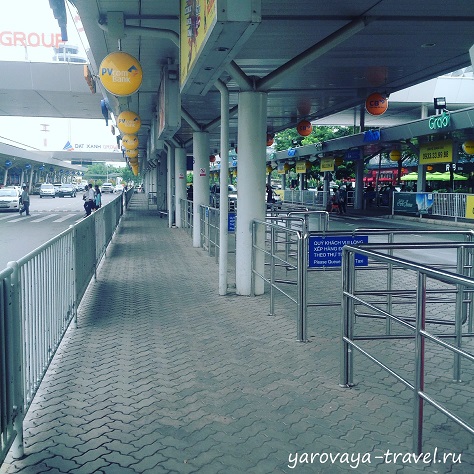 There is another road ahead, but you do not need to cross it. In the pedestrian zone there is a ticket counter for buses to downtown Ho Chi Minh City. There is one at the international terminal and one at the domestic terminal.

The counter is conspicuous and impossible to miss. Of course cab drivers will want to stop you on your way and some of them will definitely tell you that there are no more buses to downtown Ho Chi Minh City. But it’s actually quite easy to get to the center by bus. 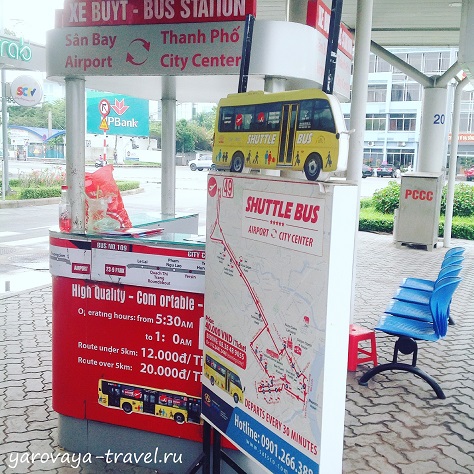 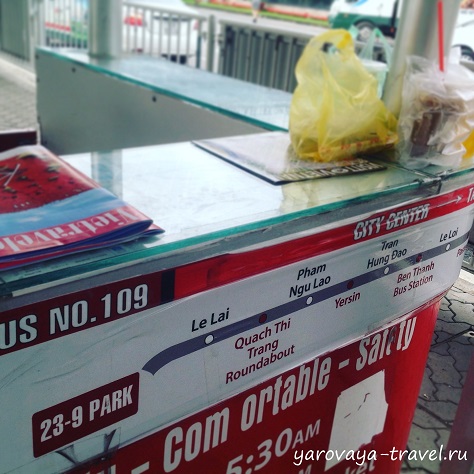 There are Vietnamese girls on duty at the counter who speak perfect English. They know the city well, tourists ask questions about how to get there, show them on the map where they need to go and they are eager to help by explaining at which stop they should get off. 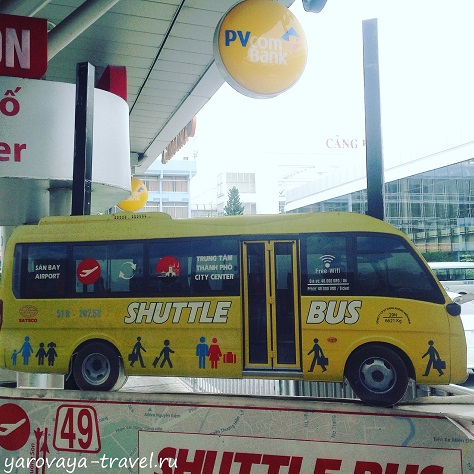 At the reception, the girls will tell you the easiest way to get there. There is a detailed map of Ho Chi Minh City with the main hotels and tourist attractions, as well as the bus route. It is very easy to navigate. You can take a picture of it to show the bus driver the stop where he will have to drop you off. 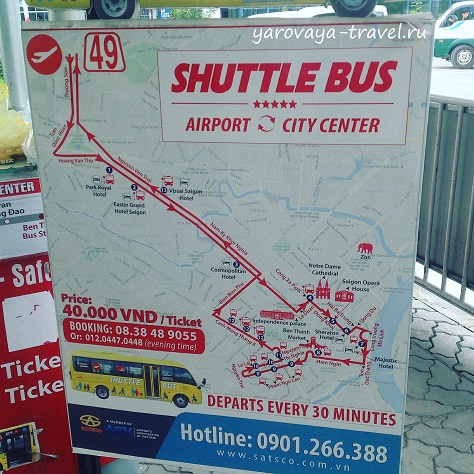 READ
Seasons in Nha Trang: weather by month and temperature. When is the best time to go?

We boarded at Domestic Terminal, the bus pulled up from International Terminal almost empty. We bought the tickets at the counter, the price was 20 thousand dong per ticket. We didn’t have any luggage but if we had any, they would charge us a nominal fee.

The fare depends on the length of your trip. We had to go to the Consulate General of Russia in Ho Chi Minh City, the distance was more than 5 km, so the cost was 20 thousand VND, but if the trip is less than 5 km, the fare would be only 12 thousand VND. 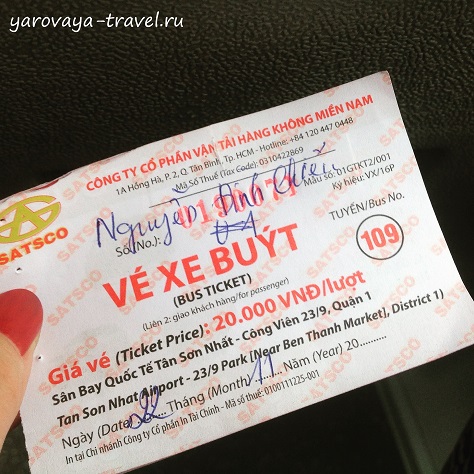 The operating time of this bus is from 5:30 am to 1:30 am the next day, which means that the bus runs 20 hours a day and does not work only 4 hours deep at night. If you arrive exactly at this time, then you have only to resort to cab services.

The bus is comfortable, with air conditioning. 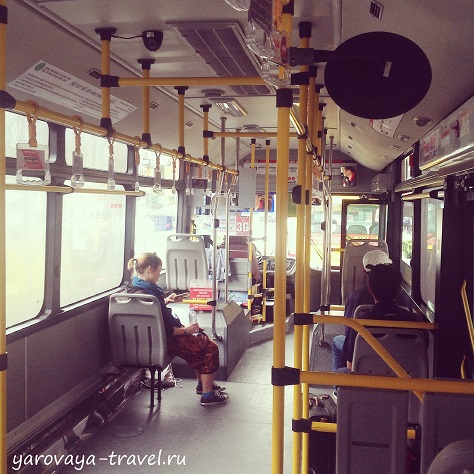 READ
Vietnam in February 2022. Weather and where to rest best

Buses and cabs take about 30 minutes to get downtown, but during rush hour traffic jams can double that time.

Friends, take note of these routes. Read here where to pass the time while waiting for a plane in Ho Chi Minh City. If you need to go from Hanoi Airport to the center of the city, see here.