I have already written about how to fly cheaply to Thailand from Russia. There are also a number of articles on the blog about moving between different cities and islands, and there just mentioned all the ways to transport travelers. However, when it comes to domestic flights within Thailand, only AirAsia is mentioned, although there are several airlines flying in Thailand. As a matter of fact, this article is intended to partially fill this gap.

By the way, as it turned out that the Internet is full of outdated information, some airlines simply do not exist, had to Google for a couple of days on this topic. Well, I remind you, the best way to look for tickets is to use specialized flight search engines: Aviasales.ru or Skyscanner.ru.

The most famous and popular low-cost airline among travelers. The number of destination cities is large, it flies not only in Thailand but in all neighboring countries. Airasia is all flying to Malaysia, Cambodia, Laos, Myanmar, Hong Kong, Bali, Singapore, India, China, Japan, etc. Often holds promotions and you can fly for pennies. So if you live long in Asia, sign up for their newsletter specials.

Another popular low cost airline in Thailand. The ticket price is not much different than AirAsia, and the service is high on reviews. Yes, I myself have flown with them a few times and liked it better than with AirAsia. Flights mostly just around Thailand, the number of destination cities is about the same as AirAsia as far as Thailand is concerned. The bank card with which the ticket is purchased should be with you, as it may be asked at the airport. 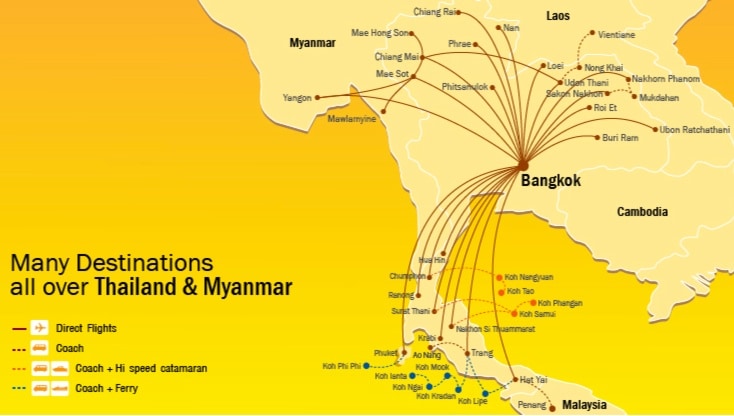 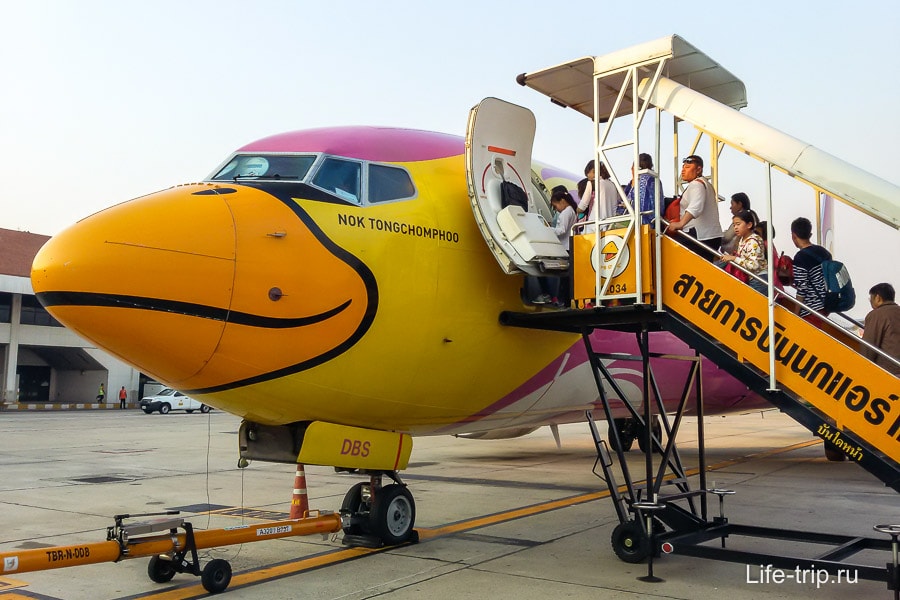 The former SGA Airlines. Represents flights on small planes to several destinations. All reservations and ticket searches are done through the Nok Air website, which means you do not need to go to the Nok Mini website.

This company is not a low-cost, so the tickets are twice as expensive as previous airlines. It flies not only within Thailand but also to neighboring countries (Malaysia, Cambodia, Laos, Singapore, Hong Kong). Unfortunately, only Bangkok Airways flies directly to Samui, so if you want to get to the island quickly, you’ll have to shell out some money. A cheaper option is plane+ferry transfers from AirAsia and Nok Air. 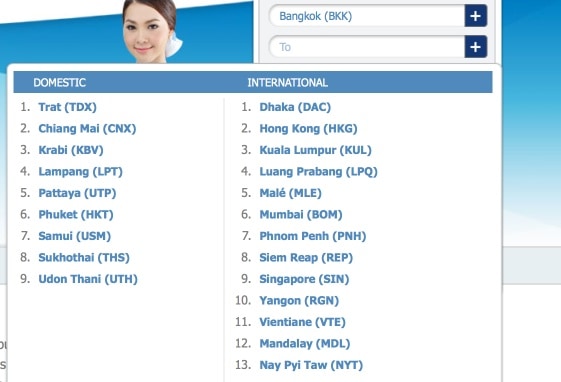 Flies all over the world, including flights from Russia to Thailand. Great service, praise all, but tickets are more expensive than others. In Thailand, prices are about the same as Bangkok Airways or even more expensive. 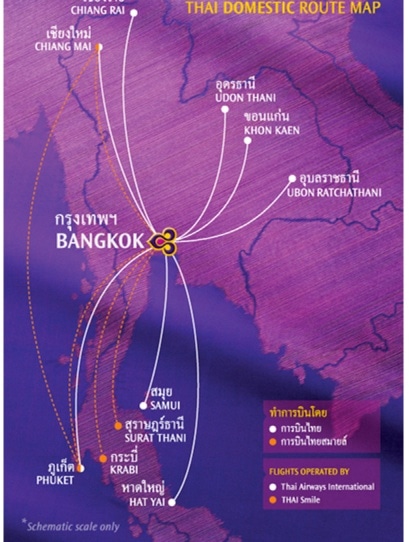 For 10 years I spent 16 hours a day doing travel guides. One and a half years ago, a stroke almost killed me. I survived, but am struggling with paralysis.

Does not fly in Thailand, but may be useful for those who want to fly inexpensively from Samui or Phuket to Penang for Thai visa. While there are other options in the case of Phuket, only expensive Bangkok Airways flies from Samui.

Charter flights, not regular. It’s like they have only one plane. Book only by telephone, you can not buy on the website. Prices do not know. Flies from Bangkok to Chiang Mai and Phuket, as well as neighboring countries (Korea, India, Indonesia, Japan).

A small airline, flies from Chiang Mai to Pai, Mae Hong Son, Nan and Pitsanulok. Does not fly every day, so check the schedule. Ticket prices are relatively high for short distances, but you can fly Cesna.

Phuket Air (Phuket Air) www.phuketairlines.com The airlines were banned from flying to the EU quite some time ago, then they stopped flying in Thailand. As far as I know, they don’t fly now. There is no information on their website.

Through the ticket search form on the website, I could never get anything other than “Not Flight Route”. That is, what this airline now offers is unknown. It used to fly from Bangkok (Don Muang) to Chumphon, from where people would transfer to Lomparaya speedboats and sail to Samui, Phangan and Tao. But now Lompraya cooperates with Nok Air.

READ
Where to eat tasty and inexpensive food in Phuket?

The company itself is Cambodian and used to fly from Pattaya to Siem Reap. It was comparable to AirAsia, which flies to Siem Reap from Bangkok, but more convenient if one lives in Pattaya. The airline’s website is not opening at the time of writing, so it’s not clear what became of it.

P.C. Air http://www.pcairline.com Their only plane was impounded in Korea in 2012, haven’t flown since.

P.S. Did you forget something or write it wrong? Write it in the comments. By and large, it’s enough to know AirAsia, Nok Air and Bangkok Airways…

Choosing insurance is difficult, so my Top Insurance to Asia is to help you out. I read forums all the time and use insurance myself. From experience, the best place to buy from Polis812. They accept Russian cards.

Large database of hotels are on Yandex.Travel. Keshbek 10-30% points Yandex. Also need to check prices on the Russian copy of booking Ostrovka. All accept Russian cards. 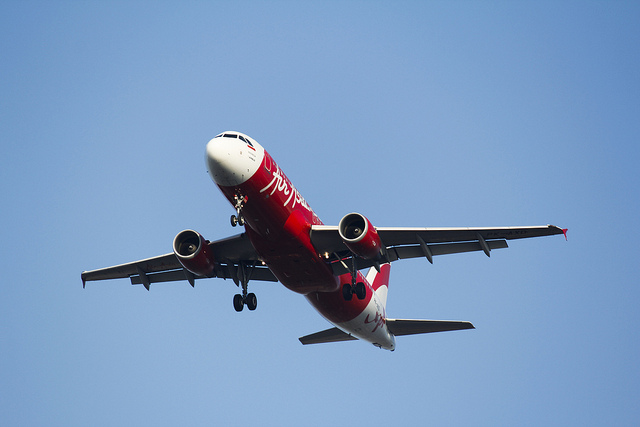 Flying on low-cost airlines in Thailand is a pleasure. Often the flight costs less than a bus ride. With $100 in your pocket, you can easily fly around the country. In this article I will talk about the major low-cost airlines that fly in Thailand and neighboring Asian countries. And most importantly – I’ll share the most effective algorithm for finding the cheapest tickets to any low-cost flights.

Due to the possibility of cheap flights on lowcost airlines both within Thailand and to other Asian countries, independent travel in Thailand is easy in terms of organization and extremely budget-friendly.

Below I’ll reveal the most effective algorithm for finding cheap tickets for discount airlines; give examples of ticket prices for a number of destinations; list the main low-cost carriers that fly within Thailand and from its cities to other Asian countries; and give a list of the codes of the main airports in the country.

The most useful articles on our site for those who are going to Thailand:

Tickets for 10-30 dollars is a normal phenomenon for low-cost airlines (both Asian and European), it’s not difficult to find and buy them. The main thing is to know where to look. Indeed, where to look for them? There is, alas, no one-size-fits-all solution – you need to do a little quest to find them.

I would outline the procedure for the most effective search for the cheapest airline tickets for low-cost flights in Thailand (however, it is also suitable for other countries) in three points. To maximize your chances of finding cheap tickets, you need to follow these steps:

First, however, you need to read this article to understand what lowcosters there are in Thailand, what destinations they fly to, and how much tickets for their flights cost. 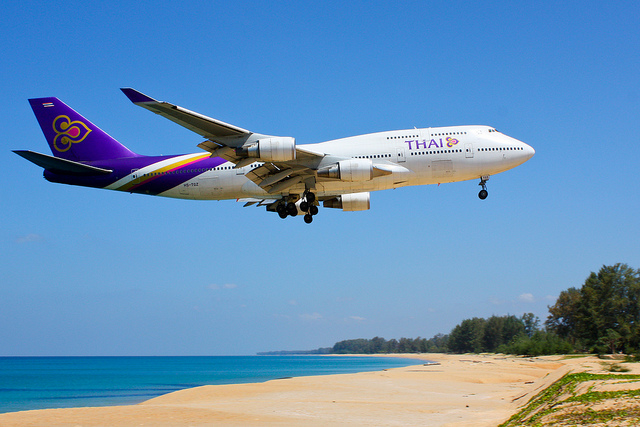 Prices for flying around Asia by lowcosters from Thailand

Here are some starting ticket prices for flights from Thai cities to other Asian countries offered by low-cost airlines (here and below is the cost per one-way ticket):

READ
Thailand in July 2022. Weather, reviews, where to rest

By the way, you can fly from Thailand on Norwegian lowcost airlines to Norway and Sweden for $160-180 per one way ticket.

Here we will discuss low-cost carriers flying within the country.

We flew this airline from Bangkok to Phuket. Our flight was free (we didn’t even pay for the luggage – it’s already included in the price). And in general, the tickets for that flight cost about 700-800 baht ($ 25), and you can buy at such a low price even a few days before departure.

An example of using our 50 euro Bravofriends voucher to cover the cost of two tickets from Bangkok to Phuket:

According to airline rules, you’ll fly with you free hand luggage up to 7 kg and luggage up to 15 kg; you’ll be treated to peanuts and water on board; and you can also self-book any seat in the cabin for free online. This is probably the kindest low-cost carrier on earth.

Bonuses: free luggage up to 15 kg (including sports equipment), free choice of seats in the cabin.

Often it is this low-cost airline that offers the lowest prices for flights within Thailand. Here is an example of prices from Skyscanner: 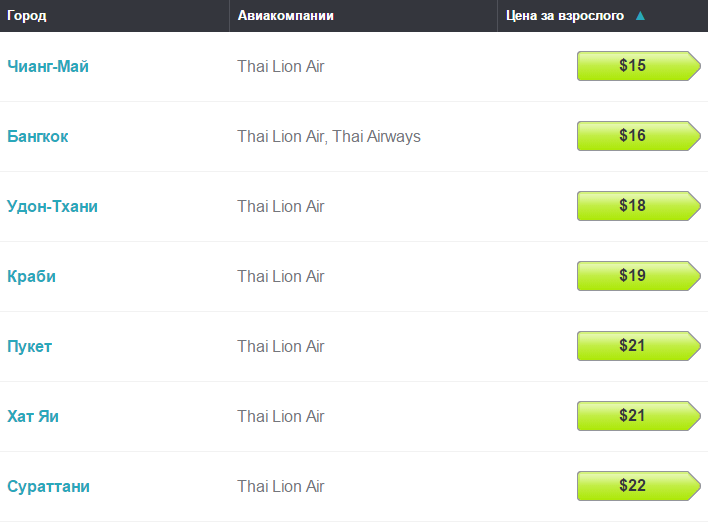 Destinations of flights are marked on the map.

As you can see, there are many routes, and combined solutions (flight + bus / ferry to the desired location) are also possible.

Airfare with this Thai low-cost airline starts at 800-900 baht.

Malaysia is home to what is undoubtedly Asia’s most famous low-cost airline, but its network is so vast that whichever route you take across Asia you are likely to come across an AirAsia offer. It flies from Australia to Saudi Arabia, from Japan to Indonesia. The airline also flies intra-Thailand, and good prices are regularly found.

Map of the route network of AirAsia in Thailand and neighboring countries: 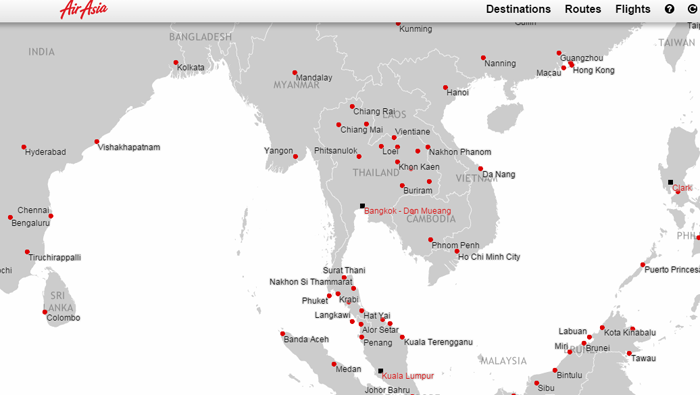 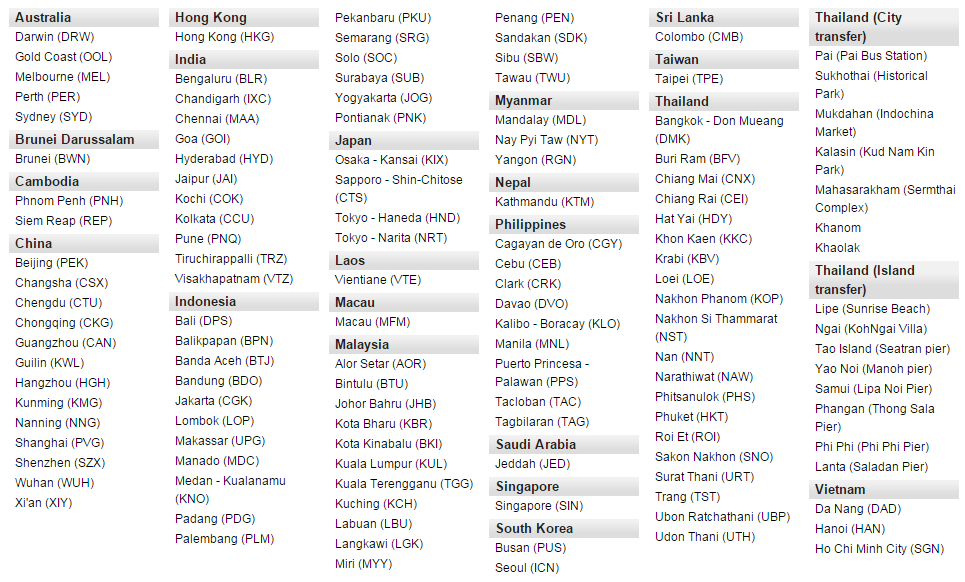 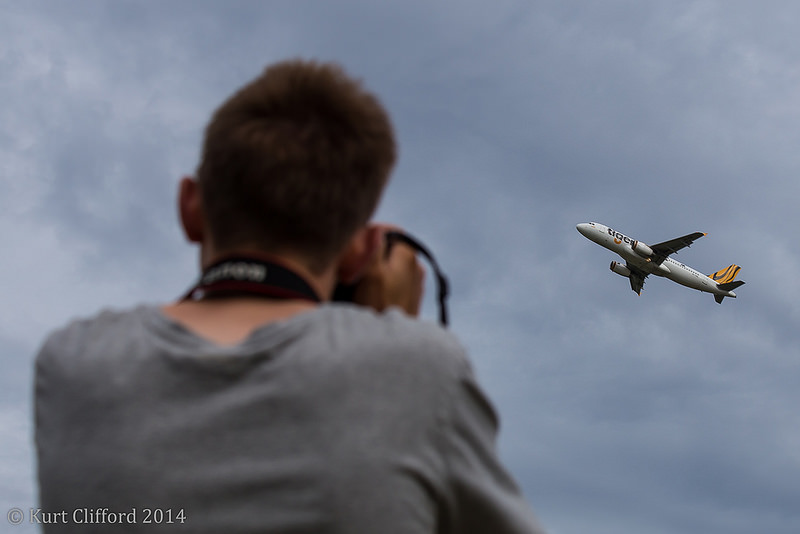 Travel lodging. Search for hotels on Hotellook.ru – it compares prices from a variety of booking systems and finds the best one.

A list of major airlines that allow you to fly inexpensively from Thai cities to other Asian countries.

READ
Resorts in Thailand: where to vacation?

Vietnam’s top budget airline with extremely low prices and excellent punctuality. During our month and a half trip to Vietnam, we flew on this airline three times (flew for free thanks to Bravoavia vouchers). Our third flight was just from Vietnam (Hanoi) to Bangkok.

The airline asks to pay separately for luggage: the cost depends on weight and destination (from $7 and up). On board you can buy inexpensive food and drinks: for example, lunch costs about 2-3 dollars.

An Australian low cost airline with a large route network (even reaches Hawaii). This low-cost airline flies from two Thai airports: Bangkok and Phuket. It connects in Singapore and its fares are not especially low; however it makes it possible to transit through Singapore (in this case one may spend up to 96 hours in the city-state without having to get a visa). 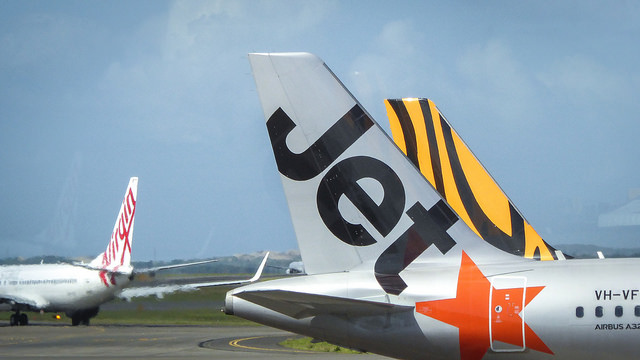 Flies from Bangkok (Don Muang) to multiple destinations via Singapore. List of cities: 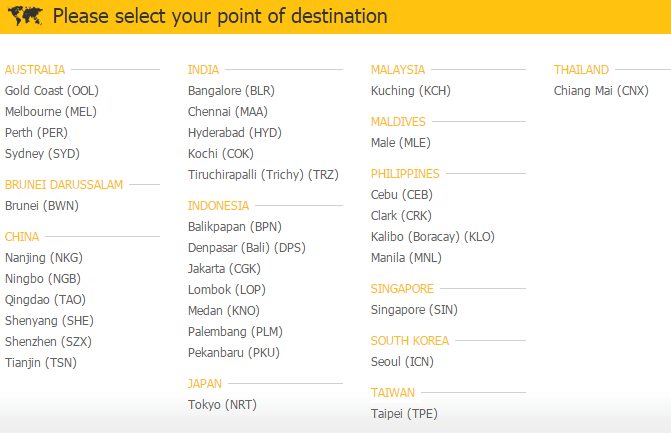 Malaysian low-cost carrier. Flies to Southern Thai resorts: Phuket (from Penang), Krabi (from Penang), Samui (from Penang and Kuala Lumpur). Often offers good prices. Great as an alternative to ground transportation for those going to do Thai visa to Penang Island.

IndiGo is an Indian airline that originally only operated domestic flights, but now flies to other countries (Thailand, Nepal, UAE, Oman, Singapore). From Bangkok you can fly to the following cities:

SpiceJet also flies from Bangkok to many cities in India.

The main low-cost airline and the largest airline in the Philippines with a large route network throughout Asia.

Somehow, when designing a flight itinerary around Thailand, I needed a list of the codes of all the major airports in the country. I made it up and broke it down by geography. I’m sharing, maybe you may find it useful.

Thailand 0
Ayutthaya Travel Guide Maroona At the junction of the rivers Lopburi, Prasak and Chao

Thailand 0
Tuk Tuk in Pattaya. Routes, prices and how to use tuk-tuks January 2019 (updated:

Thailand 0
Transport in Bangkok The capital of Thailand, like in any major metropolis in the

Thailand 0
What you can bring from Thailand as a gift – cosmetics, medicine, food I