Until 1796 the land of Massandra near Yalta was state treasury. Later the palace changed a few owners until in 1830 it was passed to Count Mikhail Vorontsov’s children Semyon and Sofya.

While they were young, their father was in charge of the arrangement of 731 hectares of Massandra land. During this time there was built a two-storeyed mansion with a large veranda, planted a garden and paved paths for walks in the surrounding woods. Countess Elena Gorchakova, passing by the estate, wrote down: “When you pass by the forests of Massandra, the mysterious darkness reigning everywhere, reminds you of the sacred groves of ancient Gaul. From afar you can admire the beautiful summer house of Prince Vorontsov, built on a plateau in the forests of Upper Massandra: it is surrounded by lush greenery and is refreshed by a mountain stream.

The calm atmosphere of resort life was broken by the storm of 1878, which did not spare the creation of the count. His son Semyon Mikhailovich Vorontsov began to build a new house and ordered the project to the French architect Etienne Bouchard.

In 1881, works on the construction of the palace, which in his sketches looked like a medieval castle, began. On November 30, 1881, Bouchard died before completing the project. Prince Semyon Vorontsov passed away in 1882, bequeathing the estate and the unfinished palace to his wife Maria Vasilyevna, who passed it to Ekaterina Andreevna Balashova on the terms of a life-time rent.

In 1889 the history of Massandra as the imperial residence begins. Alexander III, who loved to vacation in the Crimea with his family, became the new owner. In order to make the palace fit the new status, it had to be rebuilt. For this purpose, the tsar invited architect Maximilian Mesmaher, whose project was approved in April 1893.

The area of the palace was considerably enlarged by additional galleries, terraces and balconies, and during the year of construction the building acquired a new look. Mesmaher chose the early Baroque style – in other words, the Louis XIV style. The project called for the addition of a kitchen wing and a stable, but the work was suspended because of the emperor’s death. Nicholas II, in memory of his father ordered the palace to be completed, finishing work was completed, but the young Tsar did not show much interest in Massandra, sometimes stopping here for holidays after picnics or hunting in the surrounding area. The new palace was never finished. The summer residence of Nicholas II was set up in Livadia.

Interiors of the palace

On the first floor there were ceremonial halls, a billiard room with oak panels in the English Renaissance style, a dining room, a reception room and the study of His Imperial Majesty. The lower vestibule at the entrance is decorated with blue and blue tiles. Mesmacher was one of the first in his era to use tile stoves as an element of decoration. On the second floor were rest rooms and royal bedchambers. The rooms on the third floor were planned as bedrooms for the imperial children, but remained empty for years after the palace was built.

The interior decoration of the building is dominated by wood of different species: oak, walnut, maple, mahogany. The ceilings are decorated with stucco and paintings. The floors of the interior rooms, terraces and balconies are decorated with different in configuration and color mosaic tiles. Different styles – Gothic, Baroque, Romanesque and Classicism – are blended in the decoration of the palace rooms.

Maximilian Mesmaher also designed the court part of the park. In front of the western facade a French regular park with terraces, flower parterres and a shaped pool was laid out. In the park were placed 29 statues and 6 decorative vases. Behind the terraces there were orchards, which had been planted during the Vorontsovs’ reign.

Massandra Palace in the XX century

When the Soviet government came to power the palace was nationalized, and then there was organized the sanatorium for patients with tuberculosis. After the Great Patriotic war there was Scientific-Research Institute “Magarach”, which was engaged in researches in the field of viticulture. Soon after Massandra palace began to be used as a dacha for state officials of the USSR, on the upper floors of the palace were equipped with living quarters.

Museum in the palace

The beginning of the museum was laid in the time of Nicholas II; here, as in other residences, the halls were decorated with objects of arts and crafts and a collection of paintings. In the 19th century it was possible to buy a ticket to visit the palace gardens, and personal invitations were issued for VIPs.

During the Soviet era, the palace and the park were a closed object. On June 1, 1992, the palace opened its doors to the public, and a museum was opened there. On the first two floors of the building is an exposition of the palace interior of the 2nd half of the 19th century, created on the basis of the Alupka Palace Museum funds.

In addition to the decoration of halls, visitors can get acquainted with the documents and photographs telling about the life of Emperor Alexander III and Nicholas II, learn the history of the Massandra palace. Halls of the third floor are occupied by stationary exhibitions. 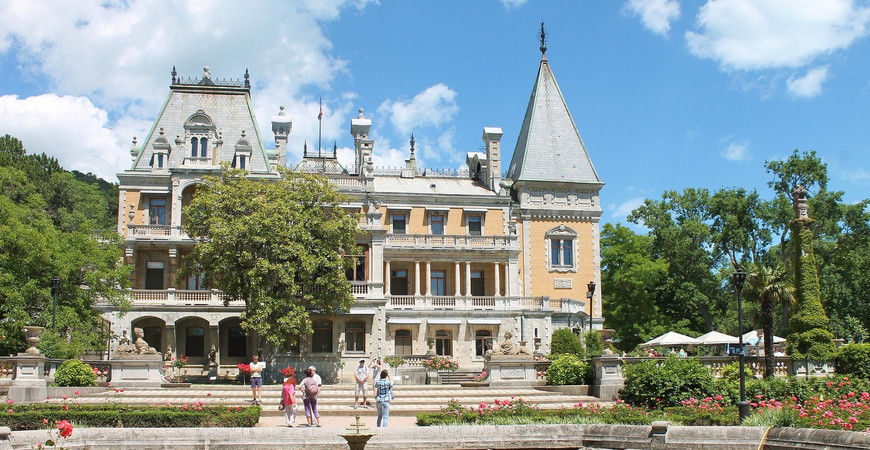 Massandra Palace is situated on the Crimean peninsula near the town of Yalta.

The palace was built in 1880s for MS Vorontsov – the son of a prominent statesman of the time, Count Mikhail Vorontsov, for which was built the famous Vorontsov Palace.

Construction of the palace in Massandra was suspended due to the death of the architect, and a few years later the owner died. A few years later the building was purchased for Tsar Alexander III. They built another floor above the two existing ones, made the facade more magnificent and decorated it with ornamental elements. The monarch’s death, however, interrupted work again, and only during the reign of his son Nicholas II did the construction nearly reach completion (there were still some improvements to be made). Unfortunately, the beautiful palace never became the permanent summer residence of the monarch family who preferred the Livadia Palace to it. The Massandra palace was mainly used as a hunting lodge.

READ
Rest in the private sector of Yalta. Prices for accommodation - 2022

After the overthrow of the monarchy, the building was nationalized and completed. The new authorities found a more practical purpose for it – before the Great Patriotic War it housed a sanatorium where people suffering from tuberculosis recovered their health. After that, the institute of winemaking was located here for a short time, and then the place was used by representatives of the ruling elite as a party dacha. Since 1992, the palace became a museum, keeping the name of Emperor Alexander III.

Prices in Massandra Palace in 2022

Single ticket for all exhibitions and expositions:

Excursion around the palace grounds:

Cost for all categories – 100 rubles.

For children from 7 to 16 years old the cost of a tour or the use of an audio guide – 70 rubles. Children under 7 years old visit the museum for free.

Before visiting it is better to read the actual prices on the official website of the Massandra Palace.

To get a discount ticket, you will need to provide the appropriate documents. You can visit the palace on your own or with a guide, waiting until there is a group.

Individual tours are conducted only by appointment. The price is 900 rubles.

The expositions of the palace are located at .

Massandra palace attracts attention with its elegance and eclecticism – it has changed several owners, whose views on the building’s look are reflected in an interesting mixture of architectural styles. No less interesting are the preserved interiors of the second half of the XIX century, which are the permanent exposition of the museum, occupying 2 floors of the building.

Visitors can see various decorative elements – stucco, frescoes, exquisite wooden carvings, tiles, which convey the level of masters and tastes of the nobles of that period. Tourists have the opportunity to see both official rooms (offices, reception rooms) and private rooms (bedrooms). The rooms are furnished with furniture, the decorative details of which are carefully thought out and reflect the different styles used in decorating the interiors at the turn of the XIX-XX centuries. Paintings by famous Russian artists and portraits of members of the royal family hang on the walls of the rooms. It is also interesting to see the porcelain items – vases and dinner sets.

The third floor of the palace is occupied by an art exhibition, which presents paintings and sculptures of Ukrainian artists, who worked in the 40-50s of XX century.

On the examples of these works you can trace how ideology influenced the art at that time.

In addition to the palace, the adjacent territory with a park and the stunning views that are admired by many visitors is of particular interest. In the park in the summer you can enjoy the beauty and fragrance of different varieties of roses. Walking through the park area, you can meet purple fields of lavender and admire many other plants. In addition, some sculptural compositions depicting the heroes of Greek myths have been preserved in the palace territory.

The museum works without days off, the main exposition and exhibitions are available for viewing from 9:00 to 18:00-19:00 from April to October, in the rest of the year until 17:00.

At 12:00 and 14:00 if a group of at least 15 people is available for excursions, dedicated to the architecture, sculpture and flora of Massandra palace.

How to get to Massandra Palace

You can get to the museum by public transport and by car from Yalta, Alushta, Simferopol, Sevastopol and other resort towns and villages.

READ
Kerch as a test: a storm at the crossing

How to get there by public transport

The fastest way to get there from Yalta; the nearest bus stop is the Upper Massandra Park. True, then you will have to walk along the Simferopol highway, the way can take about half an hour. In their reviews tourists write that from the parking lot near the barrier the rest of the way you can go for about 100 rubles by electric car.

From Alushta goes suburban trolleybus number 53, the stop is the same.

From Simferopol you can get to the necessary stop by local trolleybuses № 52 and № 55.

From Sevastopol you can get to the Palace only by changing the transport – first go to Yalta, and then take public transport of the city to the needed stop.

How to get there by car

The distance from Yalta to the museum is about 6 km, you can get there in half an hour.

From Alushta to the palace is about 28 km, which can be overcome in less than an hour.

From Simferopol to the museum to go about 2 hours, a distance of about 75 km.

From Sevastopol to the palace is about 91 km, the travel time – a little over 2 hours.

You can also get to the place by taking a local cab: “Taxi Comfort”, “Taxi Chaika”, “Taxi Wave” and others.