In Russian culture, swamps are not loved, they are shunned, considered dangerous and mysterious. More often than not, they are home to evil spirits, as evidenced by the great number of proverbs such as “sitting like a devil in a swamp” or “if there were a swamp, there would be devils”. Mysterious wandering lights (“dead man’s candles”) have spawned a large number of legends and fairy tales.

There are a huge number of swamps in Russia – they are one of the main elements of the landscape and many of them are impassable. But few people know that the fire in the swamp appears due to the ignition of the usual swamp gas. Villagers, who tell horror stories about kikimoras, go there in autumn in search of berries and herbs, and in general the swamp is not only a natural fresh water filter, but also a beautiful place, which, if you manage to get there, is impossible to forget.

1. Staroselsky Moss Bog is located in the Central Forest Reserve in the Tver Region, only 330 km from Moscow. Here you can see the real taiga, untouched by man since ancient times, walk along the ecological path with a guide and take a walk on the springy wooden planking that will take you deep into the swamp, which is about 10 thousand years old! In the middle of the swamp, there is an opportunity to climb a wooden tower and enjoy complete silence. 2. Sestroretsk bog is located in the resort area of St. Petersburg. As you know, in 1703 the area of the future St. Petersburg was a solid swamp. Sestroretsk Marsh is adjacent to Sestroretsk Razliv, created by Peter I. The Sestra River divides the bog into two parts. Here, in the swamp, there were fights during the Great Patriotic War, and on the towering dunes there are still military dugouts.

3.On the Mshinsky bog in the Leningrad region constantly lead tourist excursions, where you can photograph birds and animals, as well as observe them for a long time. The Mshinskoye bog is a state nature reserve of federal subordination and belongs to the territories of international importance. You can come here by train or by car, but it is possible to reach it only by hard-to-reach trails. 4 In Novgorod oblast in the Rdeisky reserve there is the largest bogland in Europe, occupying 37 thousand hectares, Rdeiskoye bog, considered to be one of the most unique bog systems in Russia. Last but not least, Rdeisky Monastery, standing in a hardly accessible part of the bog, of which not much is left nowadays, doesn’t decrease the number of tourists and pilgrims trying to get to it through the swampy mire. The reserve was created here in 1994 in order to preserve and study the swamp, rare and endangered plants and animals. This place has the ancient Russian name “Rdeisko-Polistovsky”, associated with the names of two local lakes.

5. The Vasyugan bogs are the largest bogs in the world! More than a quarter of the Earth’s peatlands are concentrated here. Vasyuganskiye bogs occupy an area of 53 thousand square kilometers, which is larger than the average European country. The bogs lie in the territory of several regions: Tomsk, Omsk, Novosibirsk and Khanty-Mansiysk Autonomous District. Vasyuganskiye bogs give fresh water to the whole Western Siberia, according to scientists, resist the greenhouse effect and are on the verge of ecological disaster because of the oil and gas fields, as well as the constantly falling stages of launch vehicles from the Baikonur Cosmodrome. 6. Tyuguryuk bog is the largest bog in Altai and as beautiful as everything in this region. Tyuguryuk bog is surrounded by high mountains up to 2400 meters above sea level, while the bog itself is on a ridge at 1500 meters. It is home to plants listed in the Red Book.

7.If you still believe in legends, then you need to visit the Great Bog in the Vologda region. Locals tell of a “swamp cub” with long gray hair living in the abandoned village of Tretnitsa on the bank of the swamp and of the remains of a wooden boat with gold at the bottom. At the same time they themselves actively collect cranberries and blueberries on the swamp.

8. One of the oldest in the Moscow region zakazniks is “Cranes’ Homeland” – the place of the largest pre-flying aggregation of gray cranes in central Russia. The list of birds occurring in the reserve includes 227 species, of which 54 are listed in the Red Book of the Moscow Region and 14 in the Red Book of Russia. “Crane Homeland” consists of two parts: “Dubna Marshland” and “Apsarevskaya tract” and is currently struggling with illegal construction on its territory, which could lead to the destruction of the unique preserve. 9.It is believed that the Moskva River flows from the Starkovsky bog near Smolensk Oblast. A chapel was built at the source of the river in 2004.

10. eutrophic bog is located near the town of Kirovsk at the foot of the Khibiny mountains and near Mount Lysaya. The area of the bog is almost 10 hectares. The eutrophic bog is a habitat for such non-cultivable species of plants as Cypress marsh and many other plants listed in the Red Book. Therefore, since 1980, logging, tourism and all activities that lead to the pollution of the natural monument have been forbidden in the swamp area.

We present you a selection of the most mysterious and enigmatic swamps, whose visit requires strength of mind and courage.

Since ancient times, the swamps have been considered a certain abode of evil – a refuge of unclean forces. Even now the swamps do not have the best reputation and are primarily associated with the place to perish, but fans of torturing their nerves are not afraid of this.

1. the Manchac Swamps in Louisiana

These perilous swamps are worthy to be sung by Edgar Poe and Howard Lovecraft: huge trees, branches touching the water surface, eerie roots sticking out as if trying to grab someone… These swamps in the early twentieth century tried to drain, but the venture was a failure: the built villages were destroyed by a storm, and all the locals were killed. One cannot help but be reminded of Lovecraft’s story “The Swamp of the Moon”, where a certain “guardian of the swamp” prevented the swamp from being drained, and ghosts led the workers and locals into the mire. 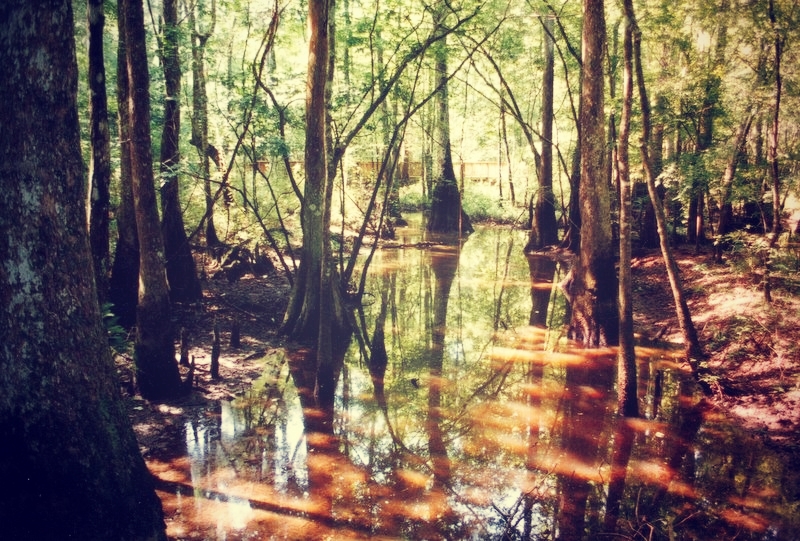 The Manchac swamps are steeped in legend. The locals claim that there are werewolves here, and at night you can hear them howling. The swamp is also fascinated by the corpses of long dead people that periodically surface. The swamps are believed to have been cursed by the voodoo witch Maria Laveau. 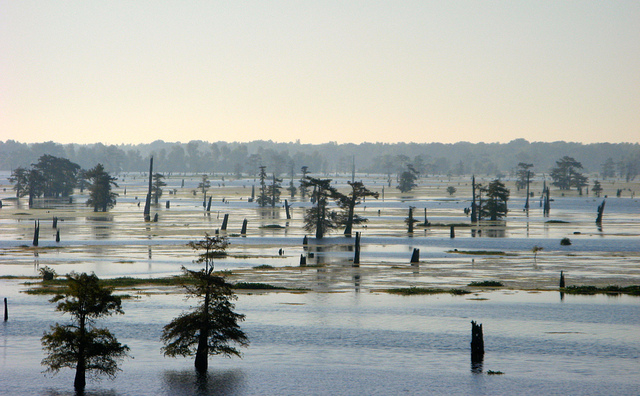 The swamps are located near New Orleans and are popular with extreme travelers, for whom there are boat tours. Especially in demand are nighttime canoe trips, when the moon reflects on the black surface and only the splashes of water cut through the night’s silence. However, you should be careful to test your nerves, as alligators live in these seemingly uninhabited areas.

2. the Bangweulu Swamps in Zambia

The place where water meets sky is how Bangweulu, the largest water system located on the Congo River, translates and combines lake, marshes, and floodplain. These swamps also have their own tale: according to myths, the swamp is home to the beast Emelah-Ntouka, which looks like an enormous rhinoceros. The locals believe it is capable of killing an elephant. 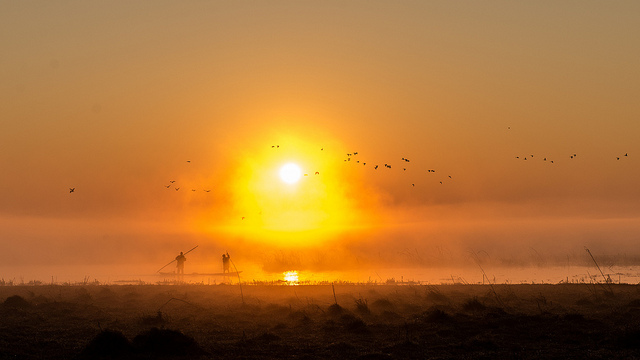 The ancient Pinsk bogs are located in southern Belarus and northwestern Ukraine. They are picturesquely situated in the Polesie region. The impassable swamps have preserved endangered plant and animal species, and have greatly influenced Polesie’s culture, where ancient Slavic pagan rites are still practiced today. 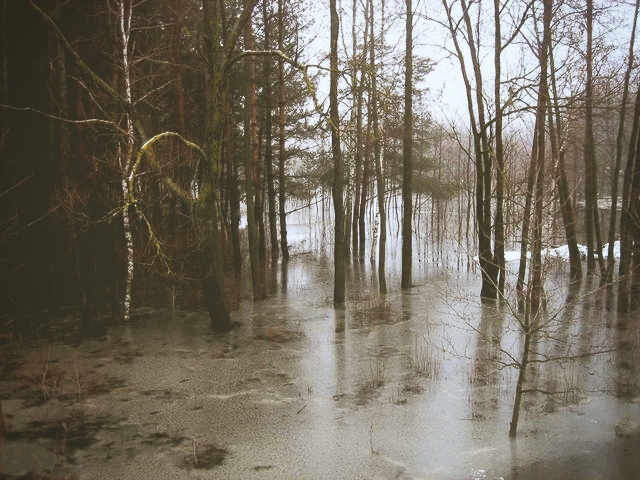 The Pripyat bogs hold an important place in Polesie folklore. According to legend, a whole city once went under water – coming to the swamp, sometimes you can hear the ringing of the bells of the sunken city. Another legend tells of a swamp serpent named Smutak. Maybe you’ll be lucky to find the fern flower that blooms on the Ivana Kupala in these mysterious places, which will reveal hidden treasures of the endless Pinsk bogs.

In the Pantanal, the largest marshland area, you don’t have to wonder about anything, because you’ll just get tired of doing it. Such an abundance of exotic animals and plants you probably will not find anywhere else: only crocodiles here are about 20 million! Pantanal is the ideal place for those who seek unity with nature, and who want to get as close as possible to the natural habitat of animals and observe their lives. 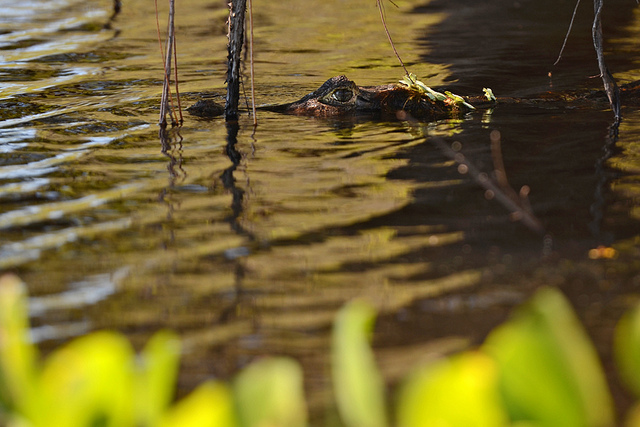 The reserve attracts not only tourists: adventurers still flock here in search of gold – according to legend, Eldorado is somewhere nearby. It’s also believed that countless riches are buried in the bowels of the Pantanal – supposedly the tribes of Indians who used to live here threw jewels into the lake while serving the gods. 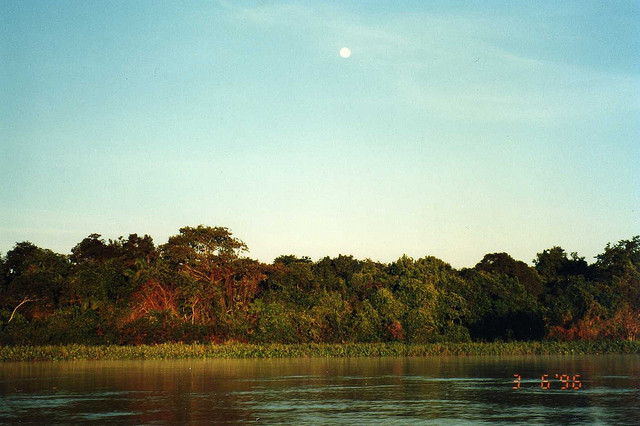 How to get there: You can take a flight from the Brazilian capital, São Paulo or Rio de Janeiro to Cuiaba. From Cuiaba, you can book a sightseeing tour or drive yourself along the Transpantaneira and Estrada Park roads by renting a car.

The swamp is known for dropping down around the edges instead of growing up, forming hills. The scientists are at a loss as to why this happens, and offer hypotheses: some think it is connected with the lowering of the ground water level, others are of the opinion that it is the thermokarst, and still others say that it is connected with the underground stream bed. One way or another, thanks to the notoriety of the swamp, a lot of tourists flock to it to feel its energy. 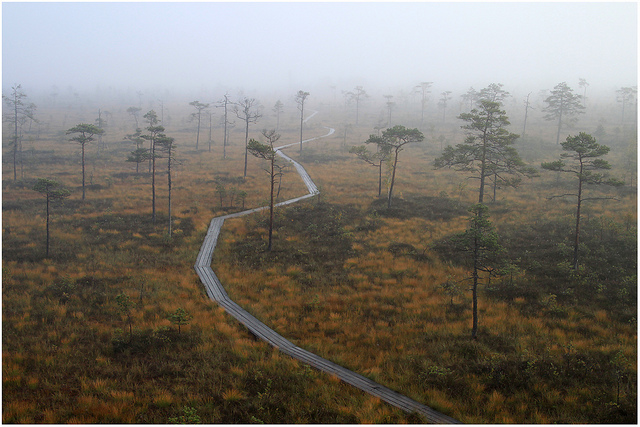 The mysterious swamp is located in the Kõnnumaa Nature Reserve. A narrow, 800-metre long boardwalk runs through it that leads to the bog window. You can swim here – if you have the courage, of course – it is believed that the water has healing powers.