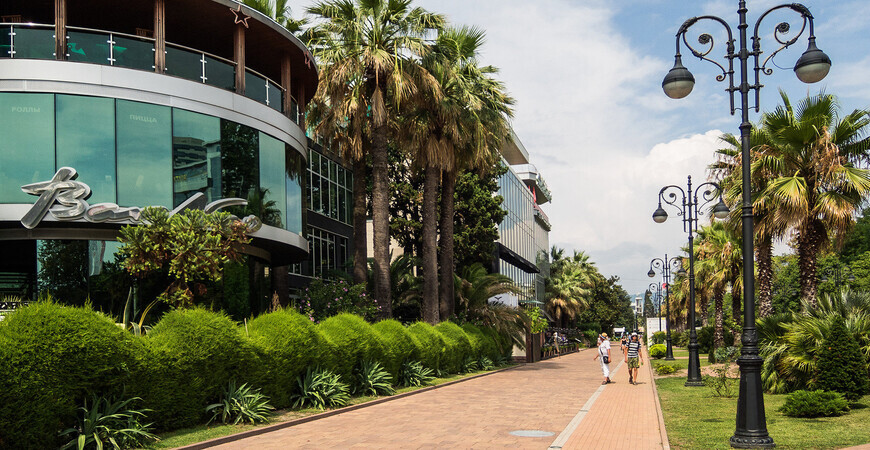 Navaginskaya street in Sochi is the main pedestrian street of the resort city. It begins at Kurortny Avenue, near the seaport, and ends at the railway station of Sochi. Navaginskaya street with its cypress and palm-lined avenues, cozy green recreation areas and flower beds was turned into a pedestrian street and upgraded just recently – for the 2014 Olympics. Before that, the street was used by public transport.

Navaginskaya pedestrian street in Sochi is loved by both residents and guests of the city. In the morning and afternoon you can relax from the resort bustle in the shade of subtropical trees, have a coffee or read a book on the bench – there is a bookcase for book-crossing. In the evening you can enjoy performances of street artists, enjoy the light and music fountain and sit on the summer terrace of one of the restaurants on Navaginskaya Street in Sochi.

In the photo of Navaginskaya Street you can see not only the abundance of greenery, but also some interesting sculptural compositions. The most popular sculpture is the ear “Make a Wish”. Inside the sculpture, on the bronze insert, there is a handprint. You have to put your palm to it and whisper your wish into the ear. The sculpture is located at 14 Navaginskaya Street. Also during the walk you will see the following sculptures: “Snail Bench”, a monument to the Sochi teacher, the Olympic symbols – the White Bear, the Leopard and the Bunny. Children will like the sculptures of fairy-tale characters: Cheburashka and Guy, Pinocchio and other heroes. At the intersection with Sovetskaya Street is located Museum of Sports Glory of Sochi. Another attraction hidden in the Shopping Gallery is the mosaic “Sea Bottom”, made in the workshop of Zurab Tsereteli. It is located at 9 Navaginskaya Street.

On the map of Navaginskaya Street in Sochi you can see that there are about a hundred stores. They are mainly concentrated in the Trade Gallery and several shopping centers: “Atrium”, “Victoria”, “Mir”, “Crystal”. Here you can buy both Sochi souvenirs or beach goods, as well as clothing and gadgets for technology. In the malls there are departments with children’s goods, author’s gifts and health food stores.

READ
Honestly about Golovinka. Reviews and prices for recreation - 2022

Boutique stores on Navaginskaya Street in Sochi are represented by Baldinini, Max Moda, Firenze, Armani and other brands. Of the medium-price segment and mass-market stores, Navaginskaya Street is home to: Kari, New Look and small departments with clothes from Turkey and Italy. There are also several discount stores, including the large Familia store.

Navaginskaya Street is one of the most popular places for a leisurely meal. Go to Surf Coffee, L.A.Coffee, Vanilla or Laverna for quality coffee. Coffee shops also offer pastries and desserts. Of the chain breakfast places on Navaginskaya Street there is “Shokoladnitsa” (entrance from the side of Kurortny Avenue).

Fast food chains such as Baskin-Robins, McDonalds, Burger King, KFC, and Black Star Burger offer quick snacks. There are several snack bars with shawarma, kebabs, and kebabs. You can have a solid lunch or dinner in one of the restaurants – there are facilities with Georgian, Russian, Asian and European cuisine. Local residents advise to pay attention to the following places: Asian bar “UMI” with dishes of Vietnamese, Chinese and Hawaiian cuisine; restaurant “Grill’Age” with a summer terrace and quality cuisine; Caucasian bistro “Lecho Grill”.

You can also spend an evening in an Irish pub “Dublin”, cabaret “Lighthouse” with exotic for Russians travesty show or in karaoke bar “Pashtet”. In general, Navaginskaya Street in Sochi is not considered a party street, there are not many institutions for nightlife. If you are looking for nightlife, you should go to the parallel Ostrovsky street.

The name of Navaginskaya street contrasts sharply with the names of the other streets – Lenina, Peace, Ostrovsky. The street was named after Navaginskaya fortress which was located on the site of the Cathedral of Archangel Michael in the 19th century. The fortress was destroyed in 1854 during the retreat of Russian soldiers. A fragment of that old fortress can still be seen in the art space “Fort”. Since then, the name of the fortress began to “wander” across the region – in the area of Vertodroma was a residential neighborhood Navaginka, near Tuapse – the village Navaginskoye.

READ
How to rest in Sochi in winter - 10 ideas. Weather and prices

The history of Navaginskaya Street dates back to the 60s of the last century. Initially it was planned to name the street Main, then – Leninsky Prospekt. But eventually, the Soviet authorities left the historical name associated with the Russian Empire. Already in Soviet times, it was planned to make Navaginskaya pedestrian street – these plans were announced in the 70s. As a result, the street became pedestrian only for the Olympics. By the way, the new plan proposed to make moving sidewalks – for the rapid movement of passengers from the railway station to the seaport. But the idea was abandoned because it could have had a negative impact on the traffic.

Sochi has many beautiful places, many of which appeared during preparations for the 2014 Winter Olympic and Paralympic Games. One of them is Navaginskaya pedestrian street. It begins near Sochi sea port, on Kurortny Prospect and ends near Sochi Railway Station. 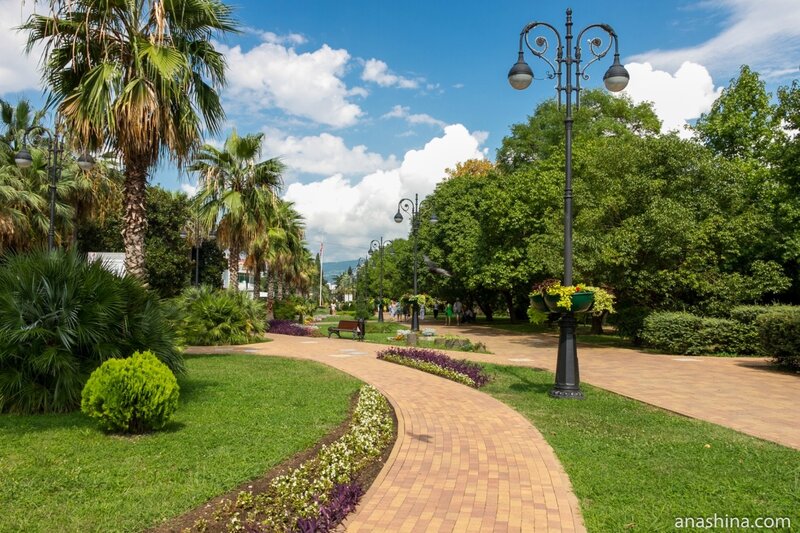 Navaginskaya Street, view towards the mountains

The name of Navaginskaya street originates from Navaginskaya fortress. The fortress was founded on April 21, 1838, and was named Fort Alexandria in honor of Empress Alexandra, who was celebrating her birthday on this day. However, on May 15, 1839, because of the coincidence of the name with another fortification (Kabardino – now Kabardinka *), the fort was renamed in honor of the Navaginsky Regiment, formed in Kerch in 1777 and distinguished themselves in the Caucasian War.

*The now famous Black Sea resort of Kabardinka, located near Gelendzhik, was founded in May 1836 and was then called the Alexander Fortification. “To avert misunderstandings arising from the similarity of the names of the fortifications of Alexandria and Fort Alexandria,” by order of Emperor Nicholas I of May 15, 1839, in honor of the Caucasian province of Kabarda, which was among the first in the Caucasus recognized the power of Russia, it was renamed to Kabardinoe.

READ
Holidays in Krasnodar Krai in the winter season 2021-2022

Navagin fort was repeatedly attacked by Circassians, withstood long sieges. In 1854 Russian troops were forced to leave it because of the events of the Crimean War – the invasion of the Crimea and the siege of Sevastopol. Leaving, the garrison destroyed the fortress.

In 1864 the detachment Dakhovsky again returned to these places and founded at the mouth of the river Sochi post Dakhovsky, which subsequently became a settlement, and gave rise to the city of Sochi. Of the remnants of fortress walls Navaga fort were built Michael Archangel’s Cathedral, the lighthouse and the boarding house Odintsov. The first two buildings survived to this day. Not far from the cathedral there is a small fragment of the old fortress wall.

Previously there was transport on Navaginskaya Street. On the eve of the Olympic Games it was made pedestrian and landscaped. Here you will see modern houses, beautiful plants, unusual sculptures and fountains. There are many shopping malls, cafes, restaurants and other entertainment venues.

We will start our walk along Navaginskaya Street from the end, from the railway station of Sochi. Next to it is a square. 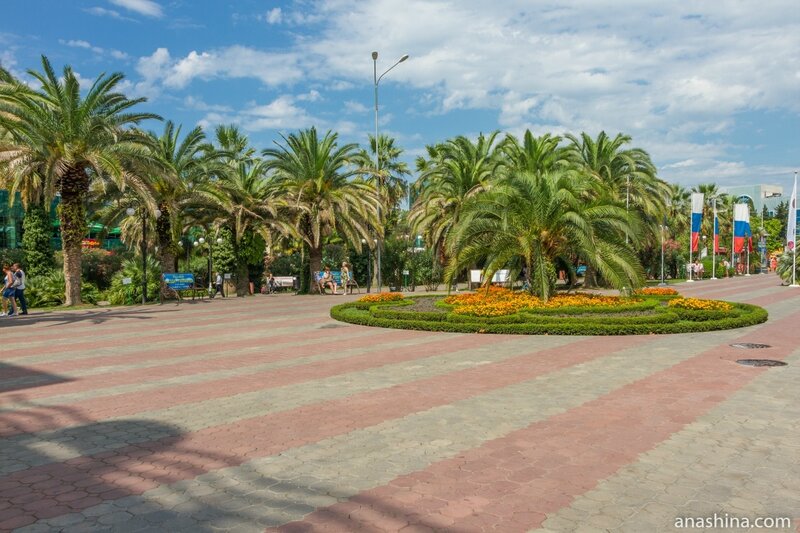 Then the street turns into an alley of palms and cypresses. Here you can see a lot of different flowerbeds of interesting form. And, of course, a lot of interesting subtropical plants.

On Navaginskaya Street is one of the most unusual attractions of the city of Sochi – sculpture Ear “Make a Wish” . On the bronze insert inside it is a palm print. The thing is simple: you should put your hand to the fingerprint and whisper your dearest wish into the ear. It is believed that it will surely come true! Address: Sochi, 14 Navaginskaya Street.

Another attraction of Navaginskaya Street is the light and music fountain . During a performance its jets go up to 14 meters high! Formerly there was a flowerbed with a palm tree in the middle, which has been replanted on the Platan Alley at Kurortny Boulevard.

Nearby is the Museum of Olympic glory of Sochi.

Nearby is a bench of unusual shape – in the form of a snail. 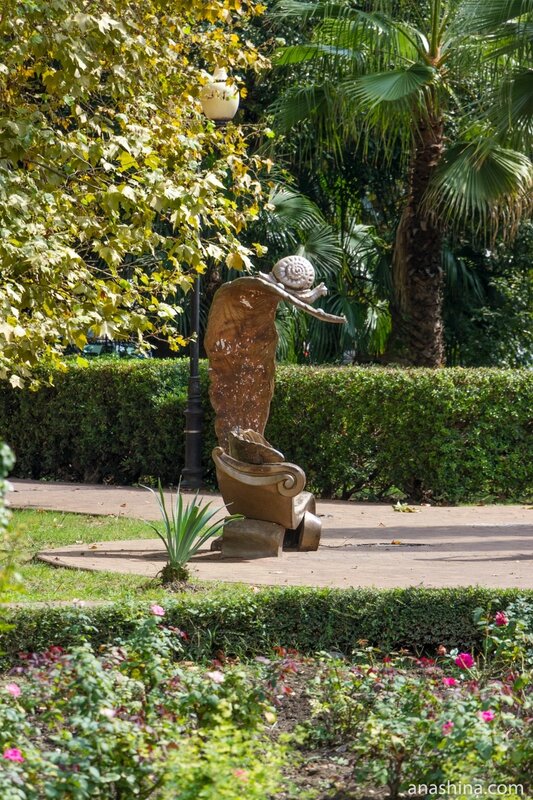 A little further away – the figure of a woman with children. This is the Teacher, or monument to the Sochi teacher.

Almost at the end of Navaginskaya Street (or its beginning, depending on direction), near the Kurortny Avenue there are the Olympic symbols: a white bear, a leopard and a hare. It is always crowded here, everyone wants to take pictures with funny figures.

Olympic symbols Navaginskaya street, in the direction of the Railway Station

I think the street is very nice. Probably, someone could grumble that it’s a fake and kitsch. But it’s really pleasant to walk here.

Navaginskaya street on the map

© Site “The Roads of the Middle Way”, 2009-2022. The copying and reprinting of any materials and photos from the site anashina.com in electronic publications and printed editions is prohibited.