Rest in the UAE in March

How tourists talk about vacationing in the UAE in March. What the weather, whether it rains and sandstorms, and how best to dress. Where in the Emirates to rest inexpensively in 2022 and what to do on vacation with children.

To many tourists, the weather in the UAE in March reminds the transition from spring to summer. At the beginning of the month is relatively cool +25 ° C during the day and +16. +18 ° C at night. It is usually coldest in Fujairah and warmest in Dubai. At the end of the month in most resorts is almost summer heat.

For a tan, the Arab Emirates is good at any time of year. The sun is hot here, so tourists are advised to sunbathe when the insolation level is low – before 10:00 and after 16:00. Be sure to take a good sunscreen and a hat on your trip!

Table of temperature in March, day and night:

In early spring, the sea is still not very warm, but some tourists write in reviews that this water is pleasant for swimming. In March, the water temperature in the Persian Gulf is +23 ° C. In the Gulf of Oman, it’s cooler +21 ° C, so it’s not so comfortable to swim here.

Larissa: “It seems to me that March is the best time to relax. It’s not too hot yet and the weather is great. The sea is warm and pleasant. The water temperature is about +22°C”.

READ
Weather and temperature by month in UAE. When best to rest

The table of water temperature in March:

How to dress for the weather

In March in the UAE the differences between day and night temperatures are large – up to 10-12 ° C. According to reviews, it can be cool in the wind or by the sea. If you like an evening promenade, walking under the stars or going on an excursion in the desert, grab a fleece, pants and a windbreaker.

Nadezhda Kotenkova: “The weather was getting more comfortable every day. It was especially felt in the evening. By the end of the vacation I could walk freely in a light blouse. 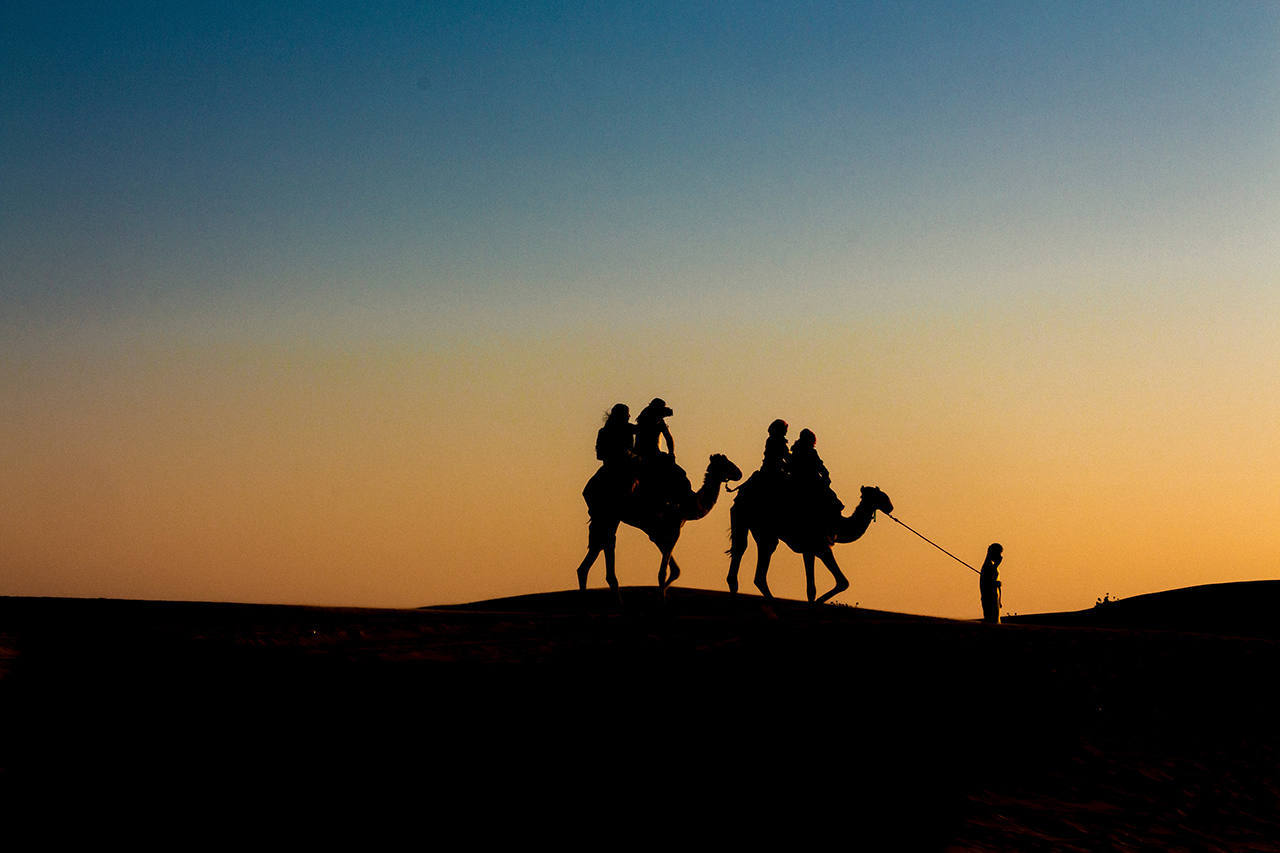 The Arab Emirates has a dry climate, but there are two to four rainy days in the first month of spring. Precipitation is brief, but an umbrella can come in handy.

When the atmospheric pressure changes, there is a lot of fog on the coast. This does not complicate the beach holiday in any way, but brings a lot of inconvenience to motorists.

According to feedback from tourists, in some years the March weather presents unpleasant surprises in the form of sandstorms. Natural disasters last from one to several days, and they try to wait it out at home. During the sandstorm you have to cancel tours and walks, but you can have a good time in the big shopping malls and indoor attractions.

Oleg: “The weather in Ajman was just atrocious. All eight days, then rain, then thunderstorm, then the sun with a wind of 10 meters per second. It blew out all the heat from our body. We took a hot shower to warm up in the hotel. 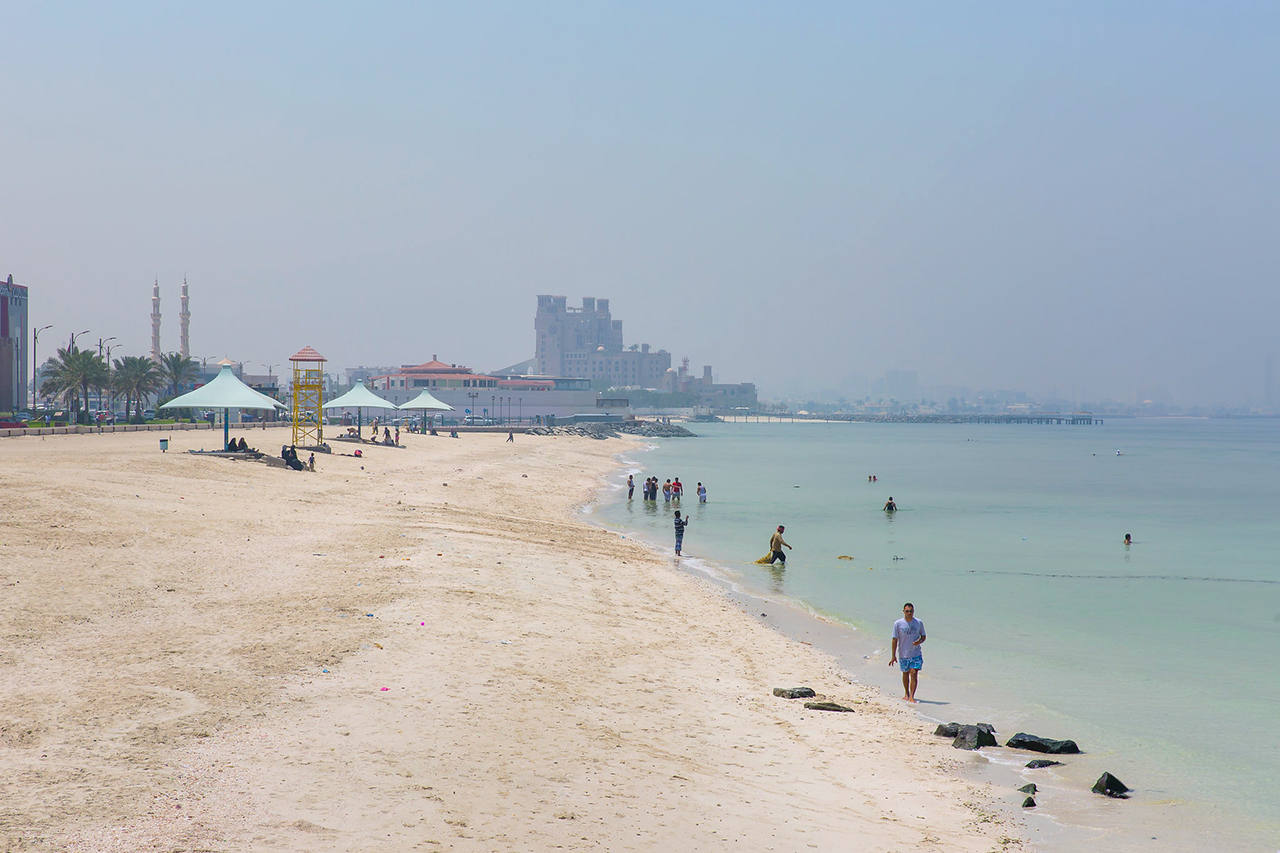 Prices for tours in the UAE in March 2022

In spring, the high season in the Arab Emirates continues, so you should not count on discounts. Prices for tours in the UAE in March vary depending on the location of the resort. The cheapest tours are in Sharjah and Ras Al Khaimah. The most expensive tours are to Fujairah, Dubai and Abu Dhabi.

See how much tours to different UAE resorts cost in March 2022. These prices are for a tour from Moscow for two people.

Attention! Not all Emirates are still open for tourists, so some of these prices may not be current. Check the links.

It is not a bad decision to come to the Arab Emirates during the spring break. The locals are very warm to children, and the resorts are full of good hotels for families. Even in late March the water temperature in the UAE for children is quite cool, so book a hotel with a heated pool.

Anna: “We vacationed in Sharjah in March with two children three and five years old. The kids came in with a cold but after two days it was gone. The warm sea air and walking barefoot on the white sand helped. The sea was cool for swimming, but we soaked our feet. 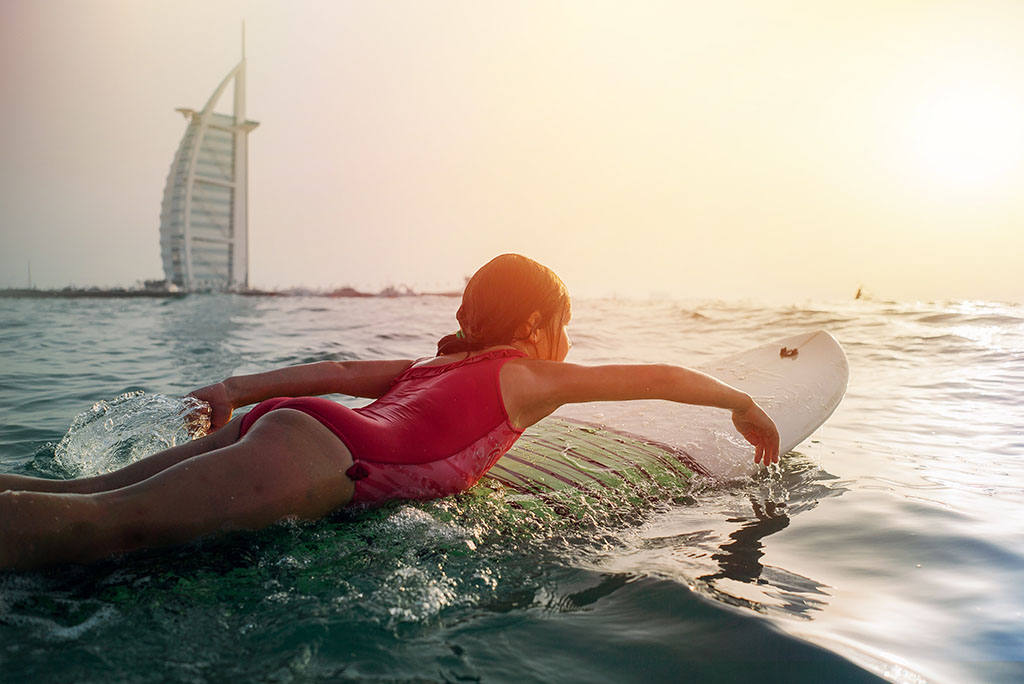 Is it worth a vacation in March in the UAE

After a long and cold winter, it’s nice to be in a place with sunshine and warm sand. If you add to this the traditional Arabian hospitality, comfortable hotels and a high level of service, a vacation at the sea is just luxurious.

Weather in the Emirates in March 2022 will suit anyone who likes moderate temperatures and can not stand the summer heat. In early spring it is warmest in the resorts that are located on the Gulf coast. The sea is warmer here, so conditions for a beach holiday are better. Diving enthusiasts prefer Fujairah, a resort on the Gulf of Oman.

READ
UAE in October 2022. Where to vacation? Weather and reviews

According to reports from tourists, in March in the UAE is not as humid as in summer. The mild and warm weather is ideal for people who have respiratory problems or suffer from severe pressure spikes.

March is a good time to explore the Arab Emirates as it bids farewell to winter and welcomes the hot summer, visiting attractions, Arabian markets and strolling along the promenades. Go on desert safaris, go to camel races, water parks and dolphinariums.

In March, a holiday in the UAE likes spectacular celebrations and competitions. On the last Saturday of the month the world-famous Dubai World Cup races are held in Dubai. The popular resort also hosts the OMEGA Desert Classic, an international golf championship. In late March, Abu Dhabi kicks off its shopping festival, which continues until early April.

UAE 2022: March weather. Can the Russians go to the Emirates during the crisis? 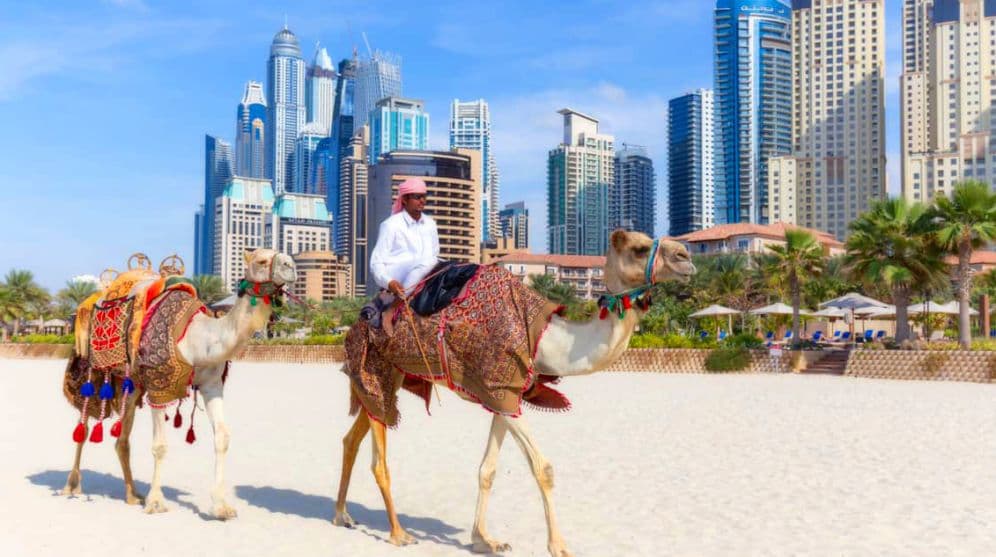 What is the weather in the UAE in March 2022? When can I swim in the Persian Gulf and the Gulf of Oman in March? Should Russians buy tours and tickets to the UAE now during a difficult political situation? We will tell in this article.

In Dubai, Fujairah, Sharjah and other resorts in the country in March begins the beach season.True, if you want during the holiday to swim, sunbathe and do shopping. then you need to understand about the features of the month of March.

March itself is a transitional month of the year. In other words, it can be warm in spring and hot in summer. In the UAE in March there can even be precipitation, but more on that later.

The beginning of the month of March is the time when tourists spend a lot of time outdoors and devote a day to walks, visiting excursions, going to the desert on safari or for photo shoots. In the early days of March it is comfortable to vacation with children, because it is not yet hot. In the middle of the month the weather gets warmer and at the end of the month you can fully engage in beach vacation.

READ
UAE in August 2022. Where to relax, weather and reviews

However even in the middle of March the weather can be changeable: a few days is hot and then the sky is covered with clouds, it rains and the air temperature stays at around +25 degrees.

Temperatures during the day

The air temperature during the day is +19 degrees. So if you want to walk the streets of Dubai or Sharjah in the evening, take some warm clothing.

Speaking of clothes. There are a lot of requirements for it in Dubai, especially for women’s clothing.

Women in Dubai need to wear clothes below the knees and covering the shoulders and cleavage area.

For those who want to visit the mosque on excursions, it is also better to bring a scarf.

Where is warmer in March in the UAE? 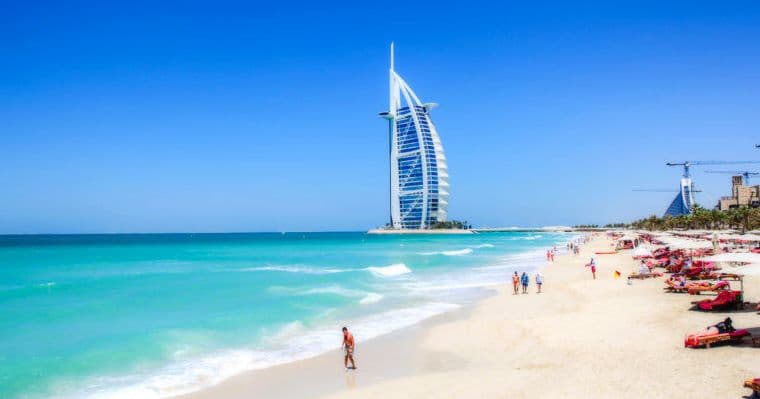 In Dubai and Fujairah, the thermometer is almost always 2-3 degrees lower.

Where can it rain in the UAE during March? 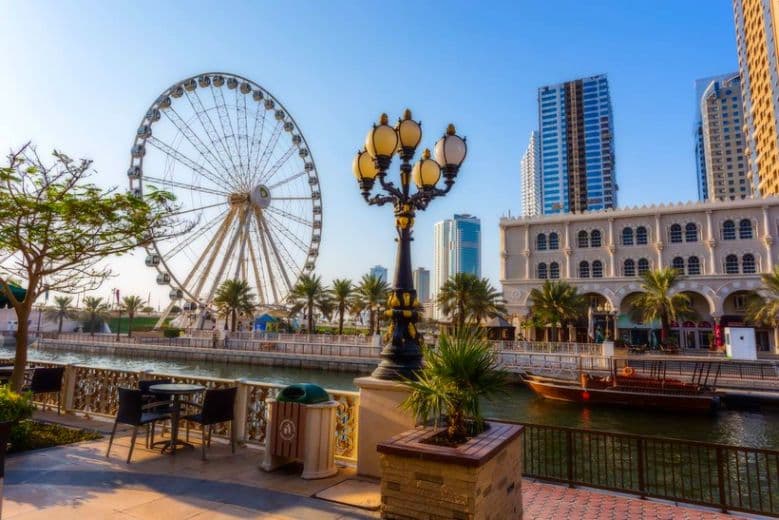 Dubai and Abu Dhabi are most likely to receive rainfall. As for Fujairah, this emirate will not experience rain in March 100%.

The water in the Persian Gulf in March is already +23 degrees. It feels normal in hot weather.

In the Gulf of Oman, the water temperature is lower in March at +21 degrees.

What to do in March in the UAE?

Go to a shopping festival and a gastronomic festival, sunbathe and swim, ride a camel in the desert, etc. ъ

Should Russians go to the UAE now during the political confrontation between Russia and Europe?

The UAE has not imposed sanctions against Russia like the European countries, so Russians can go to the UAE. Security in the country is controlled by the police and the likelihood of Russophobes “throwing themselves” at tourists from Russia is small. However, there have been no cases of security threats to Russians in the UAE.

As for the cost of holidays in the UAE now, it has increased. Tickets to Dubai and other emirates are expensive; tours also became more expensive.

The good news is that the entry conditions to the country have been simplified for Russians. You can come to the UAE with a certificate of vaccination in English, or only with a PCR test. Upon arrival, tourists will not be sent for testing. However, those who do not have either PCR test or certificate will be sent to the hotel for testing and self-isolation until the results are received.