How to climb the Burj Khalifa Tower inexpensively 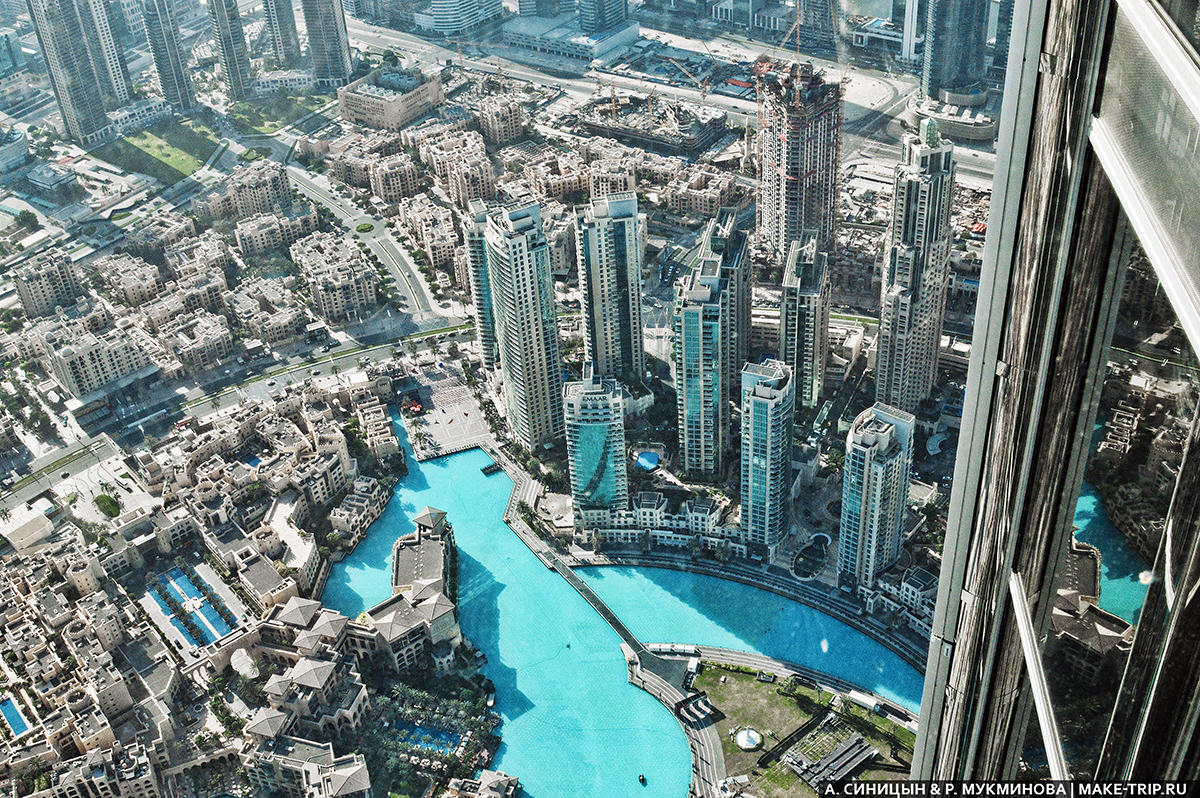 Climbing the tallest building in the world – the Burj Khalifa skyscraper in Dubai! How much does a tour to the observation deck cost? Where to buy tickets and how to save money? Read our review and tips.

It seems that the Arabs during the construction of the Burj Khalifa skyscraper decided to collect all the titles of “the most”: it is the tallest ground-based structure in the history of mankind, the building with the highest number of floors, the fastest elevator, the highest observation deck, and so on.

The blue dream of almost all tourists in Dubai is to climb this magnificent and breathtaking building. However, no one will let mere mortals to the very top. The maximum height available for tourists is 555 meters, or 148 floors. But the most visited floors are 124 and 125 (456 meters). It is on these three floors are the viewing platforms At the Top and At the Top Sky, where tickets are sold.

Burj Khalifa is a city within a city: there are offices, apartments, a hotel, restaurants, shopping centers and so on. In front of the building is the famous dancing fountain, which attracts crowds with its performances. The skyscraper is adjacent to the no less famous shopping center Dubai Mall.

– hotel search with a discount 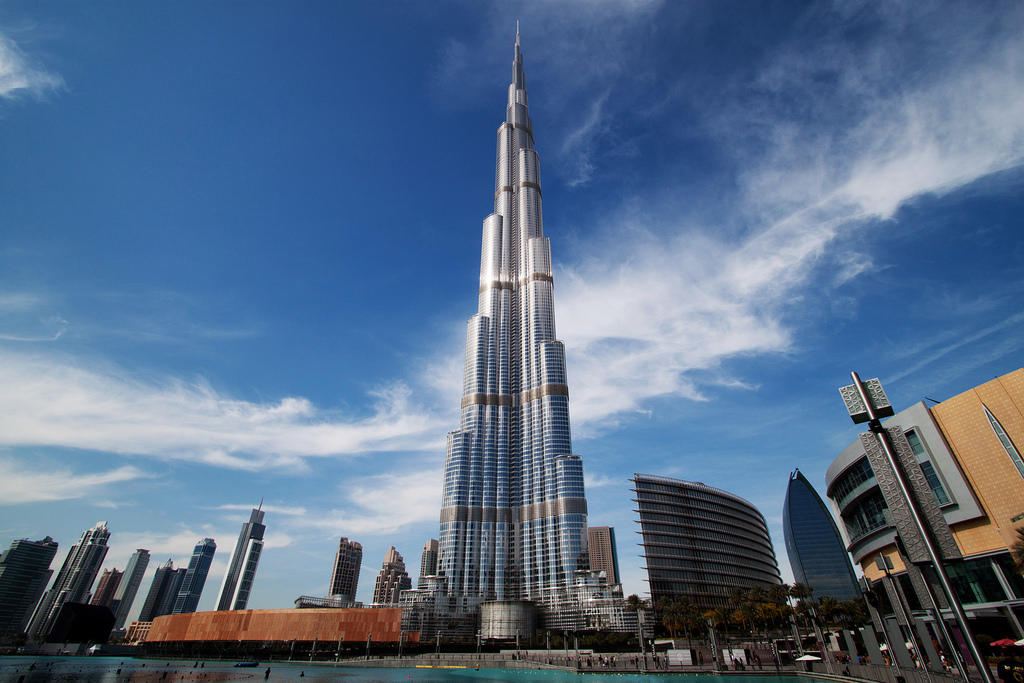 The Burj Khalifa skyscraper in Dubai clearly dominates even against the background of other high-rises. Photo: tucotuti / flickr.com / CC BY-NC 2.0 license.

Where to buy tickets for Burj Khalifa in Dubai

There are two ways to buy tickets:

We bought combo tickets: climb to the 124th and 125th floors of the Burj Khalifa + Aquarium. It was 390 dirhams for two.

Here are the ticket prices for Burj Khalifa on the official website:

READ
UAE in September 2022. Where to rest, weather and reviews 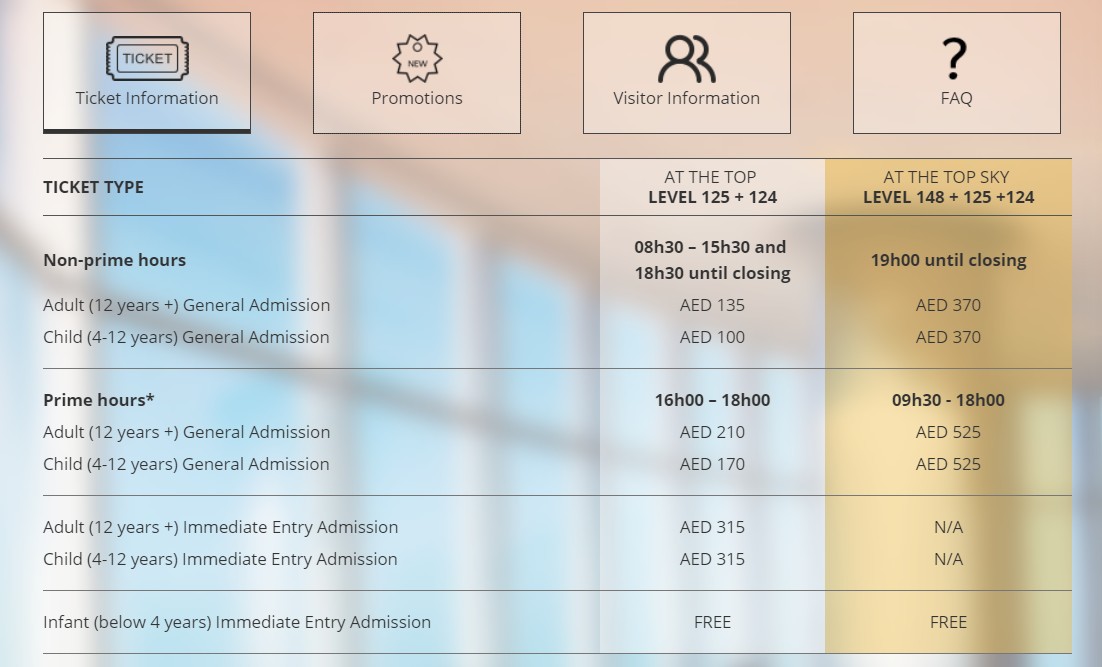 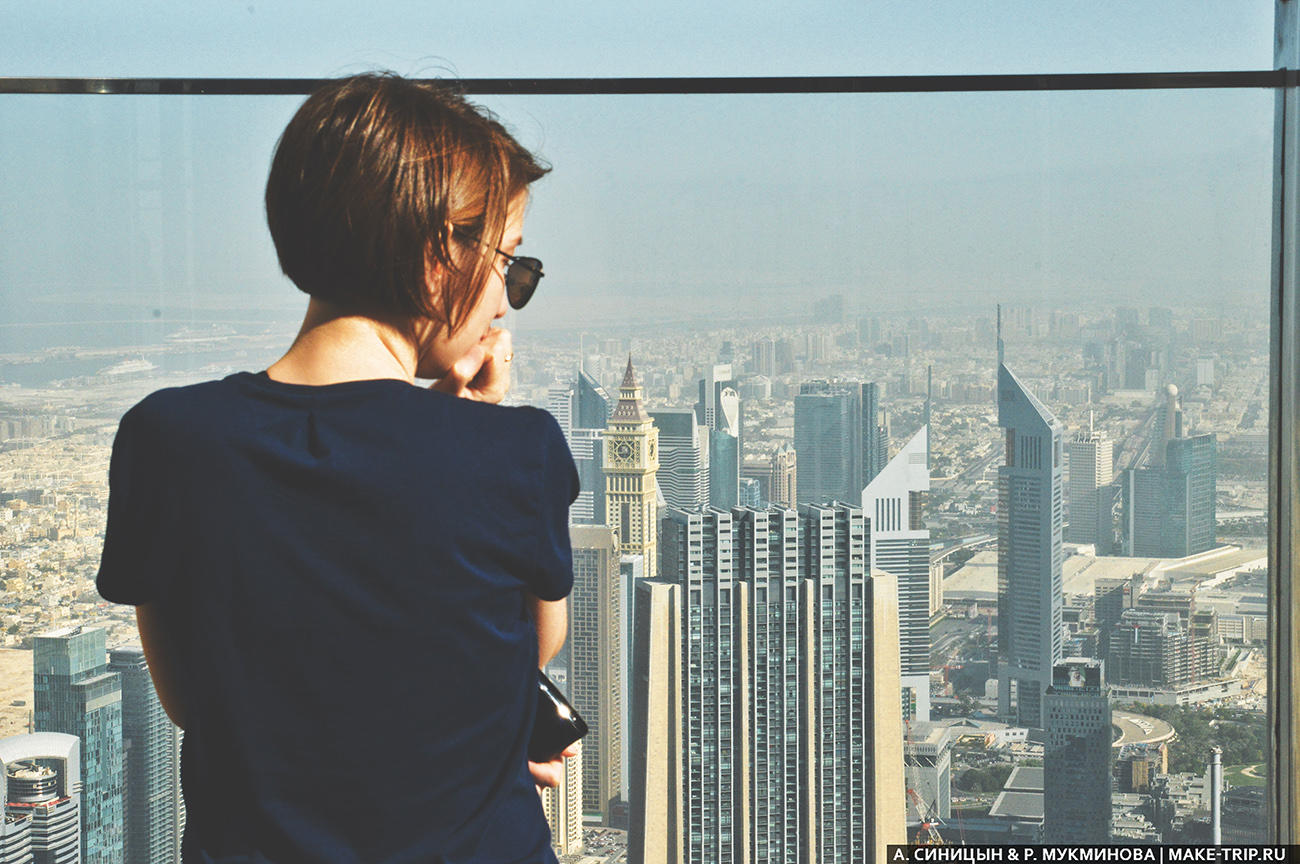 Admiring the view of the city from the observation deck.

Tips for buying tickets and visiting

Buy your Burj Khalifa tickets in advance, not at the Dubai Mall box office – it’s much cheaper that way! After payment you will receive a voucher by email. You must print it out and exchange it for a ticket at the ticket office.

What time to choose. If you want to visit the skyscraper in the daytime, it is advisable to take tickets for 8:30 or 9:00 – at this time there are not many people. At 10 and 11 am the sites are already crowded: all the glass panes are covered with tourists taking selfies, some are broadcasting live on Instagram, the lines are forming.

Prime time from 4:00 to 6:00 p.m. is the most popular time (and the most expensive tickets). You can see the sunset, the dancing fountain, and the lights of the city at night. But can you imagine the pandemonium at the venues? And the fountain is beautiful even from below. If you really want to see the fountain from off the ground, go up to the balcony of the Apple Store at the Dubai Mall.

Get there in advance. We arrived half an hour in advance and were let in early. In the daytime and evening it is better to arrive at least an hour in advance, as there is a line to the cash register and separately to the elevator. 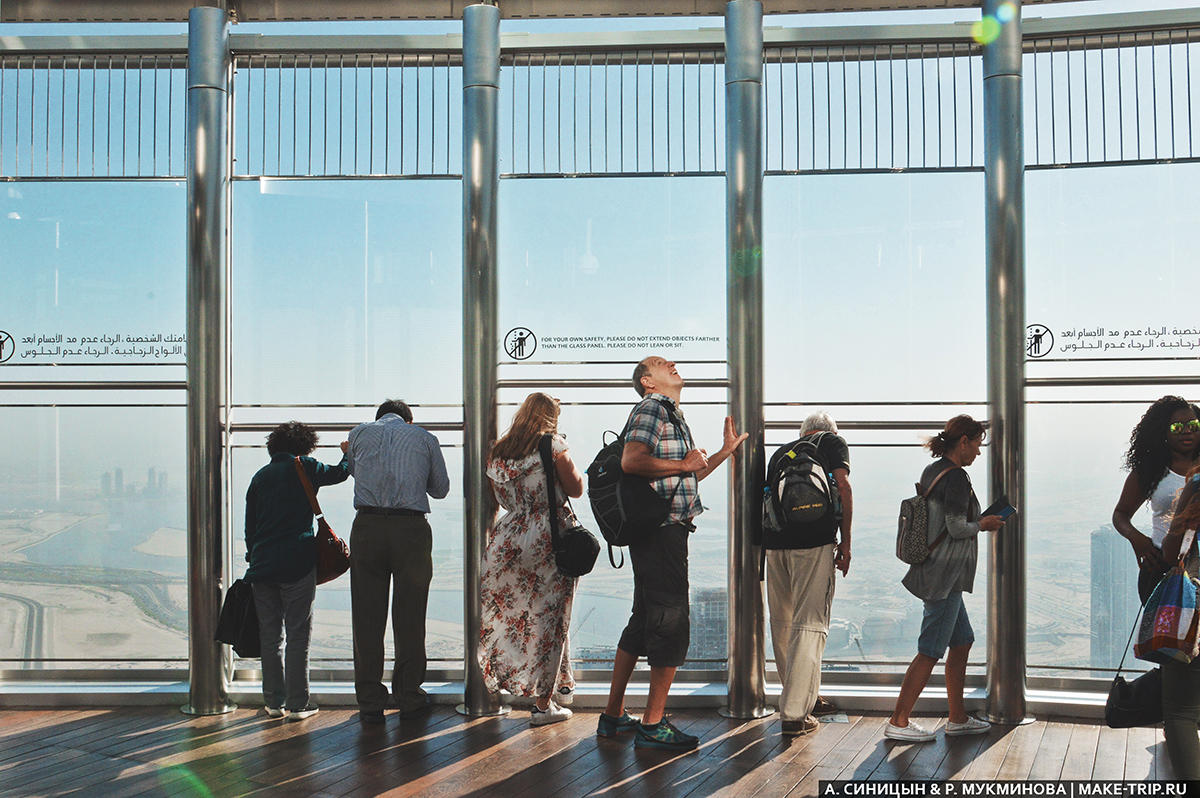 Outdoor observation deck on the 124th floor of the Burj Khalifa.

How to get to the Burj Khalifa in Dubai

There is a short line at the elevator and they start it with about 10 people. In one minute you will reach floor 124, where there is an open terrace with glazed walls. There is also an observation deck on the 125th floor, but closed. We were not on the 148th floor. 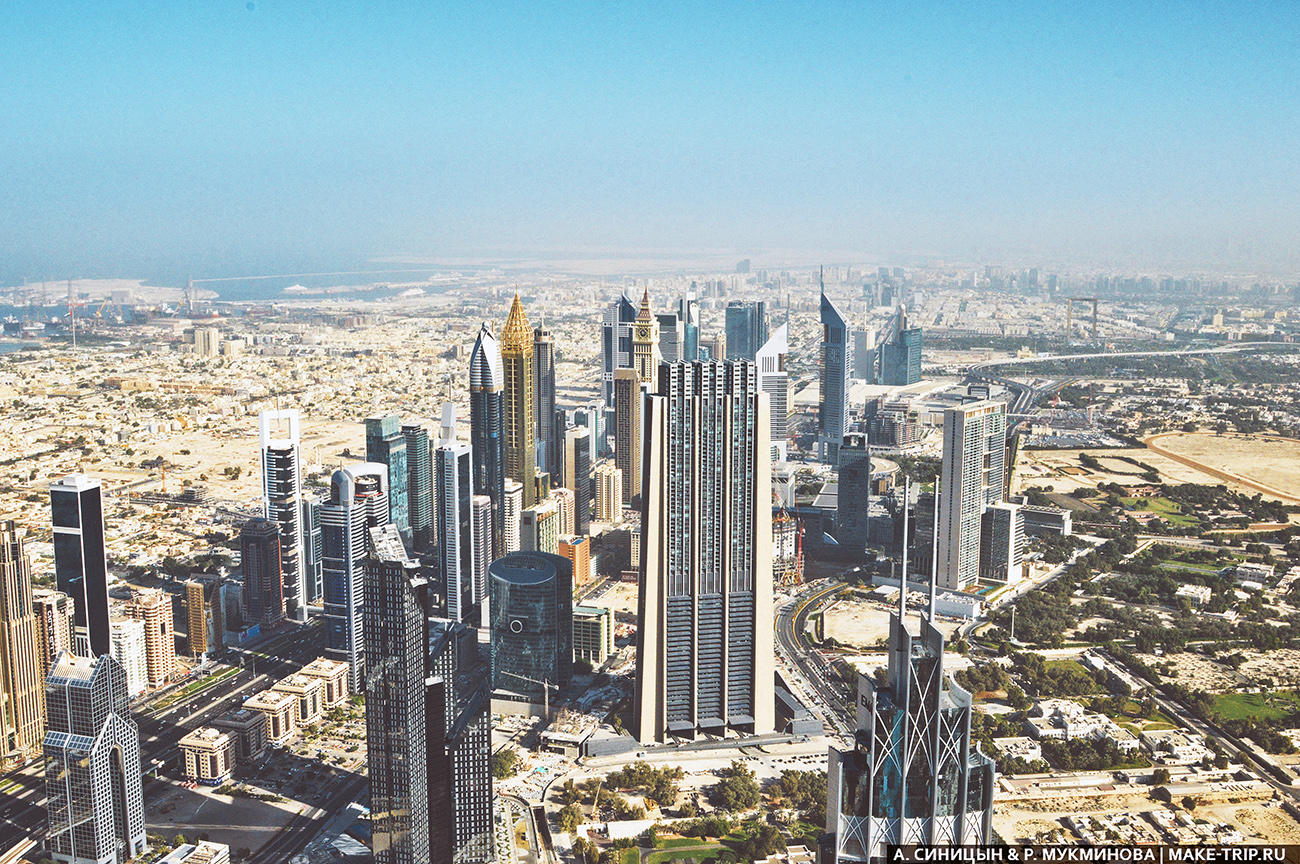 The view to the north from the observation deck on the 124th floor.

Hotel at the Burj Khalifa in Dubai

If you want to get chic, then stay at the 5-star (who would doubt it) Armani Hotel Dubai. It occupies 11 floors of a skyscraper. It has excellent reviews and a rating of 9 out of 10. A double standard costs only 35,000 rubles! You can buy a tour to this hotel on Level.Travel, and in order not to pay too much, learn 7 ways to buy a tour cheaper.

READ
UAE in July 2022. Where to relax, weather and reviews

Our review of the skyscraper

Is it worth to visit? Absolutely. It is expensive, but you will not regret it. It’s so tall that your neck starts to break when you look at it. To take a picture of the skyscraper, you have to get creative.

If you don’t like to be in the crowd, come early in the morning – we did. After 10am there is a haze and visibility is reduced. At sunset and at night is beautiful, but expensive and a lot of people. Someone in the reviews complained that the night view is inferior to the morning – the lights as the lights, the view is almost like a plane window.

Anton Ptushkin’s video tour of the rich life in Dubai:

Photo of the Burj Khalifa Tower in Dubai

The Burj Khalifa Tower in Dubai: At The Top viewpoint prices

Closed a very high gestalt: on our fourth trip to Dubai, the Burj Khalifa observation deck finally made it to our phone gallery.

We tell you in detail, from services where it’s best to buy tickets to names of places with great views of Dubai at night instead of the tower.

The Burj Khalifa in Dubai is the tallest building in the world. Plus, the tower has the tallest observation deck, restaurant and elevator. Everyone knows that.

But not everyone knows that a larger structure, Dubai Creek Tower, is also under construction there, which, according to the assurances, will bypass the skyscraper by 100 meters.

So have time while Burj Khalifa still holds the record!:)

READ
How to get from Dubai Airport to Downtown and Sharjah

Officially the Burj Khalifa observation deck is called At The Top. And in conjunction with the 148th floor – At The Top Sky.

Where do I buy tickets for Burj Khalifa?

View of the City and Singing Fountains from Above

To visit the Burj Khalifa tickets are booked online. You can also buy tickets on the spot at the ticket office, but they say the nearest time is only available in 5-7 days.

We bought standard tickets on the GetYourGuide website because:

Choose a time and how many people – enter name-mail-phone – pay – receive an email voucher, which must be printed out in advance and exchange at the box office for a ticket. Easy!

* up to and including 11 years old

What is the best time to go? 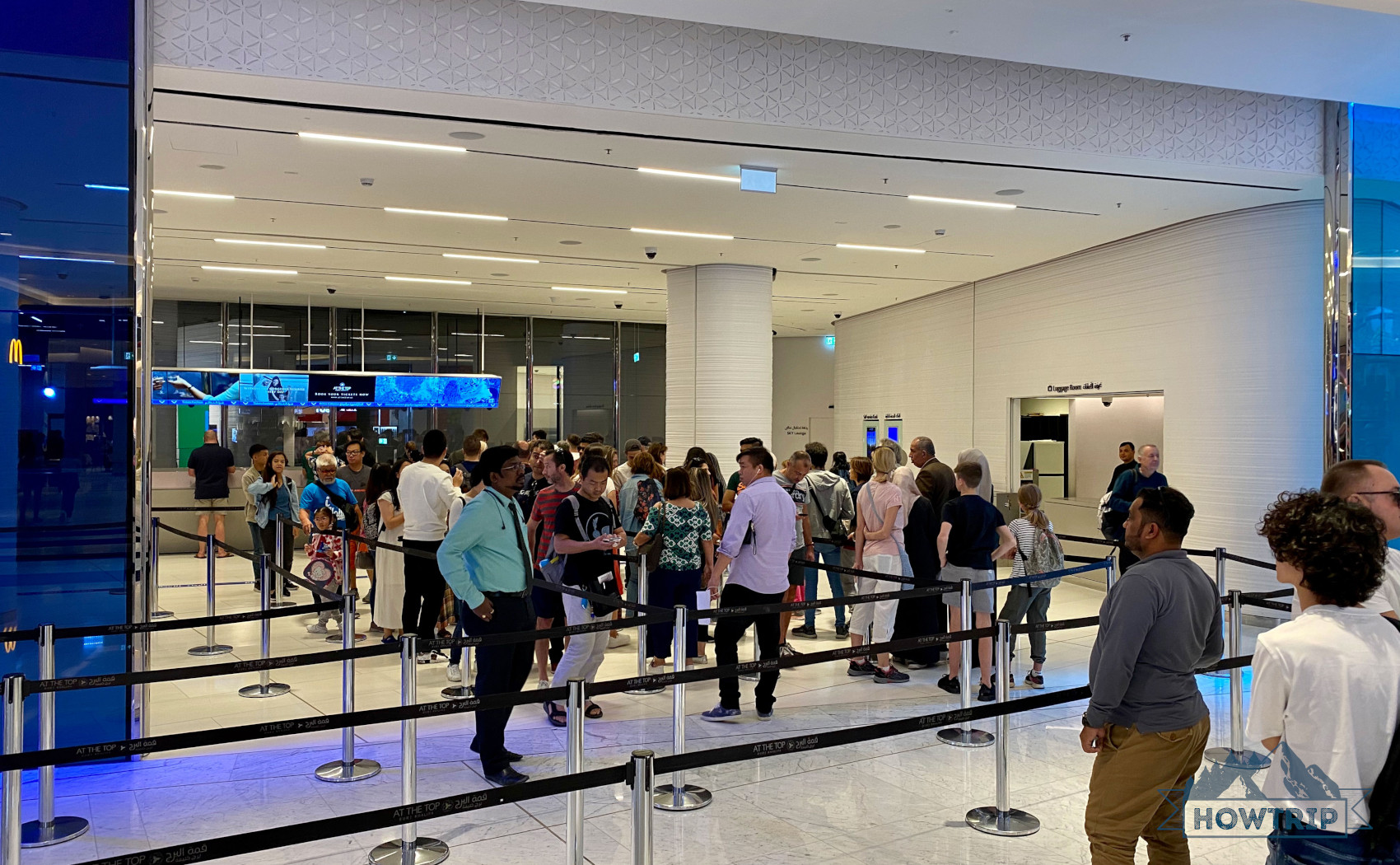 The lines at the box office are already at 10:00 – better arrive at the opening and get your tickets online

It makes sense that this is when there will be fewer people. The Burj Khalifa in Dubai is a hyper-popular attraction. The area on the observation deck is not much, and the number of Chinese wanting to take a photo (and not just one, but a whole series) – just za-shkah-li-vav-ing, even in the low season for the UAE.

Our ticket was for 9:00. We freely exchanged our voucher, passed the security check, and got up to the elevator-all without waiting. But at 10, when we went down, there was a big line at the ticket office and the elevator! The photo will be in the text. So if you read the reviews of tourists that the tower took three hours and two of them spent in line, there is some truth in it.

Going during the day or at night? If you do not want to overpay for the sunset (when you can see both sunny Dubai and evening with lights), choose daytime. And see the night Dubai from the open terrace in the bar Level 43 Sky Lounge – from 18:00 to 20:00 there is a happy hour, and the cocktail costs 35-50 dirhams! We did!

READ
Weather and temperature by month in UAE. When best to rest

How to get to the Burj Khalifa? 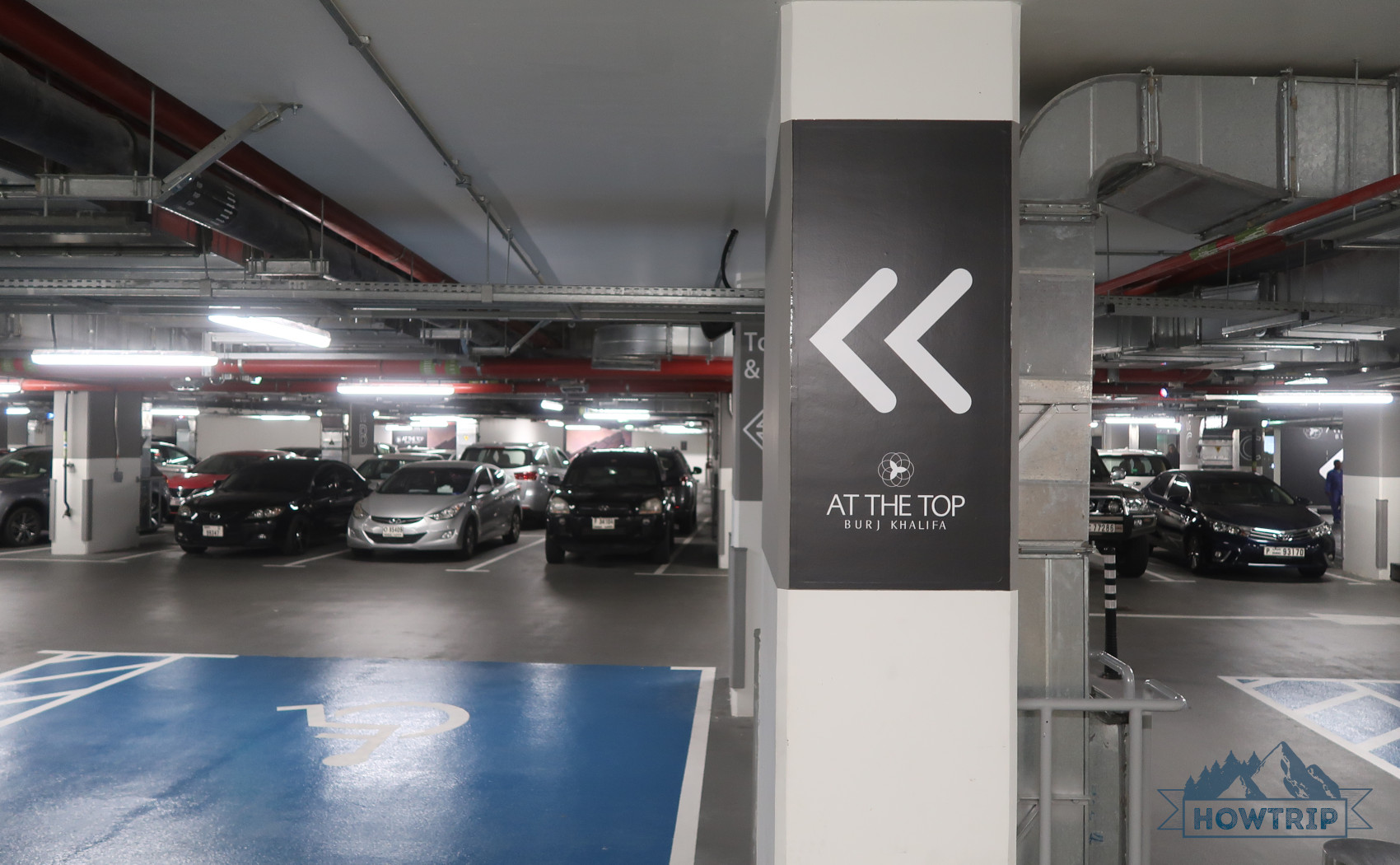 Use these signs to orient yourself when walking to the entrance of the site.

If you’re on the subway, the main landmark is the Burj Khalifa/Dubai Mall station.

Drive up and get off and there is a long, long, long walk to the mall itself, about 6-7 minutes at a brisk pace.

The whole way from the car to the ticket office took us ≈ 10 minutes at a brisk walking pace.

Well, if you take a cab, the cab driver knows exactly where the Burj Khalifa is.

Our review and tips for climbing the Burj Khalifa 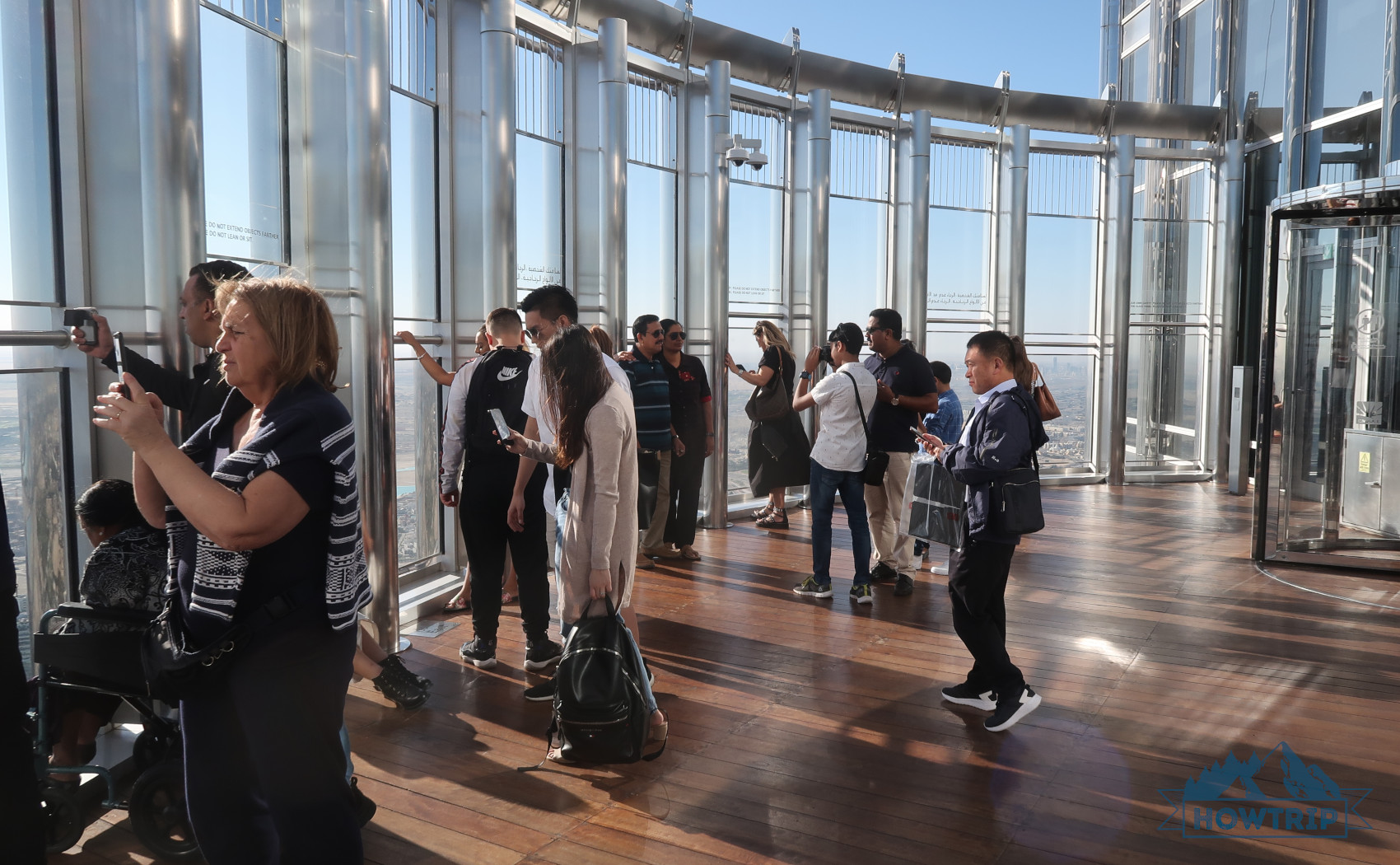 There are railings on the 124th floor at the observation deck, but there is an opening between the panes where you can neatly take a good photo

Our review of the Burj Khalifa: high:) There’s a desert around, of course, and a dozen skyscrapers, but if you’ve never been to this kind of observation deck, it’s worth a visit! To be honest, we were surprised that the observation deck in Dubai costs the same as Top Of The Rock in New York. So we decided that, given the excessive excitement, the price of climbing the Burj Khalifa justifies itself only in the morning.

What else can we recommend? 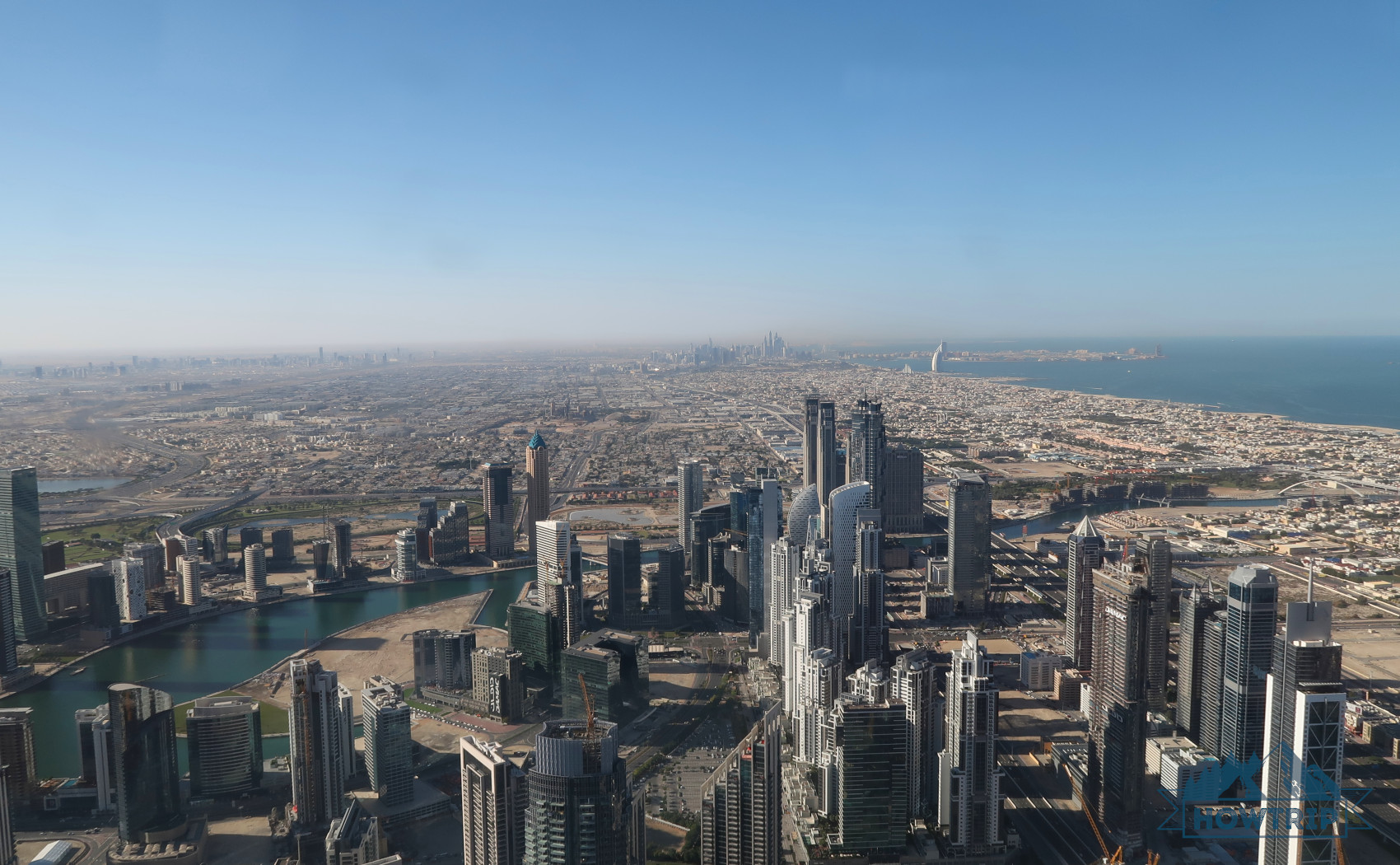 And get useful information about the United Arab Emirates in our collection of texts:

What other excursions have we visited in Dubai?

What else is there to do in Dubai besides sightseeing? The sights are limited, and the city is not suitable for walking. So you calculate: a day for the beach, a day for Burj Khalifa and Dubai Mall, a day for Dubai Marina, and then?

Our entertainment program came out as follows (links lead to the sites where we took excursions – where we were looking for a better deal):

By the way, a customized tour for 3-5-7 people – and, in any country and in Russian – can be picked up on Tripster. This time it was just the two of us, so no personal guides.

Video from our blog

We made a video for 6 minutes about the visit of the tower – with beautiful views and relevant information:)

There are videos on our YouTube channel about other “Dubai” topics (prices, beaches, and an overview), and about other countries (Turkey, Montenegro, USA).

Pictures from the Burj Khalifa 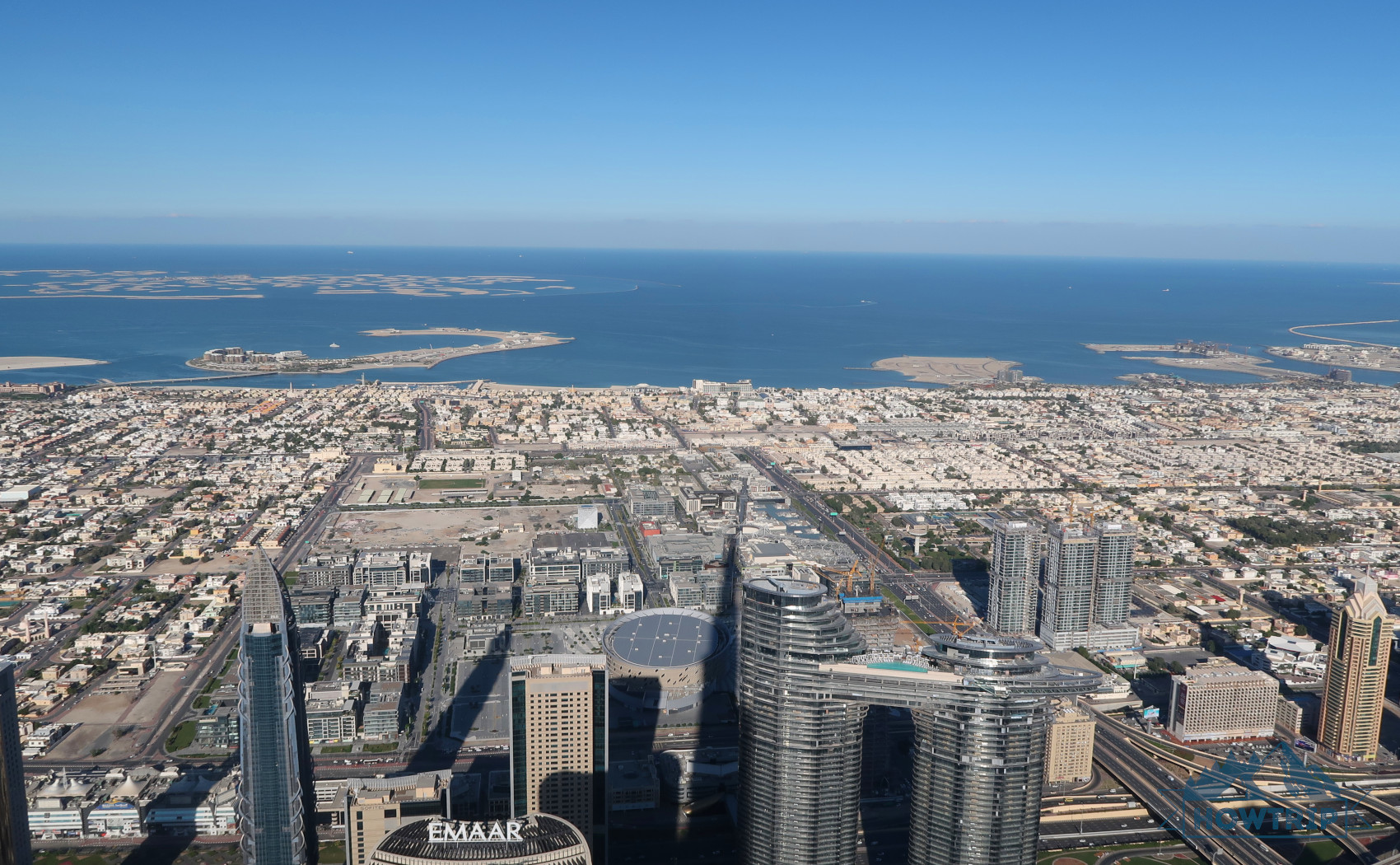 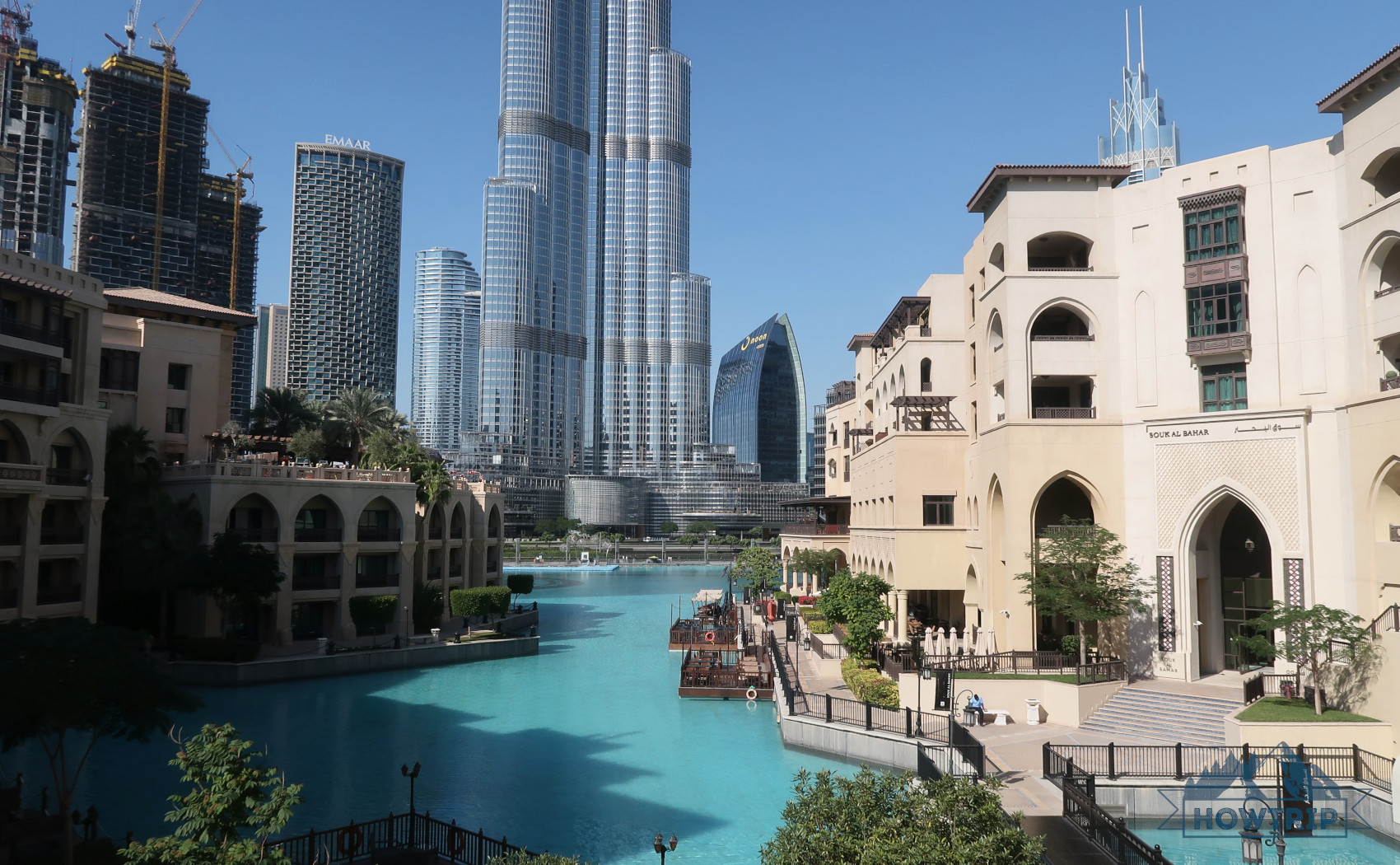 Copying of materials is allowed only with a direct, active and open to indexing hyperlink to howtrip.ru.