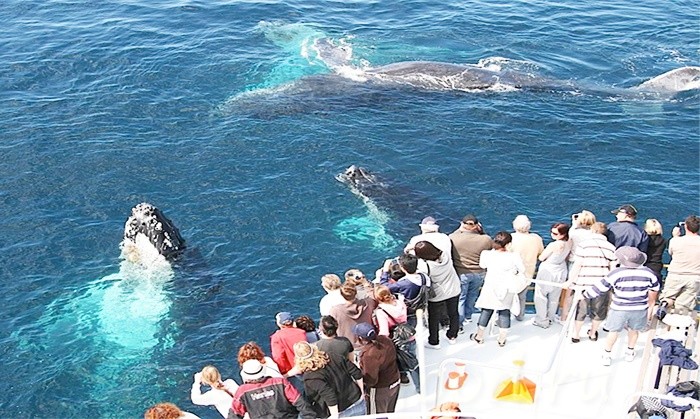 Whales in Sri Lanka are one of the most impressive attractions on the island. The town of Mirissa is the main mammal migration observation point. Read an in-depth review of the whale safari, observation season and tourist reviews.

Tropics, beach, white sand and coconut palms is already an attractive and beautiful picture in itself that can be seen daily on the shores of the Indian Ocean in Sri Lanka. Is this enough to make your vacation enjoyable? Absolutely! Every day on the island is an amazing adventure that will be remembered for a long time. However, Sri Lanka is in a position to offer and activities that will leave a lasting, vivid impression for a lifetime, one of them – watching blue whales!

A trip into the open ocean, miles of water and meeting the largest mammal on our planet, the blue whale, this is what can really impress!

“A pleasure not for everyone,” as a guest of our website says, “It’s hard to watch whales for five hours when you’re seasick and all you want to do is feel the shore and ‘get firmly on your feet’ as soon as possible.”

Blue whale – wikipedia. What you can see during a safari

Wikipedia says that the blue whale (aka blue whale or blue striped whale) is the largest animal that exists in the world today. And there is a possibility that this “record” has never been broken, i.e. no larger animal has ever existed on our planet! The blue whale weighs about 150 tons (and can be measurably higher) and is about 33 meters long. 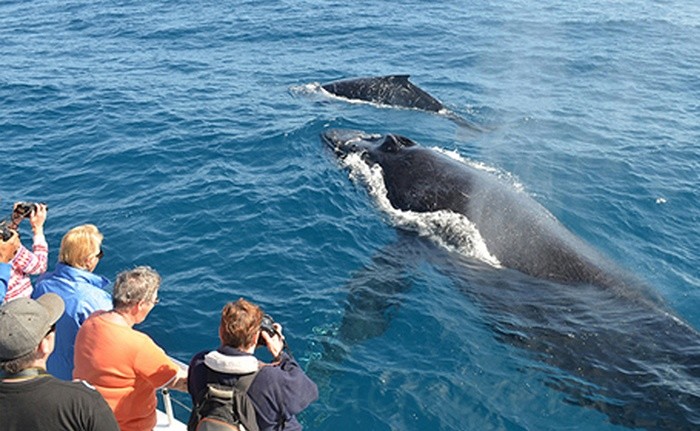 Incredibly large, massive, beautiful, yet harmless to humans sea animal. Despite its size, the blue whale feeds on plankton. A whale safari in Sri Lanka allows you to watch this process as a flock of whales in the open ocean move underwater, eating krill while surfacing periodically to draw air into their lungs.

In addition to blue striped whales on the boat you can see packs of dolphins, as well as sperm whales, fin whales and other representatives of cetaceans – about 26 species live near the coast of Sri Lanka, some of them can be watched during the safari.

Whale Safaris and Swimming with Whales, Where to See Them

You can see blue striped whales in Mirissa (near Hikkaduwa, Galle, Matara), in Kalpitiya (upper island, 135 km from Negombo) as well as in Trincomalee and Batticaloa. 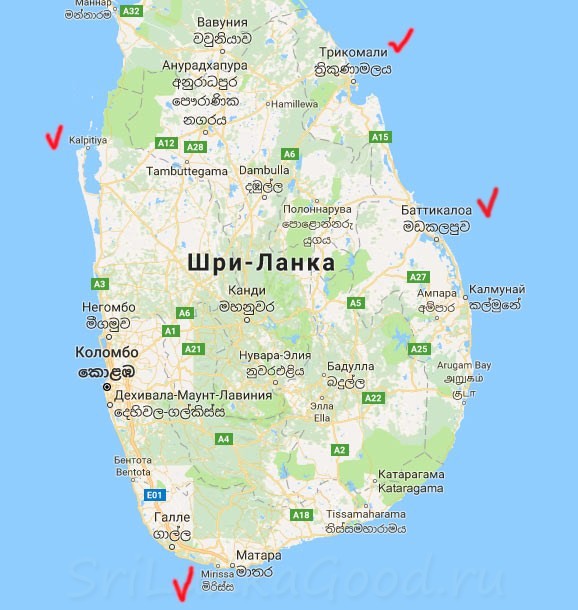 Swimming with whales in Sri Lanka is a kind of chase. Several tourist boats go out into the ocean and move in different directions. The boats echo each other, relaying information about whale sightings. As soon as one boat spots a “fish” in the water, all the water safari hunters immediately head for the designated route. Such searches sometimes take several hours. A lot depends on chance and luck.

The sea departure starts early in the morning (from 6-8 a.m.), although there are companies offering the trip in the afternoon, when the sun is brighter and there are fewer boats on the water.

The duration of the safari is 3 to 8 hours!

In sunny weather there is every chance to see the giant mammals and get to know them better. While the boat is moving there may be flocks of dolphins, large turtles, sperm whales.

Price: the cost of the excursion

Prices vary depending on the location of the tour: Mirissa, Kalpitiya, Trincomalee or Batticaloa. Also the cost is different in competing companies located in the same resort, regardless of the service and entertainment program.

Approximate price of a whale safari in Sri Lanka: from 2000 rupees to 8000 rupees. In this case, the service can be at the same level. Moreover, there is no guarantee that you will see 100% of the whales. Sometimes there are reviews in which travelers claim that after 5-6 hours of observation, they never saw whales.

Minuses and pluses, what to expect?

Whale watching season depends on the time of year. In the summertime it is the east coast: Trincomalee and Batticaloa. In fall, winter and early spring it is west of Ceylon: Kalpitiya and Mirissa.

Mirissa is most popular with tourists.

During the whale migration period, the mammals’ path runs from the African continent to Sri Lanka and India, whose shores are washed by the Bay of Bengal. Therefore, it is possible to witness the movement of blue striped whales from various points (resorts on the island). The whales move at a distance of 5-10 km from the shore and locals and tourists can easily watch the action on the deck of a small boat.

Were you on a whale safari? What were your impressions, did you manage to see whales up close? How was your “boat trip”? Leave your feedback in the comments, to help other travellers plan their holidays and tours!

A frequent question from site subscribers is, can I see whales in Hikkaduwa?

How to see whales in Sri Lanka 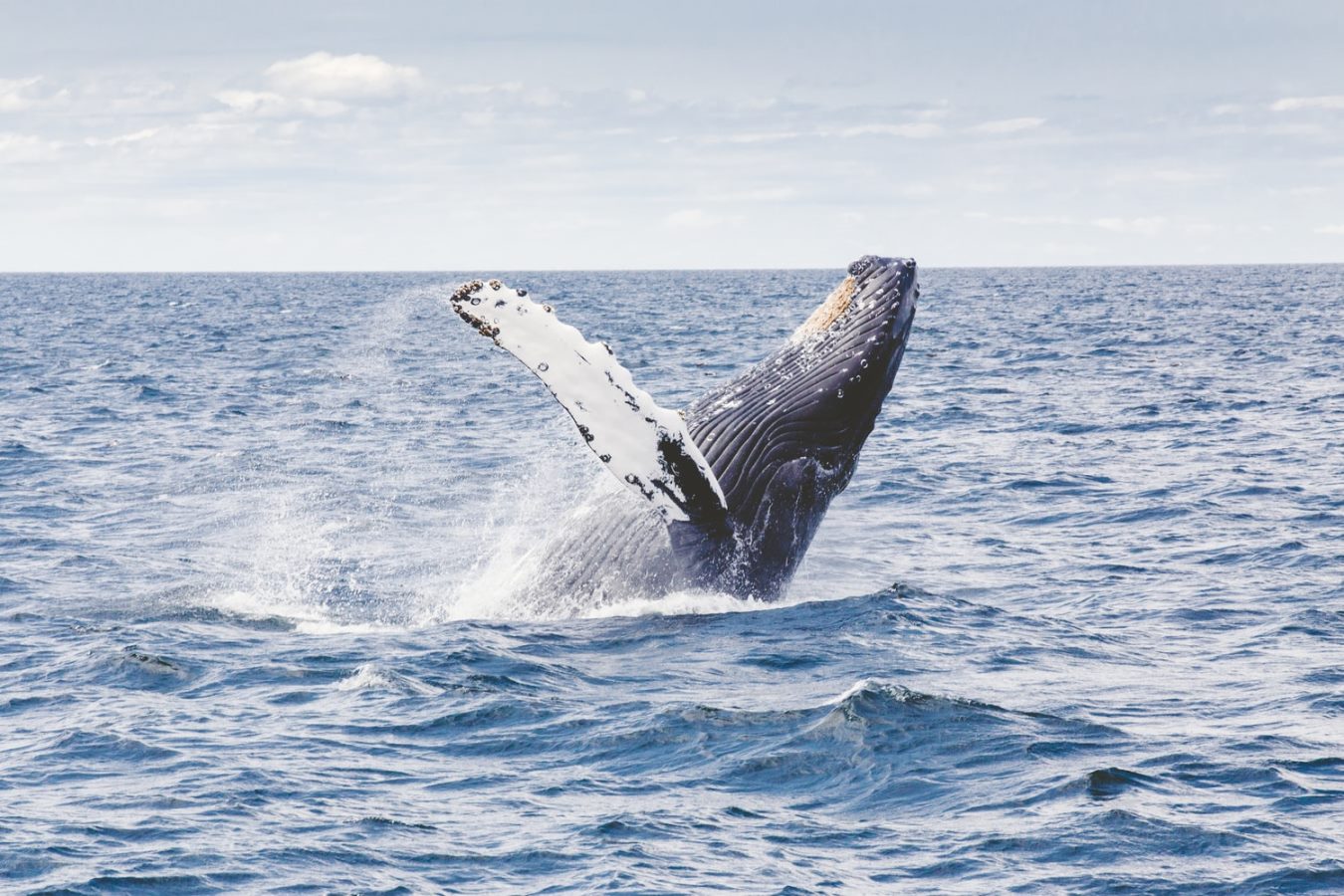 “The fins beat the wave and go deep.” Learn how to swim to blue whales in Sri Lanka, how much a whale safari costs, where to buy a tour and what you need to know. Read our review!

Whale hunting used to be a commercial hunt, now it’s a tourist hunt. We really wanted to see these huge and kind animals, so we went to Mirissa – it is considered one of the best places to watch blue whales in Sri Lanka and in the world in general. We were there in March.

Look for hotels in Sri Lanka on Rumguru – there you can find options with discounts.

Where to buy a safari tour in Mirissa

Whale safaris in Mirissa are offered by many companies and hotels. But the #1 company on TripAdvisor is Whale Watching Club Mirissa . They have rave reviews, read it for yourself. Plus our acquaintances were already sailing with them, so we chose them too.

The WWC has plenty of advantages:

We are completely satisfied with their excursion. 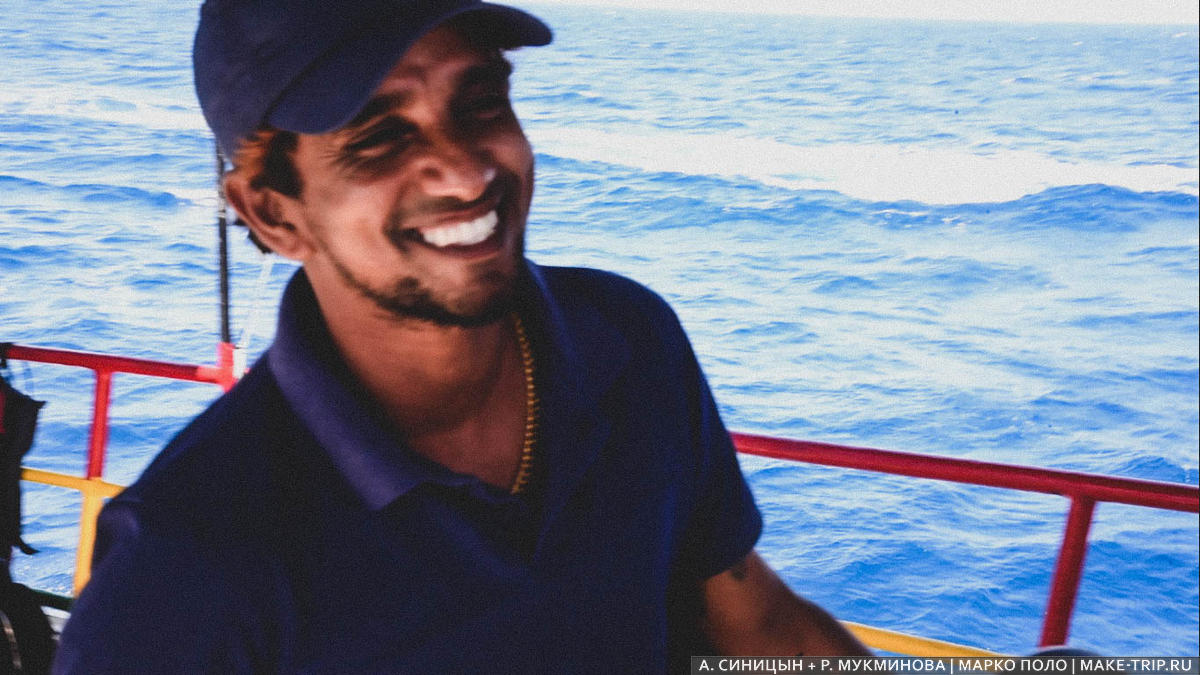 The captain, our captain!

How much is the excursion 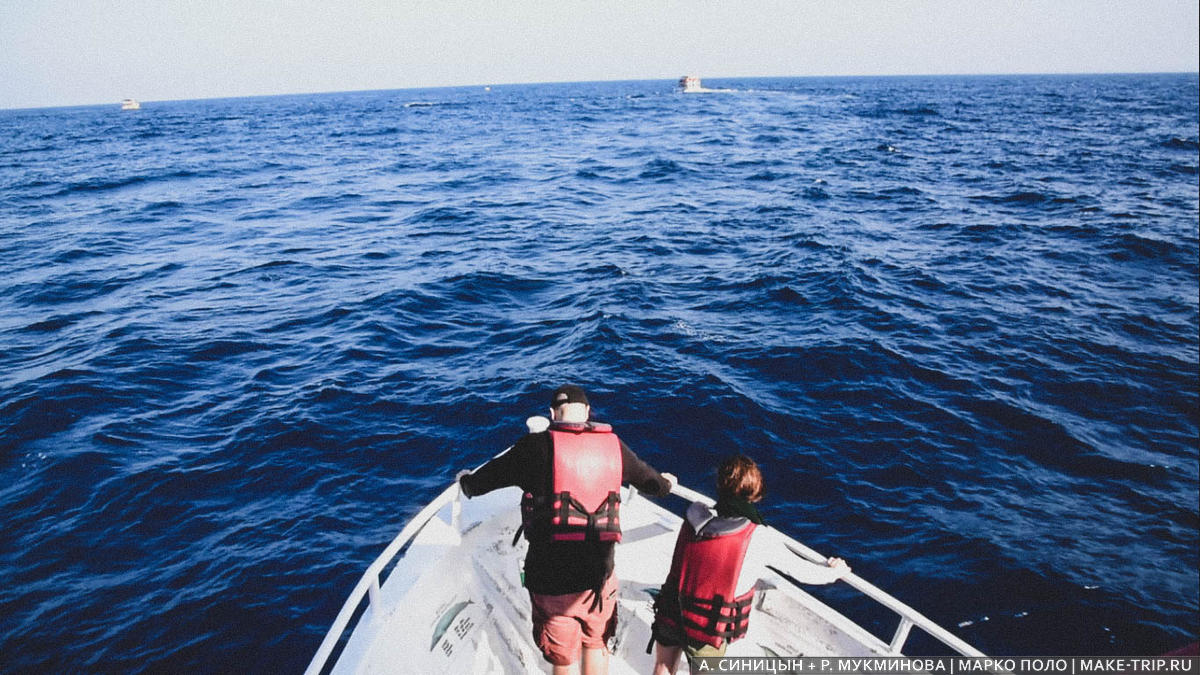 Our ship and other excursion boats ahead. On the upper deck, the view seems to us to be better.

How the safari goes.

If you live in Mirissa, a tuk-tuk will pick you up for free from your hotel. The driver was waiting for us at the gate at 5:30. At the office we checked in and had tea. Then an employee takes passengers to the ship in small groups – the earlier you arrive, the earlier you get on board.

At 6:00, the departure time. We were the first to cast off. Almost immediately they bring breakfast – a sandwich with an egg, lettuce, sausage, a slice of pineapple and a 0.5 liter bottle of water. Then they serve watermelons and pineapple. On the way back they give a roti, a bottle of Coke and a coconut.

We saw the first whale very early – he waved his tail at us. This is amazing! It’s very hard to imagine such a megalomaniac underwater. Mostly there is a small species of blue whale – you can recognize it by the notch on the tail. 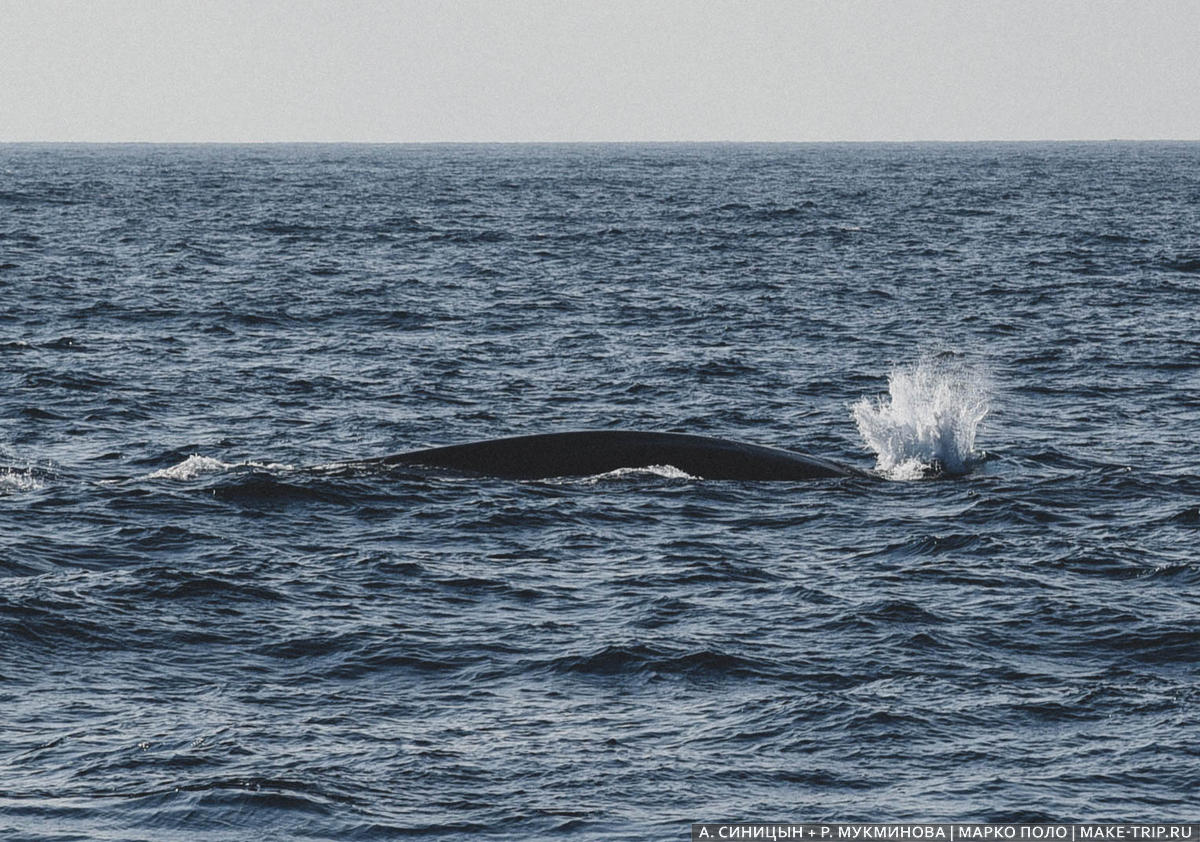 You will see enough of whale’s backs.

We got to the main whale location at about 9:00. “The captain looks out. He sees a fountain gushing into the sea.” The whale breathes, a fountain of spray rises into the air several times. Then the race begins: all the ships and boats rush toward the whale. Then the whale goes under the water for 10-20 minutes. During this time, the captain tries to predict the whale’s trajectory and swim to the place where it will swim next time. He enjoys each whale like a child – much more than the rocking-weary tourists. You can’t help charging with his energy, cheerfulness and excitement!

READ
Food in Sri Lanka is a pain! Prices and Tips 2022

We saw a lot of whales – we lost count. On the way back we met an amusing sea turtle – it posed for a long time and mischievously looked at the tourists. Then there was an invasion of miniature spinner dolphins. More than a hundred graceful dolphins were hunting, jumping out of the water right in front of the boat. There were so many that the water seemed to be bubbling. That’s where the excitement was!

At about 11:00 we arrived at the port. It was a little sad to go back, we wanted to spend more time at sea. 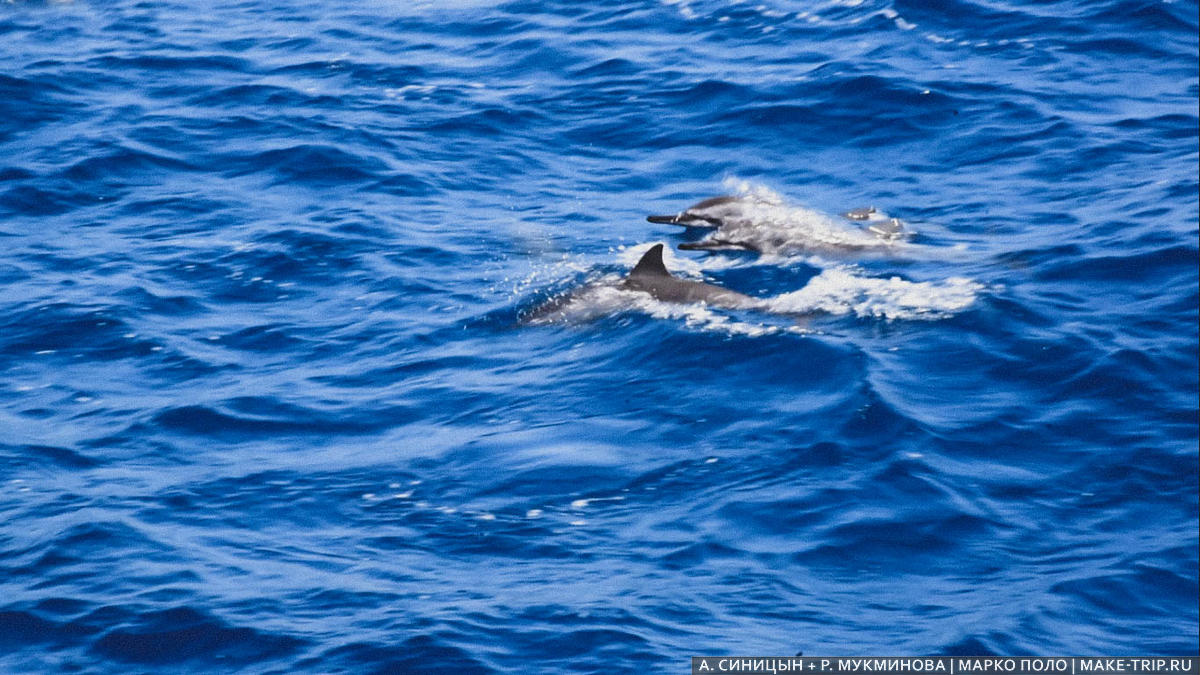 The dolphins we had seen on the whale safari.

You have to understand that whales don’t swim close or jump out of the water. Mostly you’ll see a “geyser,” a whale’s back and, if you’re lucky, a tail. But even this is enough to appreciate the size and to be impressed – especially if the whale is very close.

Dolphins, on the other hand, gracefully jump out and swim merrily racing the boat. A turtle also doesn’t mind swimming nearby.

There will be a lot of rocking, sometimes so much that the stomach wants to jump out. There will be wind and sun in the face, salt spray, whales sighing and snorting! 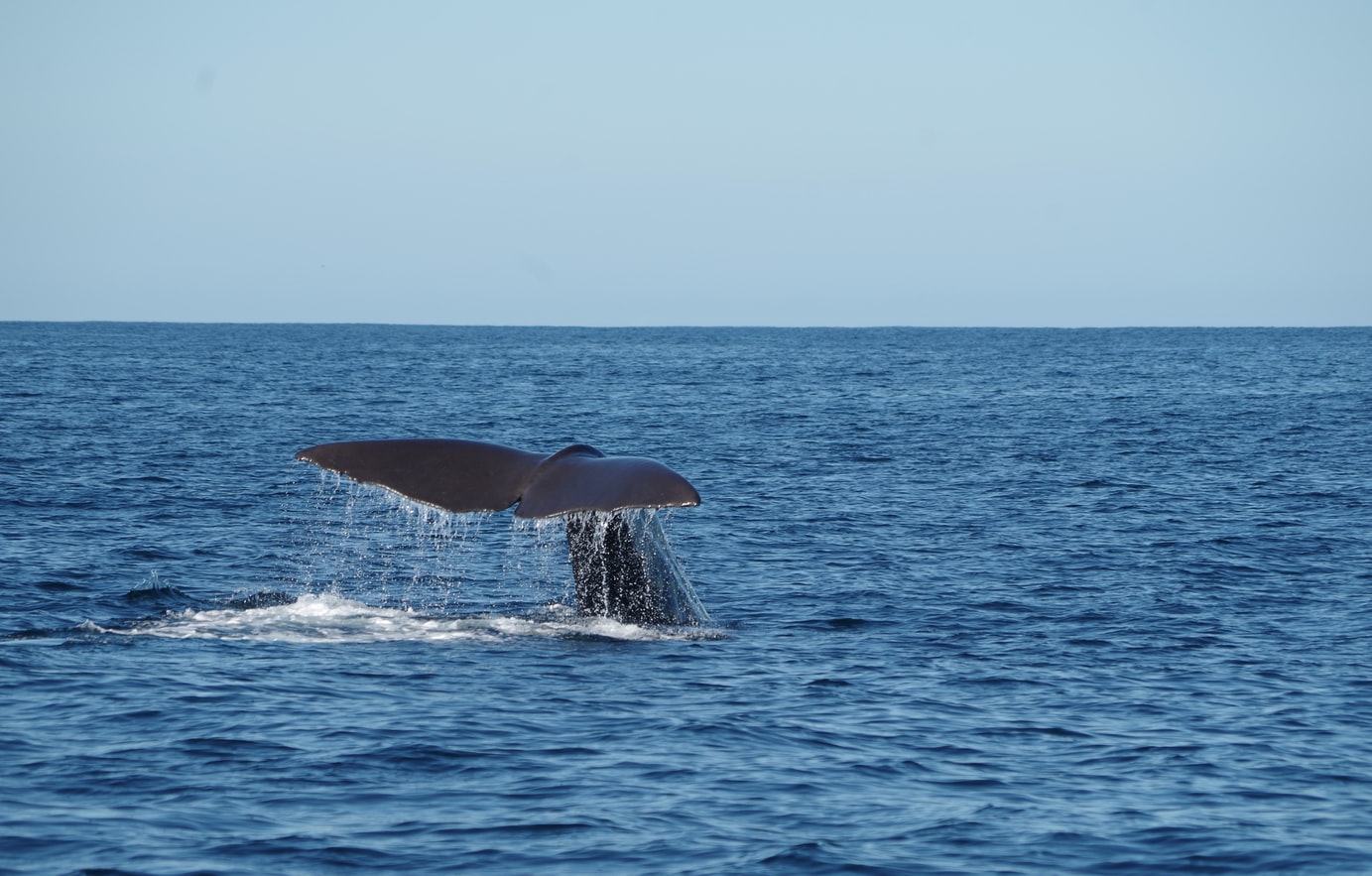 The limit of dreams is to see a whale tail. If you are lucky, you will see it a couple of times during the tour. Photo: Davide Dalfovo / unsplash.com.

Go on safari without high expectations – you may not see whales. If you don’t see them, WWC offers to go on safari again for free the next day. No refunds.

Book your excursion in advance. Contact the guys by mail or Facebook – there are contacts on their website at whalewatchingclub.com. They’ll notify you of any changes, if any. For example, our tour was rescheduled by one day.

We sat on the upper deck – probably the best places to see whales. You can see everything well from the top. Try to get there early to get to the top, or ask the staff to do so.

If you’re seasick (and even if you’re not), take a pill an hour before you set sail. There can be big waves in the open ocean. If anything, the staff has special packets. We were lucky – the waves were small and only one person got seasick.

It is best not to have a big breakfast and drink a lot of water so you don’t get seasick.

On board be careful – the rocking is strong, you can fall, hit or drop equipment.

Sri Lanka 0
Benetota – reviews by tourists Reviews about Bentota, based on personal experience. Pros and

Sri Lanka 0
Sri Lanka, Unawatuna – Reviews Unawatuna is one of the most famous and popular

Sri Lanka 0
Sri Lanka in January: weather, beaches and resorts. Where to go? How nice to

Sri Lanka 0
How we went on a $35 safari in Sri Lanka National Geographic in Lankan: