How to get from New Istanbul Airport

The distance from New Istanbul Airport to Taksim District is 44 km, to Kadıköy District is 55 km, to Sultanahmet is 46 km and to Usküdar is 47 km. Opened in 2019 – hence the name – the airport has become the largest in Turkey. Flights from Ataturk Airport were transferred here, and now together with Sabiha Gokcen Airport they serve the tourist center of the country – Istanbul.

Numerous buses provide connections to the city. Only some go to popular districts – Taksim, Sultanahmet, Besiktas. Basically, the buses can take you to some transfer point.

The New Istanbul Airport does not yet have its own subway station. The line is scheduled to be completed at the end of 2022.

Among the alternative means of transportation are cabs and rented cars.

Further in the article we will consider the available modes of transport. Using the links, you can make your own route. 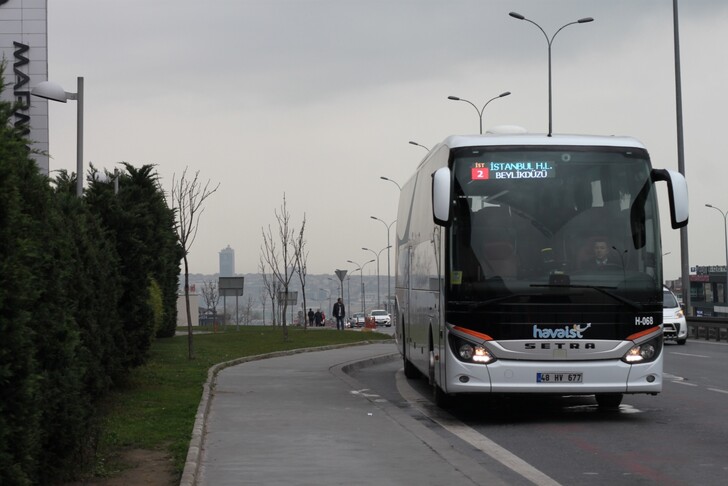 As of May 2022, the following routes are served (links – list of stops, scheme on the map, schedule, you need to select the point of arrival):

As you can see, İST-5, İST-14 buses go to the central districts.

Havaist has a mobile app, where all current information on the listed flights is available.

Boarding and disembarking of passengers is strictly at the stops provided by the route. The interval of movement is from 15 minutes to 1 hour, depending on the direction and time of day. On average, buses run every 30 minutes during the day (at night the interval is extended).

Bus departure is at -1 floor.

Fare payment is by bank card (at the driver) and Istanbulkart card (validator at the entrance). There is a cash ticket office at the airport. Children under 6 years of age ride free of charge, without a separate seat.

Read more about Istanbulkart and the Istanbul public transport system in detail in this special report. 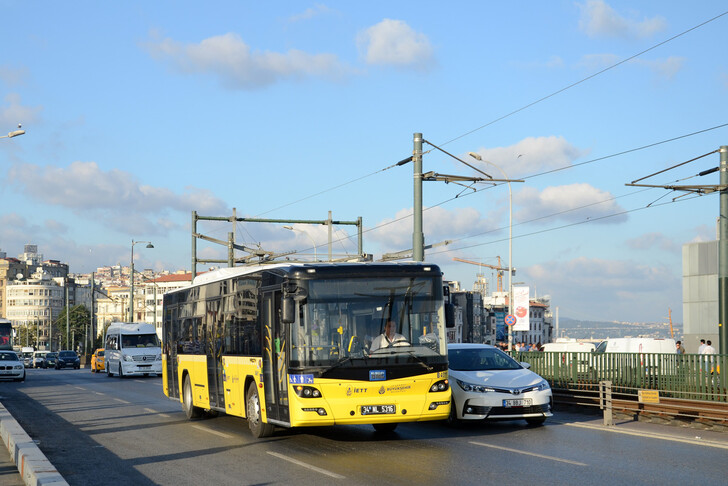 İETT municipal buses differ in that they make more intermediate stops along the way and do not serve central (tourist) areas. You can usually take them to a transfer point such as the Marmaray subway or train station. With the change will get you to the desired point.

Below is a list of city buses from Istanbul New Airport.

The fare is 7.67 TL (double fare on Istanbulkart).

Making a route from Istanbul New Airport to the center, piers, subway and Marmaray train stations, to the Asian part as well as to any of the desired neighborhoods is possible through a special planner from İETT.

With the help of this transport you can reach any area in the city 24/7. There are three types of cabs available for order – orange “C” (economy), blue “D” (comfort), black “E” (premium).

Parking is located on the level of departures (2nd floor), as well as in front of the exits from the passenger terminals of domestic and international airlines.

Fares are paid according to the meter per kilometer + boarding. So, the trip to Sultanahmet will cost about 130 liras. You have to spend about 1 hour on the road. There are toll roads in Istanbul and one should take it into account when planning a trip.

You can call a car through a mobile app – Uber or BiTaksi.

Ordering a transfer in advance will save you all the trouble. Requests for a car and payment is made online. In this case, the price is fixed and will not change, even if there are traffic jams on the way or have to go around due to an accident on the road. Cars are available for individual tourists and organized groups.

You can get from the new Istanbul Airport to the city center by bus, cab, or rented car. An M11 subway station is planned to open at the airport in 2022.

The distance from the new Istanbul Airport is about 40 km. This is roughly the route you will have to take.

This article is intended for those who plan to live in Fatih district and its neighborhoods Sultanahmet, Laleli, Aksaray, Gulhane, Sirkeji, Eminenu, Kumkapi. If you need to go to Taksim, Beyoglu, Beşiktaş, Şişli, read this article.

The area described in the article with hotels is shown below. By the way, if you have not yet booked a hotel, it makes sense to do it on Booking.com, there is the largest selection for all tastes and wallets. Service proven time.

Attention! Due to the introduction of daytime closures of Ordu Cd. between 10:00-21:00, the final stop of the bus HVIST-12 is at the Aksaray metro station. The HVIST-12 bus stop on the way from the airport is marked below.

For the way back to the airport, the stop at Beyazit Square will be available from 21:00 – 09:45. Check the bus schedule. 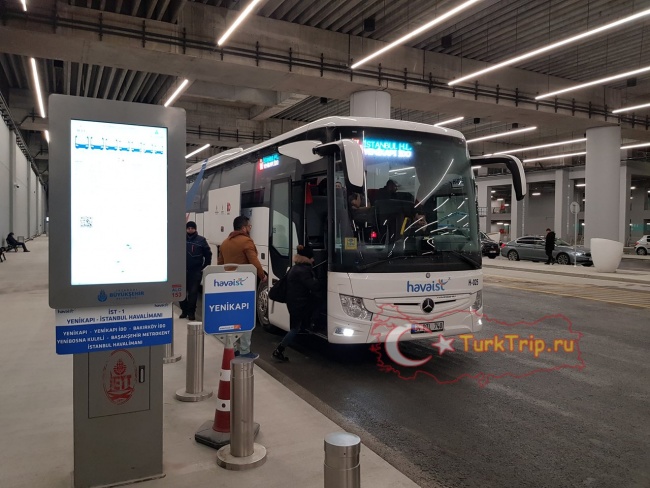 Below is a portion of the HVIST-12 bus route with stops (top-down): Nurtepe-Vi̇yadük – Ayvansaray – Ulubatli – Aksaray – Beyazıt Meydan. 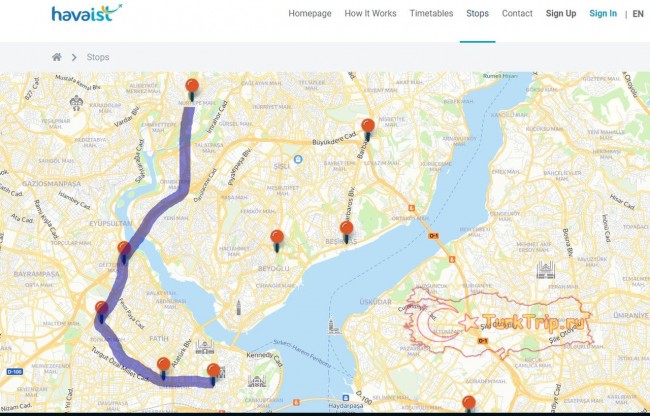 See the Havaist website for interactive bus stops and schedules.

Similarly, you can take a streetcar to the Gulhane, Sirkeci, and Eminenu neighborhoods.

The fare on the HVIST-12 bus is 52 lira. Payment is possible by bank card (not issued in Russia), cash or by QR-code from the account in the mobile app Havaist (we do not recommend this method). Istambulkart is not accepted (you may need it to go by streetcar). Keep in mind that cash is not accepted by the drivers themselves, at the airport tickets are sold at kiosks near the platform, and the company employees are on duty at stops.

Travel time to the final stop is 50-90 minutes, depending on traffic. Buses run 24 hours a day. Read more about Havaist buses in this article.

If your goal is to save as much as possible despite the travel time, you can take the H-2 bus.

The terminus of the bus is near the metro station Şişli. This is the subway line M-2, you can take it to Vezneciler station and then take the express streetcar to Sultanahmet. You can also get off at Yenikapi or Haliç stations, depending on the location of your hotel.

READ
How much does it cost to go on vacation to Turkey. Our spending and prices 2022.

The bus fare is 8 liras. To use all the public transport described above you need Istanbulkart. The whole way to Sultanahmet in this case will cost 8 (H-2 bus) + 2,9 (M2 metro) + 2,2 (streetcar) = 13,1 lira (December 2021). This cost is due to the fact that there is a discount on Istanbulkart transfers for 2 hours.

For the itinerary and all bus information, see this website.

All popular car rental companies are available at Istanbul Airport:

Read more about car rental. Keep in mind, it’s much better to rent a car in advance (2-3 months in advance).

The fastest way to get from Istanbul Airport to the city center is by cab. It takes about 40-50 minutes to get to Sultanahmet without traffic jams. Cars are available in plenty on the first floor. Pay by the meter. The cost of a cab is about 200 liras.

You can also order a transfer online at a fixed cost. Then you will be met with a sign and taken to the pre-agreed address. Children will be provided with the required number of child seats. This option is especially interesting for groups of people, as you can order vehicles of different capacities.