How to get to the Simferopol airport

The distance from the center of Simferopol to the international airport is about 20 km. You can get there by buses and trolleybuses with or without changes. You can also always take a cab.

After the opening of the renovated terminal Simferopol Airport has become an important transport hub of Crimea, so it is not surprising that it has its own bus station, from which regularly – especially during the season – buses go to Yalta, Evpatoria, Feodosia and other resort spots.

In 2019 functioned Fly&Bus multimodal transportation service – organized transfer from Sevastopol, Yalta, Yevpatoria, Alushta, Sudak, Feodosia to the airport. The departure time was coincided with the departure time. To find out if the service will be available in 2022-2023, you can check in his group VKontakte.

Next, we will consider in more detail how to get to the new Simferopol airport from other transportation facilities of the city, as well as from popular seaside resorts.

How to get to the Simferopol airport from the railway

The city train station is located at a distance of 16 km, which can be overcome by public transport. Boarding is at a stop 200 meters from the station. Here is how it looks on panorama from Yandex:

Bus number 49 . A direct bus route that goes from the Maryino neighborhood through the station to Simferopol Airport. 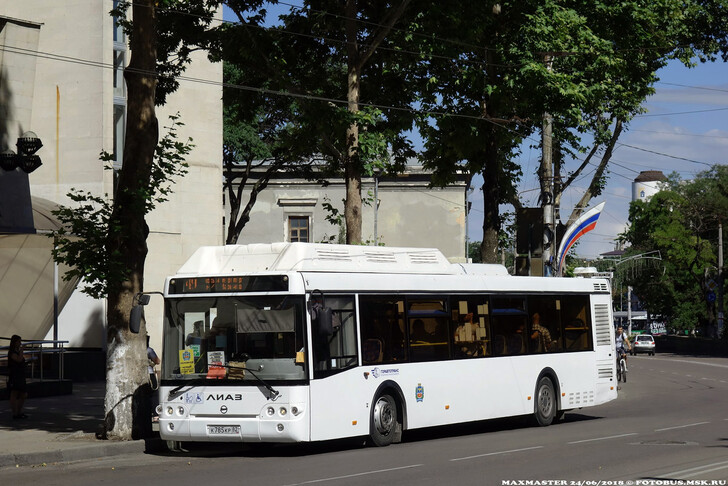 Bus number 49A. This is a direct night (!) route. The place of landing – a stop near the railway station of Simferopol, the end – near the new airport terminal.

The bus goes by Evpatoria, Zelenaya streets, stopping at the points provided by the route.

The transport runs only during the vacation season daily from 23:00 to 05:00. The departure every 30 minutes. 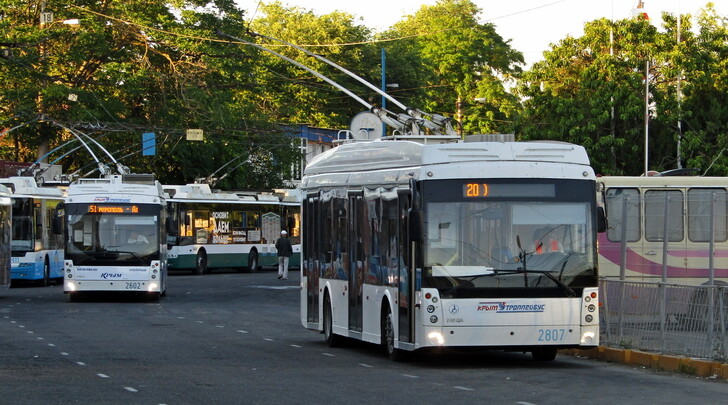 Trolleybus № 20 . It is an express route without intermediate stops. The first trip departs from the bus stop near the bus station “Kurortnaya” at 06:00, the last one – at 23:00. The interval of movement – every 20 minutes to 1 hour.

READ
Truth about Alupka. Reviews about rest and prices - 2022

At the stretch from the array “Aeroflotsky” to the new airport contact network is not provided, and the transport moves on autonomous running.

The carrier is “Krymtrolleybus”. The rolling stock on the route is new, equipped with ramps and elevators for physically challenged people, there is Wi-Fi, an information board.

The cost of tickets – 20-25 rubles. From June 2020 you will be able to pay by contactless plastic card (MIR, Visa and MasterCard) on some city trolleybus routes.

The capital of Crimea has one Central bus station and three bus stations. The most popular of them is “Kurortnaya”, which is located near the railway station. So everything written above is also relevant for those passengers who are interested in this particular bus station.

By the way, if you need to get to the airport from a nearby resort, do not necessarily have to change: there are direct bus services from local bus stations and bus stations.

To learn more about bus connections between Simferopol airport and the South Coast resorts, read this article.

From the central bus station to the airport you can take a bus number 49, which has already been mentioned above.

Cab to the Simferopol Airport

This way of transportation is convenient in every way. The fares are fixed and calculated based on the distance and the availability of additional services (child seat, the carriage of a pet, the number of intermediate addresses). The cost from Simferopol – from 700 rubles, from Alushta, Evpatoria – from 1 500 rubles, Yalta, Sevastopol – from 2 200 rubles (order).

You can also pick up the car by calling one of the local taxi services. Take into consideration that the demand is high during the peak hours, and the free cars are few or none at all.

A more reliable option is to order a transfer in advance by paying online. The car will be served at a specified time at the right address, whether it is a hotel, a house in the private sector or some shopping center. The driver, if necessary, will help with the luggage and carefully deliver to the new terminal.

Transfer options from KiwiTaxi which works with trusted carriers.

Simferopol Airport: how to get there 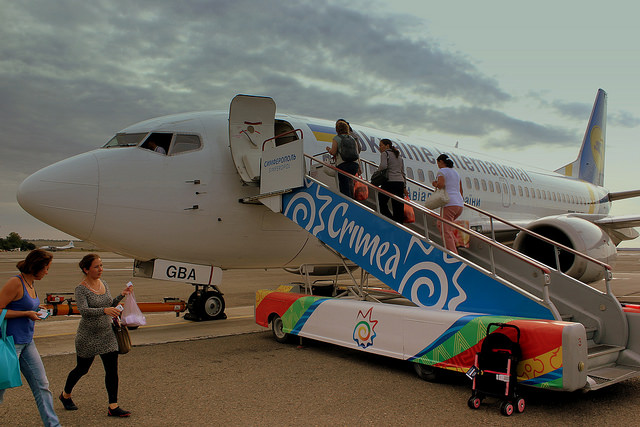 A detailed breakdown of how to get from Simferopol Airport to the city center, as well as to other Crimean resort towns: Yalta, Alushta, Evpatoria, Feodosia and Sevastopol.

In Simferopol built a new airport – beautiful and modern. It is recognized as the best regional airport in terms of service and comfort and won SKY TRAVEL AWARDS. We visited the airport and agree with the award – the terminal building is full of sun and air and has been thought out to the finest detail. All flights are now operated from the new airport, and public transportation routes have been extended to it. Near the old airport there is still a bus station, from which you can go to resorts.

You can get to any part of Crimea from the airport by public transport, cab or by renting a car.

If the trip by cab is more convenient for you, we advise you not to waste time bargaining with local bamblers, and pre-book a transfer on the website Kiwi Taxi – it will come out cheaper and easier. They take to Evpatoria for 1900 rubles per car (4 places), and to Yalta – from 2100 rubles. You can choose a car of a higher class.

On a side note:

Where are you going?

Central bus station. Bus number 49 will take you from Simferopol Airport to the Central bus station (address: Kievskaya, 4). From there you can go to any large city of Crimea: Sudak, Sevastopol, Kerch, Yevpatoria, Yalta and so on by long-distance buses. Travel time – about an hour, the interval of movement – 10 minutes, the fare costs 17 rubles.

READ
The truth about the New World. Reviews on vacation - 2022

With all the routes in Simferopol and other cities can be found in the application “Yandex. Transport” application and on the website of EasyWay – there you can lay a route and find out what transport runs, how much the fare is, how long it takes to get there, and at what stop you have to get in and out. Very convenient! You can select the desired city under the site logo in the upper left corner.

Night routes. There’s route 49A, but it doesn’t go through the bus terminal, its terminus is in Trenyov park (Samokisha str.).

Cab parking is situated in front of the airport building. You can either pick up a cab on your own or order one ahead of time (at Kiwi Taxi). The control room is in the arrivals hall. Cab fare: 22 rubles per kilometer. You can take a cab to the city as well as to other Crimean resorts.

If you plan to travel around the peninsula, rent a car at the Simferopol airport. We advise you to use the Localrent.com website – it is a reliable and convenient car rental service that we use ourselves. There’s a large selection of cars and convenient service. The cost of renting a car from 1000 ₽ per day. Learn more about car rentals in the Crimea and travelling by car. 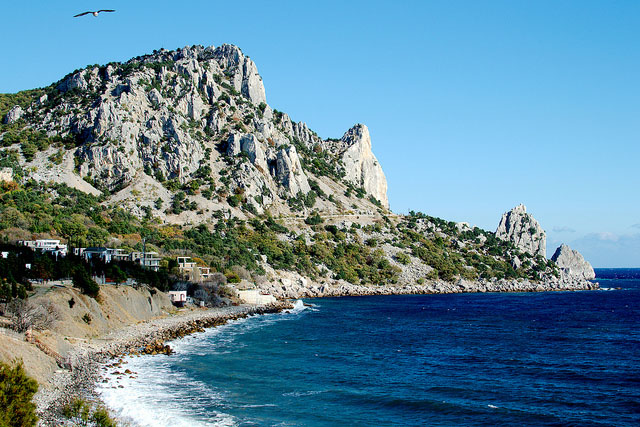 Driving from the airport to Crimean resorts

From the old airport of Simferopol it is easy to get to some cities and resorts of Crimea – for example, Bakhchisaray, Sevastopol, Evpatoria, Yalta, Alushta, Feodosia and so on. The bus station is located at the old terminal, next to the trolleybus station at the ring – that’s where the buses leave from. You can get there by buses #77 and #49. Check the schedule of buses from the airport to the resorts on the official website. Tickets are sold at the ticket office or online, but you need to register on the website.

Below consider the public transport routes by which you can get from Simferopol Airport to Yalta, Alushta, Sevastopol, Evpatoria, Feodosia. These are less convenient ways and sometimes you will have to make a change.

Simferopol Airport – Yalta and Alushta: how to get there

The easiest way to get to/from Simferopol Airport to Yalta or Alushta is to take an intercity trolleybus № 55 that goes from/to the airport through the railway station. It runs every half hour, the travel time is about 3.5 hours. Route number 55 makes stops in the following points: Alushta – Maly Mayak – Partenit – Zaprudnoe – Krasnokamenka – Gurzuf – Nikitsky Botanic Garden – Massandra. Also to Alushta goes trolleybus number 54 and repeats the route of trolleybus number 55.

The second option – by changing at the bus station “Kurortnaya” in Simferopol: go from the airport to her above by public transport (bus number 49, etc.), and then take a trolley to Yalta (number 52, 55) or Alushta (number 51, 52, 54, 55). Between Yalta and Alushta there is a trolleybus number 53.

Simferopol-Sevastopol airport: how to get there

From the airport to Sevastopol is very easy and simple to get to, there are many options for every taste.

Busses: There are direct buses between the old airport and bus stations in Sevastopol, the trip time is about 2,5 hours. The bus station is located at the airport, next to the trolleybus station. Busses to Sevastopol run frequently (and every day) from 5:20 to 22:20. Also you can go first to the Central bus station or bus station “Kurortnaya”, and then by bus to Sevastopol, but no special sense in it – buses are still coming to “Kurortnaya”. Tickets cost from 150 rubles, you can buy at biletik.online.

Airport of Simferopol – Evpatoria: how to get there

From Simferopol to Evpatoria you can, as in the case of Sevastopol, get both by bus and by train. Buses from the old airport run from 8:10 to 21:58. The trip will take you 1-1,5 hours. The cost of tickets is about 100 rubles.

Simferopol airport Feodosia: how to get there

Buses from the bus station of the old Simferopol airport to Feodosia depart from 5:40 to 20:30 daily. Their choice is huge – a lot of transit routes passing through Simferopol. Travel time is about 2.5-3.5 hours.

In addition, you can take a cab, so it will be faster and without changes (about 1.5-2 hours), but a little more expensive – though if you go with a company, the difference with the price of travel by bus will not be great. The car is better to order in advance on the service Kiwi Taxi (on the spot will be much harder to agree on a good price).

The Crimea is not only resorts and beach vacations, but also steppes, valleys and most importantly, mountains. Enjoy a breathtaking video of the Valley of Ghosts in the Demerdzhi Mountains: