The Athenian Agora was the center of social life for the Athenians in ancient times.The word “Agora” comes from the ancient verb “agiro,” which means to gather and orate, that is, public speaking. It was part of daily life in ancient Athens and also the base for administration, justice, commerce and business.

It was an ideal place for meeting and fostering the spirit and social intercourse of the Athenians. In other words the Athenian Agora was the heart of the ancient city.

Today, the Agora is an open-air museum and you can stroll around for hours, amidst the many sights. A particularly beautiful scenery awaits the visitor in spring, when the whole area is in bloom and fragrance.

Diagram of the main structures of the Agora

The 10 Great Attractions in the Athens Agora

More places of interest in Athens

For thousands of years the Acropolis has been a symbol of Athens, a sacred rock, a link that connects the splendor of ancient Greek civilization with modern… Read more

The temple was built of marble from Mount Pantelos. Its length is 96 meters, and its eastern and western facades are 40 meters … Read more

READ
The best beaches in Rhodes and hotels by the sea

It is one of the best museums in the world, featuring masterpieces of ancient Greek art associated with the Acropolis of Athens … Read more

The hotel is located in the historic district of Athens, directly opposite the Temple of Zeus the Olympic and Hadrian’s Arch. Read more

Book with an exclusive 5% discount from Grecomania

The hotel is conveniently located right at the foot of the Acropolis, a stone’s throw from the New Museum and world-class archaeological sites. Learn more

In the heart of Athens, in the Psirri neighborhood, an industrial building is transformed into an urban art hotel, The Artist Athens. Read more 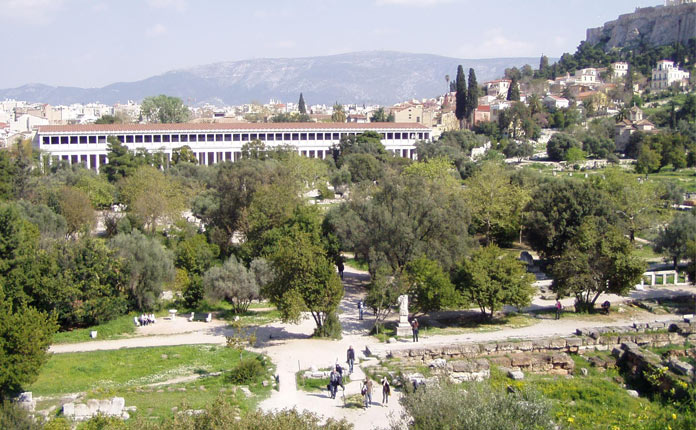 The Agora was the center of ancient Athens. The Agora was the center of ancient Athens, where citizens gathered to discuss important issues, elections were held, and speakers made speeches. The Agora was where criminals were tried and trade was lively. The Athenian agora was the site of many public buildings such as the library, the temple, the odion, the mint and more. Not much has survived to this day. Today the Athens Agora is visited by many tourists who are interested in the history of the ancient Greeks. A brief description and photos of the Agora can be found in all travel guides to Athens. 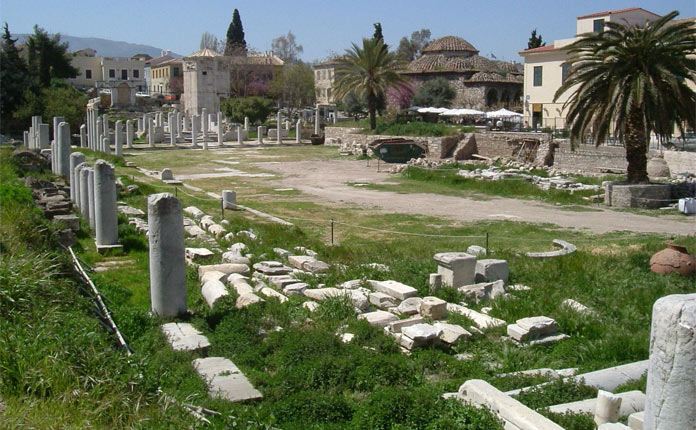 Where is the Athens Agora

The archaeological park is located in the center of Athens.

Take the subway to Monastiraki or Fision station. Then walk about 7-10 minutes.

History of the Athens Agora 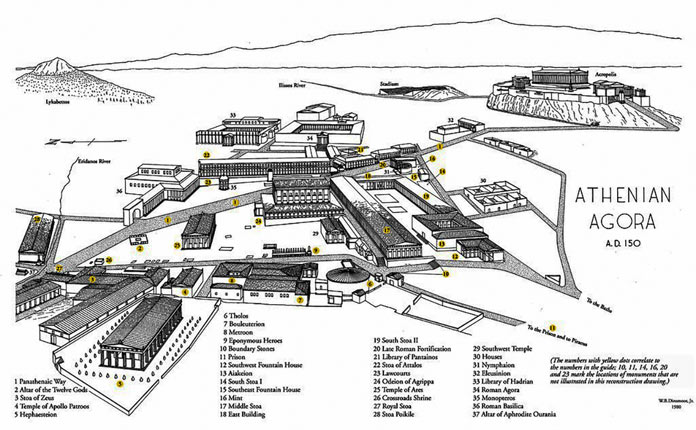 Excavations in the Agora have shown that the site has been inhabited since about the 17th century B.C. Burials from this period have been found.

The Agora was of great importance in the 6th century B.C. It was at this time that public buildings began to appear here. Some historians consider that the first ones built here were the house-fountain and the altar dedicated to the 12 gods.

This is interesting. The altar dedicated to the 12 gods was kilometer zero. Historians claim that the altar was the geographic center of Athens.

In V century BC Athens is occupied by the Persians. Many of the city’s structures are destroyed, including the Agora. After the war, new buildings are erected.

In the 4th century BC Athens was captured by Alexander the Great. After his death his viceroys were expelled from the city and independence was restored. During this period, schools of philosophers opened, with Plato, Epicurus, Aristotle and others as their founders. The agora was actively built up, the middle and southern galleries and the famous Stoa Attala were erected.

In the first century BC the Roman general Lucius Cornelius Sulla conquers Athens. His army sacked the city. Many buildings were destroyed in the Agora, and they were not rebuilt. But around this time several new structures were built – temples, odeon.

Athens was actively developed under the reign of the Roman Emperor Hadrian, who had great respect for the history and culture of Greece. Under him were rebuilt the stadium and the theater of Dionysus, completed the temple of Zeus the Olympic. In the Agora was set up a monument to the emperor, it is partially preserved.

In the III century BC the next conquerors – the Gerul tribes, destroyed Athens. The city buildings were badly damaged. The Agora was the front line of defense, which could not but affect its condition. Now this place was not the center of the city, and in place of the destroyed structures began to build houses.

In the 6th century Athens survived the attack of the Southern Slavic tribes, after which the Agora was abandoned and abandoned until the 10th century . At that time the temple of St. Apostles was built, which survives to this day.

The excavations in the Agora began in the middle of the 19th century. By that time little remained except foundations and ruins. Part of Agrippa’s odeon, an altar to the 12 gods, the remains of several temples and the boulephtherium were found. A more serious study began in 1931 by American specialists. They demolished four hundred residences that interfered with the excavations, and several churches and other buildings.

Today, the Agora is a popular Athenian landmark. Nothing has survived here in its original form of ancient buildings (except one temple). But every stone in this place breathes history. Let’s take a closer look at the most interesting monuments of the Agora and find out what’s left of them.

According to Wikipedia, the dimensions of the altar are 9 m 35 cm by 9 m 86 cm. It is unknown exactly what gods were worshipped here. They found the ancient altar by accident when they started building the railroad. Most of it is under the railway bed. You can see only a corner of the structure.

The presumed date of construction is 530 B.C. Fresh water was delivered here. It was piped from the house to the other buildings. 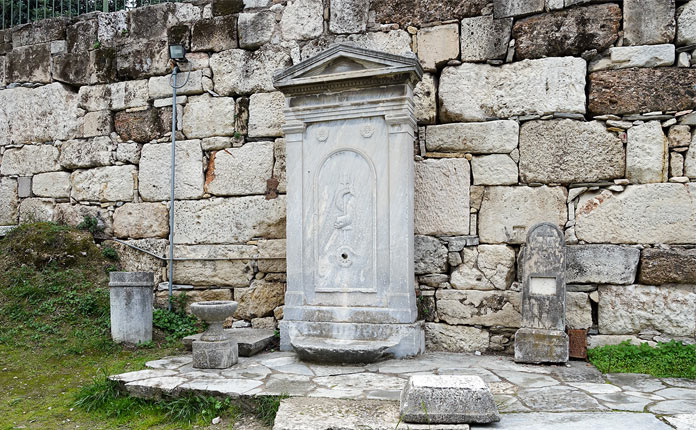 The road is in good condition. It is fairly wide at 15 m and not very long at nearly a kilometer. The road was unpaved. When the top layer became unusable, it was filled in and tamped down. Six dozen layers were found. 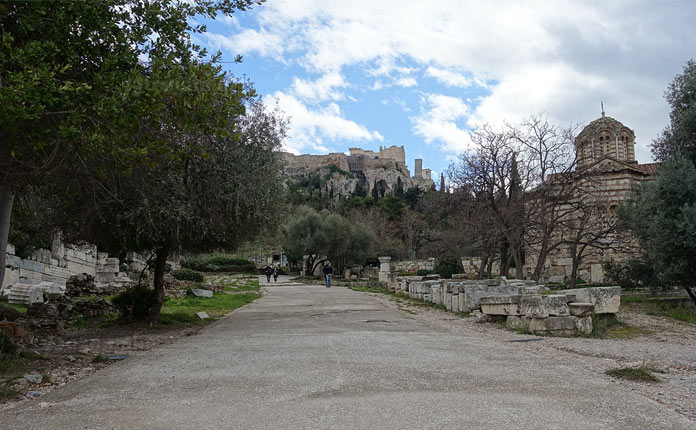 In the second half of the V century the Tolos was built. It was a circular construction (18 m in diameter). The roof was in the form of a cone. This building was built specifically for the town council of 500 people. They were divided into ten groups, and each group was occupied for 35 days. These people dealt with the problems of the town round the clock, working in shifts. The council was elected every year and had to be accessible to every citizen of Athens at all times. Today the ruins of Tholos are left. 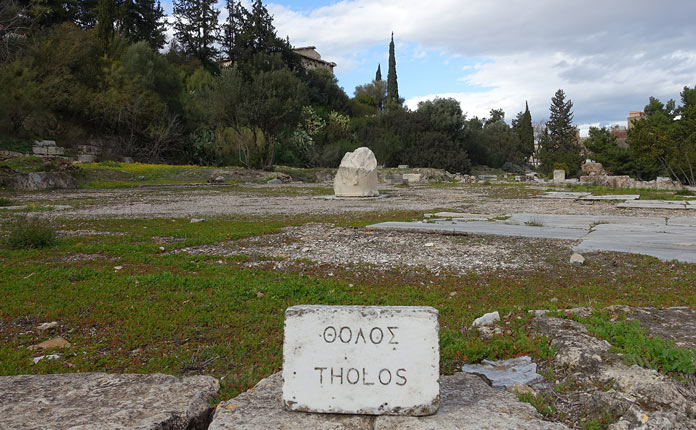 The Temple of Hephaestus

The temple was built in the 5th century BC It is the only structure of the Agora and Athens that has survived in its original state. All columns, pediments and roof are preserved. Since the 7th century there was a Christian church in the temple. That is why the structure remains intact. Our website has a detailed overview of the temple of Hephaestus. 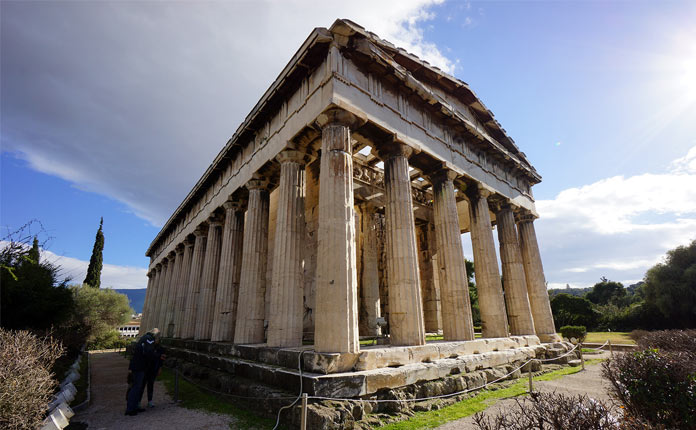 Stoa is an ancient “trading center.” The buildings were erected in one or two stories. Three of the walls of the structure were blank and a portico-colonnade was built on the facade. People came to the stoa not only to trade but also to walk around. The Stoa of Attalos was built in 159 BC. It was a gift to Athens from the ruler Attalos of Pergamon. The building was massive, its dimensions: 115 m long and 20 m wide, the columns were just under 5 m high. On each level there were 21 rooms for trade. The structure was completely destroyed during the raid of the Herul tribes. The ruins that remained were used as the foundation of defensive walls. 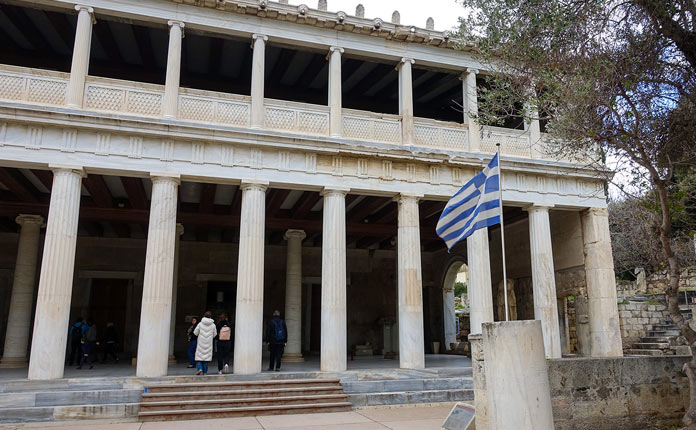 During excavations at the end of XIX century archaeologists discovered the remains of Stoa. In the 1950s the structure was rebuilt, or rather built anew, as it was before the destruction. The money for this project was given by the Rockefellers. All that is left of the ancient Stoa Attala is its foundation and fragments of the colonnade. The rebuilt structure houses the Agora Museum, where the artifacts found during the excavations can be viewed. The exposition is located on two floors. The exhibits are divided by chronology from the VII century BC to the XVII century. Here you can see a variety of items: ancient children’s toys; jewelry; household and religious items; coins; amphorae and other exhibits. On the second floor there are sculptures. According to the reviews of tourists, the museum is small, but interesting.

READ
When is the best time to relax in Greece? Weather and seasons by month

It is interesting. In 2003, in Stoa Attala was signed a document on the accession of 10 countries to the European Union. Among the signatories were the Baltic States, Malta, Cyprus and several Eastern European countries.

In ancient times it was a large concert hall with a capacity of 1,000 people. In the year 150 the roof collapsed and the odeon was reconstructed. It was at this time that the statues of the giants, preserved to this day, were installed. The foundation, fragments of columns and part of the walls have also been preserved. After the reconstruction, the odeon was not used as a concert venue, and orators and philosophers made speeches there. 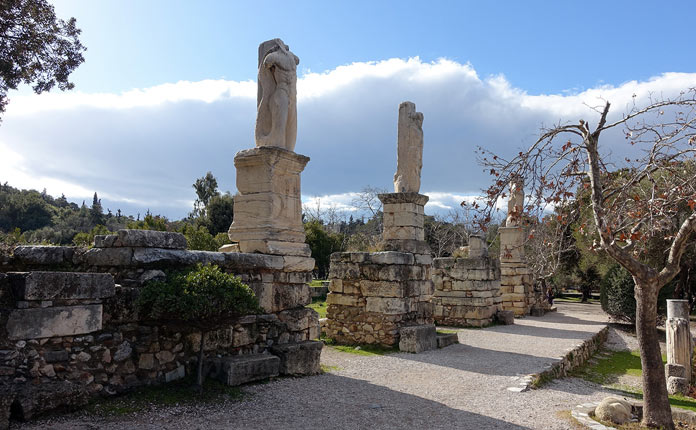 The Church of the Apostles

Byzantine church was built in the X century. Today it is considered one of the oldest Christian shrines in Athens. All the structures that were built in the Agora after the Roman period were demolished except this temple. In 1954, the church was restored. All outbuildings added after the 10th century were removed and the frescoes were mothballed. 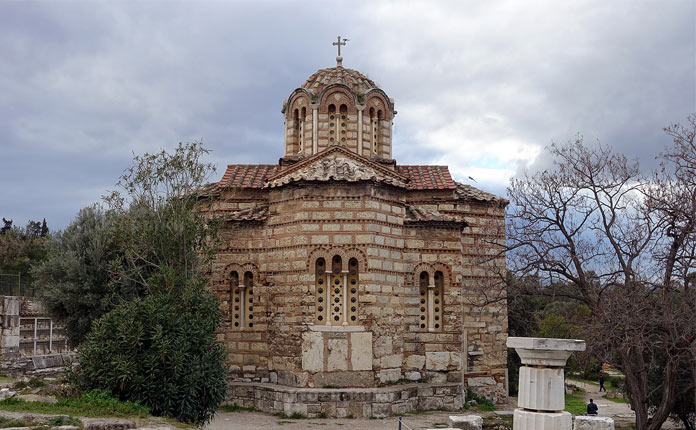 What else was in the Agora?

The Agora was a place where public buildings were located. In addition to the above-mentioned structures, there were other structures: several stoa, temples, an arsenal, a prison, a mint, a library, a fountain, and gates. And it’s not a complete list. Unfortunately, almost all of these buildings have reached our time in the form of ruins. Although even “ruins” is a strong word. From many buildings only peeking out of the ground stones are left.

READ
Rhodes or Crete: Where should I vacation in 2022?

What to see nearby

✓Tripster is the largest online tour booking service in Russia.

✓Travelata.ru – search for the most profitable tours among 120 reliable tour operators.

✓Aviasales.ru – search and compare airfare prices among 100 agencies and 728 airlines.

✓Hotelook.ru – hotel search engine around the world. It compares prices from many booking systems, finding the best.

✓Airbnb.ru – the world’s most popular landlord rental service (often more convenient and cheaper than a hotel). Follow this link and get a gift of $25 for your first booking.