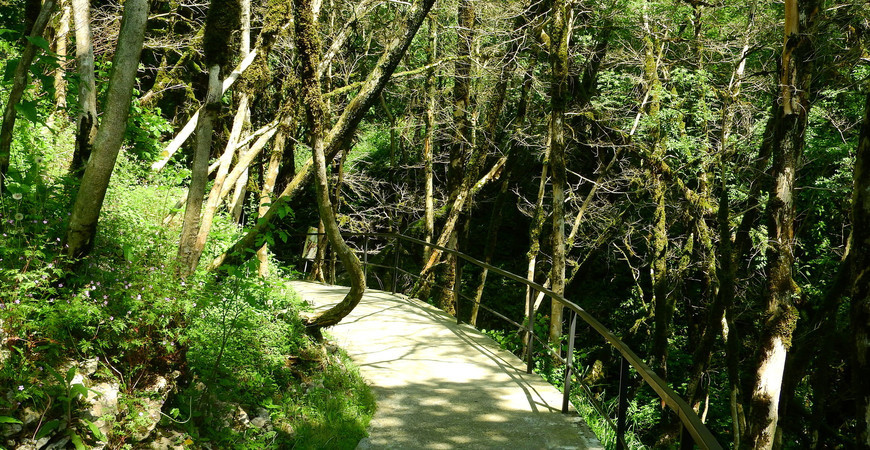 Yew-Box Grove in Khost is a unique protected area within the K.G. Shaposhnikov Caucasian Biosphere Reserve. These relic forests scattered over the area have remained practically unchanged since preglacial times – these very plants covered Europe about 18-25 million years ago.

The main representatives of the flora of the grove are yew berry, which grows up to 10-20 meters and is called a red tree by the color of its wood, and the evergreen box tree of Colchis (from 2 to 12 meters). There are more than 70 species of trees in the green bushes of the grove, the age of the oldest of which exceeds 2000 years. All in all more than 400 species of plants grow in this zone of the reserve under UNESCO protection. The fabulous fern and liana landscape is complemented by tropical flower mushrooms, rocks and rifts, and turquoise-blue waters of the mountain river.

Animals in the Yew Tree Grove are rare, with the exception of lizards, hedgehogs, and birds. Information posters in the park inform that the territory is inhabited by representatives of the fauna of the Caucasus Biosphere Reserve: foxes, wild boars, roe deer, jackals and Kuban wolves. Naturally, wild animals do not appear in the vicinity of tourist trails.

When visiting the Yew-Box Grove, you should carefully choose a place for a picnic – there are snakes on the territory of the reserve. Curled up in a ball, they almost do not stand out against the background of rocks.

It is interesting to visit the site at any time of the year, even in winter: already in February, the first spring flowers – wild cyclamen – bloom in the Yew-Box Grove. In summertime tourists are much more, but you can swim in the river Khosta. In autumn and mild spring it is especially pleasant to organize long picnics – the weather is not hot, but it’s not cold either.

Boxwood in Khostinsky Yew-Box Grove was destroyed by an infestation of moth ragweed, imported to the region with Italian seedlings – in preparation for the Olympics in 2014. Restoration planting is being carried out in the mountainous areas. For the state of the attraction now, check out our recent reviews of the Yew-Box Grove.

Entrance to the Yew-Box Grove is paid – according to the official price list of services of the Caucasian Biosphere Reserve.

The circular routes begin and end at the entrance to the grove. On the “Small ring” you can see the Landslide Gully, the Labyrinth, the White Rocks, the Yew Giant, on the “Big” to the already mentioned attractions (except the Yew Giant) are added Deep Gully, Beech Glade, Ancient Fortress, the river Khosta and spring, cave, rest place “Zub”.

The route “Into the depths of centuries” begins from the Devil’s Gate Canyon, leads along the canyon of Khosta to the ancient fortress, and then to the exit of the grove.

Attractions on the route

The grove is beautiful on its own, but the sights make a walk through the ancient forest like an expedition, making the route entertaining and informative at the same time.

Other attractions include numerous gullies (the name of the ravine with sodden slopes) with picturesque vegetation and mini waterfalls, unique samples of perennial trees, suspension bridges like from adventure movies.

READ
Honestly about Olginka. Reviews about rest and prices - 2022

How to get to Yew-Box Grove

It is very easy to get to the Yew-Box Grove on your own. Walk about 3 km from the center of Khosta to the grove. To get to the checkpoint on the territory of the nature park takes about half an hour from the Khosta railway station. Buses to the Tiso-Samshita Grove stop a little closer.

There are different ways to get from Sochi to Hosta. Suitable buses are №50, 105, 115 to the bus stop “Most”, then walk 2.5 km. The timetable is given below. It’s about 25 km by car, if there are no traffic jams, you can get there in 40 minutes (in summer in high season much longer).

Excursions to the Yew-Box Grove

You can visit the protected Yew-Box Grove not only by yourself but also with organized excursions for groups or with private guides. In that case you will be able to see other sights in one trip, for example, to visit the mountain Akhun (Yew-Box Grove is located on the south-eastern slope of the mountain).

Cab to the Tiso-Samshitovaya Grove from the resort areas of Greater Sochi will not be cheap. You can save on a trip with a private driver by ordering a car through mobile apps. In Sochi you can order a cab through: Yandex.Taxi, Uber, Gett, Taxi Veset, Maxim.

Yew-Samshit Grove is a great option to see the nature of the Caucasian forests in civilized conditions – the reserve is equipped with comfortable trails. It is also a great option for those who want to hide from the heat in summer.

Yew is a tree that can reach 27 meters in height, and the thickness of the trunk up to 1.5 meters. The peculiarity is that red berries grow on this coniferous tree. Yew – a branch with a berry

Boxwood may be familiar to our citizens, as it is often used as an ornamental shrub. The density of its wood is greater than that of water, so it sinks. In the reserve, the Colchis boxwood reached a height of 10 meters. I did not make a mistake when I wrote the previous sentence in the past tense. The fact is that for the 2014 Olympics saplings of boxwood evergreen were brought to Adler. The sanitary doctor examined them and found unfamiliar caterpillars. They turned out to be boxwood fireworms – parasites that had never been seen in the Caucasus before. The doctor issued an order that these plants must be burned to prevent the spread of the dangerous pest. But the Olympics are the main thing here. Therefore, the seedlings were not destroyed, but only treated with chemicals. Larvae caterpillars easily survived such treatment, multiplied throughout the Caucasus, devouring all boxwood in the grove. Small pieces of live trees for 2020 remained only in Adygea and Abkhazia. Therefore today you can see only dry remains of this rare tree overgrown with moss in the reserve. The sight is quite terrifying – reminiscent of the terrible forest from “The Lord of the Rings.

READ
Akhshtyrskaya cave: how to get there, prices, our review and photos Forest from a scary fairy tale

The fate of the yew tree is also questionable. Locals say that the death of boxwood has significantly reduced the moisture content of the soil. Centuries-old trees are withering away. And indeed – we saw berries only on one tree near the entrance, on the bank of the river. Thickets of this rare plant can not be restored at once – the height of 2 meters they reach in 70 years. The only hope is that some other plant in the Yew-Samshit grove will take the vacated niche and create the necessary humidity for yew survival. Despite such a sad story, a trip to the grove is still worthwhile. For tourists there are Small and Big routes. Small route is not very interesting – it is just a circle in the woods. But it can be overcome even by ladies in stilettos – the path is paved with concrete.

Big route is more interesting – it lies along Yew-Samshitovaya Grove and runs along Khosta River. Its length with the branch to the Devil’s Gate Canyon is about 6 kilometers. Scheme of routes through the Yew-Box Grove

But it can be passed only by people with good physical training, athletic or hiking shoes are desirable. Duration is 3.5-4 hours. The thing is that these 6 kilometers walk almost entirely by stairs. There are fences along the route and it is quite safe. Hiring a special guide is not required.

Some tourists swim in the Khosta River near the Devil’s Gate. But keep in mind that the water temperature even in summer is no more than 15 degrees. Yew and boxwood grove is located on the southeastern slope of the mountain Akhun in 2.5 km from the Black Sea and is part of the Caucasus Biosphere Reserve. The grove can be called a museum of wildlife, a unique place where many plant species have survived since preglacial times.

READ
Prices in Anapa - 2022. How much does it cost to rest. How to save money

Here you can see relic Colchis forest inhabited by rare animals and growing trees, herbs and bushes included in the Red Book.

How to get there